Get to Know Ubisoft Bordeaux, the Studio Behind Assassin's Creed Mirage

Nestled in the heart of one of the most picturesque regions of France sits Ubisoft Bordeaux. Spanning two buildings along the Garonne River, the Ubisoft Bordeaux studio brings together over 420 team members from more than 20 nationalities helping develop some of Ubisoft’s most popular AAA titles. Over the past five years, the studio has expanded to include tech and research and development (R&D) divisions, cementing its place as a leader in European game development.

The Ubisoft Bordeaux studio recently celebrated its fifth anniversary with a visit and talk from Ubisoft’s executive staff, including Ubisoft CEO and co-founder Yves Guillemot. For the event, studio team members heard about project updates and hosted an outdoor party with local food, a live band, axe-throwing, laser tag, karaoke, photobooths, and plenty of dancing!

Follow along to learn more about the studio and hear from two of its team members as they discuss their favorite aspects of the studio and their preferred ways to collaborate and kick back with their colleagues. 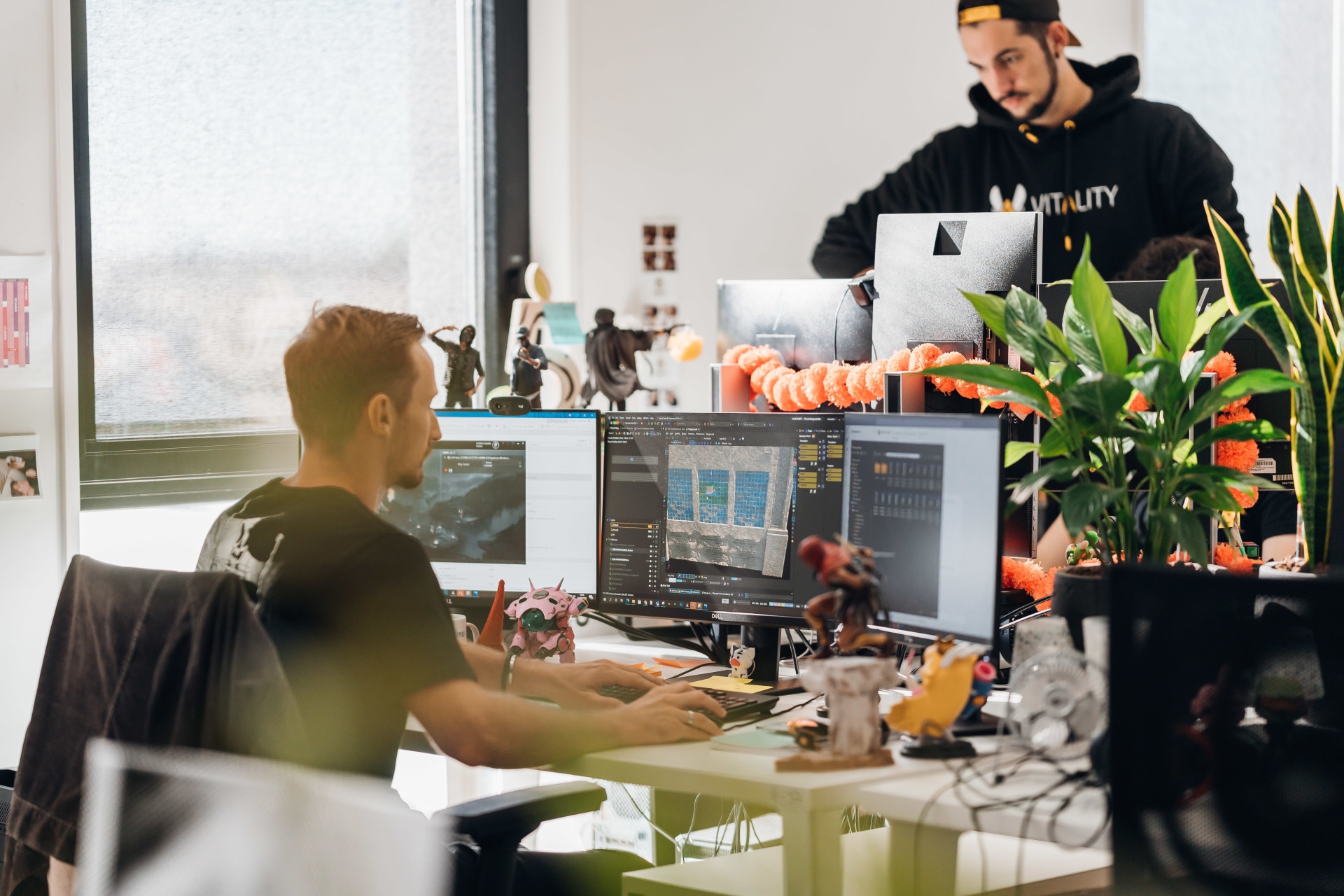 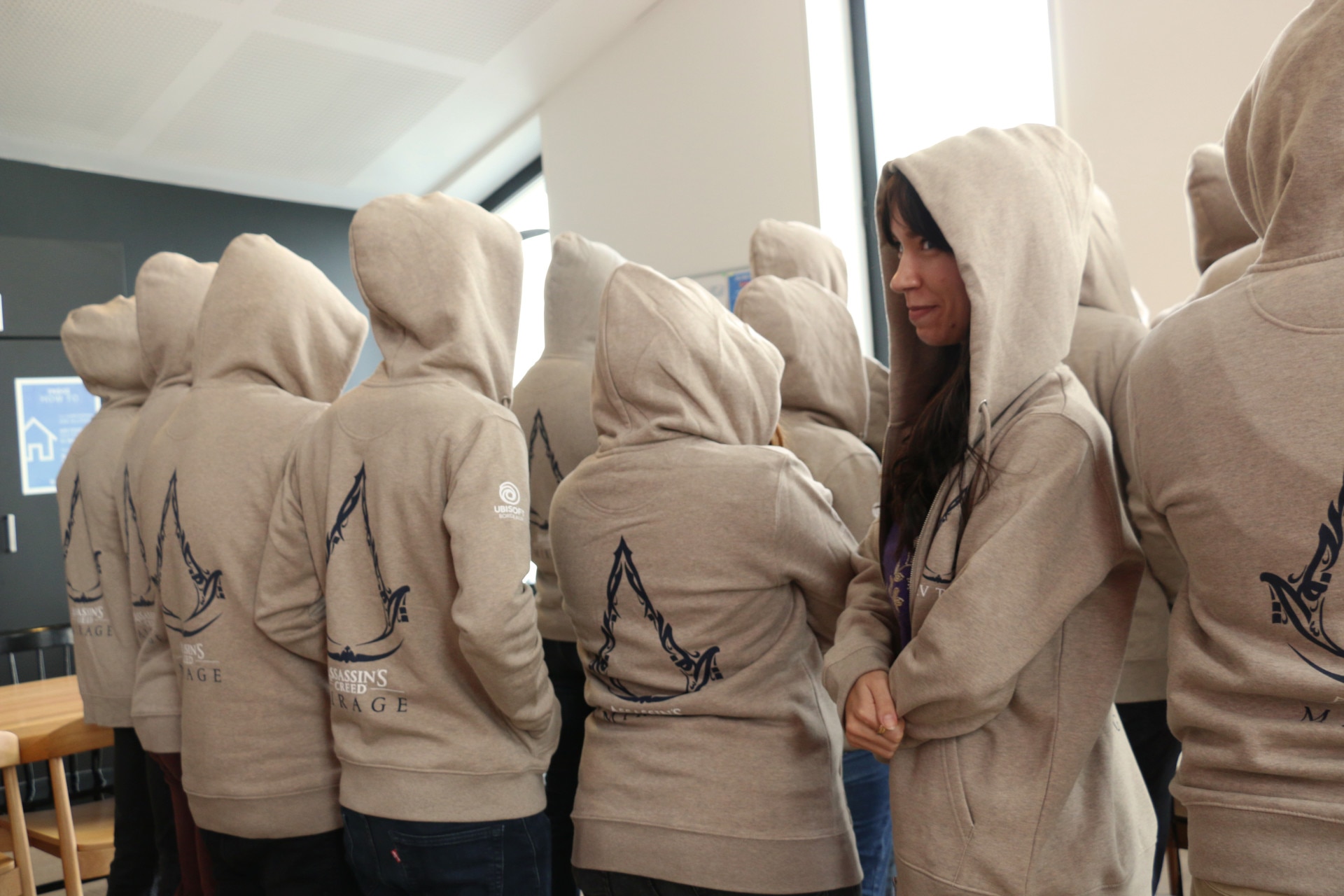 Ubisoft Bordeaux’s tech division is responsible for some of Ubisoft’s most cutting-edge technological advances, including improvements and maintenance of Anvil, one of Ubisoft’s core game engines. Originally created for the first Assassin’s Creed game, Anvil has helped to streamline the entire game creation process from development to testing. Since its creation, the engine has been utilized for dozens of Ubisoft titles, including Rainbow Six Siege, Riders Republic, Assassin’s Creed Valhalla, and Immortals Fenyx Rising.

Ubisoft Bordeaux is also home to a local Ubisoft La Forge branch. Focusing on R&D and acting as a bridge between academic research and video game production, La Forge combines Ubisoft’s assets and data with the expertise of university researchers to drive innovation in the video game industry and solve real-world problems through scientific publications. At Bordeaux, the La Forge team includes students, researchers, and research engineers who work with the studio’s game production teams to optimize the entire game development process. Currently, the La Forge teams in France are working to streamline processes for implementing deep neural networks in game physics, rendering, and level generation. 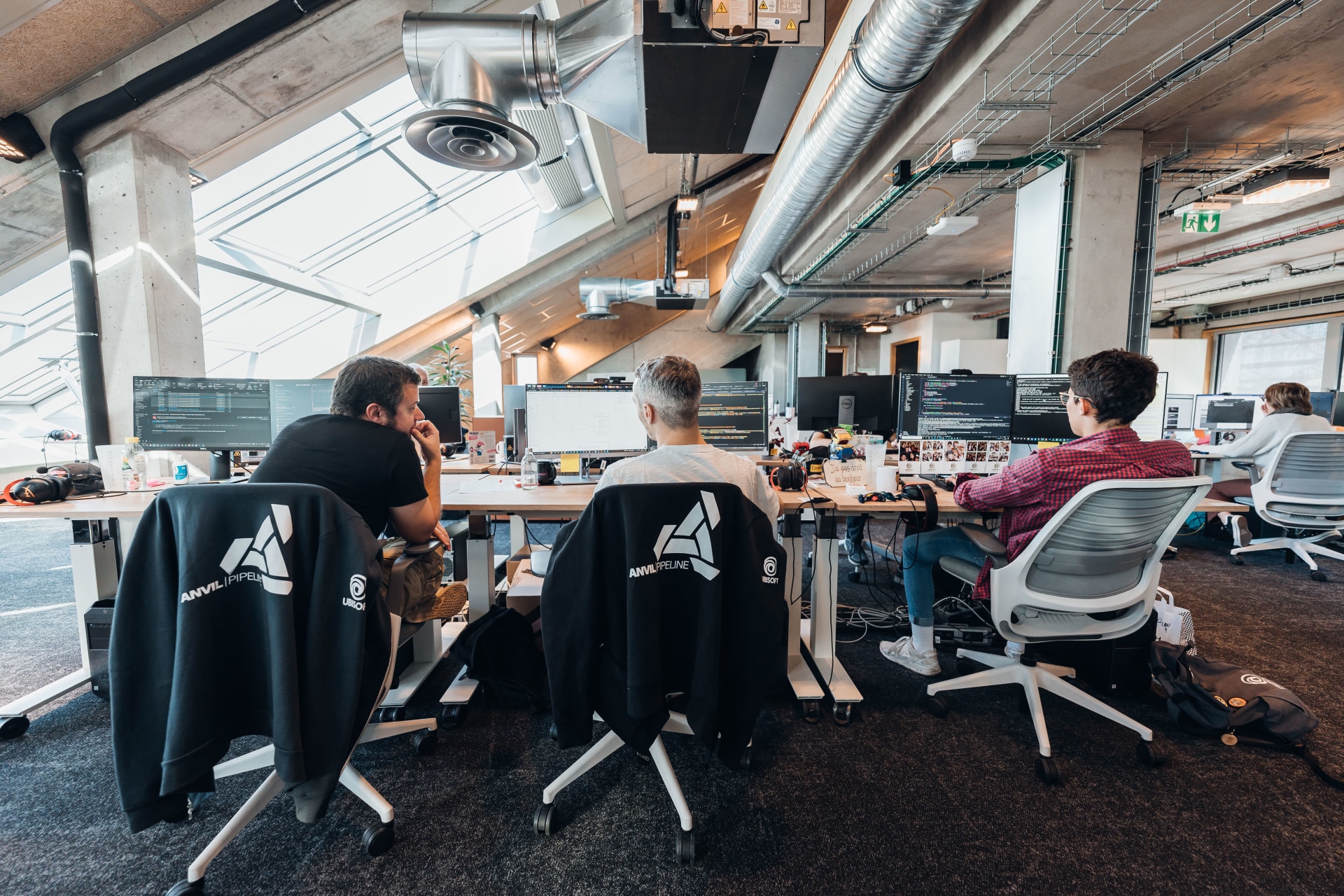 Beyond creating AAA titles and maintaining its technological divisions, Ubisoft Bordeaux is exploring even more exciting player experiences through its free-to-play games, cross-platform support, and PvP titles. The team has partnered with studios around the world to create some of Ubisoft’s most recent releases, including Wild Arena Survivors, a new battle royale mobile title set on an exotic island teeming with wildlife.

In 2024, The Ubisoft Bordeaux studio will move to its new location in a new, eco-friendly building made specifically for Ubisoft! The new building will not only house team members from all projects and groups under one roof, but Ubisoft Bordeaux has committed to a certain degree of energy conservation, including utilizing solar panels and recovering rainwater for watering plants in and around the studio. With the move comes a greener outlook and even more Bordeaux studio innovations in technology and R&D for use in future titles. 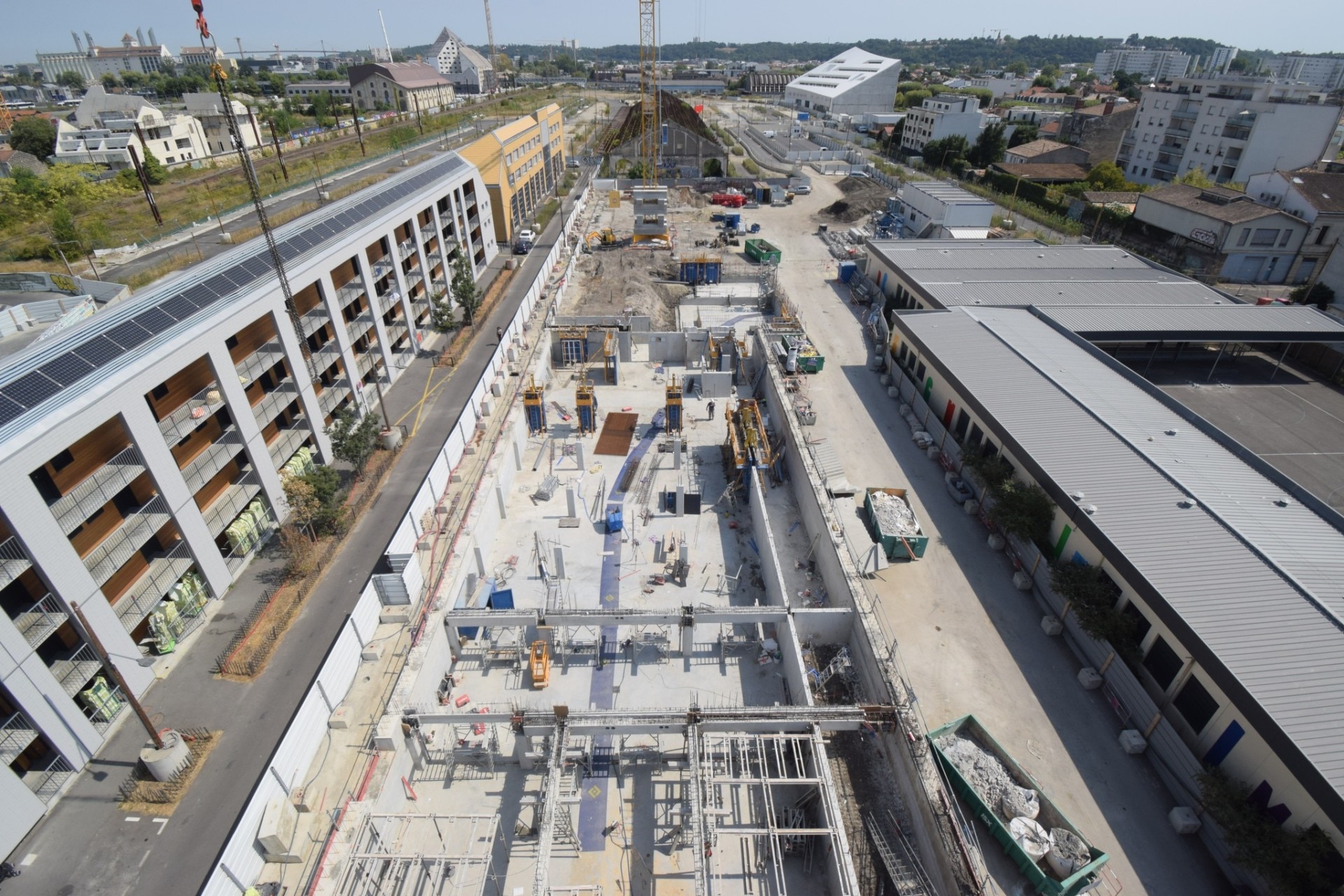 Ubisoft Bordeaux isn’t waiting until the move to begin their green initiatives, several of which have already been put in place to promote recycling and composting of everyday waste. These measures are in partnership with local waste management organizations, including ACTES ELISE Atlantique, a collection, sorting, and recycling service with an aim to reduce worldwide waste and provide hundreds of jobs around Bordeaux. The studio also partners with Les Détritivores, a Bordeaux-based organization dedicated to creating compost from leftover food scraps. Additionally, several awareness campaigns are carried out each year to commemorate the importance of these efforts, including regular visits to the ELISE recycling center, clothing donations, bicycle repair workshops, and games and quizzes hosted by the studio to celebrate Earth Day. Ubisoft Bordeaux also hosts a chapter of Ubisoft’s Green Force Club – an internal, member-run group exchanging ecological subjects, ideas, and best practices, including hosting DIY workshops, talks about low-waste living, beachside trash collection, and ethical travelling. The Ubisoft Bordeaux studio also has a long history of involvement in educational initiatives around technology and the videogame industry. More than 30 studio team members have been involved in Youth Fusion, an organization dedicated to elevating levels of retention, orientation, and employability for high school students in France. The studio is also a member of the SO Games Association: The Bordeaux studio worked with other tech companies in the region to create the SO Games Association START Days, an event that brings together local students who are starting high school with video game professionals to discuss career possibilities in the gaming industry around the Nouvelle-Aquitaine region. Additionally, Ubisoft Bordeaux has partnered with Kids Code Jeunesse, an organization dedicated to providing access to digital outlets and education for children in impoverished communities. This April, Ubisoft Bordeaux also hosted a high school class from the Lycée Sud Médoc as part of their ongoing partnership with Elles Bougent pour le Numérique, an event dedicated to sharing information with young women interested in working in the tech and gaming industries. 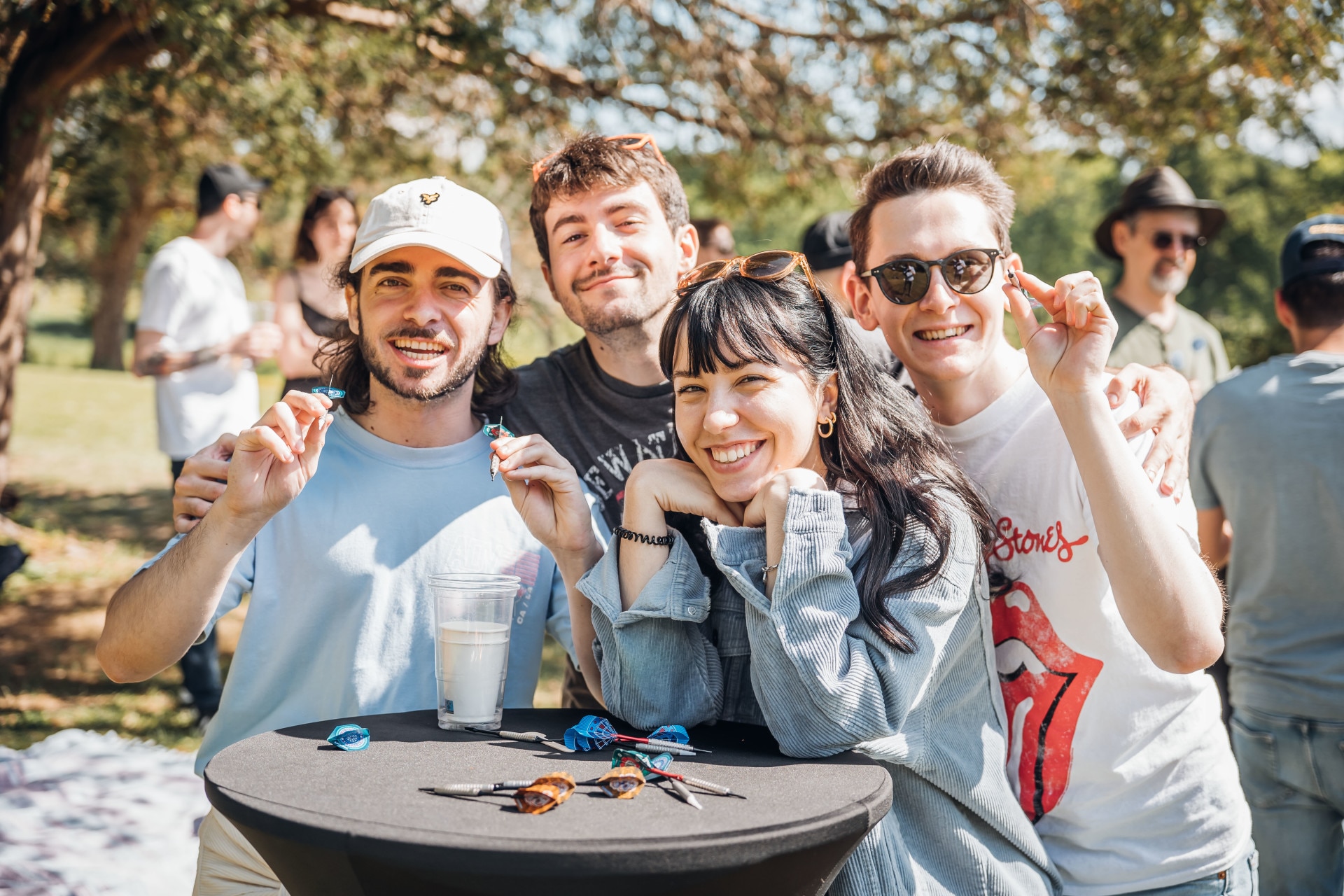 Let’s Hear from the Team La Forge Innovation R&D Team Coordinator Simon Contraires has been at the Bordeaux studio for three years, during which he’s helped develop the La Forge team at Ubisoft Bordeaux and run its research and innovation initiatives. Contraires’ team focuses on applying innovation by research for multiple disciplines, including rendering and level generation, as well as bots to improve Ubisoft’s game AI, machine learning, and reinforcement learning efforts.

What are some of your favorite projects you’ve worked on recently? Simon Contraires: La Forge does a lot of interesting work with bots. For example, one project we’re working on concerns bots that replace players who log off during a multi-player session. My team studies ways to ensure the bot plays in a style that isn’t too scripted or awkward. We’re also always working to optimize the models that are produced from our machine learning algorithms to control bots. For multiplayer games, this is a huge undertaking, so we often reach out to students and researchers for their input. That’s what’s great about working with La Forge: We have that connection with those resources around the world.

What about the Bordeaux studio inspires you creatively? SC: Ubisoft Bordeaux is a very ambitious studio, and we have a very strong focus on technology and innovation that attracts team members with diverse skills and knowledge. It’s great to always have team members with specialties different than your own that you can rely on when you need help on a particular project.

Who has the coolest desk at the Bordeaux studio? SC: Definitely me! I love being able to sit near a window, and I can actually see the construction site of the new studio from my desk. Of course, the best part is having photos of my kids and family, and even some figurines of my favorite Ubisoft characters on my desk.

What’s the best internal Bordeaux studio event you participated in? SC: We just had our annual meeting where we heard presentations from studio and group management and watched a video of fun throwback moments. Of course, there were serious parts of the meeting, like the Q&A session and slideshows, but the party afterwards was very fun. It was so nice to spend time with everyone outside of work. I believe about 350 team members from different groups attended the party. It’s also very inspiring to talk to Ubisoft management. We have very strategic goals to achieve, and it makes me excited about the future of the studio.

What is your favorite way to foster teamwork among your fellow team members? SC: It’s nice to collaborate with different groups and teams within the studio to create a final project. Sometimes, people aren’t aware of everything the production team can offer and sometimes we’re not aware of other projects happening around the office. If possible, I like to take time to learn from other groups about their upcoming work and how they do things. Usually, this ends in intense brainstorming sessions that initiate great collaboration. 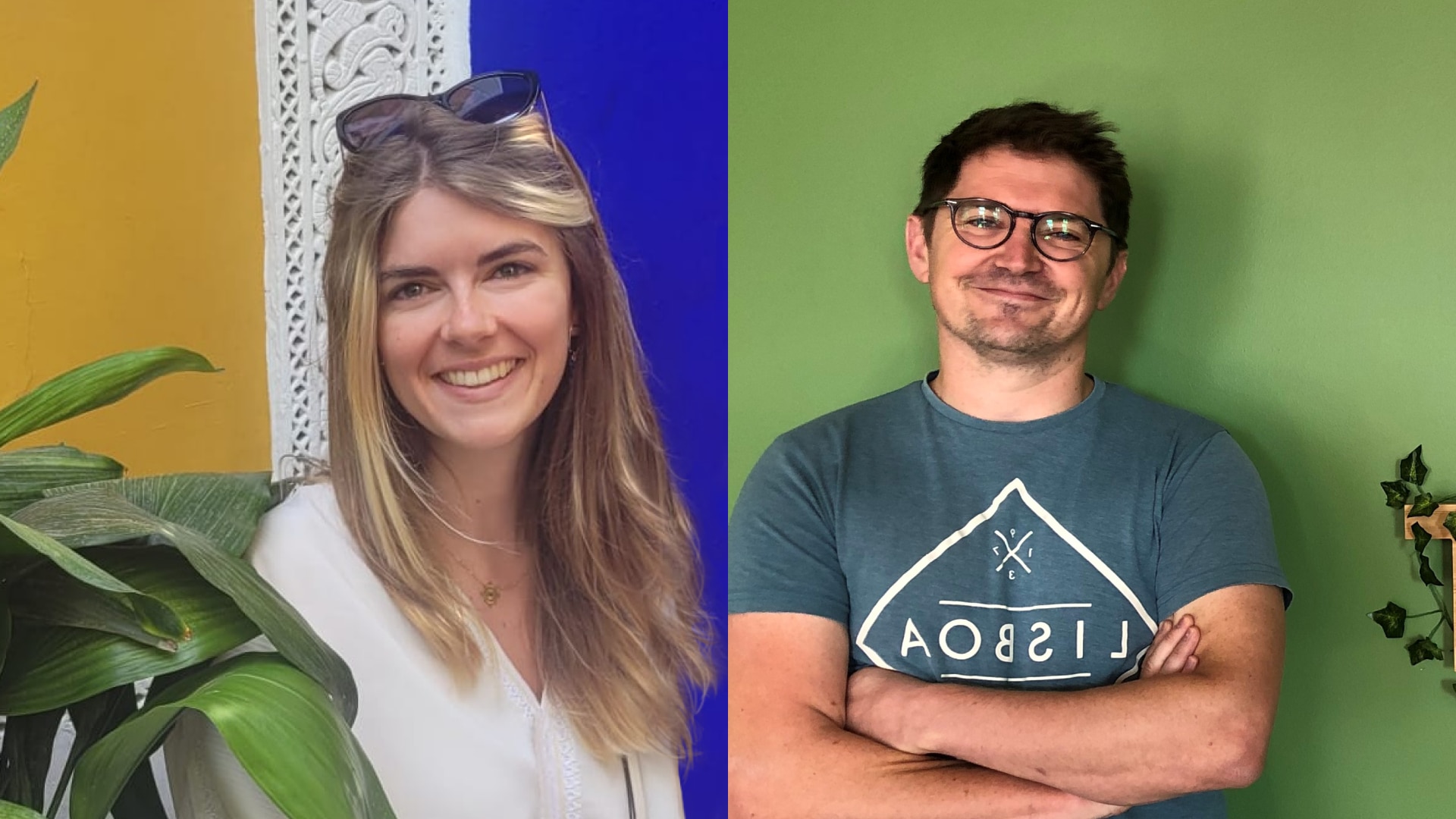 Character Concept Artist Anika Mercier works to create outfits, props, and accessories for 3D projects at the studio. Currently, her team is finalizing realistic costumes for characters in the upcoming Assassin’s Creed Mirage.

What about the Bordeaux studio inspires you creatively? Anika Mercier: Being at the studio helps me feel motivated. It’s a big space, and of course it’s much different than working from home. Being able to collaborate and exchange ideas with my fellow team members when I’m searching for a reference or new idea is really important for the creative process. We often have small meetings to collaborate, and it’s nice to be there in person to discuss your ideas.

Who has the coolest desk at the Bordeaux studio? AM: The best desks are the ones with lots of plants! One of the artists that recently joined our group has so many cool plants, flowers, and bonsai trees on his desk and I love seeing something green among a sea of computers. Of course, we have so many team members with figurines of Ubisoft characters, so it’s easy to be creative in this fun space.

What’s the best internal Bordeaux studio event you participated in? AM: I began working at the studio during Bordeaux’s COVID-19 lockdowns, so we didn’t have many in-person events when I first arrived. However, it was amazing when we began to return to the studio and have parties and team-building activities together. One of the first activities we did was bringing the entire Assassin’s Creed Mirage team together at a chateau near Bordeaux. We played VR games, volleyball, and board games, and we just took time to meet everyone and talk about our lives. For me, as a new team member, it was the perfect opportunity to learn what everyone does at the office and talk about specific ways we could collaborate in the future.

What is your favorite way to foster teamwork among your fellow team members? AM: In the city of Bordeaux, everyone loves to go out on Thursday night for dinner and drinks with colleagues. Our studio is no exception – we love to meet up after work to decompress. Our team also likes to go to the cinema, host barbecues, or complete escape rooms together. We like getting together after work or even on the weekend to talk and do team-building exercises together.

Interested in joining the Ubisoft Bordeaux team? The studio is currently hiring for a variety of positions within the production, design, and programming teams. Apply today at https://www.ubisoft.com/en-us/company/careers/locations/bordeaux.