Season 2 – Keener’s Legacy has finally begun in The Division 2: Warlords of New York! Tuesday saw the unveiling of the first manhunt target, Rogue Agent Termite. In the coming 12 weeks you will be tasked to track down five Rogue Agents, culminating in a fight to take down the prime target, Hornet. Season 2 will just like the previous Season be packed full of Global Events, Leagues and an Apparel Event.

Each time a new Manhunt target is revealed, you can also gain Double XP from all game activities for that week. That means twice the XP gained for Seasonal levels and SHD levels – plus an extra Season Cache if you gain 15 levels by the end of the week.

A new season means a new series of rewards from free Seasonal Progression. Throughout the 100 levels of advancement, you’ll acquire the Mantis Exotic Marksman Rifle, the Vile Exotic Mask, a piece of the new Walker, Harris & Co. gear brand for each slot, and so much more. 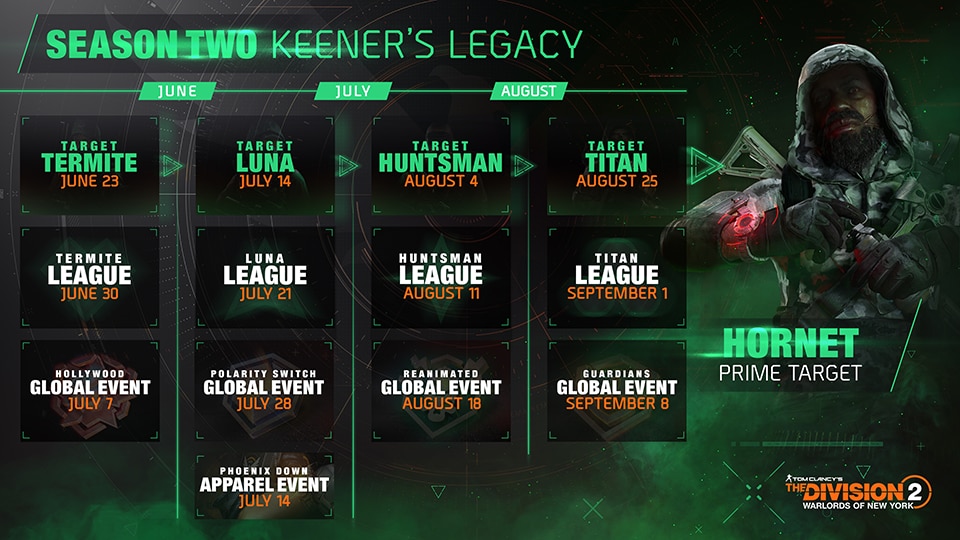 Our second Raid, Operation Iron Horse and commemorative Race to World First are less than a week away. Get ready to gather your squad, take back the Foundry and earn exclusive rewards in the process.

We are excited to see you take on this newest piece of challenging content for The Division 2 and will be eagerly awaiting the results of the Race to World’s First competition.

Twitch Drops will be available starting at 5 PM CEST / 11 AM ET / 8 AM PT, allowing you to earn cosmetic rewards while keeping tabs on the Race to World First. In order to be eligible for the drops, you must link your Ubisoft and Twitch account here.

The level 40 version of the Raid will be available at the start of the competition; at 6 PM CEST / 12 PM ET / 9 AM PT, with the level 30 version opening a week later, on July 7. Discovery Mode will follow sometime after. 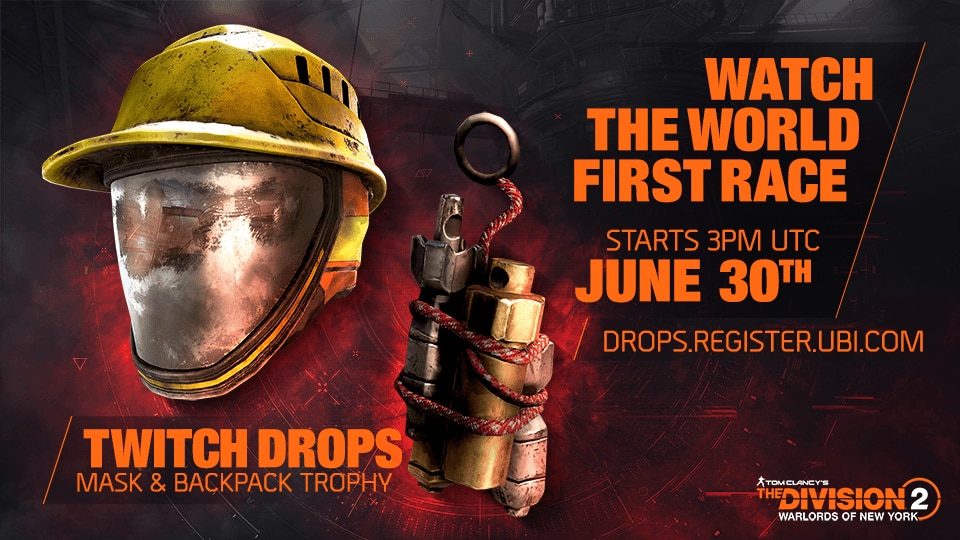 Regarding recent worries of the integrity of the Race to World First being compromised, we want to peel back the curtain a bit. During the maintenance for TU10 there was a brief window of time where players could get into the Operation Iron Horse Raid. Based on the footage that has been shared as well as internal tools which tracks Raid analytics, we can determine that nothing beyond the first room of the Raid has been prematurely seen, no bosses have been encountered, and no mechanics spoiled.

As for the leaderboards, we are experiencing several issues that will take some time to fix. These issues result in there being incorrect entries for the Top Operation Iron Horse Clan leaderboards among other things. Solutions to these issues will require a client-side update and are unlikely to be addressed by the time the Raid goes live.

Finally, regarding the week-long gap between the level 40 and 30 versions of the Raid; we are aware that this decision prevents those without the Warlords of New York expansion from participating in the Race to World First. This was done to help ensure that the winners would be absolute – that there is no doubt if one group won over another because of scaling, challenge, or gear/build quality between the two versions.

Rest assured though that the Race to World First will be held, operated, and winners confirmed with absolute confidence.