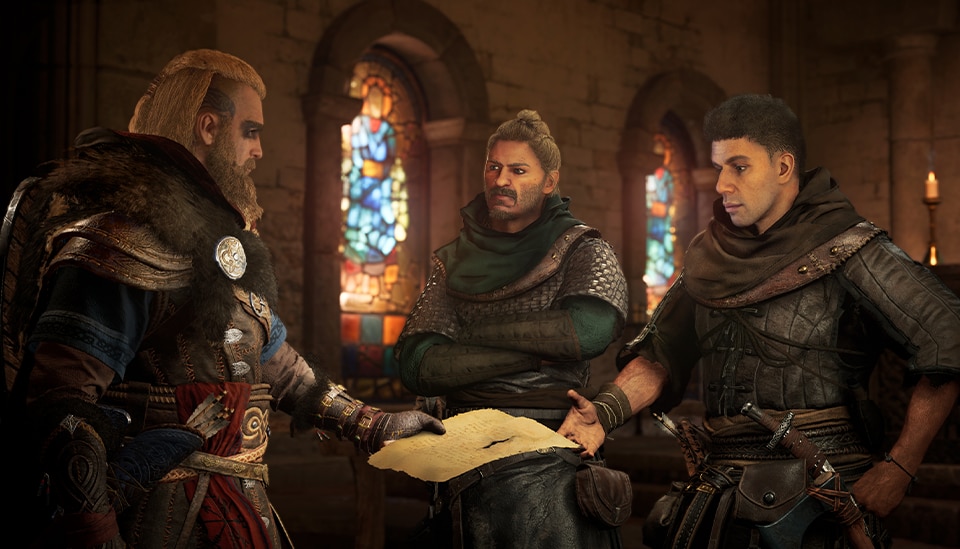 With broad, sweeping landscapes to explore, a community to build, and villages to raid, there’s a lot to do in Assassin’s Creed Valhalla. To help you fully embody the Viking spirit, we’ve gathered five tips to help you start off your conquest on the right foot.

Use Your Navigation Tools

Like Senu and Ikaros before, Eivor’s raven Synin is an important companion who provides a (literal) bird’s eye view of the ground below. However, unlike the winged companions of past games, Synin’s main strength is in finding points of interests for Eivor to investigate while exploring the map. Though she isn’t as adept at highlighting enemies, the raven is only one of many useful navigation tools at Eivor’s disposal. Eagle Vision also makes a return to the series in Assassin’s Creed Valhalla, and it’s a critical skill to use when searching an area for important items and secrets. Finally, the compass will point the player to important upgrades like weapons and special abilities. With an expansive map filled with things to discover, do, and explore, it’s important to use these tools to access important items.

Persistence is key when seeking out new weapons in Assassin’s Creed Valhalla, because you’re going to have to discover them on your own. Weapons won’t be gathered by simply looting enemies; instead, you’ll need to use your navigational tools to track them down at specific locations on the map -- making it even more important to prioritize exploration while on your conquest. There are also legendary items and weapons waiting to be discovered, so don’t feel like you need to stick with the first weapon you get!

The Settlement is essentially the hub for most of Eivor’s adventures. Make building up your Settlement a priority. Raid for supplies to create and upgrade many of the various structures in your Settlement, and spend time interacting with your neighbors and reaping the unique benefits of having a healthy community. There are many narrative arcs, missions, activities, and game mechanics accessible through creating and upgrading your Settlement, so it’s crucial to focus on building it up to get the most out of the game.

Everyone knows a Viking is only as good as their raiding party, and it’s especially true in Assassin’s Creed Valhalla. In order to get the most out of your raids, you’ll need a solid team of raiders to help you open certain doors and chests, fight enemies, and brute force your way through conflict. When building up your Settlement, you can customize your raiders into a lethal force capable of taking down even the most fortified of England’s areas. Pay attention to them in battle, too; if they get downed in a fight, they’ll need Eivor to revive them and get them back on their feet.

While new skills and abilities are unlocked via the progression system in Assassin’s Creed Valhalla, there are also special abilities available to Eivor that allow for unique advantages in and out of combat. Like weapons, these have to be discovered in the open world. You’ll find them in the form of books, and your compass will help guide you to them while you’re exploring.

While these tips will help you on your journey to become the ultimate Viking, they’re by no means the only ones we have available for you on Gameplan. Make sure to also check out Things You Didn’t Know You Could Do and other guides and tips to help you master Assassin’s Creed Valhalla.