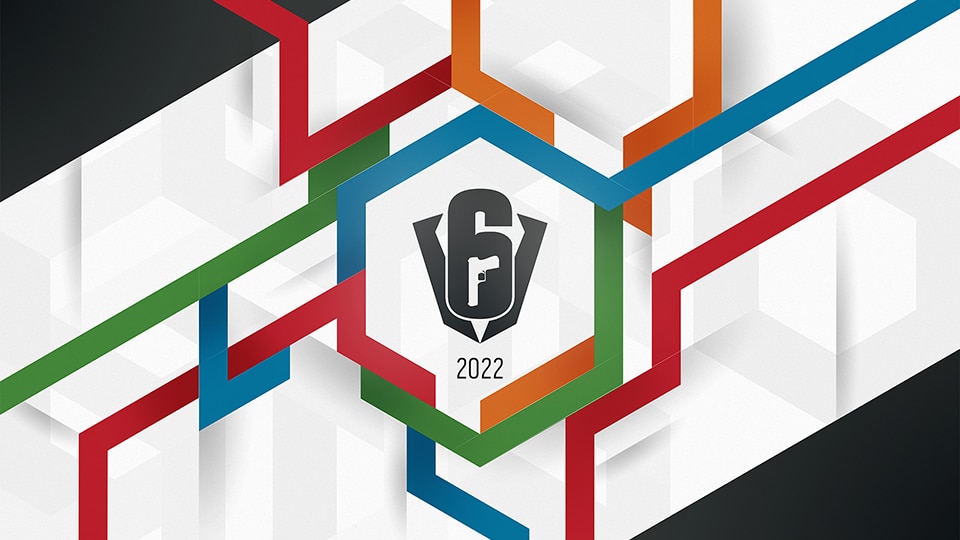 YOUR GUIDE TO THE SIX INVITATIONAL 2022

The Six Invitational 2022 is just around the corner, promising exciting international matchups, as the top 20 teams across the main regions will battle it out for the title of World Champions, with hopes of lifting the coveted hammer. As announced in January, due to recent regulations and event restrictions in Quebec, Canada, the 2022 edition of the Six Invitational has been relocated to Stockholm, Sweden, where teams will compete in a LAN environment following strict sanitary measures. The health and safety of our players, fans, staff and partners being our top priority, the event will not host any live audience on site.

As we enter a new year for Rainbow Six Siege, make sure to tune in as we unveil the Year 7 roadmap for the game and our esports scene live on broadcast.

Read on below to find out all the details on the Six Invitational 2022.

The event will take place at the Stockholmsmässan International Congress & Exhibition Center in Stockholm, Sweden, from February 8 to 20.

Here are the 20 teams qualified for the Six Invitational 2022: 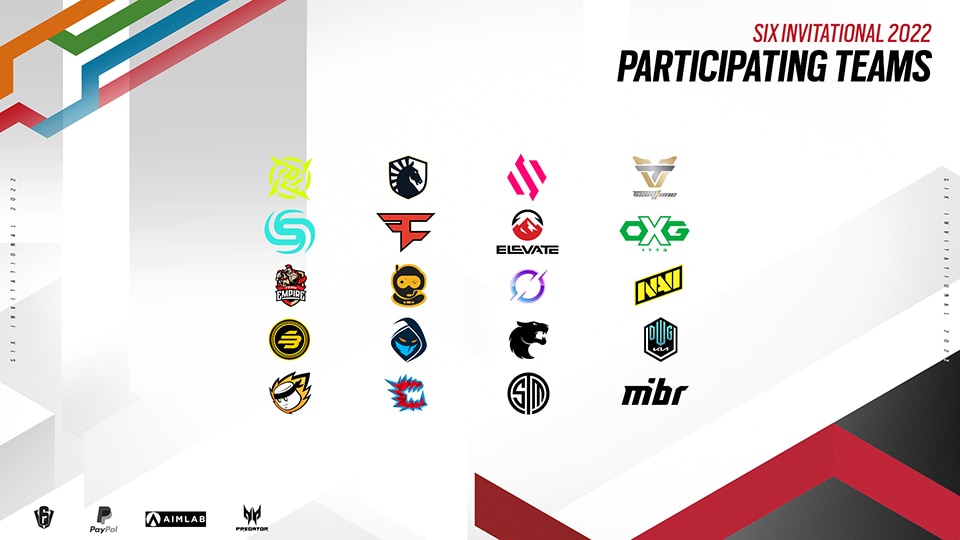 The following 16 teams have secured their spot in the competition by earning points in the Global Standings through the Regional Leagues and Six Majors during the season.

Teams will be split into 4 groups of 5 teams as follows: 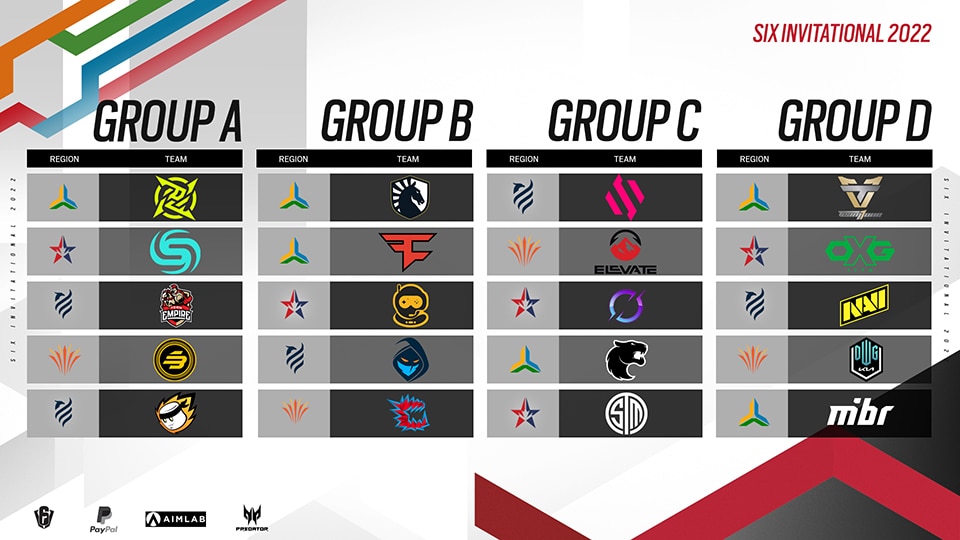 Teams will compete in a Best-of-3 single round robin, where every team plays against every other team in their group once. The point attribution system is as follows:

The top 4 teams in each group at the end of the Group Stage will advance to the Playoffs. 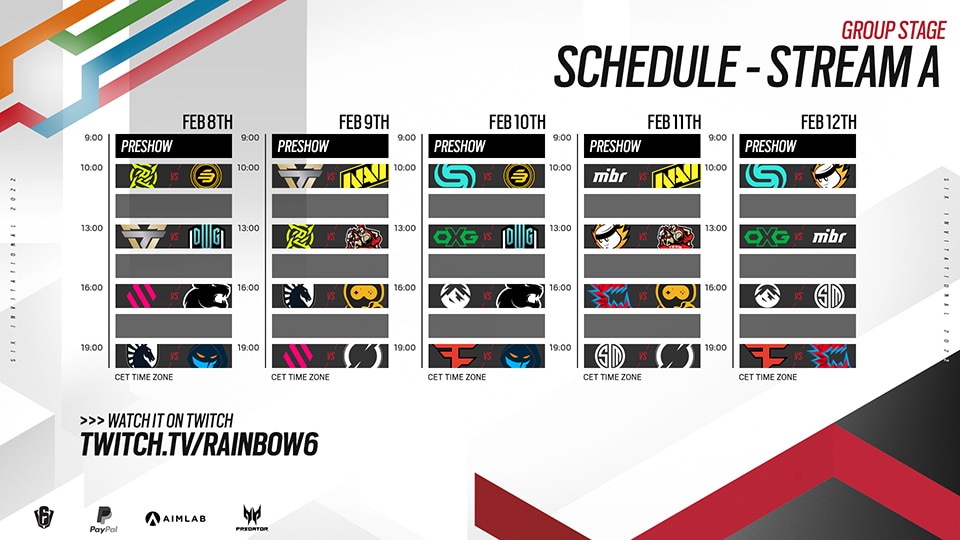 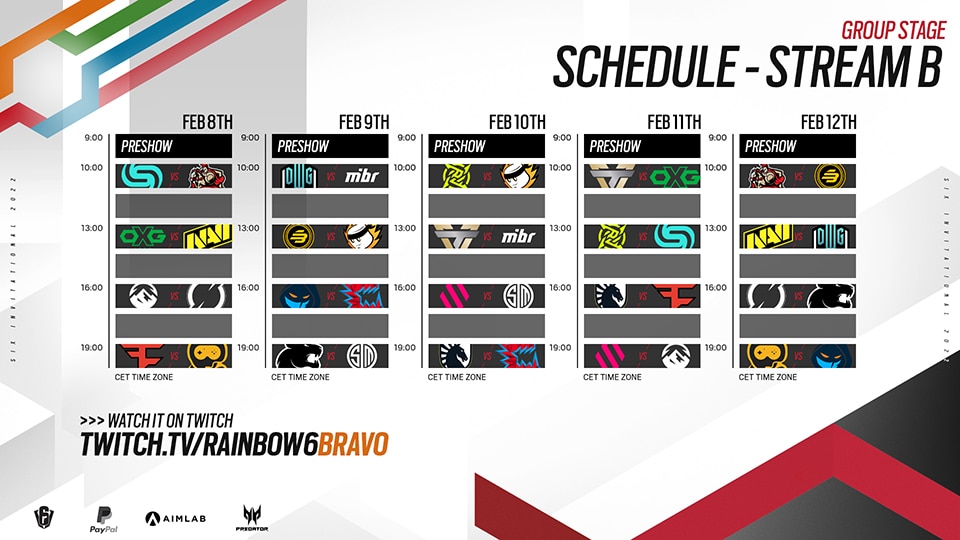 The winners of each match will advance within their bracket, with the loser of a match in the Lower Bracket being eliminated from the competition.

The Grand Final of the Six Invitational 2022 will take place on February 20 in a best-of-5 format with no map advantage, to crown the World Champions! 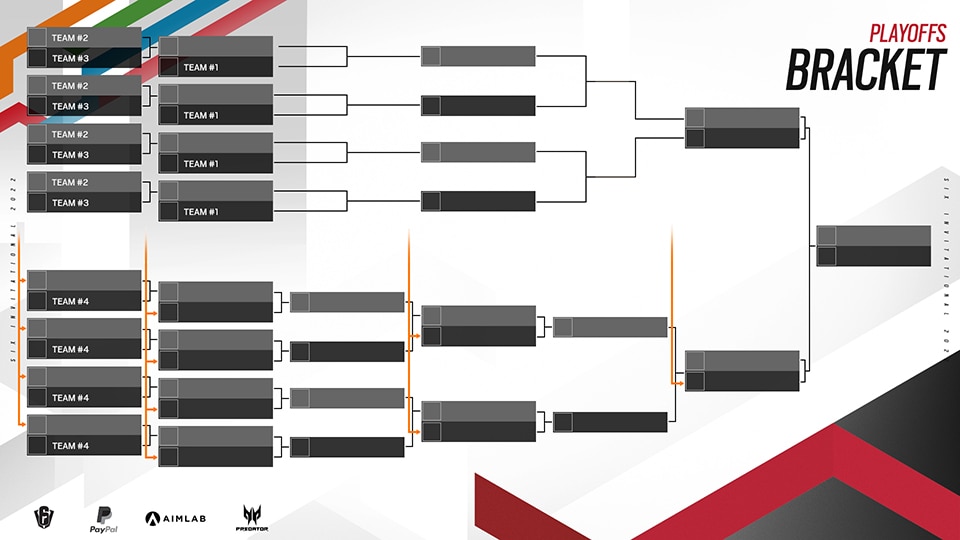 We’re happy to welcome our wonderful talent crew to bring the Six Invitational 2022 action to life throughout the event. 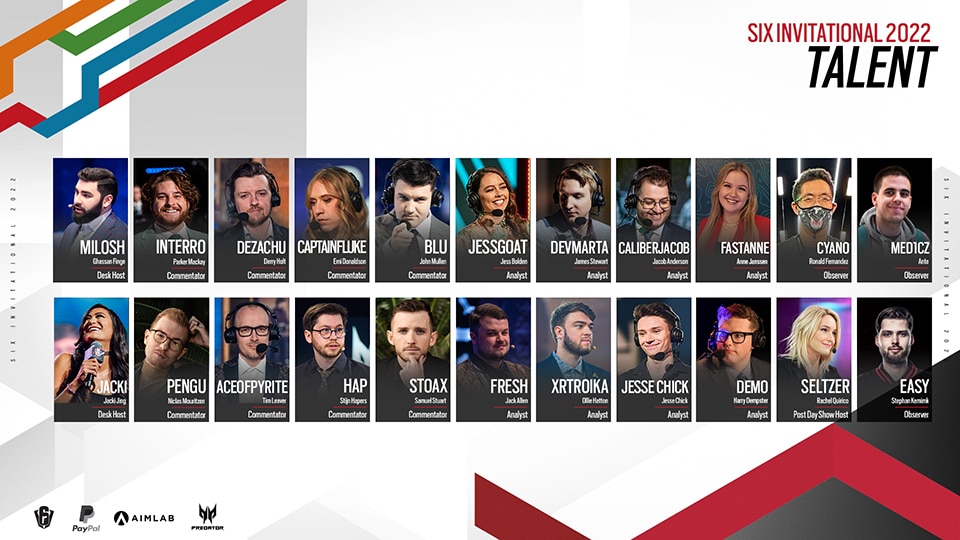 As a true celebration of the year of Rainbow Six Siege, we’re excited to reveal what’s coming next for the game and our esports scene.

Tune in on our channels and online watch parties on:

All Twitch channels below will have Twitch Drops enabled for the Six Invitational 2022.

Please note that English and Portuguese Stream B channels won’t be streaming the final 3 days of the event, which will be streamed on the Stream A channels.

List of channels that will only stream the final 3 days of the Playoffs (from February 18-20):

For the Six Invitational 2022, we are excited to introduce our online Watch Party program to provide an extra viewing experience of the competition. We worked with selected content creators and streamers to stream the matches online on their own channels for you to enjoy.

We will be sharing the list of selected content creators and streamers organizing online watch parties in the coming days on twitter at @R6esports, stay tuned!

For this event, we’re excited to reveal new content to drop on our channels and our content creators’ channels. Furthermore, we are happy to announce that duplicate items are no longer possible, and Battle Pass points will be available in our Esports Packs.

Check out all the details on Twitch Drops here: https://rainbow6.com/SI2022TwitchDrops

As for previous years, the Road to S.I Battle Pass is back for 2022 and available for purchase offering exclusive rewards for the Six Invitational 2022. A portion of all net revenue from the Battle Pass will directly contribute to the prize pool of the competition up to a cap of USD $3,000,000, giving you the chance to support your favorite teams and players. Any amount above the 3-million-dollar cap will be redistributed to support the Rainbow Six Esports circuit for the 2022 season.

To celebrate the Six Invitational 2022, we’re happy to announce a 20% discount on all Pro-Team Bundles and Weapon Skins. The discount will be available from February 8 to 20 in the in-game store, along with a free Esports Pack when you log in.

Looking to gear up for the event? Check out the official flagship item for the Six Invitational 2022 created in partnership with DRKN here: https://bit.ly/si22-eu-ubisoft

Check out the details on the in-game content that comes along with the hoodie in our article here. 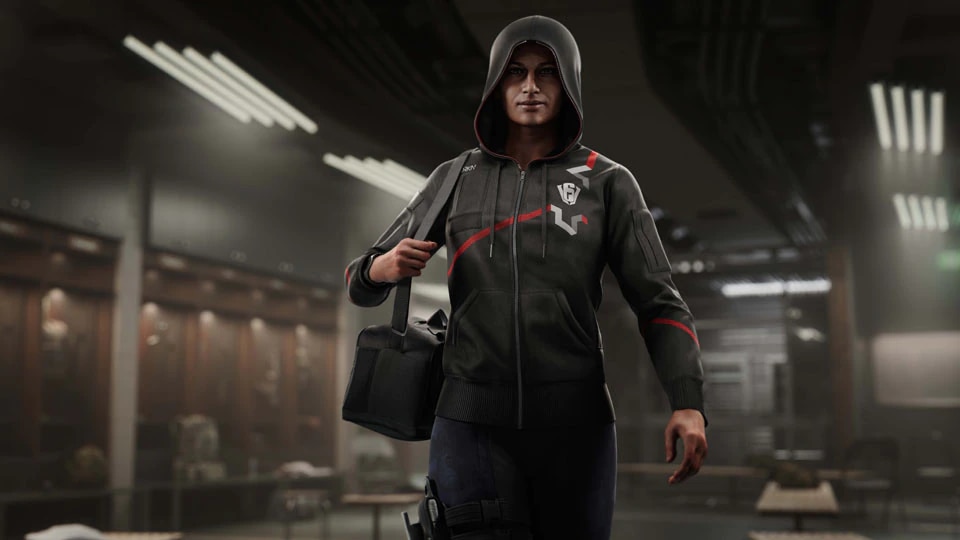 Looking for additional Six Invitational 2022 merchandise? Check out the official collection created for the event in partnership with We Are Nations here: https://wearenations.com 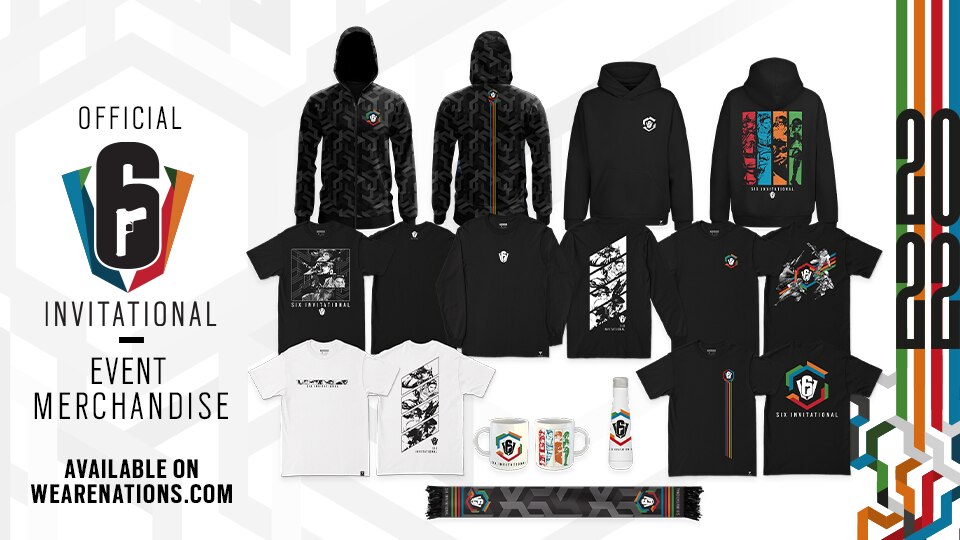 This year again, we are excited to have some of the finest content creators in our Rainbow Six community battle it out during the Showmatch of the Six Invitational 2022, for a charity prize pool of USD $50,000 to be donated to SpecialEffect.

The match will be pre-recorded and broadcast on stream on February 18. The ten content creators will play the new Team Death Mode as a warmup and the two Road to S.I 2022 Battle Pass maps, in an action-packed game!

Which of these two teams, representing North America and Europe, will come out victorious? 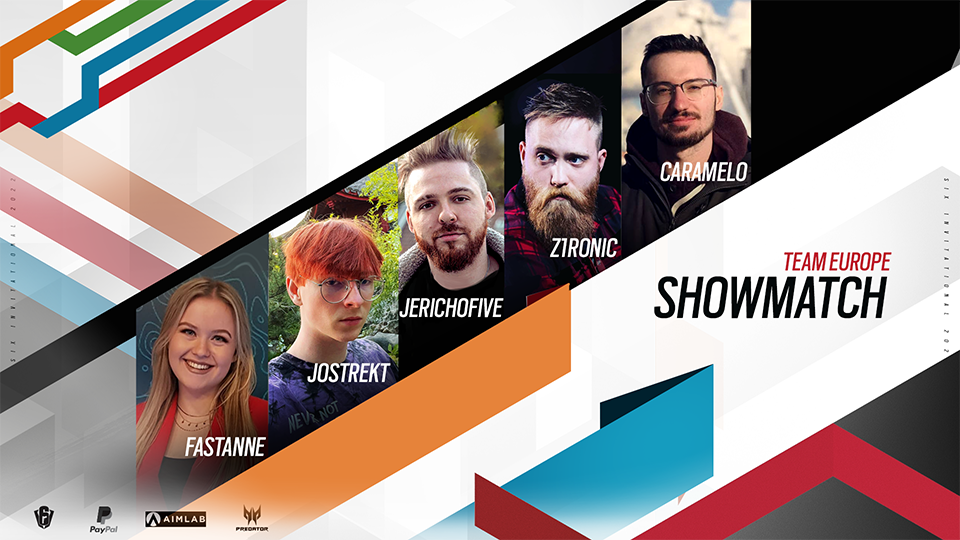 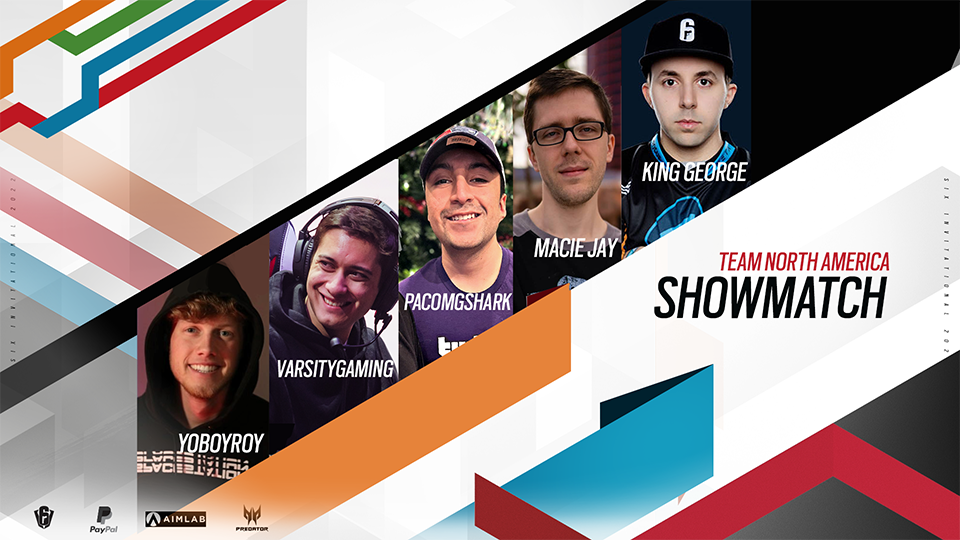 With the health and well-being of our pro players, staff, partners, and fans as our top priority, the event will be held under strict sanitary measures for all participants. Additionally, we have taken the decision to hold the Six Invitational 2022 without any on-site audience. We have been working with our partner ESL to develop a controlled, safe, and competitive offline environment in line with health organizations and local authorities’ guidelines. Below are the different actions that will be taken to ensure everyone’s safety. We remain steadfast in our commitment to deliver gold-standard safety measures.

Please note health and safety measures may be updated up until the event, based on the evolution of the situation and local authorities' guidelines.

For all participants, regardless of vaccination status: a negative PCR test to provide in order to fly to Sweden – maximum 48 hours before departure.

All participants have been asked to remain on the premises of their hotel and the venue for the entire duration of the event, which are in the same location. All necessary amenities will be at the disposal of the participants to ensure a positive experience at the hotel and venue.

While we are taking all necessary steps to keep all attendees safe, we are still preparing for unexpected circumstances.

Participating teams will face competitive sanctions, up to dismissal from the site and disqualification entirely from the competition, should they fail to comply with the safety instructions at any moment during the event.

Once in Sweden, if a player tests positive after any of the required PCR tests:

Don't miss anything about Rainbow Six Esports and the upcoming Six Invitational 2022 by following us on Twitter at @R6esports and @Rainbow6Game, Instagram and on our website.