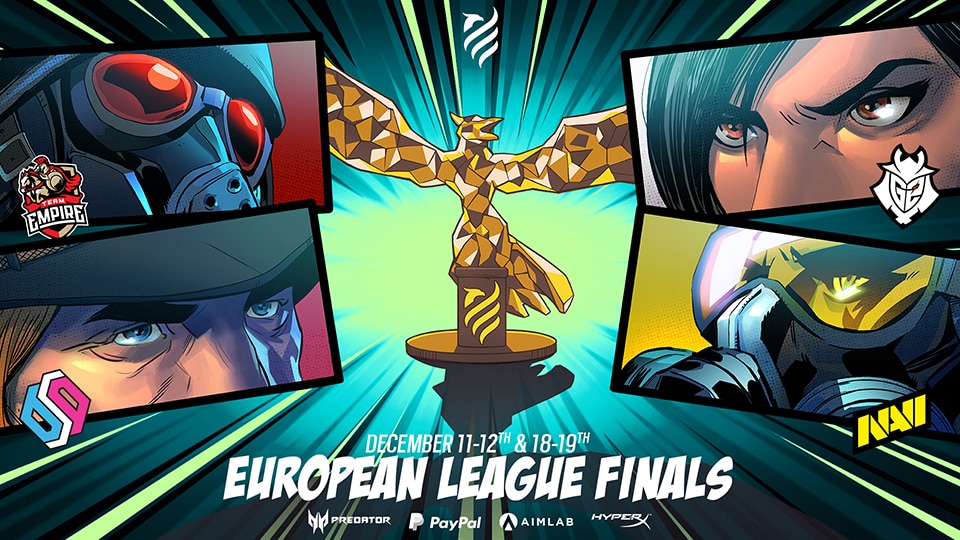 YOUR GUIDE TO THE EUROPEAN FINALS 2021

With Stage 3 of the regional leagues and the Six Sweden Major in the books, European teams in Rainbow Six Esports now turn to the European Finals, which will take place online across two separate weekends, on December 11 to 12 and December 18 to 19.

Check out all the details about the European Finals below.

The European Finals will be held online at the following dates: Here are the 2 teams that will compete in the European Challenger League Final: On December 12, the top 2 teams from this season’s European Challenger League will compete in a Best-of-5 Final, with the winner claiming one of two spots for the next season of the European League. We’re happy to announce that our channels will support Twitch Drops for the European Finals! Please note that duplicate item drops are possible. During the Regional League Finals, across all regions, viewers will earn 1 pack every 4 hours watched, with a maximum cap of 3 packs per week.

All drops will need to be claimed manually. You can track all the Drops progression on the Inventory page https://www.twitch.tv/drops/inventory. When the Drops condition is reached, you will need to click on the “Claim” button in the Inventory page to claim the reward and continue the progression towards the next reward. Please note that the “Claim” button will be available only 24 hours after the end of the campaign (the final playday of the Regional Finals). The delivery of claimed items will usually be done 48 hours after the end of the Regional Finals.

Here’s the list of channels that will stream the European Finals. All Twitch channels below will have Twitch Drops enabled for this event:

We’re happy to welcome our crew of talents to bring the European Finals action to life: