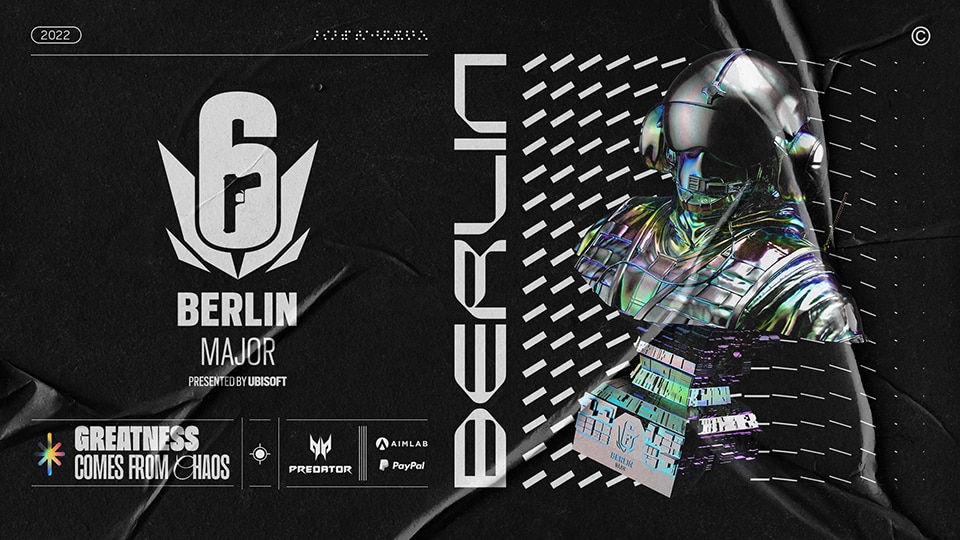 Your Guide to the Six Berlin Major 2022

With Stage 2 done and dusted, players and fans are now getting ready for the Six Berlin Major! The top teams across Asia-Pacific, Europe, Latin America, and North America will face off at the Theater am Potsdamer Platz, in Berlin, Germany, from August 15 to 21.

Making its way back to Europe, the Six Berlin Major marks the grand return of live audiences for an international Rainbow Six Esports event in the region, and we couldn't be more excited to welcome you on-site for the Playoffs and Grand Final from August 19 to 21.

Read on below to check out all you need to know about the event, including competition details, on-site activities, where to watch, and more!

The event will take place from August 15 to 21

The venue will open on:

Attendees that purchased their tickets via PayPal will have access to a priority queue upon entry into the venue at the standard opening hours (indicated above for each day).

Champions Pass ticket holders will be allowed inside the venue to access the on-site activities 1-hour before general entry:

All attendees with a valid ticket will receive 2 printed codes on-site at the event, redeemable at the main desk upon arrival, for an in-game charm and weapon skin on the following days:

Here are the 16 qualified teams that will compete at the Six Berlin Major:

The 16 qualified teams are divided into 4 groups of 4: 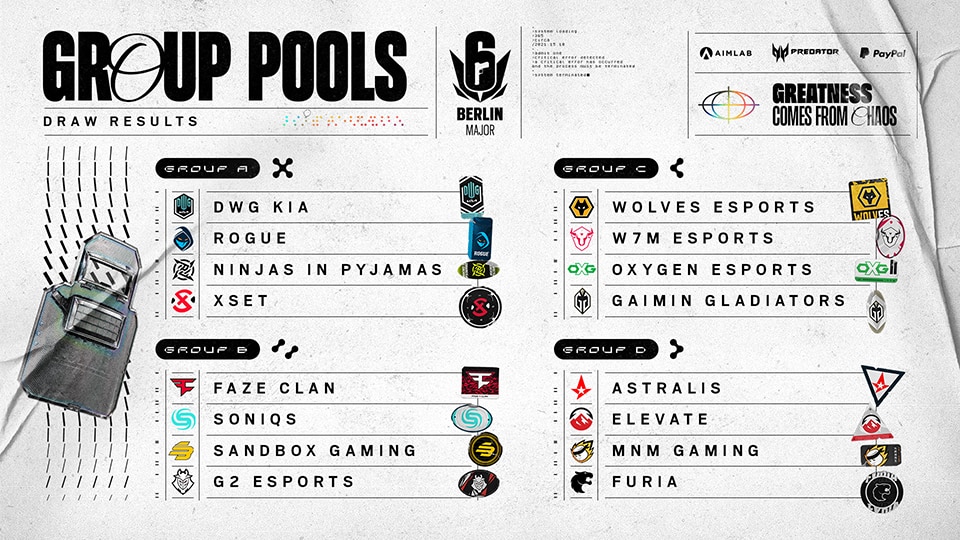 Here is the schedule of the Group Stage: 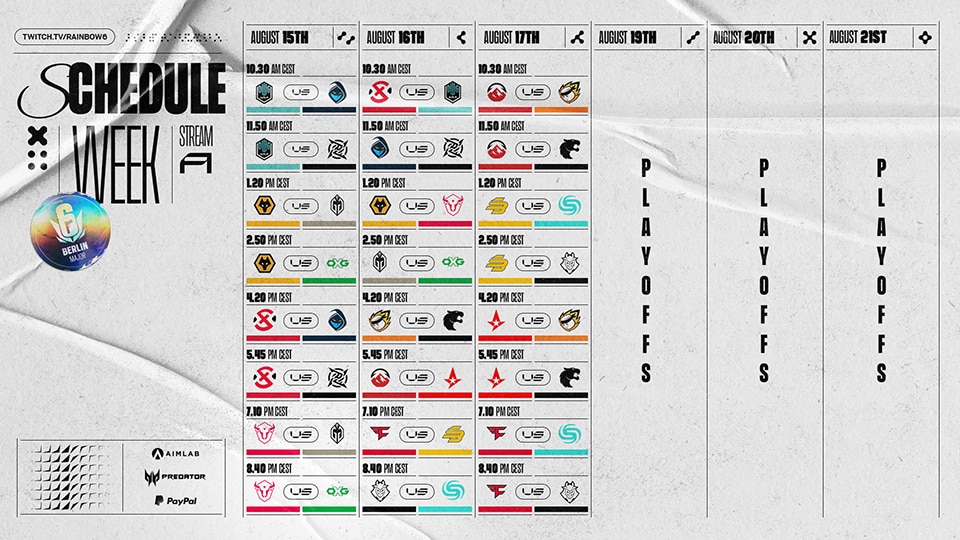 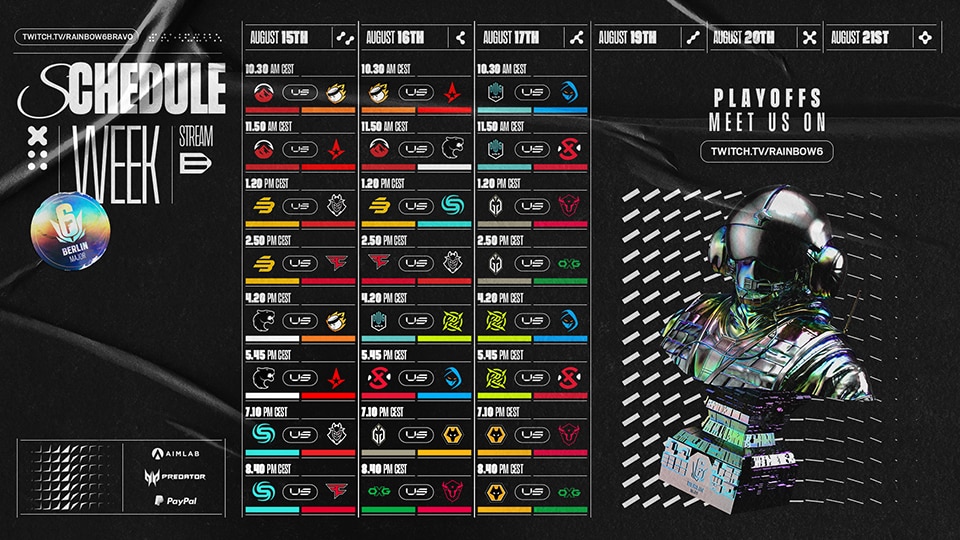 Alongside the competition, we're excited to reveal everything we have coming to Siege in Year 7 Season 3.

Tune in on our channels and online watch parties on August 21 for the full season reveal. For those of you watching the show on our broadcast channels on Twitch, a special charm will be dropped during the panel and redeemable when Year 7 Season 3 launches. 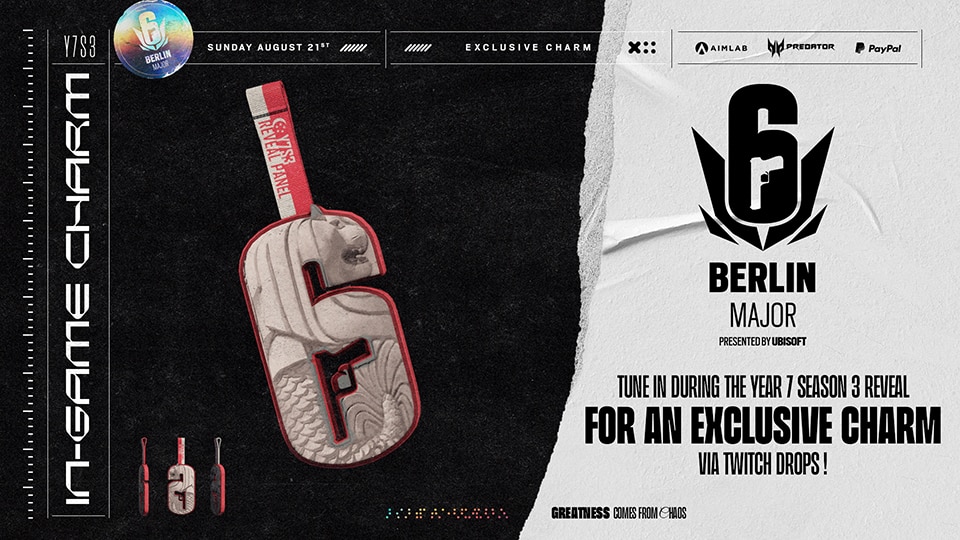 ACTVITIES AT THE EVENT

For those who will be attending the event on-site, check out the activities we have planned for the Six Berlin Major:

The official Six Berlin Major merch will be available on-site! The store will be open on:

The merch will be available online starting from August 19th: 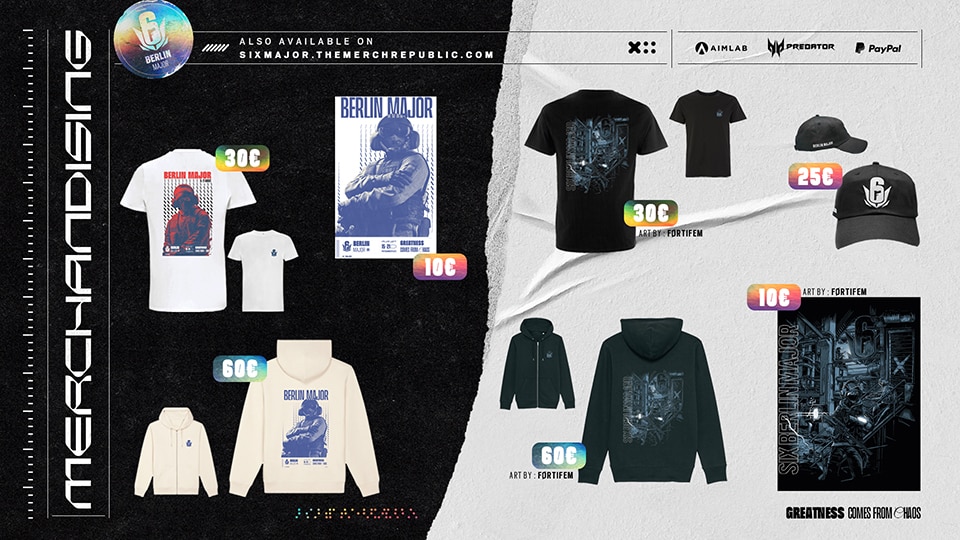 Come and try out Year 7 Season 3 before anyone else in the demo booths at the event, which will be open on:

Please note that the demo booths will be open one hour earlier for Champions Pass ticket holders.

Professional teams will be taking part in meet & greets throughout the event. These will be organized around the teams' schedules on-site. Follow us on Twitter at @R6esports for the meet & greet updates.

We're excited to welcome cosplayers on-site for the Six Berlin Major to share their creations and costumes during the event.

The costumes and props:

Please consider changing into your costume at the venue. Changing rooms will be made available on-site.

Keep in mind that the venue staff won't be allowed to keep / store rejected accessories at the venue. All rejected items must leave the perimeter of the venue at time of decision.

The full rules for cosplay are available here.

A dedicated Meet & Greet area in the venue will be accessible for cosplayers wanting to take pictures with fans.

All Twitch channels below will have Twitch Drops enabled for the Six Berlin Major.

Please note that Stream B channels won't be streaming the final 3 days of the event, which will be streamed on the Stream A channels.

List of channels that will only stream the Playoffs (From August 19 to 21).

Channels in Korean will only stream matches of Korean teams:

Here is the Talent line-up that will be bringing the show to life during the Six Berlin Major! 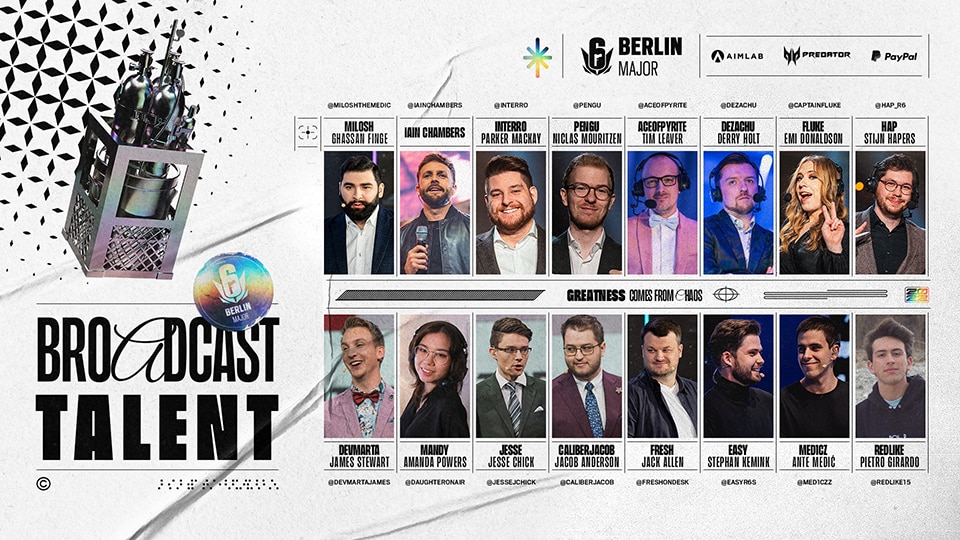 Watch Parties are back for the Six Berlin Major! Stay tuned in the coming days on Twitter at @R6Esports for the list of selected streamers and content creators that will be broadcasting the event on their channels!

During the Group Stage, teams are split in 4 groups of 4 and compete in a Best-of-1 double round robin format, where each team plays all the other teams in their group twice. The point attribution system is as follows:

The 4 teams from each region were seeded based on their final rankings in their respective regional leagues and playoffs. Each group was then created to have one representative from each region with only one seed per group.

The playoffs will feature 8 teams in a single elimination bracket where the quarter finals and semifinals will be played in Best-of-3 matches, with the winner advancing and the loser eliminated from the competition.

The Grand Final will take place on August 21 and will be a Best-of-5 match to decide the winner of the Six Berlin Major! 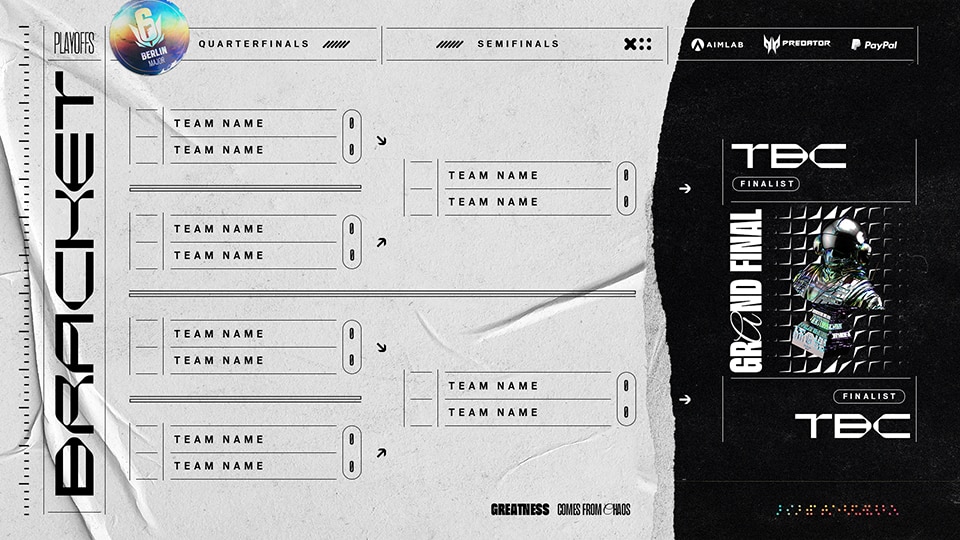 With each regional league and the Six Majors tying into a global race towards the Six Invitational, teams will also compete to earn points to qualify for the Six Invitational 2023. The 16 teams competing at the Six Berlin Major will be awarded the following points in the Global Standings, based on their final placement:

To celebrate the event, the Six Major Jackal bundle is available in the Esports page of the in-game store! 20% of the revenue from this set will directly contribute to the prize pool of the competition, giving you the opportunity to support the teams that will take part in the Six Berlin Major! 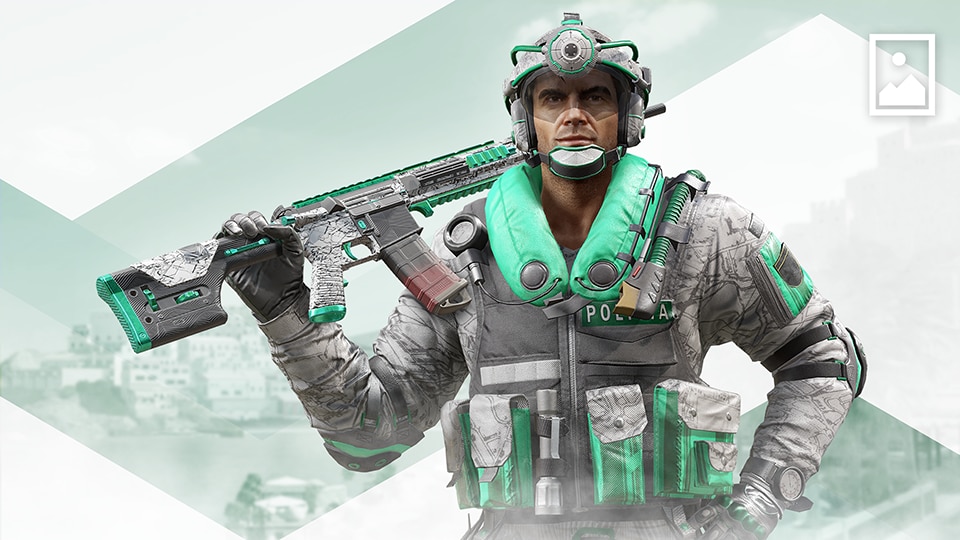 For the duration of Six Berlin Major, from August 15 to 21, we are offering you a 20% discount on Pro Team Bundles and Weapon Skins purchasable directly in the Esports page of the in-game store.

Tune in on our channels and earn Twitch Drops for the Six Berlin Major! There will be no duplicates and viewers will earn Battle Pass points for the Year 7 Season 3 Battle Pass instead. 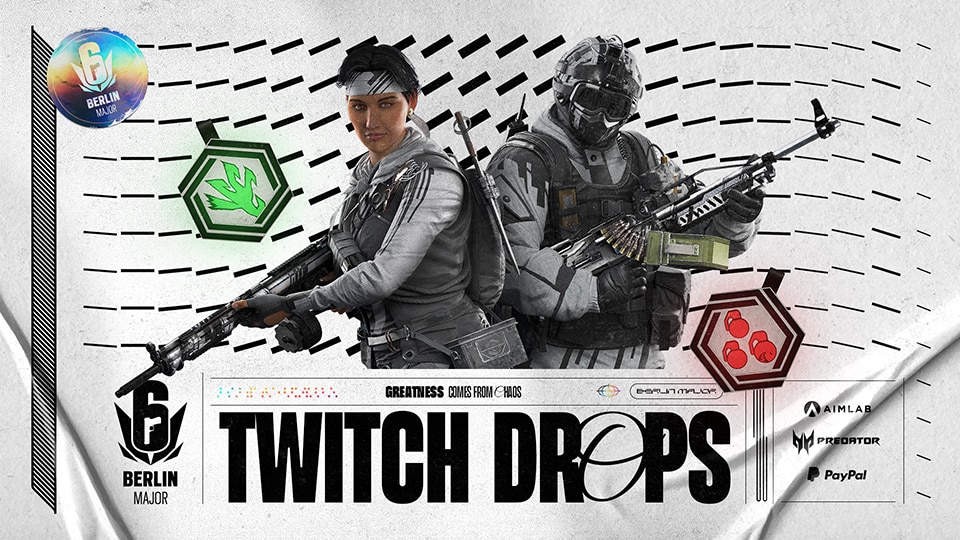 For the Group Stage of the Six Berlin Major, from August 15 to 17, and for the first 2 days of the Playoffs, from August 19 to 20, viewers will earn 1 pack after 3 hours of time watched, with a maximum cap of 1 pack per day.

All drops will need to be claimed manually. You can track all the Drops progression on the Inventory page https://www.twitch.tv/drops/inventory. When the Drops condition is reached, you will need to click on the "Claim" button in the Inventory page to claim the reward and continue the progression towards the next reward. Please note that the "Claim" button will be available only 24 hours after the end of each campaign. There will be 6 distinct campaigns during the Major, corresponding to each Playday of the competition, from August 15 to 17, and August 19 to 21. The delivery of claimed items will usually be done 48 hours after the end of each campaign.

Please note health and safety measures may be updated up until the event, based on the evolution of the situation and local authorities' guidelines. Please find below the health & safety guidelines for the audience.

By entering the Six Berlin Major premise, please acknowledge that you may be filmed by Ubisoft.

Ubisoft may use your image and your voice during the live broadcast of this event, and after the event in order to create videos which may be displayed on internet and social media for commercial and marketing purposes. In consequence, your image and voice may be visible to the public for as long as the videos remain available on Internet and on social media. Entering the Six Berlin Major premise means you consent to being filmed by Ubisoft in the aforementioned conditions. If you do not want to be filmed, please contact our staff members as soon as possible to the following contact address: SixMajor-Security@ubisoft.com

Please note that your image and likeness may be transferred to non-European countries that ensure an adequate level of protection according to the European Commission, or within the framework of the standard data protection clauses adopted by the European Commission (accessible here : https://ec.europa.eu/info/law/law-topic/data-protection/data-transfers-outside-eu/model-contracts-transfer-personal-data-third-countries_fr).

You may exercise your rights regarding your personal data by creating a Data Request here: https://support.ubisoft.com/faqs/35367/