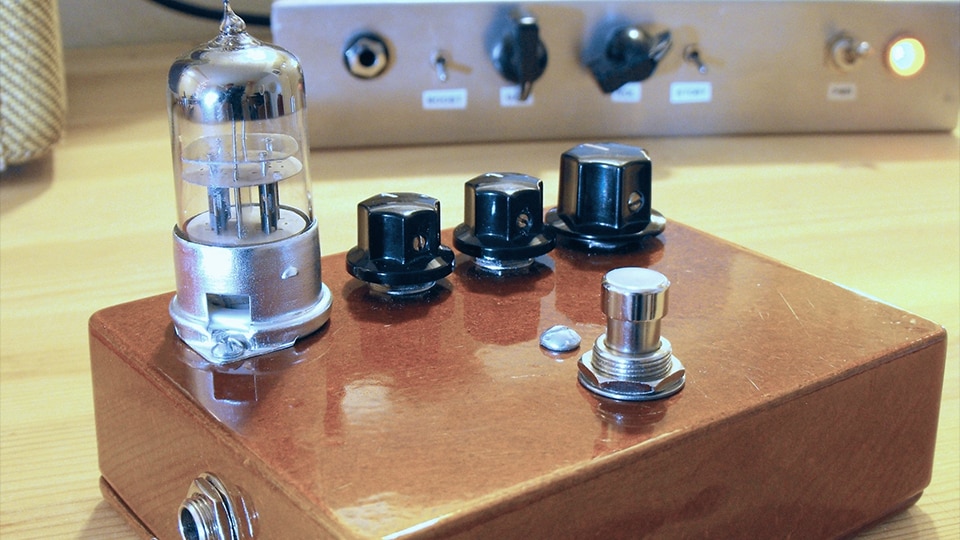 Overdrive is the sound of an amplifier being tortured. The effect began when electric blues guitar players in the 1940s and 1950s simply turned their amplifiers up very loud, forcing the vacuum tubes inside their amps to run hotter than they were designed to run. They found that "overdriving" their amps produced a compressed, distorted, crunchy, fuzzy sound – a sound they liked very much. Those early experiments in "just enough too much" brought the world iconic sounds like the opening lick of Chuck Berry's "Johnny B. Goode," AC/DC's "Back in Black," and pretty much every classic-rock and heavy-rock anthem you can think of. By distorting the signal without destroying it, overdrive is practically the default sound of rock guitar.

You'll hear overdriven guitar on tracks like "How Many Many Years" by Howlin' Wolf – way back in 1951.

But if overdrive takes place within the amplifier, then what's an overdrive pedal? The definition has changed a little over the years. To some, a pedal that will send your amp into overdrive is a booster; Electro-Harmonix's LPB-1 is regarded as the first boost, and it helps pack the amp's input without raising the volume of the amp's output. Brian May of Queen uses a boost pedal (based on the Dallas Rangemaster) to get that signature Queen overdrive sound out of his Vox amplifiers – but the amps are still doing all the work.

Modern overdrive pedals sometimes add their own tonal colorings to the mix too; how much you want to let them is entirely up to you. For example, Stevie Ray Vaughan touched off a craze for the Ibanez Tube Screamer (particularly the TS808 and TS9 models) after players learned that he used one to achieve his warm, saturated lead tone – but he mainly used it as a clean boost to cook the amp a little hotter in the end, similar to what Brian May does. The volume kick from the pedal helps the amp reach that magic overdrive zone of sounding a little out of control, but pleasantly so. 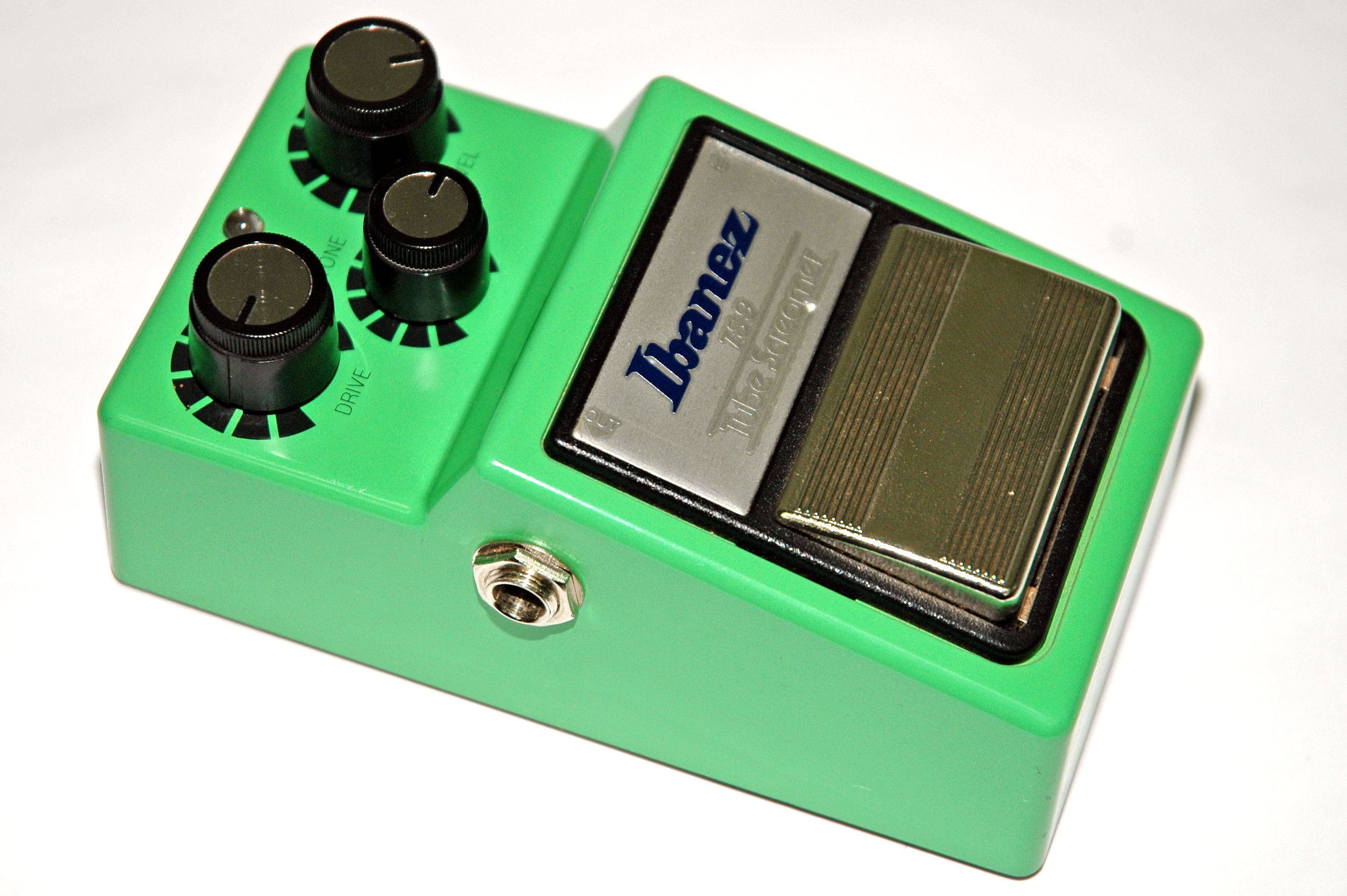 Of course, you can also let the pedal bring the noise. Most overdrive pedals can intentionally add loudness (often labeled as "gain" or "drive" on the pedal), so the amp can make things dirtier from there only if you choose. Tone sometimes changes from the pedals, too: Tube Screamers tend to boost the midrange frequencies, which some people love, while the rare (and now prohibitively expensive) Klon Centaur gained fame in the 90s for offering an overdrive that specifically didn't change the tone. Both pedals, along with the Boss BD-2 Blues Driver, led to copycats and variations on their overdrive themes with great success. 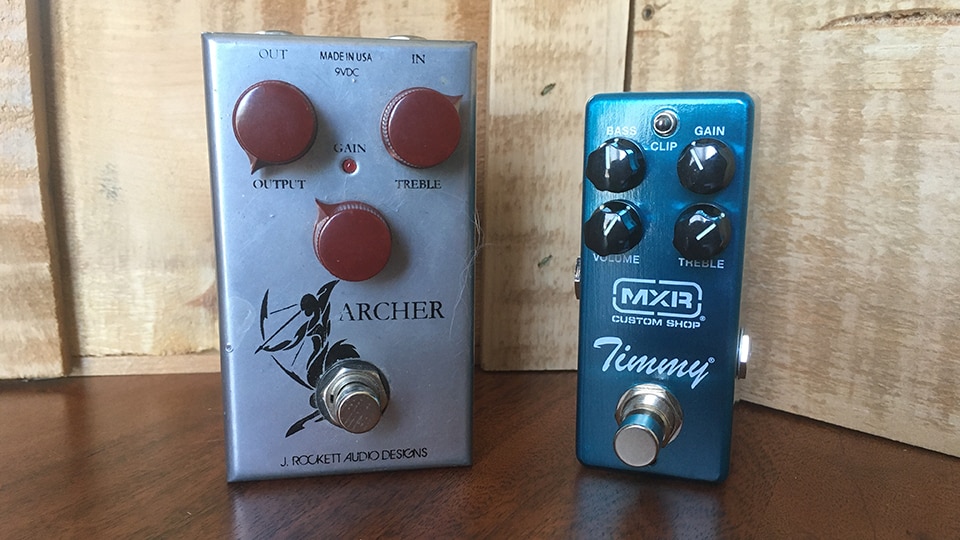 In the world of "transparent" overdrives, both J. Rockett's Archer and Paul Cochrane's Timmy have earned devoted fans.

Sonically, there's a fair amount of overlap between overdrive effects and distortion effects; on a technical level, both signals are distorted, so an overdrive pedal set to a high level might sound close to a distortion pedal set at a lower level. Overdrives don't change the signal nearly as much as distortion pedals do; often there, the goal is to make a new type of sound, just not a slightly grittier one. That slight grit is where overdrive lives, and its sound varies wildly based on the user, their gear, and their musical goals. All options are valid; it's a question of finding the blend of pedal and amp that gives you the satisfying crunch that makes you smile. You'll know it when you hear it.

"Ibanez TS9 Tube Screamer" by Mataresephotos is licensed under CC BY 3.0.

Archer and Timmy photo by Dan Amrich. Used with permission.

__This is just the beginning! Use the powerful practice tools, accurate note detection, and real-time feedback of Rocksmith+ to become the musician you want to be. __