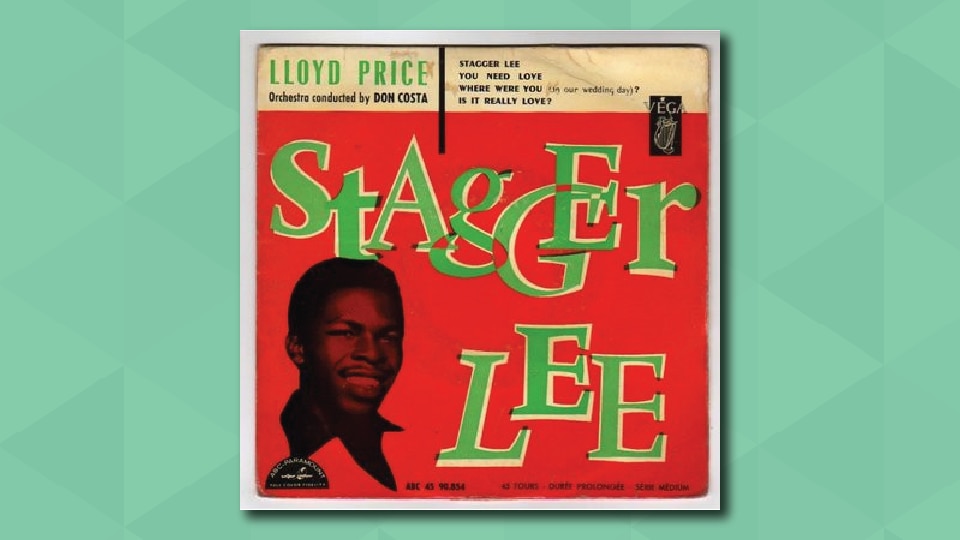 Stagger Lee: The Man, the Myth, and the Music

A murder that occurred around Christmastime in the city of St Louis back in 1895 has become a mainstay in American music. What we know of the crime: Two men enter a barroom, The Bill Curtis Saloon, in St Louis. There is an altercation, perhaps it's political, perhaps it's over a Stetson hat. Things turn from cordial banter to belligerent argument. The first man, known as "Stag" Lee Shelton fatally shoots the other man, Billy Lyons, in the chest. The next day the headline "Shot in Curtis's Place"appears in the St Louis newspaper and details the story of the local murder. A trial follows and the crime is laid to rest from a judicial point of view when he was eventually convicted, but the characters would live on. The storytelling tradition of Stagger Lee begins as a staple in African American folk music and eventually reaches the global stage and weaves its way across multiple genres. What began as a real crime evolves as it is molded and retold so many times that it has become a mythic storytelling tradition.

Many musicians over the last century have taken the historic character of "Stag" Lee Shelton and created their own song based on the villain and his victim. Songwriters often refer to the villain by the shortened nickname "Stagolee," although spelling varies depending on the version. Sometimes it's Stagolee, Stack-O-Lee, Stackerlee, Stagger Lee, Stag O'Lee or even just Stack, drawing on the many different iterations of the song as part of an oral tradition. The song has been written in different styles and genres, but it always draws its storyline from the crime itself. In most cases, the narrator of the song witnesses the crime directly and retells the story from their point of view.

The first song mentioning Stagger Lee can be traced back to 1897, around the time Lee Shelton's trail for the murder was wrapping up. It emerged in African American communities as a traditional folk song that travelled orally across the South. Musicologist John Lomax received a partial transcription of the song in 1910, and the band Warrings Pennsylvanians made the first known recording of the song, titled "Stack O' Lee Blues"in 1923.

The tradition of Stagger Lee storytelling is complex; each version is not necessarily a direct "cover" of an original song and many shift the details of the crime or the manner in which they're told. A playlist on Spotify includes 74 songs that feature this character, and there are likely hundreds more versions including many that were never recorded. Most versions vary lyrically, and the details shift and change depending on the storyteller. Sometimes Stagger Lee is convicted, sometimes not. In many versions Billy Lyons begs for his life or mentions he has three children and a sickly wife. Some versions introduce Billy's widow and have her avenge the murder by killing Stagger Lee. The songs vary stylistically, too: sometimes the song is upbeat song with joyful horns and backup vocals; sometimes the singer croons over an acoustic guitar as a sorrowful blues ballad.

Lloyd Price's 1957 song Stagger Lee was the first to gain national attention, hitting #1 on the Pop and R&B charts. Price's version is one of the more popular accounts and has been lyrically reprised and performed by James Brown, Tina Turner, Shirley Ellis, and Charley Pride, among others. In these versions, the narrator witnesses the murder and attributes the motive to a gambling disagreement in which "Stagger Lee threw seven" and "Billy swore that he threw eight." In this version, Stagger Lee's Stetson hat is mentioned as being won by Billy in the gamble, further fueling Stagger Lee's motive for the murder.

Mississippi John Hurt's 1928 version attributes the motive to Billy outright stealing Stagger Lee's "five dollar" Stetson hat and laments throughout the song why the police can't seem to arrest "cruel Stagolee." Taj Mahal would cover this same version, its narration focused on wondering why justice can't be served. In Ma Rainey's 1926 Stack O'Lee Blues she sings that "he was my man, but he's done me wrong" creating an intimate relationship between the narrator and the antagonist. In Justin Townes Earle's 2017 song Same Old Stagolee he imagines that Stagolee has committed a new crime, his victim being named Jimmy Brown. Keeping with tradition, Earle retells the crime from a witness perspective and acknowledges the long tradition of the song itself in his closing lyrics: "So this story done been told / Time and time again / Same old means, same old end / Same old Stagolee." Some versions change the timing or location of the event: The Grateful Dead's version sets the event in 1948, Nick Cave places it in 1932, and The Journeymen change the location of the crime to New Orleans. Like all folklore, every time the story is told it is told differently, fact blurs into fiction.

Throughout these many retellings of the murder ballad, the characters evolve, no longer based on the facts of the crime itself, but instead becoming mythological characters, similar to Jack the Ripper. This evolution allows songwriters the freedom to tell wild stories, exaggerate details, change locations and circumstances, and invent motives for their characters. It becomes more about the storytelling itself and less about what we know to be historical fact. If we were trying to gain evidence for a court case from all these different songs about the original crime, the clues wouldn't add up.

While this kind of evolution within musical storytelling is a not a unique phenomenon - other songs from folk traditions also proliferate in many different versions - it is difficult to find another story or character in folk music that has been retold in so many ways and so prolifically. The story inspired not only countless songs but also moved outside music-making, including a poem by James Baldwin and a graphic novel. What is it about the story of Stagger Lee that resonated so much at the time and continues to inspire new versions? Perhaps a character like Stagger Lee, who could break the rules and be untouched by authority, makes him a popular anti-hero. A 2003 book by Cecil Brown titled Stagolee Shot Billyattempts to answer these questions and decipher why this character is "a legend bigger than literature" and why this story is such a staple in African American folk music and culture.

The song has transcended its original inspiration and become less about the crime itself, and more about its staple as storytelling in American music. This isn't really a story about a specific crime that happened in St Louis anymore, it's about much more than that. Above all it's a story about storytelling through music, and the freedom that this medium provides.