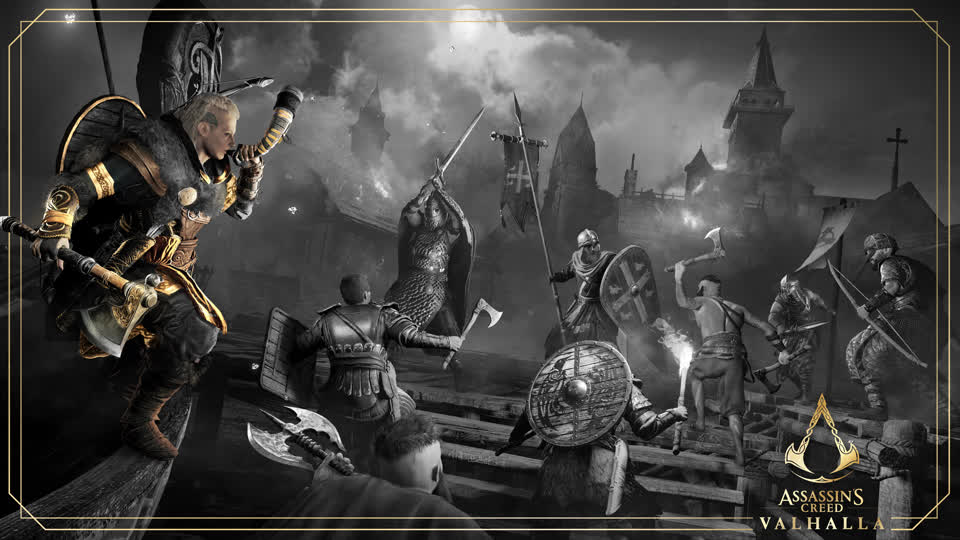 The year 2020 introduced Eivor, a Norse Viking warrior carving out a place for their people on the shores of ninth-century England. Eivor’s saga would quickly shatter records like never before in the franchise, selling more units in its first week than any other Assassin’s Creed game and would do so after the unique challenge of finishing its development at the height of the COVID-19 pandemic.
Almost overnight, multicultural teams of developers at 17 studios around the world had to rapidly shift to working from home. The team had to find super-fast streaming solutions that could enable animators and combat-system developers – for whom milliseconds can make a huge difference – to access their powerful PCs remotely, without lag.

Assassin’s Creed Valhalla crossed its finish line that November, having spent the bulk of its final year in development as a 100% remote project.

Years earlier, it had been decided that everything about Assassin’s Creed Valhalla should make it the benchmark Viking experience, which became its developers’ guiding principle. Vikings were raiders and settlers, warriors and explorers, and these ideas became central gameplay pillars. From those pillars grew the settlement of Ravensthorpe, a headquarters and haven for Eivor in between trips across England. The dual-wielding fighting system grew out of those pillars as well, as did the deep RPG progression, all of which built on what Assassin’s Creed had previously achieved while giving players more freedom to define their own saga.

Typically depicted as bloodthirsty invaders, Vikings fit in well with Assassin’s Creed’s tendency to explore traditionally vilified perspectives: Assassins, pirates, and so on. In fact, the team was able to dispel some of their own illusions as they researched the history behind Viking legends. Far from the mindless barbarians they initially pictured, Vikings were a relatively refined people, and took great pride in their appearance and cleanliness. They were master craftsmen and sailors, and their longships were technological marvels that made it possible for them to travel the globe as well as to fight like marines, beaching their ships and charging ashore – something reflected in the game’s raids and battles.

Much of what is known about Vikings today actually comes from either their enemies or their oral traditions, both of which leave a lot of gaps and distortions in the historical record. While the team hewed close to history, that also gave them room to interpret and define what Vikings could be – including their myths and superstition, which come through in visions of Odin, hallucinatory battles with the witchlike Daughters of Lerion, and the cursed symbols that dot the English landscape.

Assassin’s Creed Valhalla is a vast world of secrets and discoveries, and like the Viking longships it depicts, it emerged from a dark age as a staggering technological achievement.