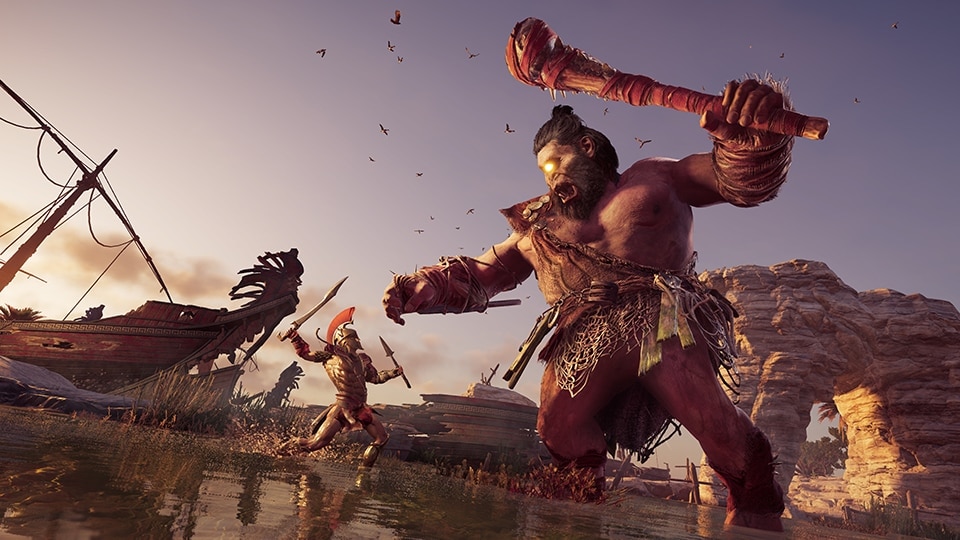 Your journey as a legendary misthios took you all over Greece to face countless dangers. You defeated some of the most fascinating creatures from Greek mythology: Medusa, the Sphinx, the Minotaur, and the Cyclops.

But we're not done yet!

In January 2019, we will be adding the last of the three Cyclops brothers, Arges.

To mark this occasion, we sat down with some members of the development team to talk about what it was like to bring these mythical beasts to life.

- Hello guys, and thank you for joining us today. To kick things off, could you please tell us a bit more about yourself? What do you do at Ubisoft, and how were you involved in the development of Assassin's Creed Odyssey?

Gareth Glover – I'm Gareth Glover, game director on Assassin's Creed Odyssey at Ubisoft Bucharest. My role as game director is to ensure that of all the content created here in Bucharest is to the highest possible standard and blends seamlessly with that of the lead studio in order to create a coherent and memorable player experience.

Tiberiu Burnea – I'm Tiberiu Burnea, lead game designer on Assassin's Creed Odyssey at Ubisoft Bucharest. My role is to lead the Design team here in Bucharest and help them create the most challenging and engaging creature fights as possible.

- What was the first point of inspiration for having those creatures?

Thierry – Having our game set in the golden age of ancient Greece gave us an incredible opportunity to tap into fabulous Greek mythology. Many of these myths and legends are still very well known today. There are a lot of English words that have Greek roots, and a lot of them come straight from the names of gods and mythological figures. So we really wanted to add some of these creatures in the game, and we thought that not having them would have been a huge missed opportunity.

- Why did you choose those four creatures specifically?

Thierry – We ended up choosing the Sphinx, the Cyclops, the Minotaur, and the deadly Gorgon Medusa because they are some of the most famous and well-known creatures from Greek mythology. They were also all defeated by Greek heroes such as Oedipus, Odysseus, Theseus, and Perseus. So we really wanted to give our player the incredible opportunity to face those creatures and to become a legendary Greek hero.

- For our fans who are deeply invested in the lore of the series, could you give us a little bit of backstory for each creature? Where they come from and what their role is in the world?

Gareth – Our recreation of Ancient Greece is full of mysteries, myths, and legends, true to how people of the time envisioned them. For them, the gods and the supernatural were everyday explanations for things that couldn't be otherwise explained, and so we created a lot of quests and content based around this understanding. Each of the Mythical Creatures, for example, has a quest and backstory to really pull the player into the myth, but also to explain how these creatures – and the myth – exist within the Assassin' Creed universe. It's hard to go into the specifics of each creature's backstory without major spoilers, but what I can say is that Assassin's Creed Odyssey focuses on the First Civilization lineage and how the discovery of First Civilization artifacts sparked the longstanding conflict between Order and Freewill – and it's these artifacts that are somehow responsible for the presence of the creatures in Greece.

For fans who are deeply invested in the lore of the series, The Fate of the Atlantis – one of our post-launch story arcs – will dig even deeper into Greek mythology, its connection to the First Civilization, and the mysteries of these powerful artifacts.

- Moving on to a more technical aspect of your job, could you explain to our players the different steps of building a boss fight?

Tibi – The first step in the design is to identify how we want the player to feel during the fight, whether they should feel threatened, empowered, in control, etc. Once this is decided we work on the structure and pacing of the fight, which is linked to the size of the enemy – one would expect bigger enemies to move slower but hit harder and vice versa, but this rule does not always apply.

After this, we break down the attack animations and their parameters, such as areas covered, speed, and distances, as well as other functionalities we might need for specific mechanics. This is also the moment where a level designer jumps in to define the area where the fight takes place.

Afterwards, all the needs are sent to various teams for implementation; each team has their own processes – the animations first have to be motion captured, cleaned and implemented. The programmers work their magic on functionalities and systems, the level design team starts iterating until the size and shape of the area are defined, and the art team jumps in to make everything look pretty. We also have other supporting job families that make sure everything works well and within the tech restrictions.

- How was the process of animating the creatures? Was it any different than animating human NPCs?

Tibi – For Medusa there wasn't a huge difference from standard human NPCs, but for the other creatures – Minotaur and Cyclops – we really had to take into account the size. We had to make them feel powerful, big and imposing, but also ponderous and deadly – therefore they were very different from those found on standard NPCs.

We had to take into account the different timing and reaches for the attacks when compared to regular humans, but without the creatures feeling unbalanced by allowing large windows of opportunity between attacks.

The animation team also had more to do than on human characters, as the mocap needed a lot more work than the animations for humans to make them believable. Small animation errors that might exist on regular characters are almost invisible during gameplay because of the speed and dimension, but for huge models with slow, wide animations, any irregularity is really noticeable. So the animations have to be top notch, no shortcuts taken.

- Where did the inspiration for the design of each creature come from?

Thierry – For their visual representation and treatment, we worked closely with our in-house historian to have a good understanding of how the ancient Greeks imagined them.

For example, the Medusa is often shown with a snake body but based on our research we decided to give her a human form and boar fangs to stay true to the descriptions of ancient Greek authors.

As another example, our Minotaur is white because we decided to link him visually to the majestic white bull given by Poseidon to King Minos. Instead of fulfilling his vow to Poseidon, King Minos kept the bull for himself and sacrificed a different one to the god. Poseidon plotted to punish him for his arrogance by having King Minos' wife Queen Pasiphae fall deeply in love with the majestic bull. From this courtship, the Minotaur was born.

For the creation of every creature we tried, as much as possible, to stay true to their descriptions given by the authors from our time period. Also, it was really important for us to link them to the lore of Assassin's Creed so these creatures were presented as the creation of the Isu civilization to protect their temples and sites. That's why they all have an Isu artifact attached to them.

- What were some of the most significant challenges you've faced in bringing those creatures to life?

Gareth – One of the biggest challenges we faced when creating the Mythical Creatures was balancing the fights so that they're fun for everyone – whilst still providing enough challenge to make them feel rewarding. With the game going full RPG, this meant taking into account a lot more variables than just player skill level. We had no idea what weapon – or weapon type – the player would be fighting with, what gear they'd be using, what engravings they'd apply, what abilities would be assigned, or what level those assigned abilities are – so we needed a really robust design that allows players to tackle the creatures however they see fit. The player should always feel that the creature is beatable, regardless of their chosen load out or playstyle. I'm really proud of the work the team did here, as it was no easy task and not something that will be immediately obvious to players.

- Do you plan to add new content related to Greek Mythology?

Gareth – There's a lot of new content coming to Odyssey, and with the Fate of Atlantis being part of that – I'd say stay tuned! :)

- Thank you for this enlightening look behind the scenes.

We hope you enjoyed this interview with the team.

To receive news and updates on all things Assassin's Creed, check out the Social Pulse, follow @assassinscreed on Twitter, or join the game discussions on our official forums.