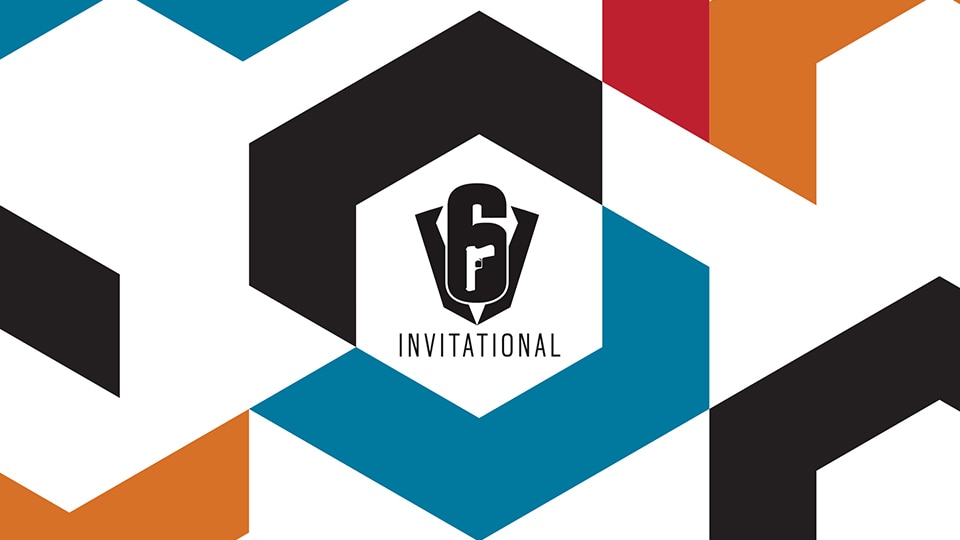 YOUR EVENT GUIDE TO THE SIX INVITATIONAL 2021 – MAY EDITION

Find out more about the Six Invitational 2021 below.

AN UPDATE ON THE PARTICIPATING TEAMS

We are happy to confirm that we have received the authorization from the French government for all 6 Brazilian teams qualified to the Six Invitational to enter France to join the event, following strict safety regulations, which include providing a negative PCR test dating from less than 36 hours before the flight, an antigenic test upon arrival in France, and a strict 10-day quarantine period.

The crown jewel of the Rainbow Six Siege competitive year is right around the corner and we’re happy to confirm that with the Brazilian teams able to join us, we will enjoy a long-awaited clash of the regions that will determine Season 2020’s World Champions.

Since the delay of the competition, we have worked towards gathering all 20 qualified teams to compete and we also had strong hopes that the delay of the event to May would allow Wildcard Gaming to participate.

Unfortunately, despite our joint efforts with the organization and due to a conjunction of factors impacting their Six Invitational roster’s ability to participate, Wildcard Gaming will not compete at the event. We are deeply saddened once more by the fact that Wildcard Gaming will not be joining us. We hope to see them soon in one of our cross-regional competitions. The team will receive 1% of the total prize pool, corresponding to a 19th to 20th ranking in the competition. 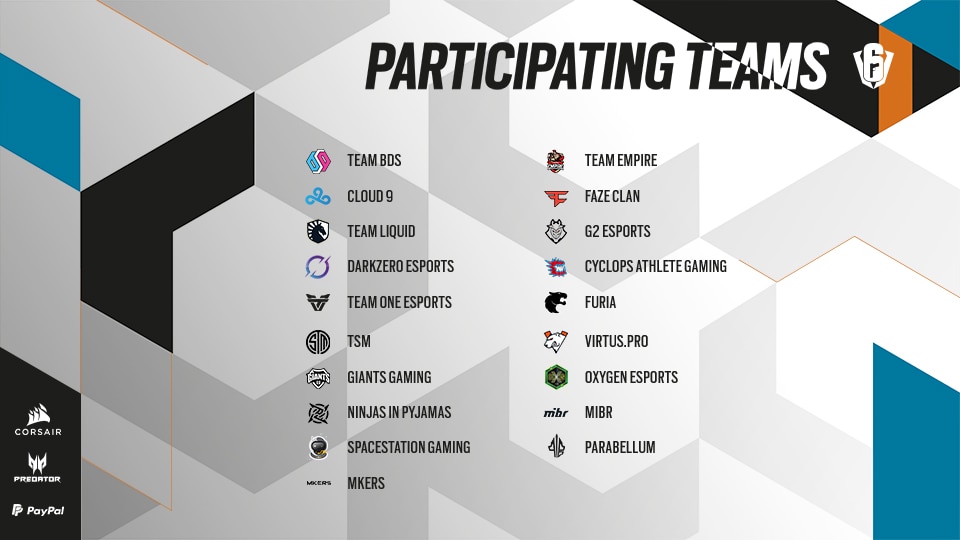 The Six Invitational 2021 will gather 19 teams coming from the 4 main regions of the Rainbow Six Esports circuit, competing in a LAN environment, in France. The health and wellbeing of our pro players, staff, partners and fans is our top priority, this is why the event will be held without any live audience and under strict sanitary safety measures for all its participants. For the past months, we have been working with our partner Live Nation, the Health and Safety Agency ACEPS, the medical assistance agency ISMA and the French Government, in order to develop a controlled, safe and competitive offline environment in line with the guidelines of the health organizations and local authorities. Below are the different actions that will be taken to ensure everyone’s safety. We remain steadfast in our commitment to deliver gold-standard safety measures.

Health and safety measures may be updated up until the event, based on the evolution of the local authorities' guidelines.

During the event:
Players Guidelines

Due to the global pandemic, this year’s Six Invitational will be the first Rainbow Six Siege cross-regional competition since the Six Invitational 2020. We are eager to see how the different regions have evolved over the past year and how they measure up against one another on stage. The Six Invitational 2021 will gather 19 teams and its format has been updated since the previous edition to increase the number of matches and have the most accurate seeding before kicking-off the Playoffs.

All teams will start competing in the Group Stage where they will be dispatched into 2 groups. In total, 81 matches will be played between the four regions throughout the Group Stage. 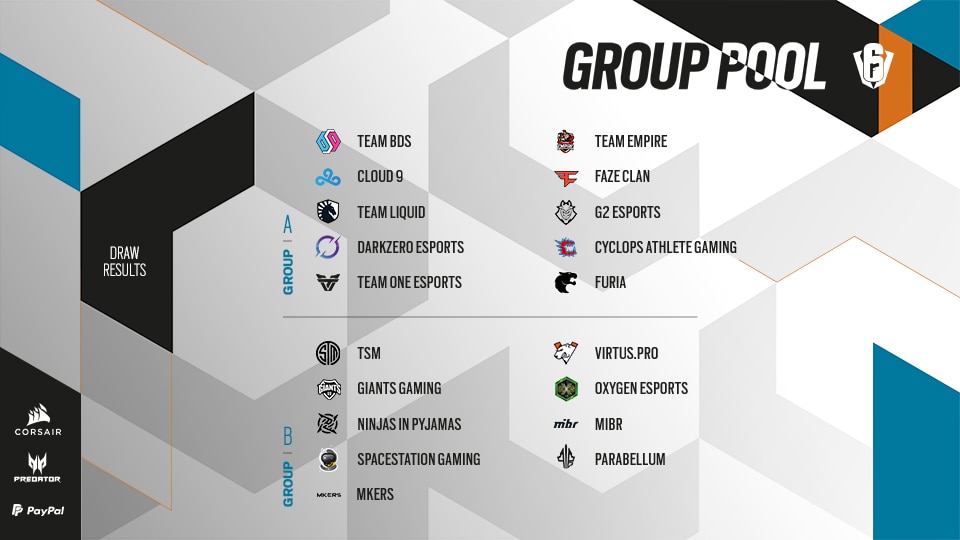 Each team in Group A will play 9 games and each team in Group B – composed of one team less – will play 8 games. The 8 best teams of each group, 16 teams in total, will advance to the playoffs, while the 2 bottom teams of Group A and the bottom team of Group B will be eliminated. Given the large number of matches and the number of teams advancing to the Playoffs, the Group Stage will consist of a Best-of-one single round robin.

This phase will consist of a double elimination bracket. All Playoffs matches will be played in best-of-three. Following the Group Stage, the top 4 teams of Group A and B will battle it out in the upper bracket, while the teams ranked between the 5th and 8th positions in each group will fall into the lower bracket. The Grand Final will consist of a best-of-five match with a map advantage to the upper bracket team and unlimited overtime. 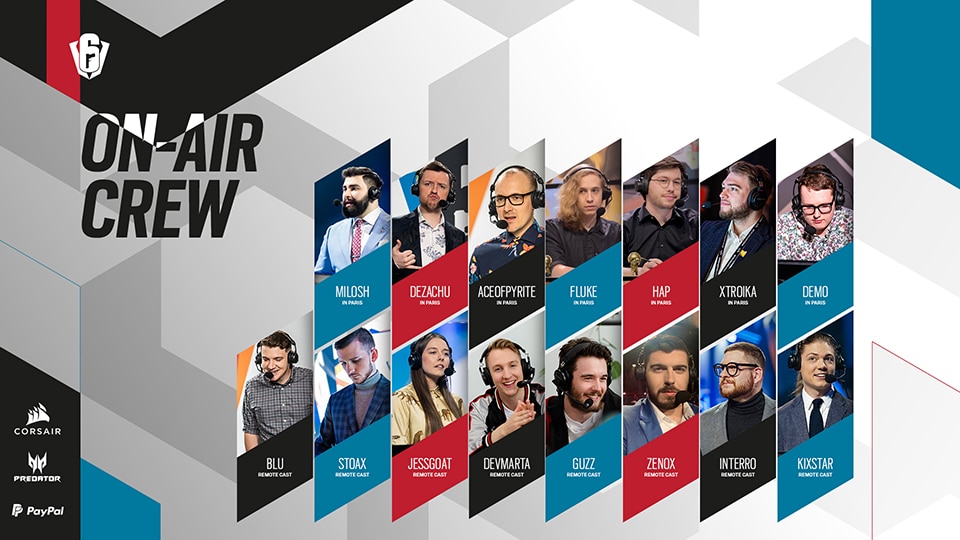 Once again the Rainbow Six Siege communities around the world showed their support to their favorite teams and players by contributing to the Road to S.I. Battle Pass and helped reached the maximum cap set for the prize pool of the competition: USD $3,000,000.

Teams will be playing on the latest Rainbow Six Siege patch. Patch notes are available: HERE 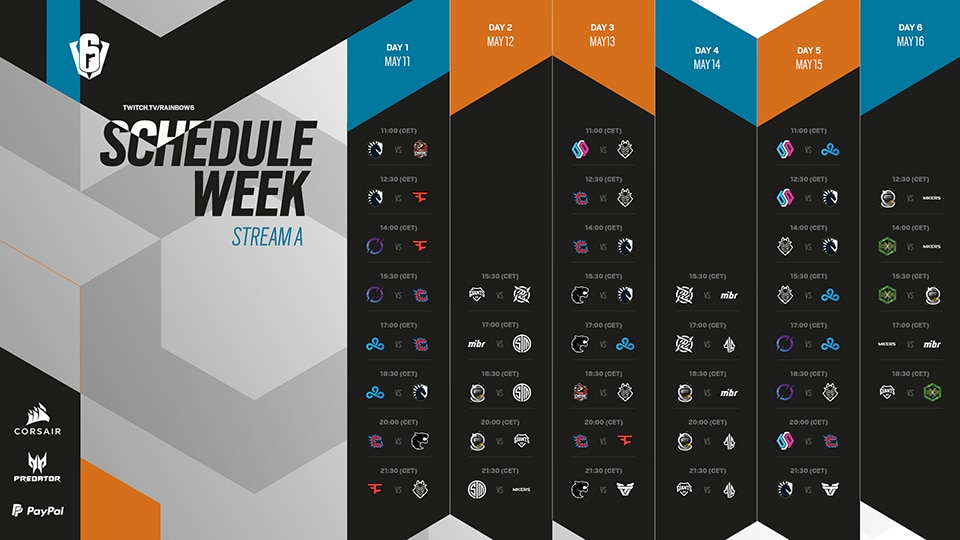 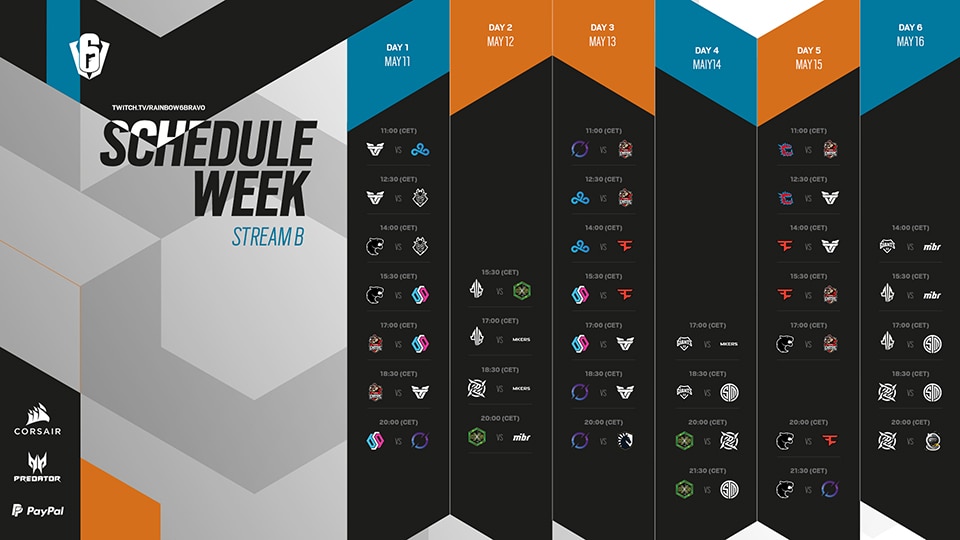 We’re happy to announce that Twitch Drops will be back for the May edition of the Six Invitational 2021. 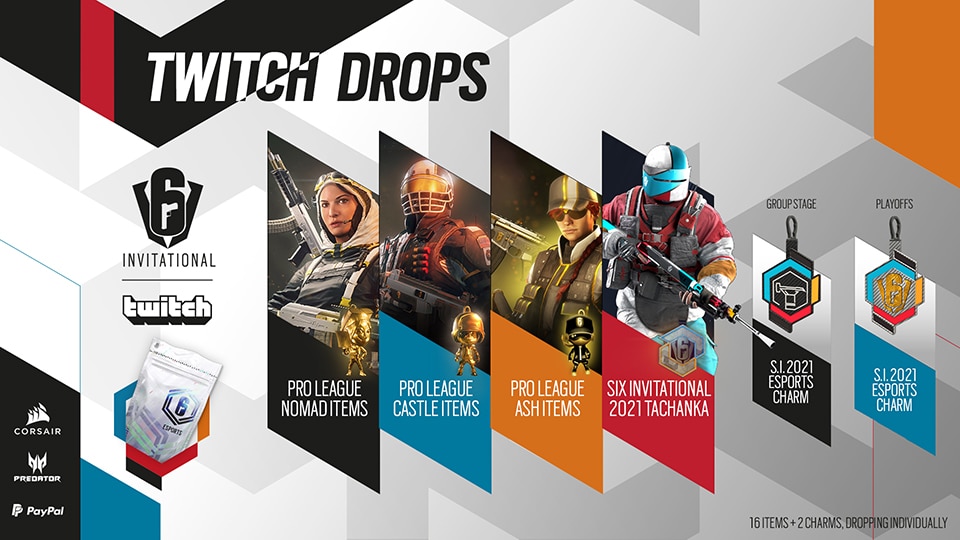 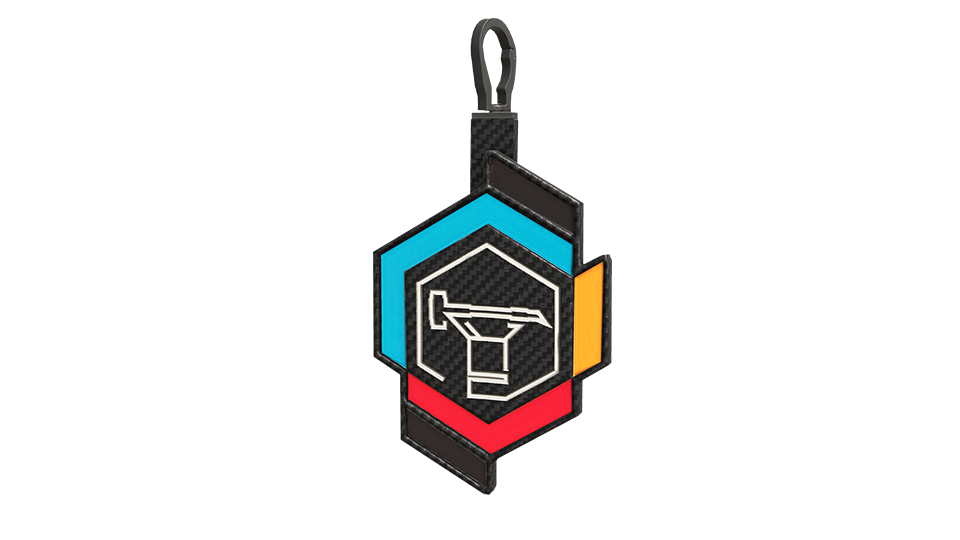 Esports packs are back with exciting items, including a new Six Invitational 2021 Tachanka bundle, for a total of 16 items!

Viewers will receive a pack for every 4 hours watched, with a weekly cap of 3 packs per viewer. Please note, that the watch time will not be carried on from the week of the Group Stage to the week of the Playoffs. Please note that duplicate item drops are possible. 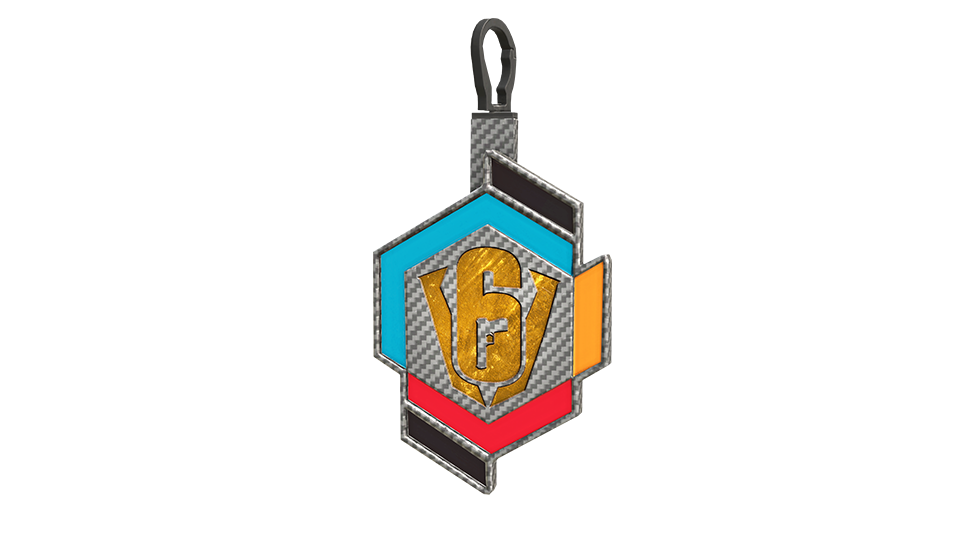 Viewers will receive a pack for every 4 hours watched, with a weekly cap of 5 packs per viewer. Please note that duplicate item drops are possible.

How Drops work
Register your account by heading over to https://drops-register.ubi.com and link your Twitch account to your Ubisoft account. You will then be prompted to opt into the drops feature. Please, make sure that your account is linked before you tune in to the broadcast.

All drops will need to be claimed manually. You can track all the Drops progression on the Inventory page https://www.twitch.tv/drops/inventory. When the Drops condition is reached, you will need to click on the “Claim” button in the Inventory page to claim the reward and continue the progression towards the next reward. Please note that the “Claim” button will be available only 24 hours after the end of the campaign (the final playday of the respective week). The delivery of claimed items will usually be done 48 hours after the end of the week.

More information:
Twitch Drops are activated for all five platforms the game is currently available on: PC, PS4, PS5, Xbox One, and Xbox Series X. You do not currently need to own Rainbow Six Siege to be able to earn drops. If you have your Twitch account linked to your Ubisoft account, and your Ubisoft account has been linked with your console accounts or PC, then you will receive the items when you login for the first time after installing. 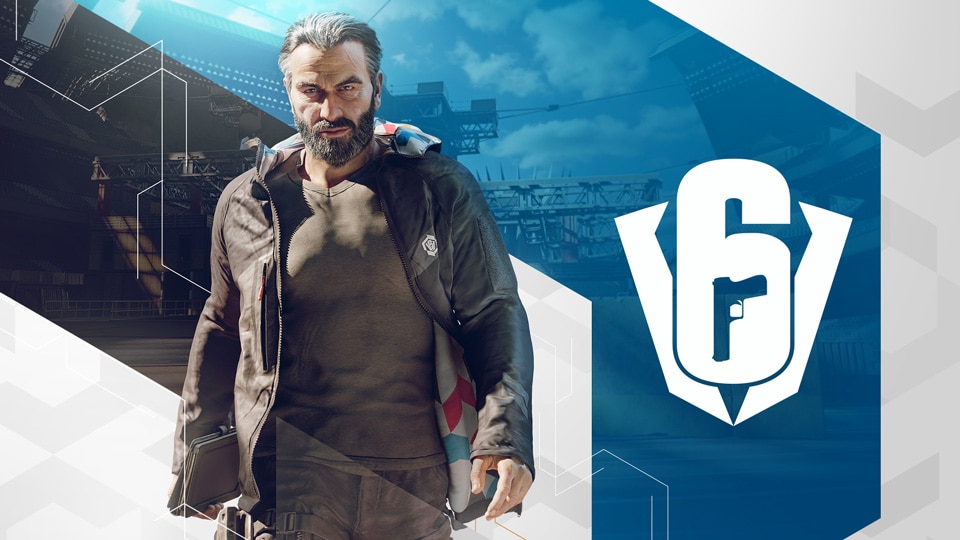 Gear up for the event with the official Six Invitational 2021 jacket, created in partnership with DRKN at https://drkn.com/products/six-invitational-2021-jacket

Celebrate the Six Invitational with up to 75% off Rainbow Six games on Ubisoft Store at https://ubi.li/o1dMi! 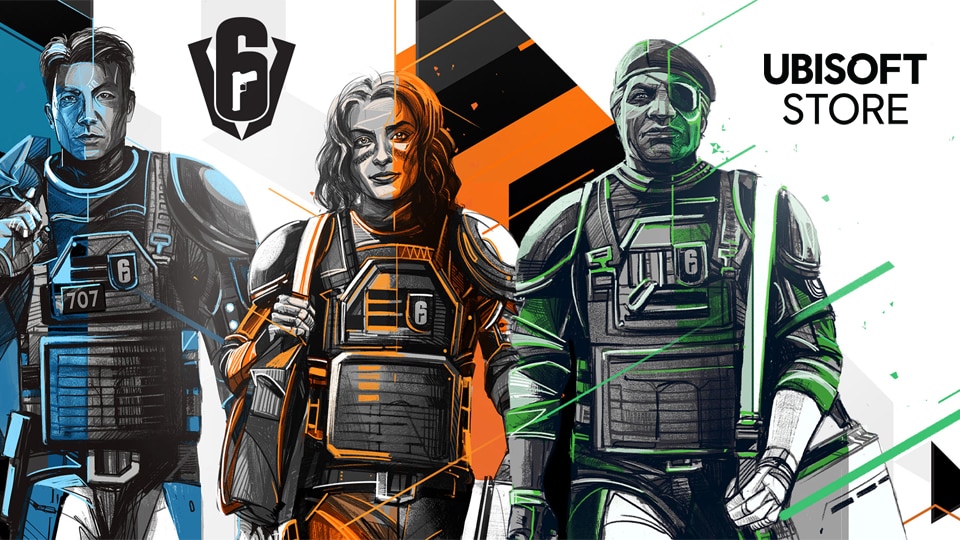 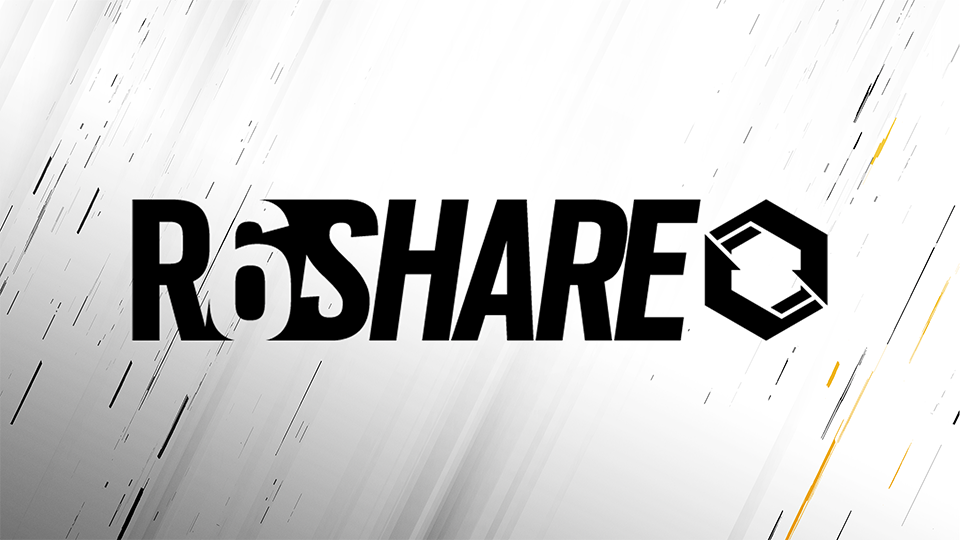 With the Six Invitational 2021 right around the corner, we are excited to celebrate our R6 Share Organizations with 20% off all Pro Team Bundles and Weapon Skins from May 10th to May 23rd. Support your favorite team by customizing your load out!