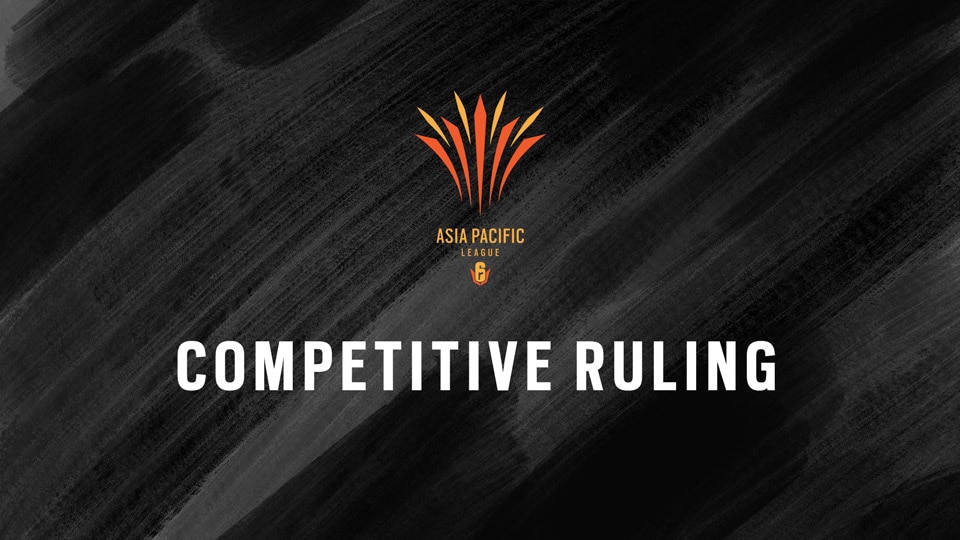 During Playday 10 of the Asia-Pacific North Division on October 22, 2020, unusual conduct was noticed from players on the Cyclops Athlete Gaming team during their match against QConﬁrm. Various actions made by their players brought into question the seriousness with which they were playing this league game. Following the conclusion of the match, XQQ’s statement on Twitter suggested that the team intentionally threw the match because they did not have anything to gain from winning.

This situation revealed a flaw in the APAC North Division point system whereby Cyclops Athlete Gaming required a match loss against QConﬁrm in order to secure a higher position in the Stage standings. A revision of the Rainbow Six APAC League North Division system is in process for Season 2021 to ensure a situation like this can no longer happen.

Nevertheless, the investigation conducted with the help of our partner in the region showed that Cyclops Athlete Gaming acted in a non-competitive manner that strictly goes against the Global Rulebook. The team itself has conﬁrmed that they have read and understood the rulebook and no attempt was made to contact Tournament Administration before the action had taken place on Playday 10.

The competitive ruling is as follows:

As per the oﬃcial Global Rulebook - Annex B - Penalty Index: Match throwing may be the action of purposely avoid competing at one's best ability outside of the cases of match ﬁxing. Examples of match throwing include, but are not limited to, losing purposely to obtain a lower seed or rank or purposely losing to dodge an opponent in a competition bracket. Overall, the intention behind forbidding match throwing is to provide a consistent minimum level of competitiveness and entertainment throughout the Rainbow Six Circuit.

Whilst we understand that Cyclops acted in order to gain the best position in the Stage, their decision to throw the match against QConﬁrm is strictly and explicitly against the intention of the rule as stated in the rulebook: “To provide a consistent minimum level of competitiveness and entertainment”.

Consequently, it has been decided to issue a 6-month-long suspension against XQQ for being responsible for the team’s decision making, effective immediately and until 20/05/2021, and to issue a competitive fine of USD $5,000 against Cyclops Athlete Gaming.