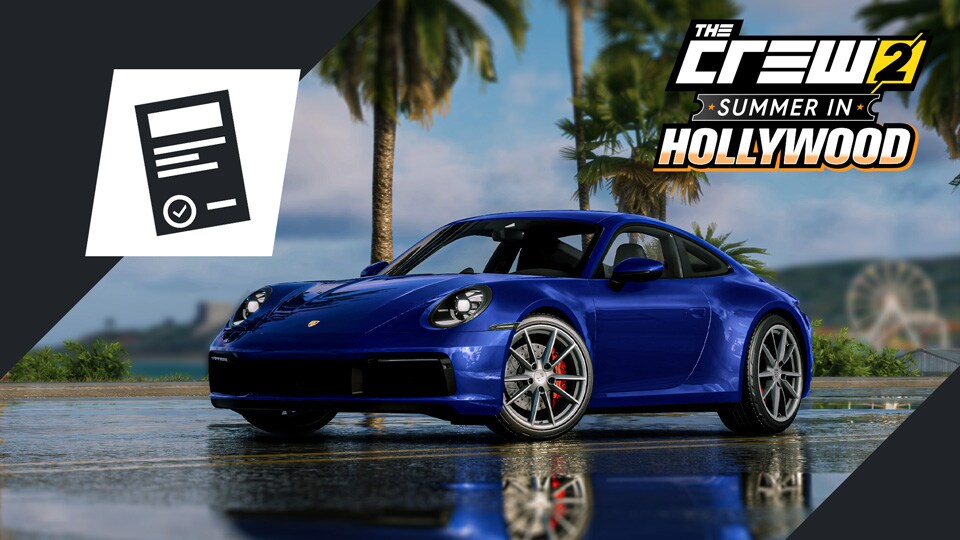 With the release of The Crew® 2 Summer in Hollywood, we are introducing a variety of new content, improvements and fixes to your game experience. Please see our patch notes below for the most notable changes.

For more information about the The Crew® 2 Summer in Hollywood update, check out our dedicated article.

This patch will be deployed via a maintenance starting at 10am Paris time on Wednesday July 8, and your game client will automatically update to the latest version once it is live. Please follow our official channels to stay up to speed as to any changes.

• [Add] 48 new vanity items - to be released on a weekly basis through the shop or as LIVE Summit rewards.

• [Fixed] Action names & descriptions are broken when accessing Hobbies from the Summit menu.
• [Fixed] Incorrect vehicle type listed when language changed to Arabic.
• [Fixed] A to B Actions can be completed by using the Photo Mode timeline.
• [Fixed] Number of Stars displayed in animation when first accessing the Hobbies menu, is not the same as the Total Stars Earned number.
• [Improved] Visual Parts Actions now require fewer parts, and are easier to complete.

• [Improved] The “LIVE Battle Influencer” Action has been changed to “LIVE Battle Money”, and now requires the player to earn Bucks to progress rather than Followers to make it fairer to those at ICON 9999.

o Any previously unlocked Stars from this Action will be kept, but progress will be completely reset. Tiers unlocked for a second time will still award new Stars.

o & more to be revealed on a regular basis!

• [Fixed] Wheelie is detected after fast fav from Motocross to Monster Truck.
• [Fixed] Ground vehicles can move forwards and accelerate to 719 km/h in reverse gear.

• [Improved] Reduced Air Nitro acceleration on all disciplines by 50%, except MT & MX which have a smaller reduction of 15%.
• [Improved] Enhanced MX handling featuring new tire-model, improved suspensions and rider animations. New follow cameras have also been implemented, for a smoother feel and better track readability.
• [Fixed] A water glitch can be seen in underwater tunnels while driving hovercrafts and boats.

• [Add] 7 brand-new events, to be released in PvE progressively alongside the corresponding special themed LIVE Summits.
• [Fixed] Players are able to hop over walls with TC Bikes on Miami Race Track and on The Giants Chaebung Cup.
• [Fixed] MT event Wreck and Havoc lists "Get -1 Points" as objective.

• [Fixed] Actvities tab UI overlaps with other tabs, when skipping over it in the Main Menu.
• [Fixed] Black dot appears after using Photo Mode or LIVE Replay.

• [Improved] In the audio options, sliders sound changes in volume for each channel.

• [Fixed] The Stats page has now been restored.