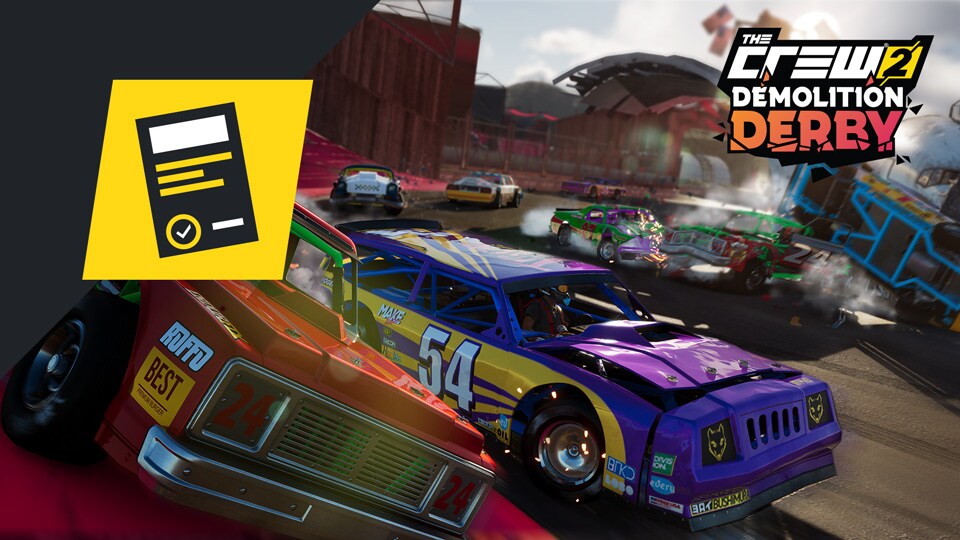 With the release of The Crew® 2 Demolition Derby, we are introducing a variety of new fixes and improvements to your game experience.

This patch will be deployed on December 5th at 12:30pm Paris time on all platforms, after a short maintenance of our servers, and will be automatically downloaded when live. Please follow our official channels for the latest information.

Check out the most notable changes with Patch 1.2.0 below.

For more information about the main features & content coming with this free update, check out our dedicated articles about The Crew® 2 Demolition Derby and the newly introduced Live-Battle PVP mode.

In addition to the December vehicle drop and 4 Demolition Derby vehicles, we’re thrilled to reveal the final 8 new vehicles added with this update!

First of all, we will be adding 3 new vehicles to the timeline to reward your progression through the game with exciting new drives:

The « Elite Bundle » will feature 3 exclusive vehicles for a limited time:

Finally, 2 additional vehicles will be joining the shop catalogue, accessible both with Crew Credits and Bucks:

Don’t forget that Season Pass owners have a 20% discount on all purchases!

With the introduction of the Live Battle PVP mode, it was important for us - in addition to our current efforts on the leaderboards cleaning - to develop a fair competitive experience to all players. To do so, the dev team has been working on an update of the vehicle collision model (see below for more information), which includes an important focus on the impact of obstacles to your vehicle speed and behavior. Indeed, where it was sometimes more effective to bounce head-on off a wall or slide along it thanks to limited friction, the game will now encourage players to use the best trajectories to get the best results. We will continue to improve this model through further updates.

With this improved collision model, we also reworked the behavior of vehicles when bumping into static elements or traffic. Our objective is to offer a more realistic behavior that would offer a coherent reaction based on the impact source and strength. For instance, traffic cars’ behavior following a hit will be more predictable and should no longer overlap the player’s vehicle. We also improved the deformation model to better reflect player’s driving style and reduced dramatically the crash cam occurrences, along with a reduction of the Back-on-Track time. Vehicles will automatically repair over time when not being hit or whenever you join an event.

In our will to continuously improve the driving sensations of the game, we are introducing a reworked version of the Rally Raid vehicles handling. Vehicles are no longer being forced back on the track, especially when being on air, leading to longer jump times and potentially rocky landings. The drift sensations are being improved on both asphalt and dirt, giving you a more challenging gameplay experience where your trajectory really matters. Our goal was to provide a more realistic feeling but worry not, low v-level performances have also been boosted to make sure you will not remain stuck in slopes!

To provide a better experience at any time of the day, we have also been working on the illumination system of the game. To do so, we improved both the way lights are now projected but also how they are displayed to the player, reducing visual gameplay obstructions. A gamma slider is now available in the game menu to allow players customizing their display preferences, this one will be prompted at your next game launch.

With the great variety of events and the FastFav feature, our objective is to offer the best experience for all motorsport enthusiasts. With this update, we will be introducing a new feature allowing PC players to customize their key mapping for each type of vehicle. Behavior & feeling is very different between a car or a plane for instance, you will now have the opportunity to completely adapt your controls accordingly.

The driving wheel Logitech G920 is now also officially supported in The Crew® 2.

Available since the release of The Crew® 2 Gator Rush, the The Crew Hub platform is also evolving on December 5! In addition to a revised “Best” sorting algorithm, to better promote quality content from the community, we will also be adding new features and improvements to this page. Filters are now available, allowing you to only display screenshots featuring specific families, type of vehicles or even brands! A search feature is also accessible to check your favorite artist creations. Your gallery is also evolving with all your favorites and friends’ screenshots, check it out at https://thecrew-hub.com!

• [Fixed] Invite to the crew option is inaccessible when a timer is displayed.
• [Fixed] Crew members are unable to return to freedrive until leaderboards screen is closed.
• [Fixed] Blank persistent notification may appear when playing in a Crew.

• [Fixed] Bikes not stopped by fences.

• [Fixed] Flying asset can be noticed during the Portfoliage Event.

• [Fixed] MERCEDES-BENZ X-CLASS vehicle might be displayed twice in the vehicle selection menu.

• [Fixed] Event may be triggered unintentionally when freediving close to it.

• [Improved] AI has a better control of the Hovercraft and can avoid obstacles more efficiently, especially in ACE mode.

• [Fixed] The Mini map’s ribbon of the MISSISSIPI EVERYZON Event is not correctly updated during the race.

• [Fixed] Some events may be triggered unintentionally when freediving close to them.

• [Fixed] Brightness is too high during countdown cinematic in cockpit view.

• [Fixed] Player is respawned to the starting area of the StormX Arena when performing a “Back-on-Track”.

• [Improved] AI has a better control of the vehicle an avoid obstacle more efficiently in the WRECK AND HAVOC Event.

• [Improved] Added fences to avoid players going out of tracks too easily.

• [Fixed] Low quality textures in the distance (city view) when exiting Miami House.
• [Fixed] The helicopter may be submerged in the ground.
• [Fixed] New vehicle layout is not saved upon exiting and re-entering HQ.

• [Fixed] Plane's propellers and Car's wheels can be seen rotating while in the map with a near camera.