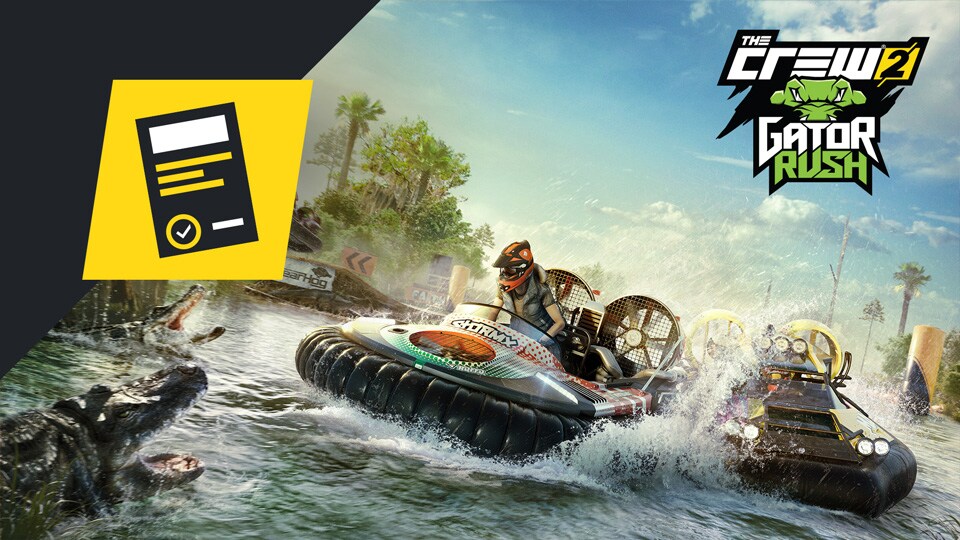 Along with the release of The Crew® 2 Gator Rush, we are introducing a variety of new fixes and improvements in order to continue to improve your experience with the patch 1.1.0.

This patch will be deployed on September 26th at 10 am Paris time on all platforms, after a short maintenance of our servers, and will be automatically downloaded when live.

Discover today the highlights and full details of this new version!

Master the Hovercraft, on both land & sea.

In the heart of the southern swamps, the Off-Road family has found a brand-new way to impact nature while having a blast with hovercraft races. Behind the wheel of these air-cushion rockets, both water and land make the perfect surface to slide and speed while bouncing on obstacles and competitors. This brand-new motorsport discipline has taken over the entire US, transforming some of the most iconic places into dedicated competition spots, from the lush and muggy Bayous to the crystal-clear waters of the Western lakes. Racers can discover unique vehicle handling, master the most varied terrains, and be part of a new wave of champions!

For players who thrive under extreme pressure, Gator Rush is bringing an extra difficulty level: the Ace mode. All 130+ challenges included in The Crew 2 are taken to the next level, allowing players to get a taste of being part of the elite. With great challenge comes great reward: the new “Legendary” loot parts award better performances and exclusive affix bonuses, allowing players to enhance every ride in the most unique and customized way.

Compete in 20 new Activities , all across the USA

Hovercraft isn’t the only new challenge coming in The Crew 2 this September. Additional Hypercar, Touring Car, and Jetsprint events will fire up the competition, while the latest episode of the Live Xtrem Series will take players through an exhilarating threefold race, including Rally Cross, Hypercar, and Hovercraft sessions. New Skills will be available in the open world bringing new spots to explore and allow for some fast and fun progression.