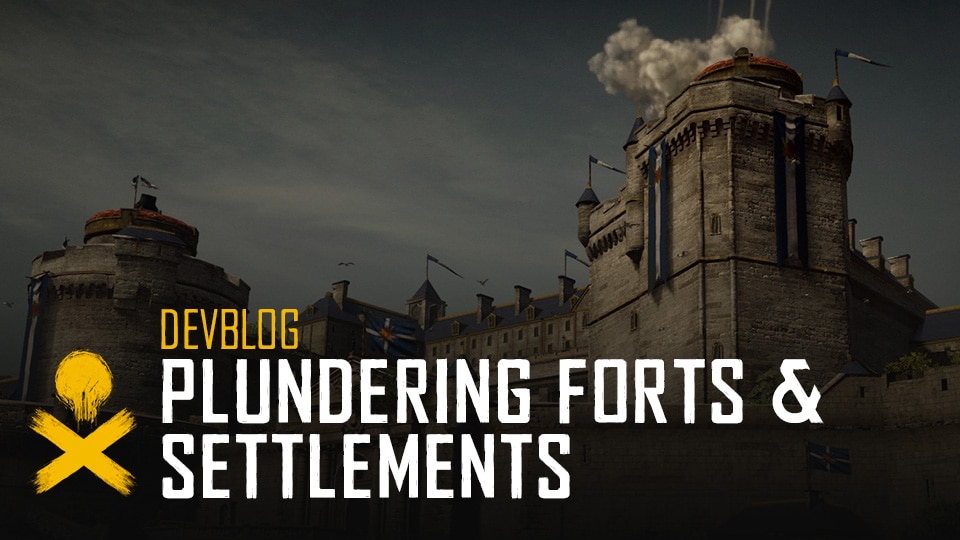 If you’ve been following our previous DevBlogs, you now have a good idea of possibilities for your ship’s loadout, how to provision for a voyage to keep the ship’s weapons in working order and your crew from mutiny and received a crash course in ship-to-ship combat. It’s time to look past the horizon for bigger fish to fry!

Captain, a small disclaimer before proceeding. We are excited to be giving you an early look at Skull and Bones. Please be aware some of the details shared here may change before release.

While you and your crew are exploring the seas in your ship, you will encounter land. And where there is land, you can be sure to find people living in encampments, settlements, and even pockets of civilization.

The locations you encounter can be roughly categorised into forts and settlements. All of them are controlled and run by various local factions. Most will allow you to conduct trade and buy supplies if you are on good or at least neutral terms with them. The locations are further categorised into different tiers from one to three. Higher tiers correlate with the types of resources and level of resistance that can be expected. If you are starting out and your vessel’s armour and armaments haven’t been battle tested, you will want to stick with the lower tiers until you and your ship is more capable.

We know the buccaneers in you will be tempted to take everything that isn’t nailed down, but before we start talking about plundering, let’s have a quick rundown of what you will be getting yourself into. 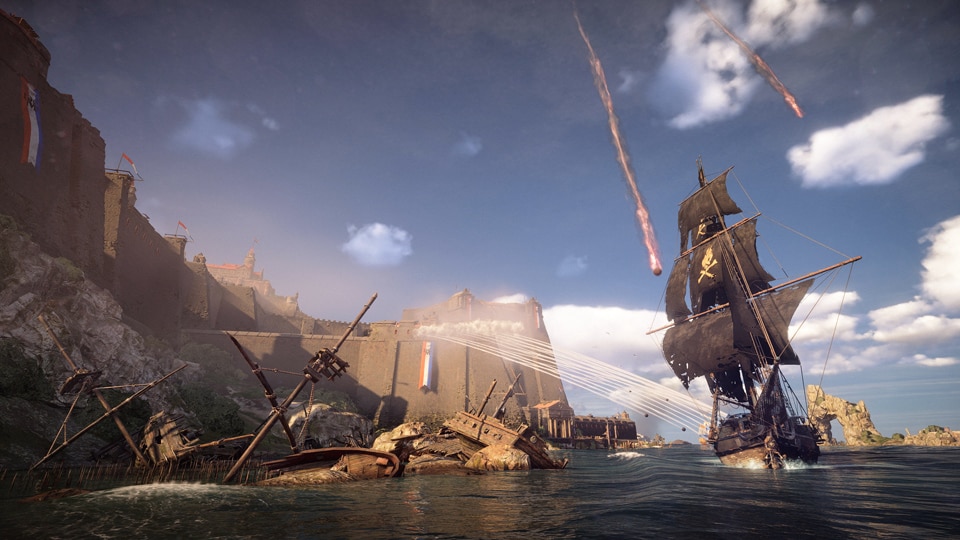 As you sail around and explore the Indian Ocean, you’ll discover local settlements dotted along the coast lines. Some are little more than temporary camps while the more established ones are comparable to towns, and the largest ones serve as major commerce hubs or seats of power. Settlements are where people can conduct trade or opportunities for pillage if your pirate heart so desires.

Some of the settlements are designed to facilitate the harvesting of raw resources or refining them into valuable goods for trade and export. If you are looking to make an honest living, materials and commodities can be bought and resold for trade or for your use in crafting.

Merchants like to frequent these places to trade and load up on goods for transport to their intended destinations along established and predictable trade routes. Without spelling it out for you, a smart and enterprising captain such as yourself may find that bit of information useful.

Here are some production sites you may encounter. 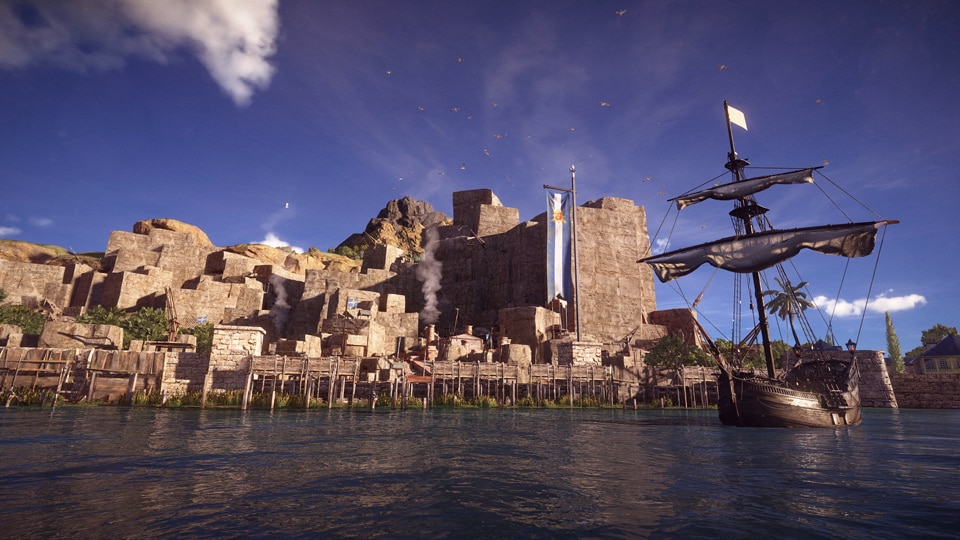 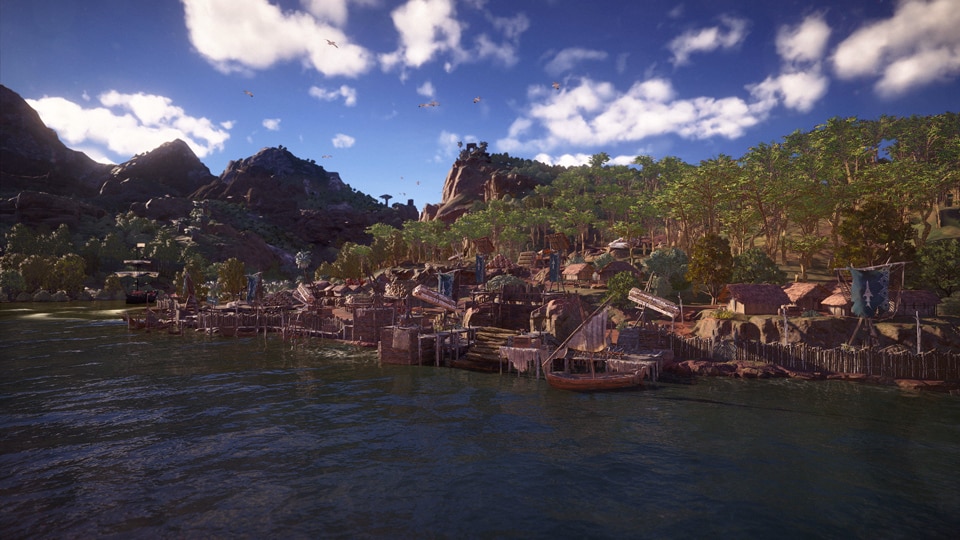 Before we move onto forts, let us talk about outposts. Outposts are unique in that they are not suitable targets for pillaging. They are a neutral area where you can dock and repair your ship, resupply, or simply go ashore to stretch your weary sea legs. Here, you can often encounter representatives or leaders from different factions who are also passing through. There are opportunities for trade and if you are lucky, they may be trying to offload rare crafting blueprints. Captains interested in work may also find opportunities to pick up contracts.

There are stories of some outposts in remote locations being used by pirates and smuggling types to stash and secure their ill-gotten gains. Should we come across these locations, you can also use these stashes to secure your own valuables or simply free up more cargo space to keep pirating!

Forts are major settlements with a large population that has access to wealth and resources. With all the money that flows into these seats of power, they are inevitably well-armed, well-defended, and have the ability to call in reinforcements. Even the best-equipped pirate ships will find pillaging them difficult. These pockets of civilization are protective of their surrounding waters, and do not welcome pirates. You are not able to dock or trade with forts and they will attack on sight.

Plundering a fort will be far more challenging and not for the unprepared. The area around a fort is usually protected by multiple defensive towers. If you want the plundering to go smoothly, those and possibly other defences will need to be dealt with in advance or at some point during the attack. 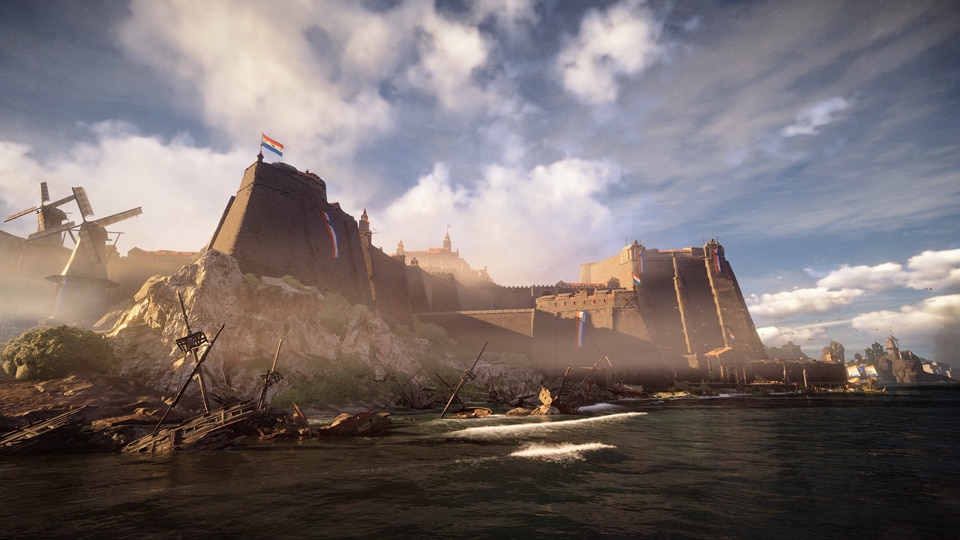 When you are ready to take that next step in your rise to becoming an infamous pirate captain, let's plunder them of their riches!

All those riches and goods, they are calling to your pirate soul, aren’t they? Apart from outposts and dens, all locations can be plundered! Before beginning, take your time to scout your locations in case a quick getaway is needed. Use your spyglass to scout and gather useful information and scope the place out. Learn about the kinds of defences or reinforcements that can be expected, which faction runs the place, and most importantly, what kinds of loot you will get. You could skip the whole reconnaissance thing if it’s not your style but bear in mind that you will not know what you’re going up against and may end up biting off more than you can chew. We know some captains like to live dangerously, so onward!

Another factor to consider is the weather and time of the day. For example, during night-time, you will find ships anchored nearby with their crews asleep. If attacking defenceless ships are your thing, you can wake them up with cannon fire before they attempt to flee.

To begin a plunder, sail towards a location of your choice and you will have the option to begin when you are within range. Once you begin a plunder, any static defences like guard towers will take notice of our presence and will begin to fire on the ship. Additionally, the fort or settlement will begin signalling for reinforcements. The situation and your odds of survival can change rapidly once your attack begins, so make sure you’ve brought enough repair kits to keep the ship seaworthy! 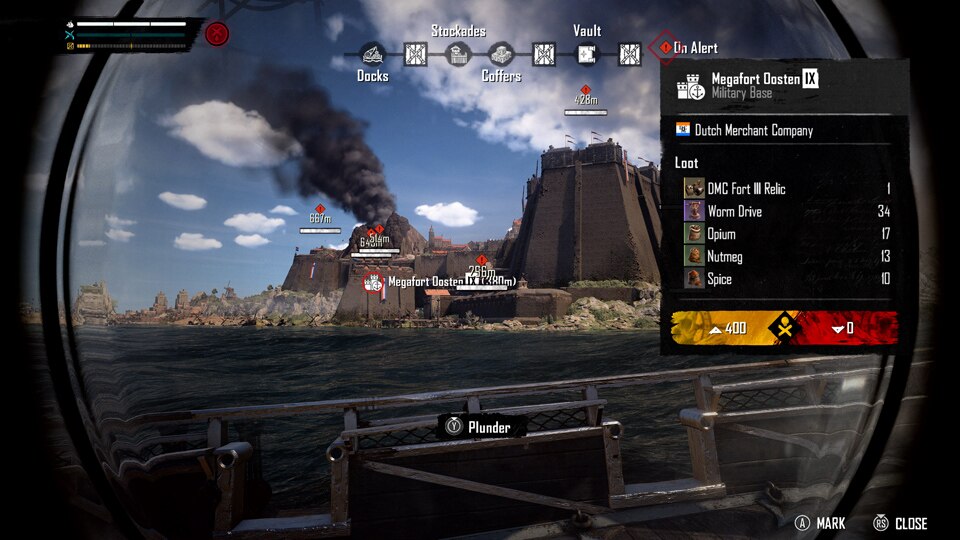 Be prepared for resistance from land-based defences like guard towers or reinforcements arriving from the sea to stop your pillage. Something to note, the defensive response will be proportional to the size of the attack. Captains who are working together will trigger a more robust defensive response. 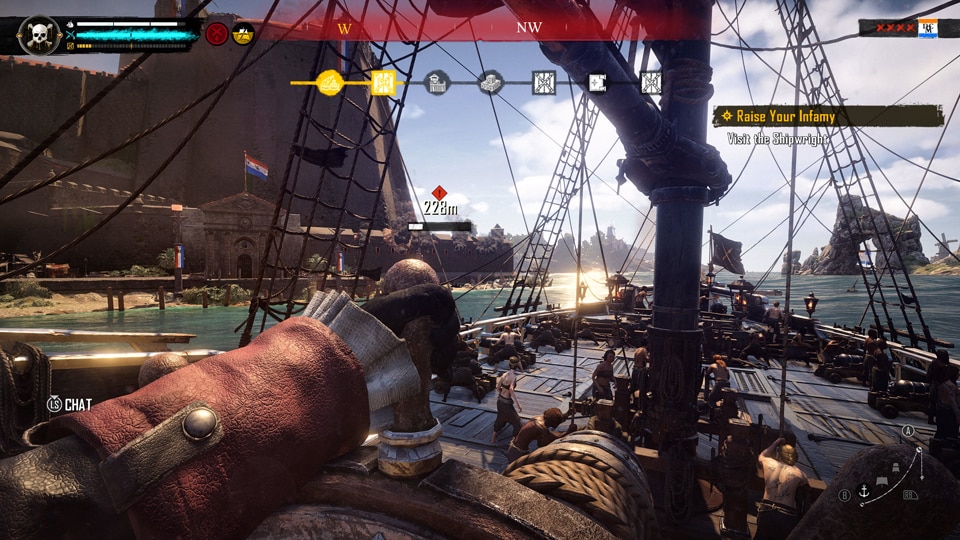 Once the plundering begins, you will see a reward track that provides you with a rough idea of how things are progressing. As captain, you will continue to support them from your ship by remaining in the general area, eliminating static defences, and neutralising reinforcements that arrive to stop us. At key points, the plunder that has been looted thus far will be sent back. We can retrieve the loot right away or wait until the plundering is complete.

After starting a plunder, there are several possible outcomes.

Even if the pillaging is successful, we shouldn’t linger in the area longer than needed to recover the booty. Late-arriving reinforcements will continue to trickle in. Set sail for safer harbours where we can admire our newly acquired loot and money in peace.

Congratulations on a successful plunder, captain! Completing a plunder will increase your infamy and give you a wealth of loot in materials, commodities, and silver. Once a fort or settlement has been plundered, you will understand if they are not interested in speaking or trading with you for a while.

No one said becoming a legendary pirate captain will be easy and you will step on many toes to get there. Aggressive actions such as pillaging a faction’s settlements, forts, or sinking their ships aggravates a faction. Aggravated factions become hostile and will attack you on sight. The good news is, time can heal many wounds, and smaller transgressions are forgotten relatively quickly. The bad news is, if you go on a pirating spree sinking their ships and pillaging their settlements, that can make a faction understandably angry, and they can remain hostile towards you for a while. So, what can you do?

You can find safe harbour at a den or outpost to dock and lay low to wait it out. Or you can continue to sail and explore while trying to avoid the faction. If you go that route, take care to not engage in actions that will antagonise the faction any further. But there is another way to convince a faction to overlook your transgressions. 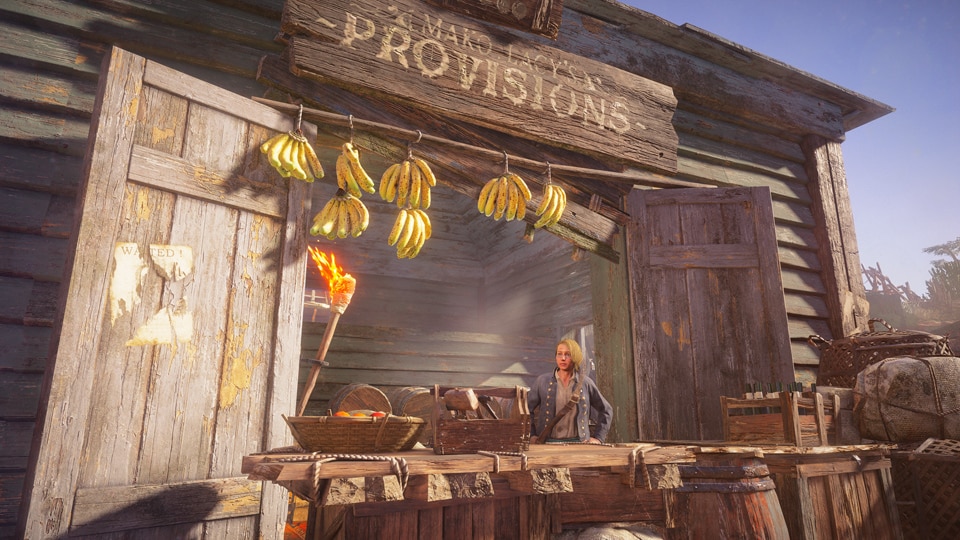 If you want to make amends with an aggravated faction, you can do one of the following:

Once the debt has been settled or forgotten, you will be able to interact with the faction again. Until next time...

Well captain, you now have an idea of how to load out your ship, take care of your crew, and how to engage and plunder loot from both land and sea. Are you ready to start your rise to infamy to become the next kingpin?

Keep in touch and stay up to date on the latest news, information, and developments for Skull and Bones by following us on Twitter, Facebook, and Instagram. 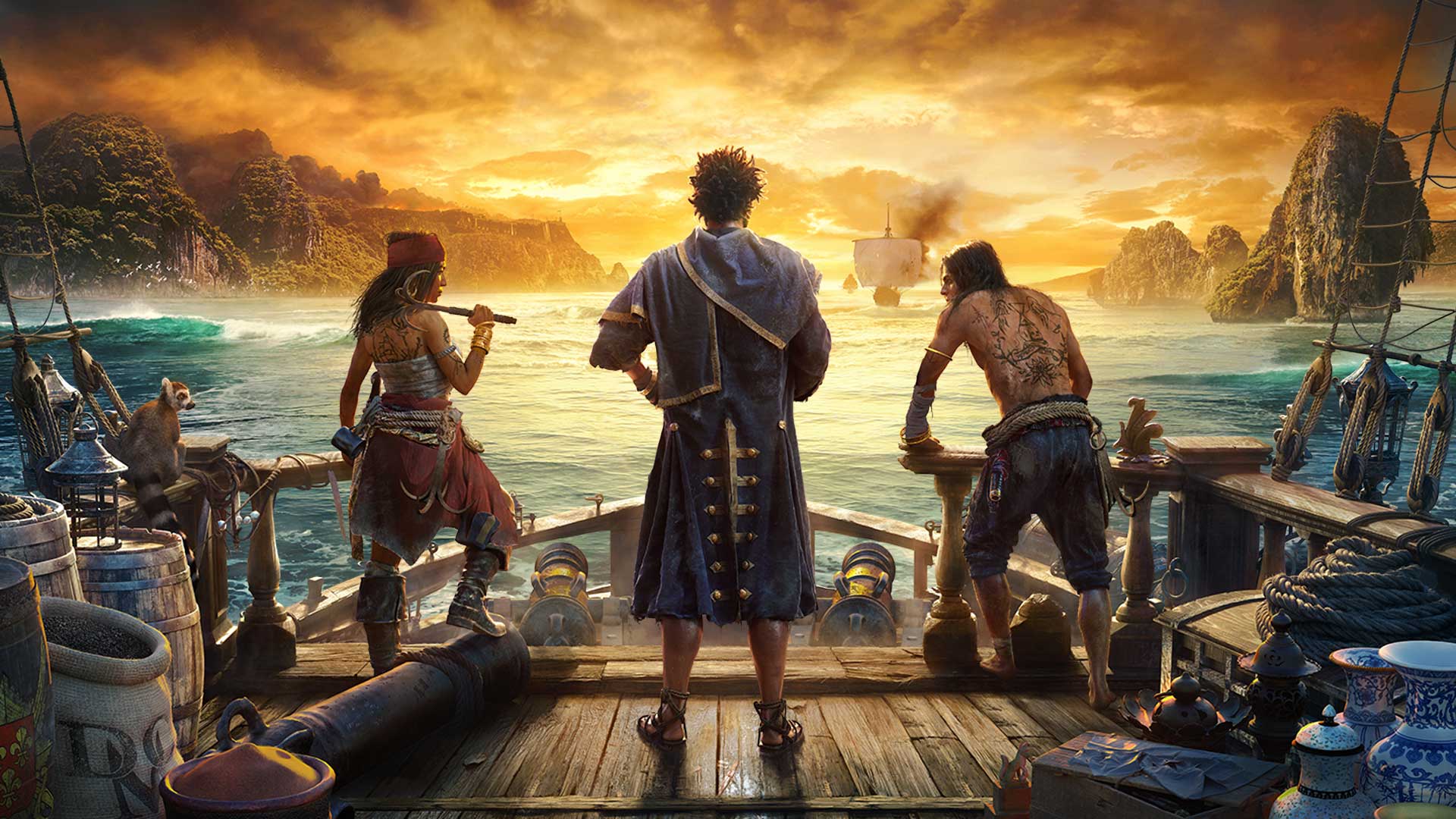 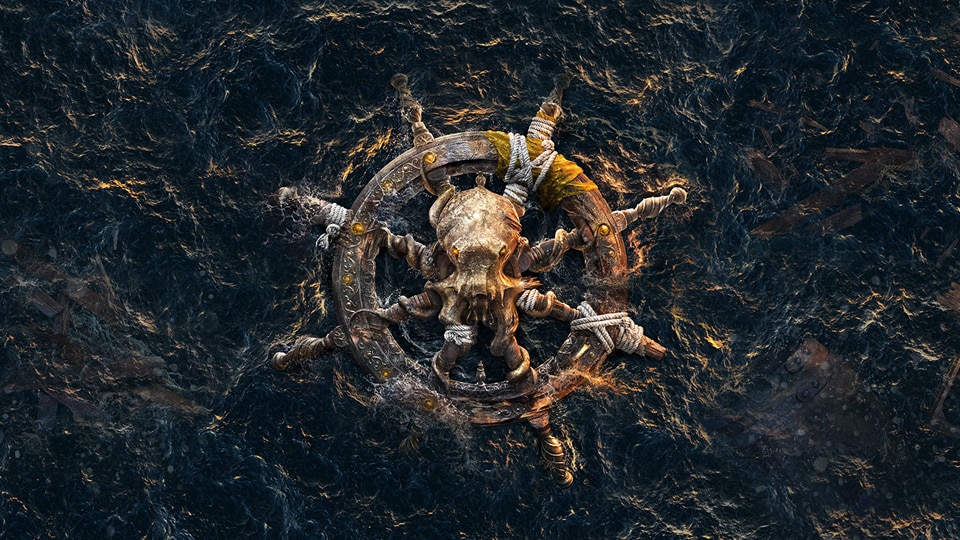