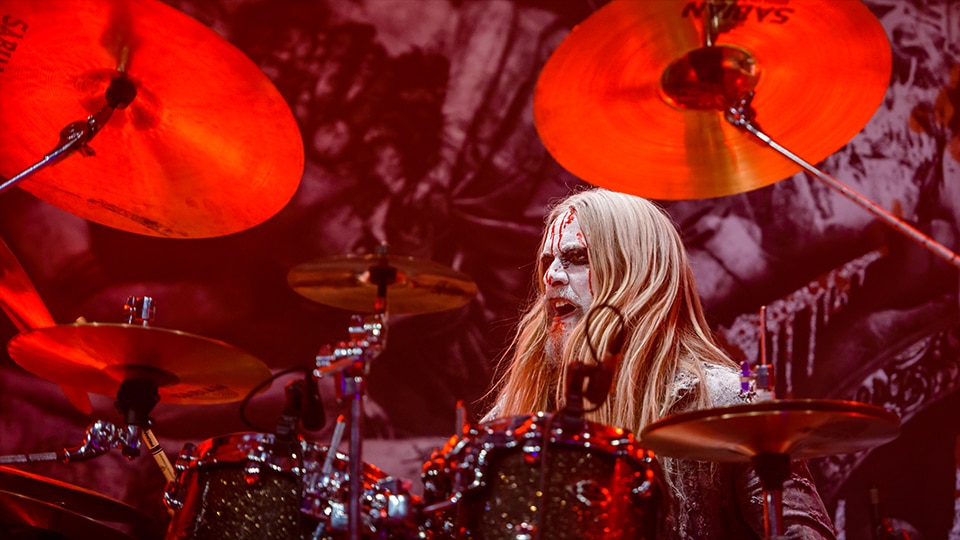 Blast beats are basically what they sound like: drum beats played so fast and controlled, they sound almost like an explosion of fireworks or automatic weapons. With early origins in jazz, punk and grindcore (many credit English grindcore band Napalm Death with coining the term in the 1980s), blast beats are the cornerstone of extreme metal drumming. These beats come in many different varieties and have evolved throughout the decades to become faster and more precise.

Traditionally, blast beats are single-stroke rolls that alternate between the kick and snare drum, with the ride or high-hat cymbal playing in unison with the leading kick drum. Think of a polka beat, but sped up to 180 beats per minute or higher.

Really, there's no better way to understand blast beats than by listening to them within the context of a song. Swedish death metal supergroup Bloodbath (featuring Martin Axenrot and Mikael Åkerfeldt of Opeth; the latter replaced by Nick Holmes in 2014) uses blast beats effectively without overusing them, so they really stand out. For example, the blast beat at 1:45 in "Ways to the Grave," performed by Axenrot's predecessor Dan Swanö on the 2002 album Resurrection through Carnage, comes in right after a section where the drums drop out. The break in the drums builds tension, so that the blast beat kicks in, it sounds especially hard-hitting and explosive.

Axenrot uses blast beats in similarly impactful ways on "Bastard Son of God," from Bloodbath's 2004 album Nightmares Made Flesh. He precedes the blast beat at 0:55 with a soloed two-second drum fill; the brief pause in the guitars and vocals makes the ensuing blast beat that more powerful and attention-grabbing. Axenrot uses a different approach to introduce the next blast beat at 1:54, building the tension more slowly. After a ten-second pause in the drums as the dissonant guitars and vocals create a wall of sound, he gradually fades in a cymbal swell directly into the blast beat, giving it an atmospheric black metal feel with an almost otherworldly effect.

While Bloodbath tends to focus on traditional blast beats, other common blast beats include the hammer blast and the bomb blast. Unlike traditional blast beats, which alternate between kick and snare, the hammer blast uses single hits on the kick and snare played in unison. Popularized by American death metal stalwarts Cannibal Corpse, bomb blasts are the same as hammer blasts, except the kick drum plays twice as many hits as the cymbal and snare. The list of blast beat varieties goes on and on, but their purpose is essentially the same – to take the energy level of a song from zero to maximum.

AUTHOR BIO: Leila Abdul-Rauf is a multi-instrumentalist and composer based in Oakland, CA. Leila is guitarist and vocalist for death metal band Vastum and ethereal post-punk band Terebellum. She also composes and produces ambient music under her own name, with electronic trio Ionophore, and with synth-folk duo Fyrhtu. She has toured internationally and is a private guitar and voice teacher in her spare time.