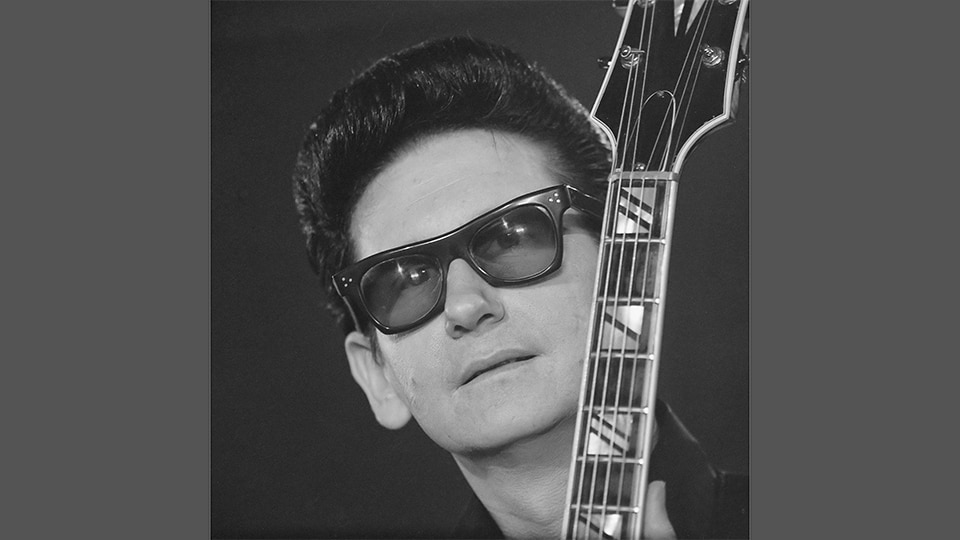 Roy Orbison's "The Comedians" and "She's a Mystery to Me"

Roy Orbison's 1989 comeback album Mystery Girl was his first widely acclaimed release since he reached international stardom in the early 1960s with a string of top-ten hits including "Crying," "Only the Lonely," and "Oh, Pretty Woman." Sadly, Roy didn't live to see Mystery Girl's huge success – Virgin Records released the album less than two months after his untimely death at age 52. However, Roy was on a roll until his very last breath: having co-founded the supergroup The Traveling Wilburys with George Harrison, Bob Dylan, Tom Petty, and Jeff Lynne just a year earlier, his posthumous album yielded the global hit "You Got It," co-written with his fellow Wilburys, as well as a cover of "The Comedians" and the U2-penned "She's a Mystery to Me," on which Roy delivers his signature impassioned singing style and a unique take on the originals.

Originally written and released by early punk/new wave icon Elvis Costello, "The Comedians" tells a story about abandonment and heartache, with a vocal melody that builds slowly between each of its verses, and climactic choruses that meld with a soaring horn section. Roy's version strips down the upbeat vibe of the original, with a more down-tempo beat and minimal guitar chords. The constant march of the snare drum has a similar feel that made his 1962 hit "Running Scared" famous (and also brings to mind Maurice Ravel's Boléro). Alex Orbison, Roy's youngest son, called it "one of the best 'Orbison' songs that Roy did not write, if not the best."

How "She's a Mystery to Me" came together was true synchronicity at work: one night in June 1987 while on tour, U2 frontman Bono fell asleep to the Blue Velvet film soundtrack which included the ghostly "In Dreams" by Roy Orbison. When Bono woke the next morning, he had a tune in his head that he thought was from the soundtrack. When he realized it wasn't, he wrote down the basic structure of the song, and performed with U2 at the Wembley Arena later that night. After the concert, Roy Orbison surprised the band with an unannounced visit backstage, during which Bono played the song for him. The two got together later to record the song, which inspired the album title, Mystery Girl. A mesmerizing guitar arpeggio repeats throughout the song's verses, while the chorus features Roy's emotion-filled upper vocal register, his signature vibrato filling the soundscape of this haunting ballad.

One wonders what great music "The Big O" and "The Caruso of Rock" (it's not often that a rock star earns two nicknames!) would have continued making if he had lived to old age. Roy Orbison's country-tinged rock and roll with his motionless stage presence, dyed black hair and dark sunglasses (supposedly to combat stage fright) expressed a vulnerability atypical of male rock and roll performers at the time – it's a classic look and sound that will never go out of style.