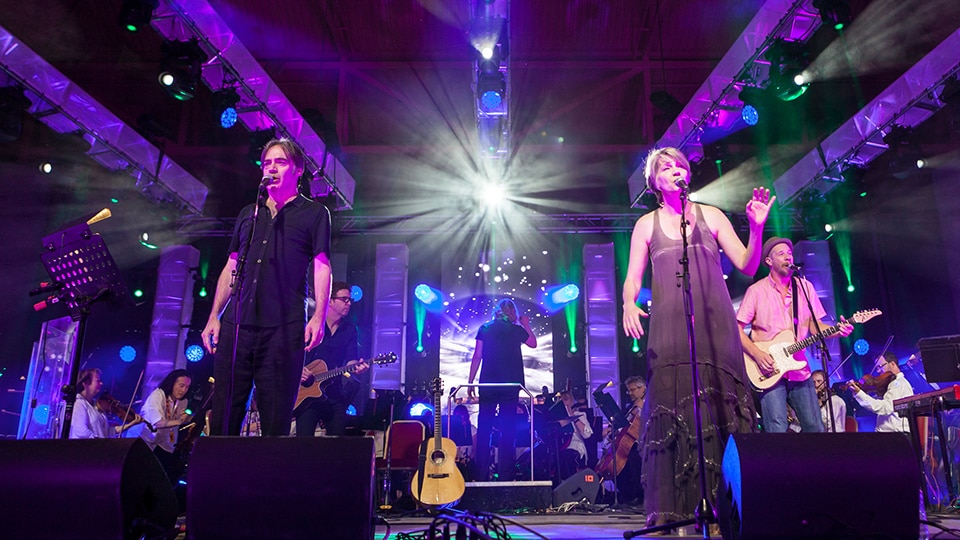 In 1993, it was hard to escape the velvet baritone of Brad Roberts, singer of Crash Test Dummies, as he related the fables of three unhappy children facing alienation in “Mmm Mmm Mmm Mmm." The band's use of ambiguous chord progressions help to reinforce the melancholy of the characters in the song, and that ambiguity is achieved through a technique called modal mixture.

Like modulation – changing key in the middle of a song – modal mixture temporarily steps into an adjacent key, tricking the ear into hearing the song in two keys at once. The key from which these borrowed chords come is often closely related to the home key; either parallel minor or one-key-signature removed. In practice, modal mixture means taking a chord that is usually major and making it minor, or vice-versa.

You can hear modal mixture in very first two chords of the song: Gm and Dm. While Gm does occur naturally in Eb Major, it doesn’t work well to establish the key; the I and V chords, or Eb and Bb, do that much better. Dm doesn’t fit at all; D should be diminished in the key of Eb major. It can, however, be the v chord of G (natural) minor. Because Dm sounds more at home with the key of G-minor than it does with Eb major, it temporarily gives the impression that the song really began in G minor. 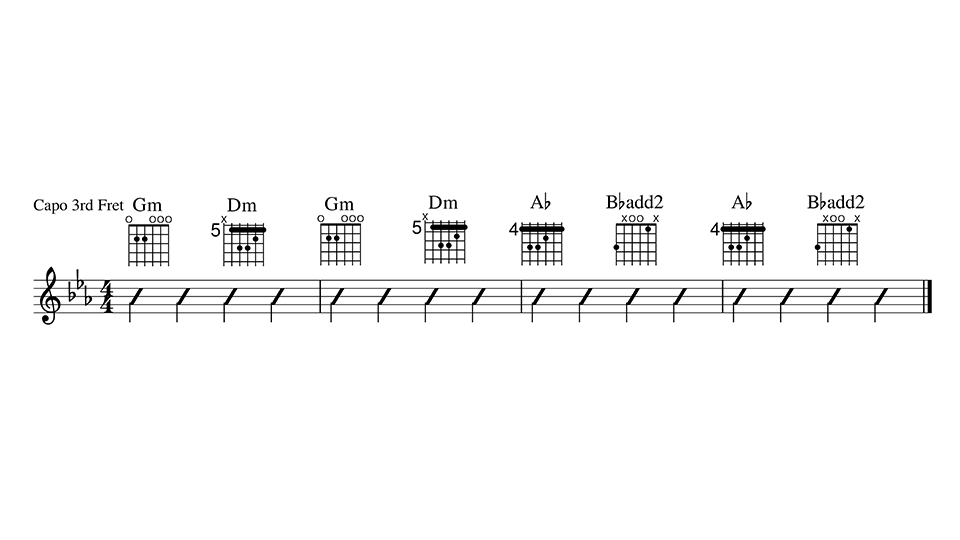 Neither of the first two chords work very well in the key of Eb major. Ab and Bb on the other hand, are very stable chords in that key.

By the end of the phrase, the chord progression clearly sounds like it’s been in Eb major all along, but the Dm chord works as momentary auditory illusion, tricking you into thinking you heard the song in a different key. Look for the identical chords in these two harmonized scales. While the chord built on D is diminished in Eb Major and minor in G minor, the Gm chord is the same in both keys. Because of this overlap, it’s only one degree of removal from the home key of Eb major to borrow the Dm chord from the key of G minor. This special kind of modal mixture using the iii chord of the home key is called a chromatic mediant relationship.

At the end of the verse comes a Cb chord, borrowed from the parallel minor key of Eb-minor. Because it’s half a step lower than the usual Cm in Eb major, it’s written as a bVI in roman numerals. Switching these chords makes the song sound like it has modulated to a minor key once again. Because it also coincides with the part of each verse where the children speak, it emphasizes their words and feelings over the narrator’s. When the chorus comes in almost immediately after that using the same Gm and Dm from the introduction, it carries the progression even further away from Eb major before it comes back home for the next verse. 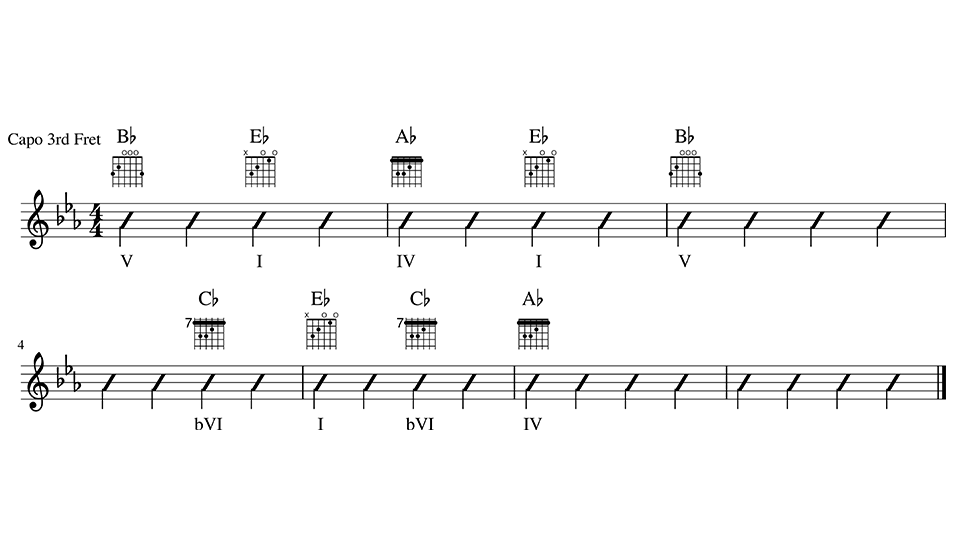 The modal mixture happens suddenly at the end of the verse, shifting the focus from the narrator to the children.

The resulting effect is a song that has two sides: a stable one in Eb major with the narrator telling the story and another where the kids speak over chords from several different minor keys. While we only listen from the point of view of the narrator, modal mixture helps to show the distance between the kids and the person telling their stories, fundamentally defining the relationship between them all.

You can try experimenting with modal mixture yourself: Take a familiar song and try switching a few chords from major to minor or vice-versa. Think about the effect it has on the song and whether it changes your interpretation of the lyrics at all. Modal mixture can be a powerful tool for deepening the meaning of a song and it's a great way to add complexity to your playing and writing.

This is just one song in the growing Rocksmith+ song library that you can learn to play. Take the next step on your musical journey.