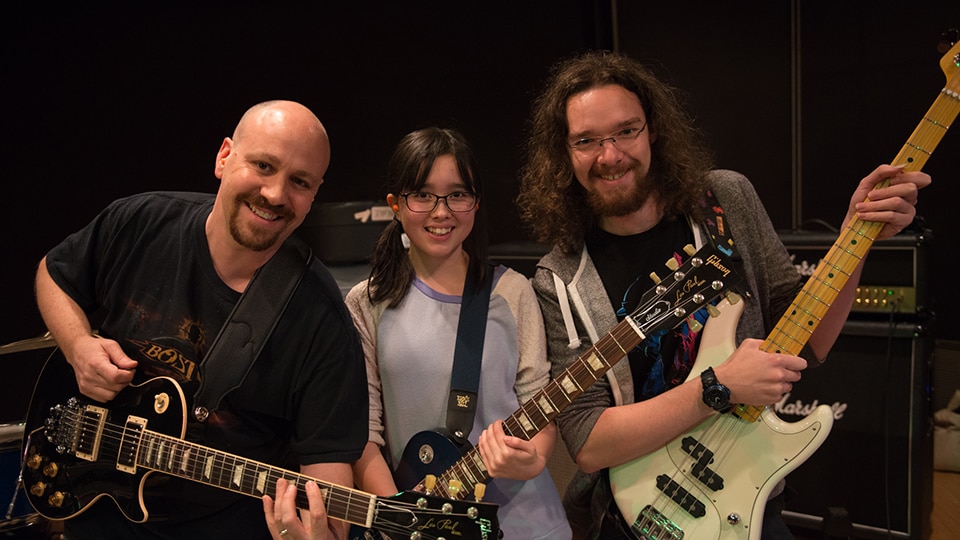 Rocksmith's 5th Anniversary Concert: Where Are They Now?

On October 20, 2016, Ubisoft celebrated Rocksmith's 5th anniversary with a free concert at the legendary Slim's in San Francisco. Three players from the Rocksmith community headlined the show, bravely playing live with a real professional backing band for the first time -- with no Real Tone Cables or HDTVs in sight. Putting just a handful of Rocksmith's star players in the spotlight became a thrilling way to prove that Rocksmith truly can make people into real-world musicians – if that's what they want to become!

Now, on the 5th anniversary of that 5th anniversary concert, it's time to catch up with those three stars and find out where music has taken them since they stepped off that fateful stage.

While still in her pre-teens, Audrey Shida became a viral sensation by playing Rocksmith on YouTube while her sister Kate played bass – and growled epic death-metal vocals. ("This is just my personal opinion," says Audrey, "but I think her shout is the best!") Still, there's a difference between playing online with a family member and playing with a full band. "I’d never played guitar with a real drummer before," she recalls, "so I was really nervous when we started the rehearsal. But as we talked to each other more, I tried to change my mind set from being nervous to being really excited and having fun on stage."

If she was nervous during the show, nobody knew – just 13 years old at the time, Audrey obliterated the room with three songs, including a scorching take on Living Colour's "Cult of Personality." And when that was done…she returned to her quiet teenage life in a small village outside Nagasaki. "We had a big party after the gig when we came home," she says. "I didn’t tell my friends about it though. We live in Japan, so I don’t think anybody recognized me from the event."

That certainly hasn't been the case online, where Audrey and Kate still stream daily while recording and releasing original material. "Last year, we released 5 albums with 235 songs," she says. "This summer, we released another album with about 50 songs on it." The duo hopes to start scoring soundtracks for games, movies, and anime before long.

Yet with all those accomplishments, the trial by fire in San Francisco remains a special moment. "If I hadn’t been on that stage that day," says Audrey, "I don't think my guitar skills would have grown as much as they have now."

Living in Ireland, Tim Porter had a love of music but never really expected to make his stage debut in San Francisco. "Being invited felt like a whole world had opened up for me," he says today. "I'd not been in a band before, and here was an opportunity to jam with a group of professional musicians! Part of me worried that it might be taken away from me, but I was overjoyed when I got to fly out."

Tim was the one musician who played both bass and guitar during his set, choosing songs by Muse, Philip Sayce, and – just to make it impossible on himself – Rush. "I worked REALLY hard on 'Subdivisions' to the dereliction of the other two songs," he admits now. "I do feel I could have played better with more practice. I really learned that if I wanted to do anything like this -- be in a band, perform music publicly -- that I had to work hard at it and be ready."

When he returned home, Tim formed Revival Mode with friends, then ultimately relocated to America, where he's now a member of Sixteen Bullets. The 5th anniversary gig did teach a few lasting lessons and created some lifelong memories. "I definitely had an absolute blast of a time," he says. "And I mostly remember the people. Everyone there had a heart of gold – their genuine excitement, enthusiasm, and support felt so vital! I still to this day want to get in contact with the drummer and apologize for making him learn a Neil Peart part."

"I remember the exact moment I received the invitation to play in the Rocksmith 5th gig," says Myles Bristowe, a suburban dad who helped organize musical charity concerts in his home state of Florida. "With three young kids running around, ours is a house bursting with sound, but for a brief moment that evening -- at precisely 7:23 pm -- there were a few seconds of silence. Just then, my phone chimed with an incoming Twitter message. I looked down at my screen and froze."

As someone who used Rocksmith to learn the 70s and 80s music that inspired him, Myles represented a lot of Rocksmith players in the community. A few months later, Myles found himself living their collective dreams at Fantasy Studios in Berkeley, California, running through songs by Def Leppard, Heart and Bon Jovi with a live band. "During our rehearsal, I was disappointed in myself because I struggled so badly with the rolling gallop in 'Barracuda,'" he remembers, "but with the band's help, it all came together nicely on stage."

The show was a big deal for Myles, but it somehow became an even bigger deal, thanks to an interview with his local newspaper. "The reporter asked me what songs I had played in the concert," recalls Myles with a grin. "I swear that I told him 'It's My Life' by Bon Jovi, but when the story hit the newsstand, the headline read, 'Local Guitarist Plays With Bon Jovi.'"

Since then, Myles has continued to play live, and hopes to return to the stage when pandemic restrictions are finally lifted, but he's had other, more personal opportunities to enjoy live music, too. "Two years ago, my son asked if he could borrow the beautiful acoustic guitar that the president of Epiphone gifted me at the Rocksmith show," Myles says. "It was a magical moment watching our son accompany himself with that guitar at his recital, and I will always be grateful to Rocksmith for bringing music into my life."

Photo of Myles, Audrey, and Tim by Katrin Auch. Used with permission.

This is just the beginning! Use the powerful practice tools, accurate note detection, and real-time feedback of Rocksmith+ to become the musician you want to be.