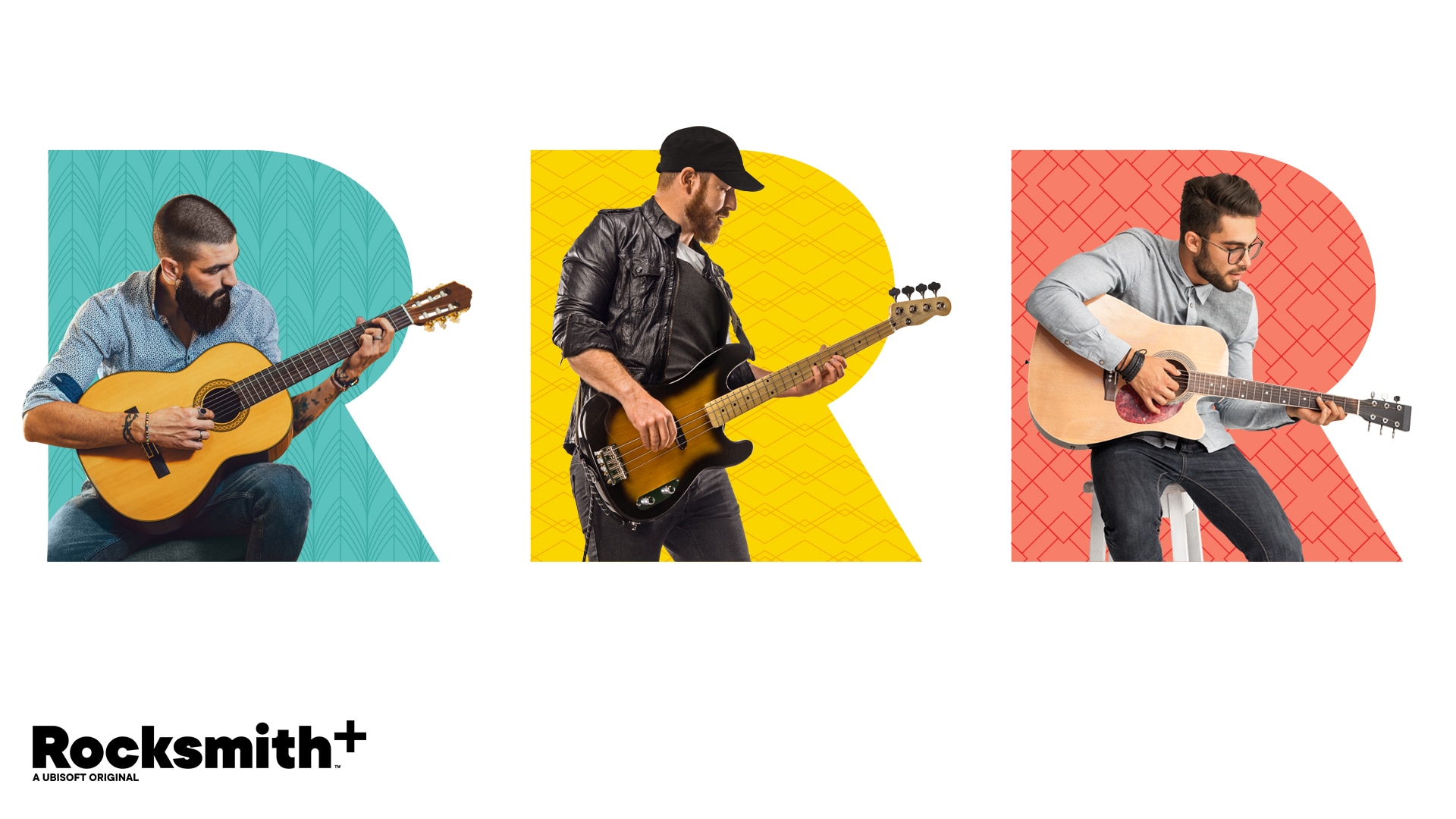 It was probably more than a decade ago when I inherited an acoustic guitar and figured I should learn how to play it. I had played piano and keyboard for a church band in my youth, so I knew the importance of chords, especially when a new song I'd never played was added to the set at the last minute. Michelle Branch was popular at the time and her songs seemed like a good place to start, and that was when I learned my first chord hand shapes: Am, C, and G. This is just one of the reflections that came back to me while developing Chord Charts and Bass Charts.

I was invited to talk about Bass Charts, but it's not much of an explanation without starting from Chord Charts. A lot of the work in making Chord Charts, such as chord identification and their timing, is thanks to machine-learning and the editing powers of our diligent Notetrackers, which you can read about in MIlo's dev diary.

Chord Charts are their own special mode; you can play with the Noteway and RS Tab notation as you would with other arrangements. But in this mode, you can also choose to display chord diagrams, which are available in two orientations: "RS Noteway" and "Traditional". In fact, "RS Noteway" is on by default when you play your first Chord Chart arrangement, so you'll see the Noteway on the top and four chord diagrams on the bottom. These diagrams shift as each chord passes the fretboard on the Noteway to show the current chord at the front. "Traditional" diagrams are oriented vertically, the way you would see chord diagrams in traditional chord books. You can set the default orientation in Settings and pick the orientation that works best for you!

In addition to chord diagrams, we also adjusted the Noteway effects and scoring rules in a way that isn't too strict, but lets you know you're playing a chord correctly. We just want you to rock out at your own pace. I'll hand things over to our resident music expert and game designer, Jarred McAdams to explain further.

When we name a chord in a Chord Chart, we’re specifying a root note and a particular set of other pitches that go along with it. For example, if I have a CMaj7 chord, the “C” tells me what the root note is, and the “Maj7” tells me that I add the major 3rd, perfect 5th, and major 7th above the root (in this case, the notes E, G, and B) to form the full chord. But the order of those notes doesn’t matter. Exactly how the notes are arranged doesn’t change the name of the chord. You can double a note, shift notes up or down an octave, and even leave out notes in some cases (usually the 5th of the chord) and the chord is still a CMaj7.

When you rearrange the notes of a chord to get different variations like this, the different arrangements are known as “voicings.” When a different note is played as the lowest note of the chord, this is specified using a slash—so if our CMaj7 chord had the E on the bottom, it might be called a CMaj7/E (read as “C major seven over E”). When different notes from the chord are placed on the bottom in this way, we refer to result as an “inversion” of the original chord.

With Chord Charts, you have the freedom to play any voicing or inversion of the named chord that you would like. The noteway will offer one standard voicing that you can use, but you’re free to play any version of that chord you know, moving notes up or down an octave, shifting the whole thing up or down to a different position, doubling notes, and so on. You can even cycle through different voicings of the chord in order to give your performance a more melodic quality. Or you can just stick with what’s shown in the noteway – it’s entirely up to you.

So, no matter how you decide to play the chord that's shown, Rocksmith+ will pulse to let you know you played all the tones in the chord correctly. The chord streak will count each successive chord played, and resets when a chord is missed. This, like with our other arrangements, is possible with the help of note detection, which you can read about in Brian Poedy's dev diary.

That's all fine and good for guitar players and chord charts, but based on feedback from the Beta we knew that bass players were not getting enough love. So we set out to try using Chord Chart data to generate charts for bass. With bass, things get a little more complicated. We had to shift our thinking because of the way bass is traditionally played: not as chords, but as chord tones. 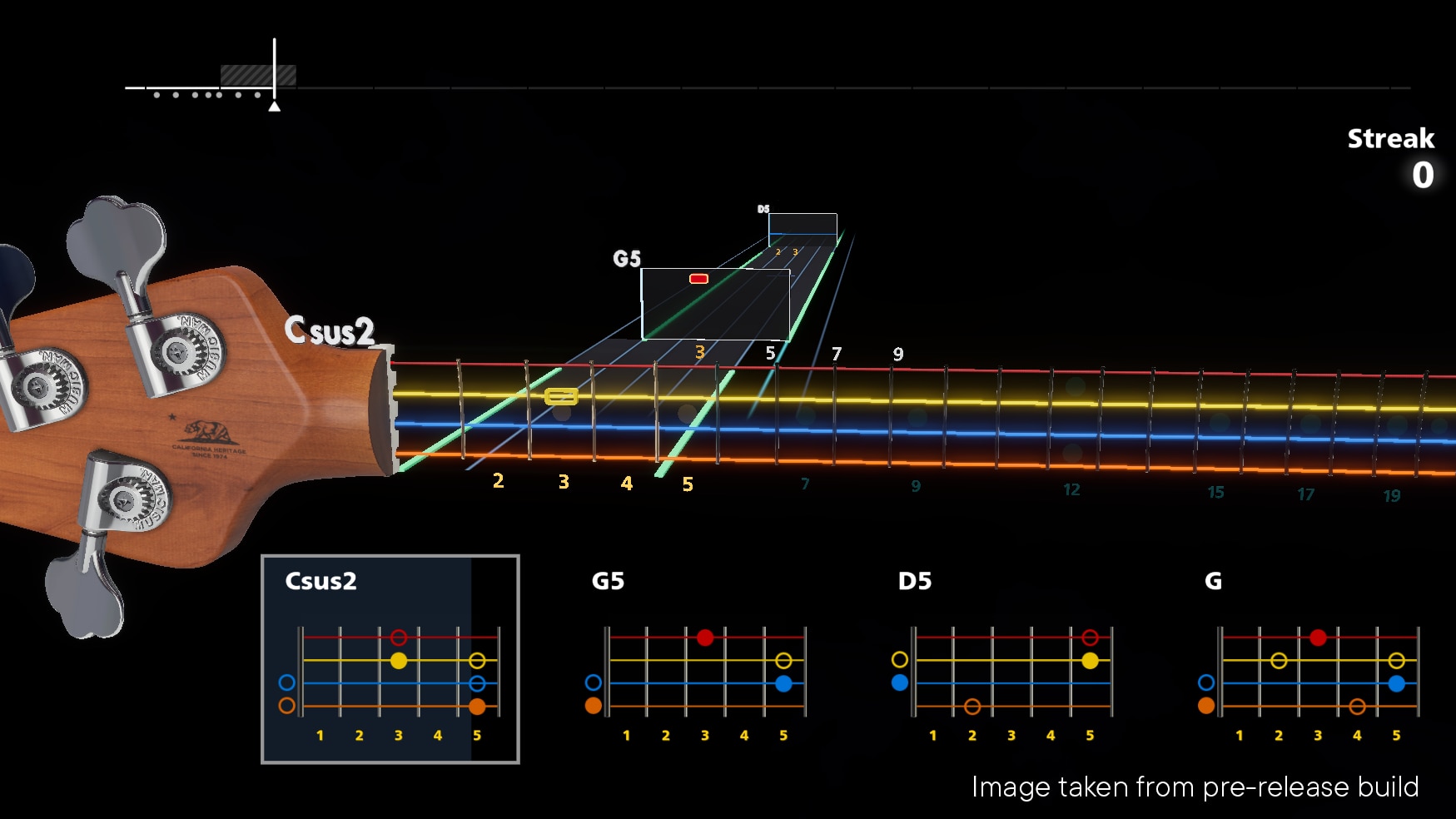 A look at the new bass chord charts… 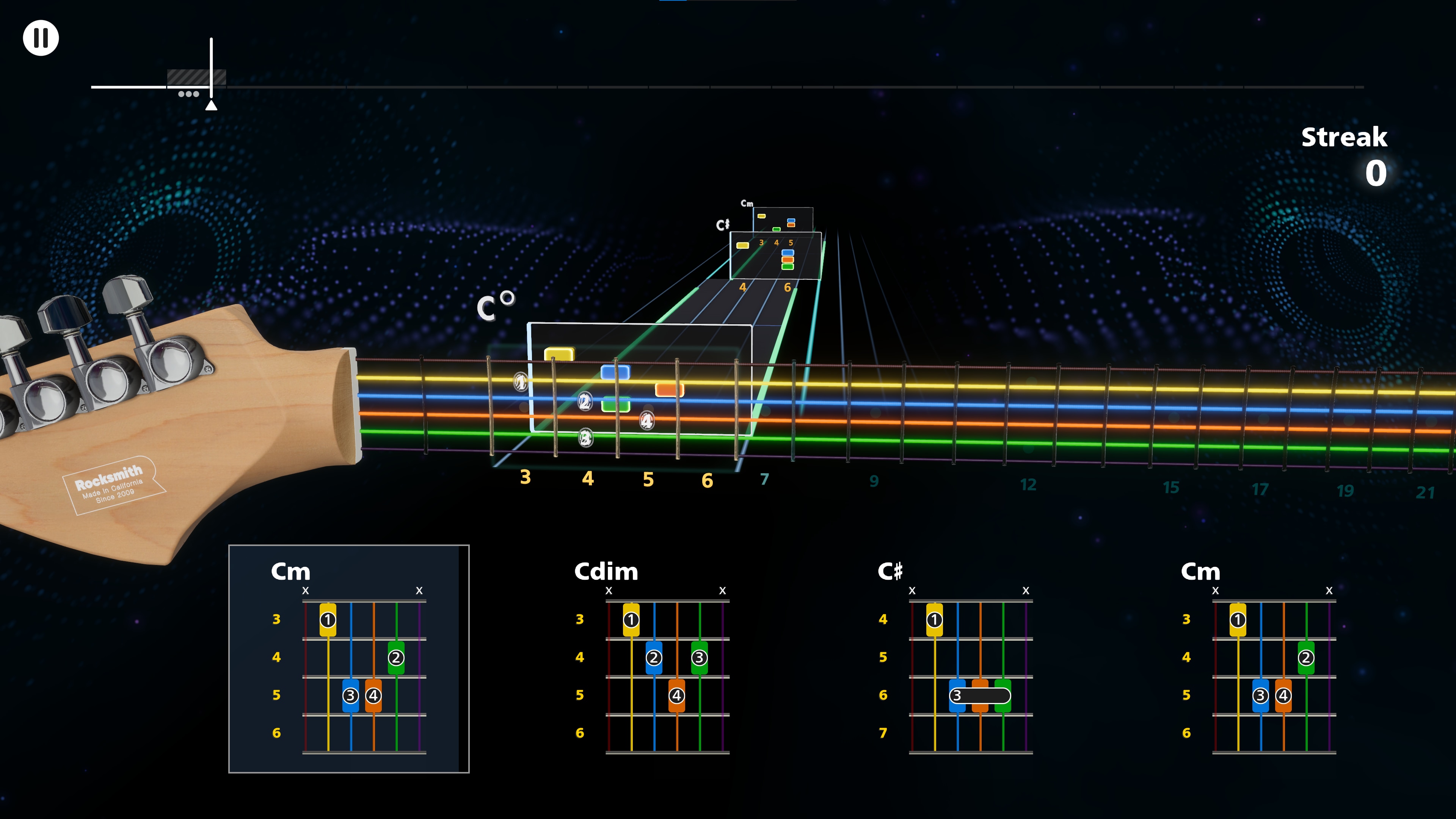 …and the 6-string chord charts that inspired it.

When talk began about building a bass version of chord charts, we knew we couldn’t just recycle the system we had built for guitar—strumming chords on bass like you do on guitar would not provide the musical experience our bass-playing friends were looking for.

So, we thought through our options... We considered only displaying the root note, but that could quickly become tedious for intermediate and advanced players. We thought about showing just the chord symbol—the way you might see it in a lead sheet—and letting users improvise freely, but we realized that would require players to know which notes to play over each chord. That’s not something we could count on everybody knowing right off the bat.

Ultimately, we took a hybrid approach. In the Noteway, we would show the root note and the name of the chord. That way, beginners could stick with those roots while advanced players might improvise freely over the chord changes.

For players in-between who want more than the root notes but could still use a little guidance, we added arpeggio diagrams in place of the chord diagrams. Here we can show not just the root note, but all the tones in the active chord found through the fifth fret. Players will have the choice to stick to the roots, venture out to other chord tones, or even throw in a few passing tones, neighbor tones, and enclosures along the way if they’re feeling adventurous.

The main differences between Bass Charts and Chord Charts are what the Noteway and the diagrams show and how the streak is counted. For bass, Chord Chart data decides the root note on the Noteway and generates real-time roots and chord tones. These are fixed across 5 frets on a chord tone diagram. Each correctly played chord tone during a chord zone increases the streak count—when nothing is played, the streak is reset. One thing we found was that our amazing note detection system was able to pick up fundamental and harmonic notes, which made evaluating notes during bass charts too lenient, so we tightened it up to evaluate the loudest detected note. Bass Charts is a highly improvisational experience, which makes it difficult to systematically assess, so playing chord tones correctly is not counted in your Skill Progress.

Thank you to everyone who contributed to building this mode. It wasn’t simple to develop this new feature, but with the team’s hard work we’re excited for players to be able to play Bass Charts for themselves.

Cat Dinh became interested in playing the guitar after they and their roommate were going through a Rachael Leigh Cook phase and saw Josie and the Pussycats, learning their first chords and party trick riffs on an inherited 3/4 acoustic guitar. They regret not paying more attention to music theory when learning piano as a child, but was happy to learn more about it during the development of Rocksmith+. Tears for Fears may be happy to know that Cat will never be bored of listening to “Everybody Wants to Rule the World” on repeat for hours.

Cat has contributed to game development for more than a decade, with credits in programming and production. This is their first project as game designer and working with a development team in Japan since moving there in 2013.

Jarred McAdams is a game designer, musician, gamer, husband, and father based in Oakland, CA. He holds a master’s degree in music composition, and worked in video, theater, and dance before entering the game industry in 2008. He contributed to a number of successful music game franchises and has been part of the Rocksmith team since 2011.