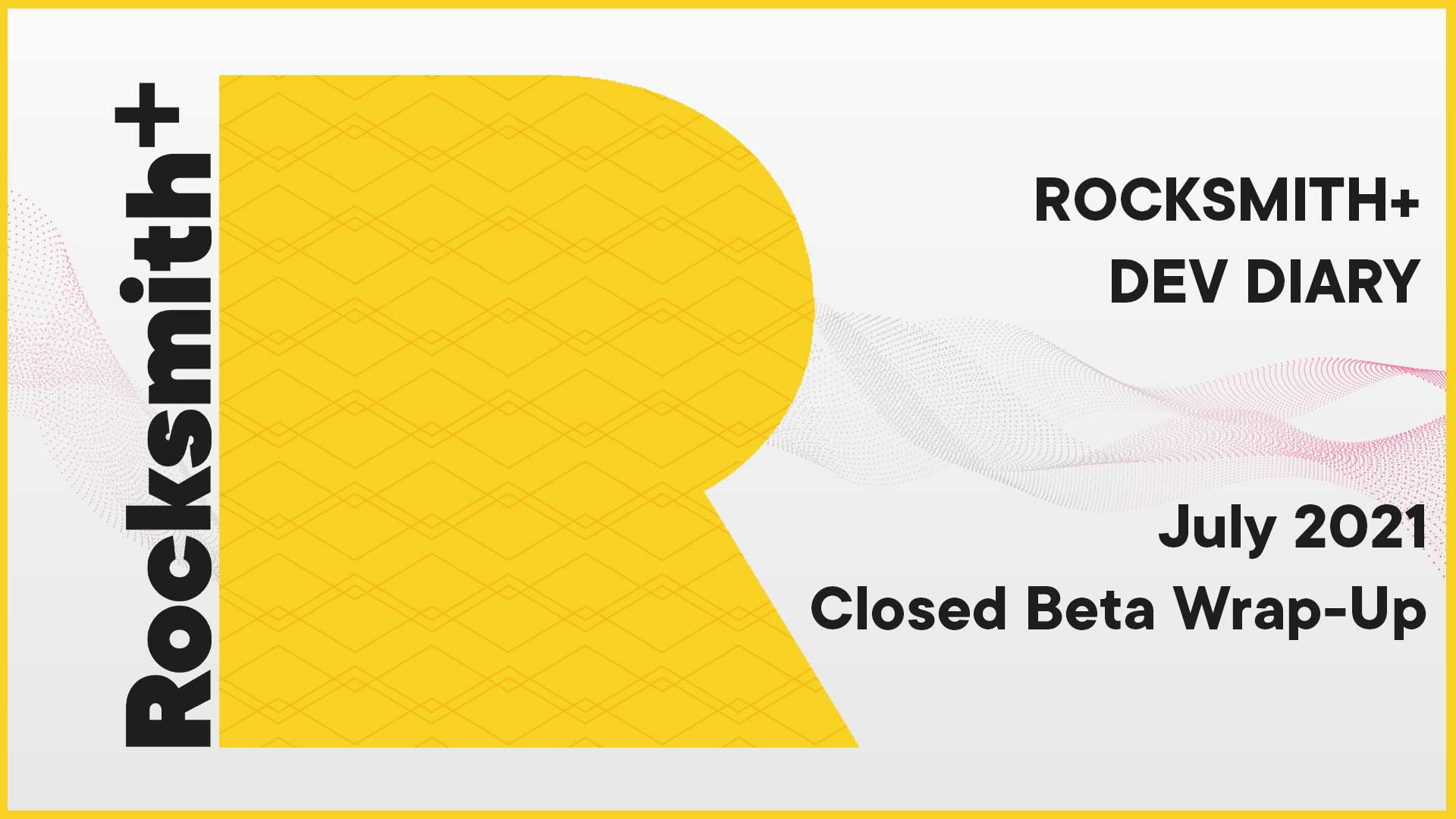 With the conclusion of the Rocksmith+ closed beta on July 23rd, the team wants to sincerely thank all our beta players for your enthusiasm, suggestions, and feedback. We’ve been digging through our official beta forums, the Rocksmith subreddit, Discord, YouTube, and the depths of social media for all your constructive criticism and bug reports (and yes, we saw the memes too). All beta participants should also have received a closing survey this week so please check your inboxes for that. We’re so fortunate to have a passionate, music-loving community, and it’s with your input that we’ll be able to make Rocksmith+ the best it can be.

There are many things about the beta that we were excited to see go smoothly. We’re happy to report that our server load tests over the course of the closed beta went very well, and we didn’t experience any server outages during the full 40 days of the closed beta. With an online service like Rocksmith+, our top priority is ensuring that our servers remain in tip-top shape. In addition, we were able to start testing our song pipeline and were able to add 373 new songs over the course of the beta. It’s the kind of cadence and release structure we'll continue to build on and grow once we go live. And we also got a lot of great data to further refine our AI algorithms for chord chart creation and recommendations thanks to all our enthusiastic players.

Because we consider our community to be our partners in development, based on what we heard from you, we’d like to share our initial priorities leading up to the Rocksmith+ PC launch and its following months. This isn’t an exhaustive list until we can read through all the survey results and report back to you, but we want to be transparent with our immediate priorities. If we’re not immediately addressing your specific feedback, it doesn’t mean we won’t get to it in the future. While we’re going to go offline for a bit to focus on addressing your input, you can expect additional dev diary posts leading up to launch where we’ll explain upcoming feature roadmaps and of course finally talk more about the music library.

Your voice matters and we’re listening!

So what about the music library? What we’re hearing from you: the diversity is appreciated, and you want more guitar-centric music, more songs, more bass arrangements, more big name acts, more music from different eras, more everything! What we can reveal now is that the library in the free closed beta test constituted a small sample of the songs that will be available at launch. At the PC launch we’re targeting 10 times the song library size from the beta, and then will continue to grow from there.

Carryover from the Rocksmith 2014 DLC library was a recurring question from many of you. Rocksmith+ uses brand new licensing deals. We have to re-negotiate deals for all our music. With the subscription service model, we’re now licensing music at the scale of entire music catalogs. We’ll release more and more songs from Rocksmith 2014 as we keep striking new deals, but in the interest of transparency: we won’t have a majority of the Rocksmith 2014 songs at first. Like you, we of course want to see those songs in Rocksmith+ as soon as possible.

As we integrate more license holders, expect to see more variety within each artist’s discographies, from top hits to the deep cuts. The new licensing paradigm means you can expect to find more international music and genres that were underrepresented in past Rocksmith games. Of course, we’ll offer more of the guitar-centric bands and genres you love as well, with previously underserved genres from Swedish death metal to country to Latin rock finally getting their time to shine. We hope that you’ll find the songs you already love and that over time you’ll discover new favorites.

Speaking of discovery, we need to do a better job of helping you explore the music library. One of the objectives we met with this closed beta was to train our recommendation algorithms so our queues could better represent your personal tastes. However, it’s clear we need to improve our search tools, filters, browsing, and ease of navigation. The team is hard at work on search and UI improvements, so you can expect better tools at your disposal when we launch, with filters for genres and easier ways to sort and scan the library as a whole, with fewer steps to get to the songs you want to play. We’ll keep adding regular quality of life updates to search and content interconnectivity as we’re live, so please keep up the excellent feedback. When we launch, we’ll be able to publish the available library on our website so you can see what’s available. Considering the scale of the upcoming Rocksmith+ song list, we’ll continue to add more ways to better understand what is available in the catalogue.

Once you’ve found the song you want to play, we need our note detection to be best in class. It’s the essence of our gameplay. Most beta players love the new tuner, tones, and improved audio engine, but we’re hearing mixed reactions on detection in the noteway, particularly around vibrato, tremolo, sustains, chord forgiveness, and bass frequencies. From a purely audio-technical standpoint, the detection in Rocksmith+ is leaps and bounds better than Rocksmith 2014 – we tested it against professional strobe tuners and found it performed with the same level of accuracy. But what we wanted to evaluate in the beta was the sense of “feel” -- the more squishy and subjective design elements to detection. For some of the techniques we listed, we simply had bugs to fix, but we also needed your input so we could balance the strictness and timing windows of the detection, to find that right chemistry between accuracy and playability. It’s great to play perfectly, but playing too perfectly can sometimes feel robotic, which loses some of the nuance, humanity, and charm of the best music performances. Thanks to your help, we’re confident we’ll be able to secure that balance.

Another key of our core song gameplay is the note highway itself. We take accessibility very seriously, and we saw that while our more robust suite of color palette options was appreciated, there were still some users who had trouble differentiating colors on the noteway. We’re devoting time to improve our color balancing (particularly around the mix of different blues) and offering additional color customization options, including some that allow for Rocksmith 2014 colors. We want as many people as possible to feel welcome when playing Rocksmith+.

Many of you noted Rocksmith+’s greater focus on music education, with tools like tablature, note-by-note, and MIDI playback to help practice, and interactive mini-exercises to test individual techniques and chords in a song. To keep improving the educational side, we’d like to communicate objectives more clearly through our mastery target system and clarify how your performance in songs impacts our skill-based recommendations. Over the course of the beta, we uncovered bugs and UI/UX issues in these systems that we’re now working to address for launch. Our new “My Skill” page will better represent your levels on your instrument and where you can improve your skillset next. We’re also fixing a bug that caused mastery between guitar and bass to overlap, leading to mismatched difficulty when players switched instruments. And we’re happy to share that we’re bringing back the ability to default the song mastery to the maximum while optionally turning off Adaptive Difficulty. With Rocksmith+, we want you to understand your growth as a musician and to feel empowered to customize the speed of that learning. If you prefer to play the song with all notes present from the start, we’ll make that easier for you.

Another element for us to address is what most people imagine when they think of beta testing: fixing bugs. With your feedback, we were able to uncover and address all kinds of crashes, login problems, connectivity and input issues, audio problems, load time improvements: we’re prioritizing the most severe and oft-encountered bugs now and we’ll be addressing them leading to launch. A special thanks to everyone who was able to test our new input methods; we’re working to improve the experience of people using as many different interfaces as possible.

Many of you had some great feature requests, both for returning features from past Rocksmith games and new suggestions. One thing to understand is that we’ve built Rocksmith+ on brand new and powerful tech: our proprietary Snowdrop engine, developed by Ubisoft Massive. With the Snowdrop engine, we’ll be able to work quickly, iteratively, and confident in the fact that we’re futureproofed with top-notch internal core engineering support for years to come. While Rocksmith 2014 only had a couple feature updates, with Rocksmith+ we’ll release new features and feature improvements all the time (alongside the ongoing releases of a massive amount of music, new lessons, reward unlocks, and Rocksmith Discover content). We can truly react to your input. The downside to upgrading to a powerful new engine is a lot of past features had to be rebuilt from the ground up. The core of Rocksmith has always been playing songs – so that was our focus to start. From there, we’ll make our feature set more and more robust to cater to all kinds of player needs. We’ll come back with a live release roadmap with more specifics closer to our PC launch so you can see what to expect.

Thank you again for participating in the closed beta – your feedback is a critical component to Rocksmith's evolution. Be sure to follow Rocksmith+ on our social media channels and participate in the post-beta survey. We value your voice: it has informed updates we already made during the closed beta and will continue to help us shape the future of Rocksmith together.

Arthur von Nagel is the lead producer on Rockmith+ and has been working on the Rocksmith brand for half a decade. Before joining Ubisoft, he served as a voiceover director, composer, designer, producer, and localization specialist for many videogames. Arthur was the vocalist and bassist for San Francisco Bay Area progressive black/death metal band Cormorant, touring nationally and releasing three albums.