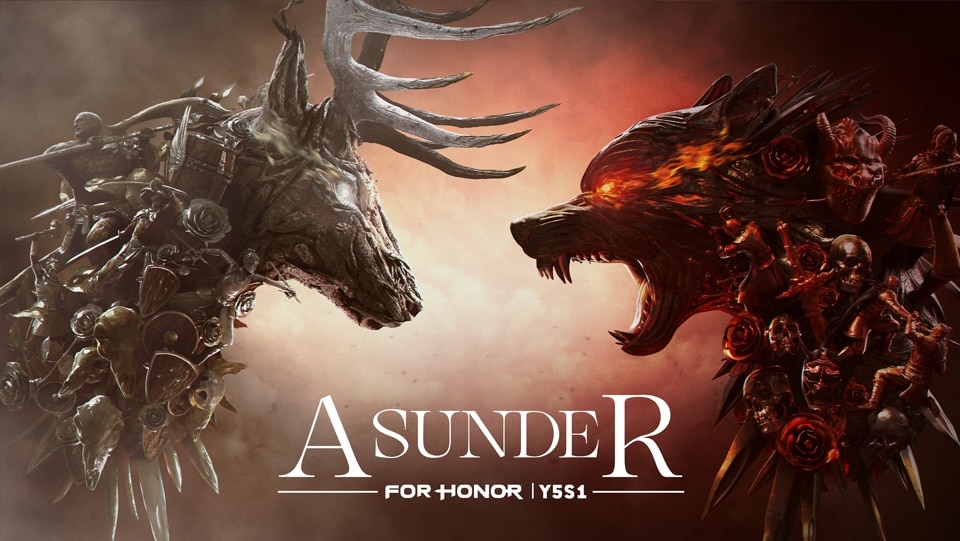 For Honor’s 5th year is finally here with Y5S1: Asunder! All celebrate their chosen covenants and continue their march to battle. Starting March 11th, experience how Heathmoor is now torn asunder between the Order of Horkos and the Chimera Alliance. Get access to new armor variations, weapons, events, battle pass and more!

For more insight into Y5S1, you can hear what the dev team has to say by checking our on Warrior’s Den.

Those determined to honor Apollyon's legacy, and to create a new order ruled by the most deserving warriors of Heathmoor, often pledged their alliance to Horkos. Among the various initiation rites that would allow someone to join the Order, the Masquerade would pit a promising challenger against other warriors in a deadly battle. Only the survivors would be accepted in the Order. It was a way to keep the strongest in their rightful place, while bringing new recruits in the Horkos.

From season launch to April 1st, you are invited to the Horkos Masquerade. Will you be strong enough to survive and stay? Participate in a special Horkos themed game mode, Carousel of Horkos, and earn exclusive Weapons.

Carousel of Horkos is a 4v4 PVP game mode. Two teams compete until all the members of the same team are defeated at the same time. It's a Single Pick match with no Revive, no Feats and no Gear Perks. To add to the chaos, there is a buffed up Neutral Bot known as “The Horkos Challenger”, that will attempt to defeat you. Quick tip, if you succeed in killing the NPC, you steal its modifier.

During the event, all warriors will have access to the free Event Pass which allows them to earn a multitude of rewards such as a new Battle Outfit, a Mood Effect, as well as an Ornament. You can also expect 28 new event specific weapons to loot from now until April 1st.

In Y5S1 Paired Emotes are coming to For Honor! Celebrate gruesome executions, epic ledges, savage ganks, or simply express yourself along with your warrior friends. For Honor's first Paired Emote, Chest Bump, will be available through Y5S1's Battle Pass.

Based on your feedback from our previous Testing Grounds, updates to Warden's gameplay take effect at season start. For more information regarding Warden’s Changes, and future testing grounds, check out our Fight Update article.

While some makers chose to serve the Horkos, others followed Ilma's lead and joined the Chimera. These skilled artisans benefitted from the newest technological advances and shared resources to improve the warriors' gear.

In Y5S1, For Honor continues to bring new seasonal customization. Throughout the season, look out for new armor variations, weapons, and more!

With more resources at their disposal, the makers of Horkos were able to craft some of the most refined weapons and draperies one could find in Heathmoor. A scribe who attended one of the Masquerades described the style of the Horkos warriors as 'sophisticated yet violent, gorgeous yet terrifying'. If one took a closer look at the bright colors and smiling masks of Horkos, they would discern a disturbing truth beneath the lavish surface.

This season, play through the Battle Pass, and add some Horkos flair to your character's look through the 100 Tiers of rewards available for all heroes! Remember, exclusively included in this season’s Battle Pass is For Honor’s first ever paired emote Chest Bump.

Starting Y5S1, changes are coming to the rewards warriors will receive at the conclusion of seasonal faction wars. These changes are detailed below.

For more insight into Y5S1, and what is to come, you can hear what the dev team has to say by checking our on Warrior’s Den.