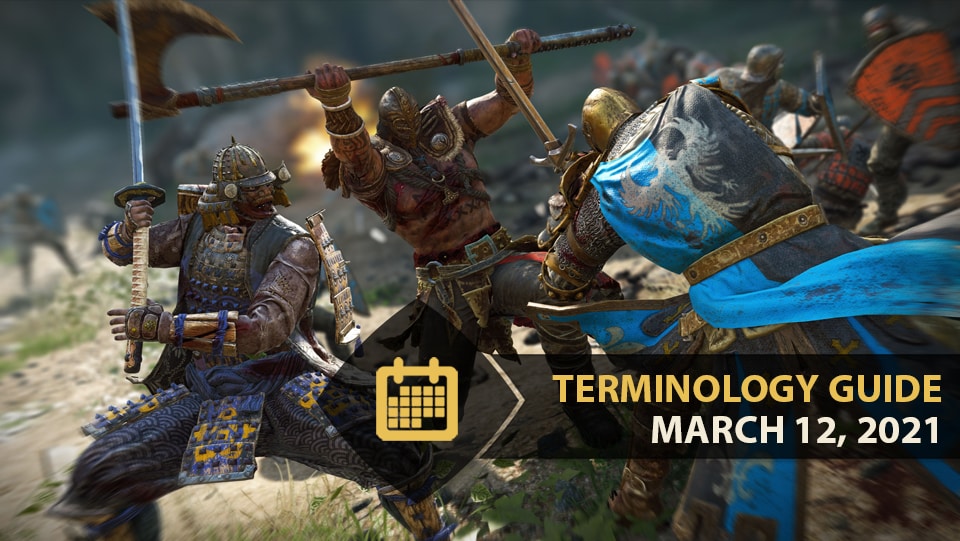 Welcome new and returning Warriors! The For Honor community uses a lot of complex terminology when discussing this game. This can be frustrating to newer or more relaxed players who are just trying to understand their own hero.

We created this guide for players who don’t understand their losses, or feel that they may be missing crucial knowledge.

Practice always helps, but game knowledge can go a long way when asking “How do I stop light spammers?” or “how do I deal with bashes?”

Whether you’re new or just someone who wants to brush up on their terminology, we hope you find this useful.

Bashes are moves that cannot be blocked or parried. They are often used to open up opponents. Bashes typically use part of the body or armor rather than a weapon. Warden’s Shoulder Bash is a well-known example of this type of move.

Counter-play: Dodging is the main defense against bashes. Heroes that have a dodge attack can deal with bashes quite well.

Another counter is reading when a player is likely to use a bash – catch them early enough, and you can use an attack to interrupt the bash before it even gets started.

Counter-play: Attacks with uninterruptible stance can still be defended against with parries and dodges, though sometimes these attacks have other special properties (such as the Unblockable property). They also may have variable timing, which can throw off your dodge and parry attempts.

Be aware that deflects are not always a good option against Uninterruptible attacks. Typically, heroes with deflects have less health, so the damage trade-off may not be worth it.

Enhanced attacks are attacks that can be used in a combo after a prior attack has been blocked. Most attacks can’t go further into a combo after a block, as it puts the blocked hero into recovery.

Warlord is a hero whose light attacks are enhanced.

Counter-play: Enhanced attacks should be kept in mind so you’re not caught unawares after a successful block.

Unblockable attacks are marked by a red trail on the weapon, in addition to a specific symbol that will appear.

As you may suspect, Unblockable attacks cannot be blocked. Dodging and parrying are still options.

Counter-play: Unblockable attacks force you to take some sort of action. Either dodge, parry, or interrupt the attack before it even begins. Use the Training Mode to practice defending against specific moves using pre-set AI attacks.

Undodgeable attacks are marked by a blue trail.

Counter-play: Undodgeable attacks are an effective way of catching dodge attack-focused heroes. If you’re playing Tiandi or Zhanhu, be more careful in your use of that part of your moveset.

There are two types of feint: hard feints and soft feints. Hard feints are used to cancel heavy attacks. “Soft” feints are moves that don’t require the use of the “Feint” input to be changed. Kensei, for example, has a few different soft feints from their top heavy finisher. By pressing the light attack button and a direction, they can adjust to a side light attack.

Punishes are the optimal attack to use in certain situations. It’s important to note that every hero has different punishes, but as a general rule you can use more damaging attacks if you manage to parry a light attack. Heavy attacks may only be punished by a light or a Zone.

Some heroes have dedicated punishes. If Nuxia parries an attack, she can use her dedicated parry punish move.

If she parries a light attack, she can use her heavy attack to punish her opponent for more damage. But she technically does have a dedicated parry punish that she can choose to use.

Game Score is how you push the enemy team into “Breaking.” When a team reaches 1000 points, their opponent is pushed into Breaking. When a team is breaking, it can’t respawn.

One crucial part of Game Score is the distinction between hard points and soft points. Some actions give your team points that never go away (i.e. killing heroes and minions). But when you capture a Zone, your team receives 100 soft points, which contribute to your team’s Game Score until the other team capture the Zone back.

This is important to know when in Breaking, because it means that capturing an enemy-controlled Zone may both release your team from Breaking, and possibly put the other team into Breaking.

Revenge is a meter that builds as an isolated player is attacked by multiple opponents.

Note that Revenge can be “held.” If you attack an opponent holding onto their Revenge, they can knock down any attackers who attack them.

Tip: Revenge is sometimes best used as a method of stalling, or waiting for help. You can try to win in an outnumbered situation, but carefully delaying until a friend arrives is also an option.

Guardbreaks are a method of opening up an opponent. However, a GB’d player always gets the opportunity to counter guardbreak.

Tip: Guardbreaks are useful for “catching” heroes who are dodging or rolling. Feinting a heavy and then guardbreaking is a useful trick for catching a defensive player.

Stamina is shown by the green bar underneath your health. When taking certain actions or being attacked by specific moves, heroes gradually lose their Stamina.

Some heroes, like Jiang Jun, are able to recover Stamina in a unique way. For all heroes, simply waiting for stamina recovery may make more sense than risking going Out of Stamina.

The Out of Stamina state, or OOS, is a painful situation to be in. Your attacks will come out much slower, and any throws will cause you to be “knocked down.” Knocked down opponents are vulnerable to very high damage punishes, so be careful! Play defensively when OOS around enemy heroes, or you’ll likely pay the cost.

As a general note: Zone attacks often cost a great deal of Stamina.

Dodging is a form of defense that avoids the attack entirely if timed correctly. Some heroes have dodge attacks, which means their defense can lead to effective offense.

It can sometimes feel impossible to hit these heroes, but remember that well-timed Guardbreaks will catch dodges and rolls. If someone is dodging a lot, you may be able to predict it. Feinting a heavy attack to force a dodge then immediately feinting into a guardbreak is one possible strategy.

A form of defense that often leads to very high damage. If your hero has a deflect, you may want to look out for attacks from the top of your guard indicator. Player typically find these easier to deflect.

It’s worth noting that “chasing Deflects” can get you into trouble. Sometimes a simple block is a much safer option. Also: you likely don’t want to deflect against an opponent using lots of Uninterruptible attacks.

But Deflects are very cool, so we understand if you want to keep attempting lots of them.

Ganking is attacking someone when you outnumber them. Anti-gank play is what happens when you’re outnumbered.

Most players do not like being ganked. It’s not an easy situation to deal with. In modes that feature lots of players, uneven situations will always occur around the battlefield.

But if you’re trying to win a Dominion match, understanding how to gank and how to react to being ganked is crucial. Outnumbered heroes gain Revenge, which lets them continue to fight. Avoid feeding Revenge unnecessarily and remember to stay a bit more defensive when outnumbered. It’s okay to play conservatively until helps arrives!