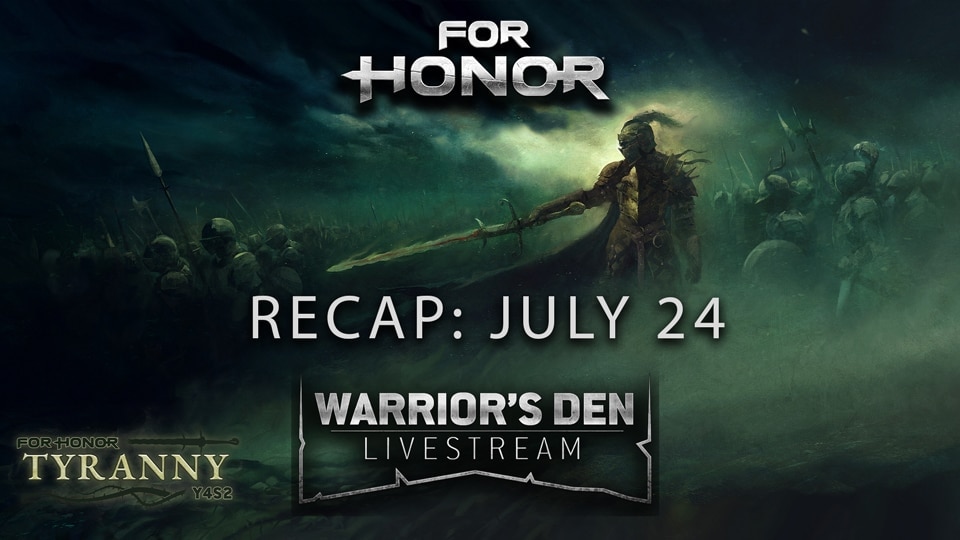 There are major tidings in the world of For Honor. The full Warrior’s Den is here:

The new hero, Warmonger, is dropping August 6th. And indeed, the live Tyrant’s Test game mode already showcases the Warmonger if you were interested in previewing their playstyle by battling against it.

We are also releasing the Core Combat Update on August 6th, which will include important changes to improve consistency and enhance offense, while also creating new ways to counter light spam’s effectiveness.

As a reminder, For Honor is having a free weekend starting July 23rd! From now until the 26th (or 27th depending on your region), all new players will have the chance to try heroes from the Knights, Wu Lin, Vikings, and Samurai factions, and have access to multiple game modes.

Whether you have a friend to help you resist the incursion of the Warmongers, or a potential comrade-in-arms that is interested in being a Warmonger main themselves come August 6th, remember to invite your friends to try the game!

For Honor will be discounted up to 80% off, and any progress made will carry over to the full version of the game should you (or a friend) purchase it.

Check the graphic below to find when the free weekend begins in your area. Good luck, and we’ll see you on the battlefield!

Rise of the Warmongers

Peace is no more. The Metal Trials have been overrun by dark forces meant to bring about a reign of tyranny unlike this world has ever seen before. Take them on in this special event mode: Rise of the Warmongers.

This week’s event playlist is a game mode that gets harder the more you succeed. Are you strong enough to reach the end? You’ll have until August 6th to do so!

Event orders are in! Be part of the faction that gets the most executions by August 6th to claim your reward!

The Weekly Quest is live for owners of the Marching Fire DLC. You have until August 6th to complete it!

Stay safe, and we’ll see you again at the next Warrior’s Den (from home)!