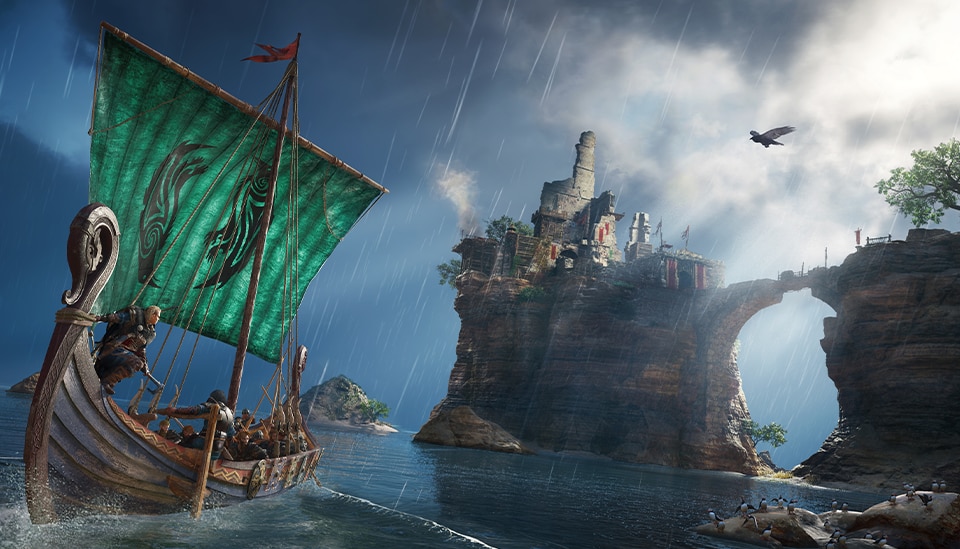 Whether you’re raiding enemy camps, exploring the wilderness, or building your settlement, there’s a lot to see and do in Assassin’s Creed Valhalla. To make sure you don’t miss some of the helpful details tucked away in the game, here are 14 things you might not know about!

Use the Hidden Blade in Combat

While it’s satisfying to dual wield or carry a weapon and a shield, leaving your left-hand empty will allow you the unique ability to use the Hidden Blade in combat. Tapping the block button as an enemy swings will parry their attack, and holding it down will cause Eivor to viciously stab them in the gut. Those wanting to earn extra-tough Viking points can even go completely empty-handed and fight enemies with their Hidden Blade and bare fists, especially if they’re looking to take a non-lethal approach to certain encounters. Enemies defeated with bare fists do not die but, rather, are merely rendered unconscious.

Rely on Drunk NPCs for Cover

Sneaking around in a busy town can be challenging, but the game offers you several ways to leverage the environment to keep you safe and undetected. One of the most entertaining is using drunk NPCs to mask your movement and keep you hidden. When entering a Distrust Zone, use your Eagle Vision and identify characters who are receptive to offers of alcohol. Approach them and offer them a drink. Then, walk with them as you head toward your objective. Eventually, you’ll have to confess you don’t have any alcohol on hand, which will cause them to become upset. Their outburst will attract the guards’ attention, giving you the opening you need to slip away without being seen.

Torches Can be Used in Combat

If you find yourself being overwhelmed in combat, try throwing torches at enemies. The fire will inflict burning damage and gnaw away at enemy health, while preoccupying your target and giving you an opportunity to attack without interruption.
It works best when you’re within range and can see the enemy’s health bar on screen, allowing you the clearest shot when throwing. Additionally, the torch can be used as a creative (and somewhat brutal) secondary weapon if you’re wanting to be up close and personal.

Flyting Gives You a Charisma Boost

Flyting is more than just a fun side activity available in your Settlement. The more Flyting challenges you win, the more you’ll move toward a notable charisma boost. With the boost, you will unlock new dialog options for Eivor, some of which allow you to resolve conflicts without having to engage in combat.

Zealots are formidable foes and pose a significant challenge in combat. However, Eivor doesn’t always have to face them alone. When a zealot attacks you near a raiding party, the raiders will join in the fight and help you take the enemy down. If there’s one constant in Assassin’s Creed Valhalla, it’s this: take care of your raiding party, and they’ll take care of you!

Fishing is a unique way to gain health and obtain items in Valhalla. Unlocked through building a Fishing Hut in a Tier 2 settlement, this ability allows Eivor to fish along the shore of any body of water. For best luck, however, make sure to cast a line where you can see fish jumping above the surface. And when you do make a big catch, return your catches to the Fishing Hut to exchange them for rare items and valuable upgrade reagents!

Teach Your Horses to Swim

Once you’ve built a stable in your Settlement, you’ll have the option to teach your horses how to swim. Doing so allows Eivor to travel the map much more quickly and efficiently, allowing you to explore with ease.

Vikings are known for their love of feasting and that is something you will be able to experience in Assassin’s Creed Valhalla.
Ringing the bell at the entrance of your longhouse will allow you to start a feast with the community that lives in your settlement. Feasting will boost your stats and those of your crew, making you more efficient when raiding.

Thin Out Enemy Camps with Stealth

Those looking to play a stealth-heavy game should know it’s possible to clear out the enemies in a camp without ever calling in your raiders. However, you will need their help to access certain chests and areas in camps filled with vital supplies. So put your cloak on, assassinate the guards from the shadows first, and then call in your raiders using the Viking horn (in the tool wheel) when you want to loot the cargo.

Get to Know Everyone

The Codex (formerly known as the Animus Database) is back in Assassin’s Creed Valhalla. For each new location discovered or character met throughout Eivor’s journey, you will find a dedicated article in the Codex giving you more background information. This Codex is accessible at any time from the pause menu.

There are a handful of tools available in-game to help you capture the feeling of being a Viking raider. Use the cinematic camera while sailing or riding in auto mode to give your travels a movie-like feel, leverage photo mode to document your adventures, and listen to classic Viking stories and songs while traveling with your raiders. To activate the cinematic camera, hold down the right analog stick while following a road. Click both analog sticks simultaneously to active photo mode and take a great shot to share on social media.

While running, make sure to use the ability to slide and make a quick, agile getaway from enemies. Additionally, Eivor can sprint while crouching, giving stealth players the opportunity to quickly get around while avoiding detection.
Upgrade Your Favorite Armor and Weapon Sets
While you are able to obtain new weapons and items in Assassin’s Creed Valhalla, they’re not available in the same abundance as in previous entries. Instead, it’s recommended that you focus on upgrading armor sets and weapons to make them more powerful and effective in combat. Be sure to experiment with different combinations, and when you find something that suits you, invest in upgrades to make it as strong and effective as possible.

While it’s always cool to don thick furs and heavy armor, players wanting to take a leaner approach and show off their muscles and tattoos will have the option to hide their clothes while still reaping the stat benefits of your armor.
These are just a few of the cool details tucked away in the world of Assassin’s Creed Valhalla. Be sure to experiment and report back to us on social with your favorite tips and details! And for more help, check out our collection of 5 Essential Tips, this breakdown of the skills and progression in the game, and other guides over on Gameplan.