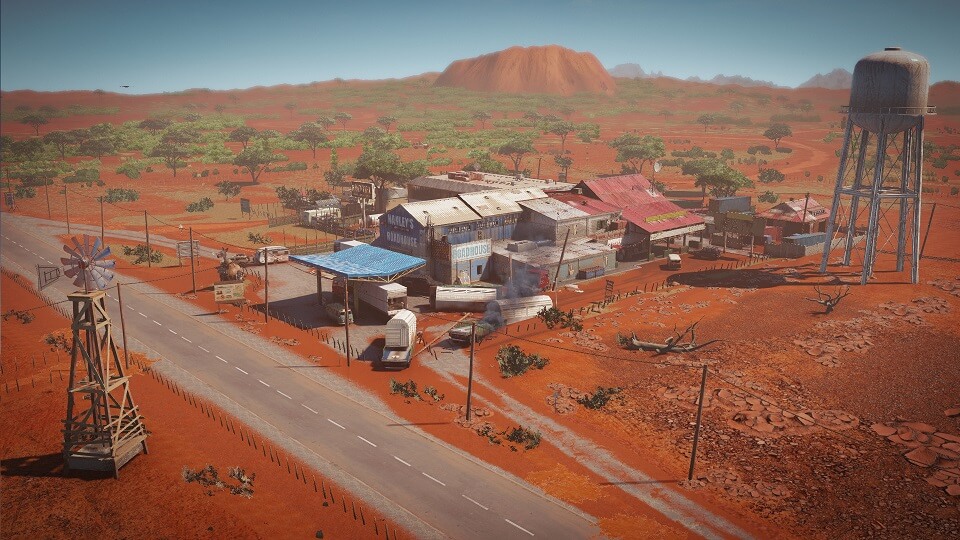 Welcome to the Outback! Set in Australia’s Red Heart, this map is an homage to all the dusty service stations and motels that populate the forgotten highways of the continent, places filled with hardworking locals and specialty menu items you’ll find nowhere else.

Unfortunately for this particular pit stop, a passing nuclear convoy came crashing to a halt while under attack, forcing locals and patrons to flee and causing Rainbow to be called in. As to what inspired the team when designing the game’s 21st map, Assistant Level Design Director Jacques Wong says they referred to two fan favourites – Oregon and Clubhouse.

“We divided the map into three distinct sections – the Garage, the Motel, and the Restaurant – and put a lot of effort into making sure each section is recognisable, even from far away,” Wong explained. “There are specific colours for each section, and we used lighting and geometry to direct the player’s gaze to where they need to go.”

Additionally, the focus was on returning to a style of gameplay that players have enjoyed in the past, while keeping the meta in mind. “We wanted to emphasise the impact of player decision-making, so for example, there’s a limited number of doors between each sections” Wong continued. “Roamers can still create new paths by destroying walls, and there’s always the option of changing floors as a flanking strategy. It’s a medium-sized map, so players won’t need to go far to find alternative routes.”

Meanwhile, the three sections are as unique inside as they are out. Get ready for rooms packed with souvenirs and cultural artifacts from many a roadside petrol station across the Great Southern Land. You might even run into our friendly resident mascot, Norman, in the restaurant, though we do ask that you try not to stare.

Outback will be launching as part of Operation Burnt Horizon, the first season of our Year 4 lineup. For more information, follow us on Facebook and Twitter or join the discussion on our subreddit and forums! Visit our Rainbow Six Twitch Channel on February 17 for the full reveal of Operation Burnt Horizon, live from the Six Invitational in Montréal.