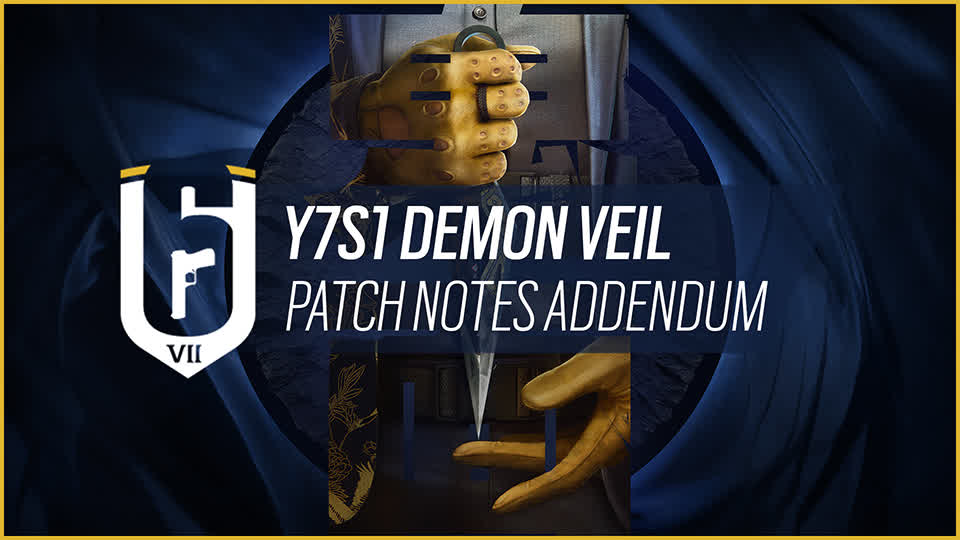 You can find here the updates and fixes made over the course of the Y7S1 Season Test Server. For the full Demon Veil Patch Notes, follow the link below.

FIXED - Camera is zoomed out while aiming down sights with the Reflex B sight equipped.

FIXED - Unable to pick up some devices that are deployed into small spaces.

FIXED - Camera goes out of bounds if watching a kill cam when the end of round replay begins.

FIXED - Windows don't break when deploying a device on a barricade.

FIXED - After spawning, crosshairs can sometimes remain visible while aiming down sights.

FIXED - Camera goes out of bounds for Attackers in support mode when the last Attacker is eliminated and there are no Observation Tools on their team.

FIXED - Crosshairs of the Reflex B sight are obstructed by the iron sights of various weapons.

FIXED - Defuser disappears if an Attacker picks up the defuser and disconnects between Attacker lock and the start of the Action Phase.

FIXED - SPAS-15 shotgun has no reticle for some non-magnifying sights.

FIXED - Azami's Kiba Barrier doesn't break when the breakable wall it's deployed on is completely destroyed.

FIXED - Valkyrie's Black Eye doesn't lose signal when thrown outside onto the bottom of 2F Upper Bridge on Kanal map.

FIXED - Azami's Kiba Barrier can allow players to get inside the shark on Outback map.

FIXED - Ace's S.E.L.M.A. Aqua Breacher has no SFX when equipped and held.

FIXED - Azami's Kiba Barrier doesn't collapse when an operator stands on it.

FIXED - Azami's Kiba Barrier deployment VFX are visible from the other side of walls.

FIXED - Azami's Kiba Barrier doesn't break when an Operator stands on it if it was deployed on a hatch that gets destroyed afterward.

FIXED - Azami's Kiba Barrier can sometimes prevent vaulting through windows when it's deployed on a ceiling.

FIXED - Bandit's Shock Wire can't be deployed on a reinforced hatch when another device is in the center of it.

FIXED - Fuze's Cluster Charge can be deployed on an angle where a reinforced and indestructible wall meet.

FIXED - Defenders lose the round and Goyo gets a Friendly Fire penalty if an Attacker moves the hostage near a Volcán Canister and disconnects after deploying a device to destroy the canister.

FIXED - IQ's Electronics Detector can detect Azami's Kiba Barrier when the kunai is the environment but undeployed.

FIXED - Bullet impact visuals appear on both of Maestro's Evil Eyes when only one is shot.

FIXED - Maverick's Breaching Torch is unable to breach a reinforced wall when an Operator's shield is pressed against the other side.

FIXED - Pulse's Cardiac Sensor can't be unequipped after a player equips it and immediately swaps to a gadget.

FIXED - Tachanka's DP27 has no reticle when aiming down some non-magnifying sights.

FIXED - Defenders lose the round and Wamai gets a Friendly Fire penalty if an Attacker moves the hostage near Wamai's MAG-Net and disconnects after deploying a device to destroy the MAG-Net.

FIXED - Ying is unable to vault while holding a Candela.

FIXED - Some unique ability previews are missing during the Preparation Phase.

FIXED - Privacy Options can be reset to default while the player is in the middle of a match.

FIXED - The Home section background is sometimes replaced by a black screen after exiting the Notifications section.

FIXED - The last Operator eliminated at the end of a match doesn't appear eliminated on the scoreboard.

FIXED - Players can join an in-progress Team Deathmatch match when there is less than 2 minutes left in the round or when 3/4 of the total eliminations has been reached.

FIXED - Long delay between the end of a Custom Local Team Deathmatch match and when the MVP starts.

FIXED - Player usernames aren't display during the MVP of a Team Deathmatch match.

FIXED - Crash occurs when multiple players repeatedly switch Operators while the lobby is paused by the host.

FIXED - Player isn't returned to the Watch section at the end of a match replay.

FIXED - Match Replay experiences long loading times when transitioning between rounds if the rewind and pause buttons are pressed repeatedly as the round ends.