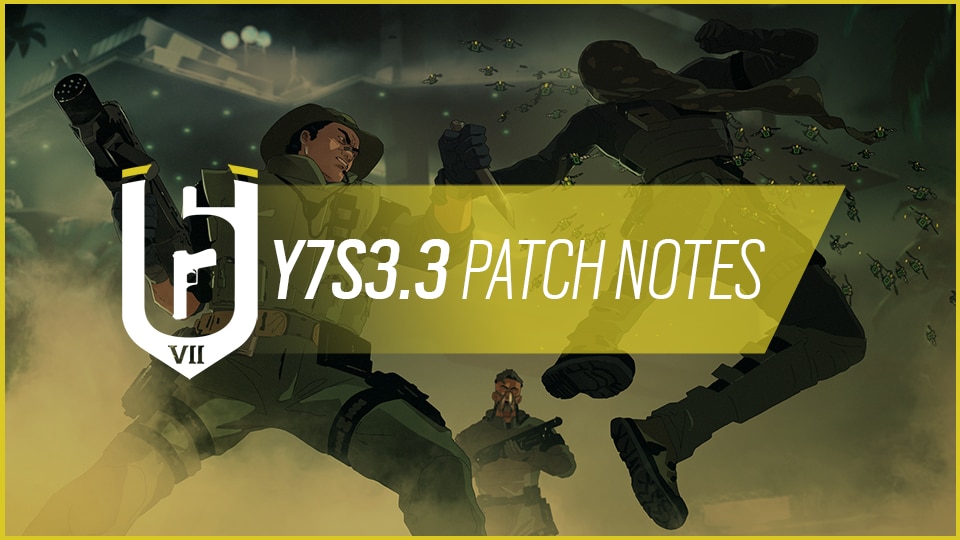 See the upcoming changes to Rainbow Six Siege with the release of Y7S3.3.

FIXED - Camera gets stuck in drone view.
FIXED - Operators in downed state are eliminated if they fall through a hatch.
FIXED - Dot reticle remains on screen if player aims down sights multiple times at once.

FIXED - Multiple LOD issues on various maps.
FIXED - Using Kiba Barrier on top of shelves in Basement Arsenal Room of Club House allows players to climb on top of them.

FIXED - Warden is unable to activate his Glance Smart Glasses during a custom session occasionally.
FIXED - Under Barrel Laser cannot be equipped on the RG15.
FIXED - Grim does not receive score points when an ally eliminates an enemy pinged by the Kawan Hive.
FIXED - Ace's S.E.L.M.A. Aqua Breacher will attach to the opposite side of a wooden wall, but will destroy the wall as normal.
FIXED - Dokkaebi is able to use her Melee during the deployment of the Logic Bomb.
FIXED - Vigil is not receiving score points when activating ERC-7 before entering the Kawan Hive.

FIXED - Objective Markers, Operator Names, and Icons disappear the first time the spectator changes floor in Spectator Mode.
FIXED - Barricades are still visible after being destroyed if the player is joining a match in progress.
FIXED - Unmoved hostage eliminated by Goyo's Volcan Shield will be attributed to the one detonating it.
FIXED - In Match Replay, users are unable to select drone view after using the rewind function to go back to the preparation phase.
FIXED - Crosshair Occasionally missing after spawning.
FIXED - Various UI issues.
FIXED - Various Shop and Customization issues.
FIXED - Various Localization issues.

For additional information and further details on the changes listed below, please see our Y7S3.3 Designer’s Notes.