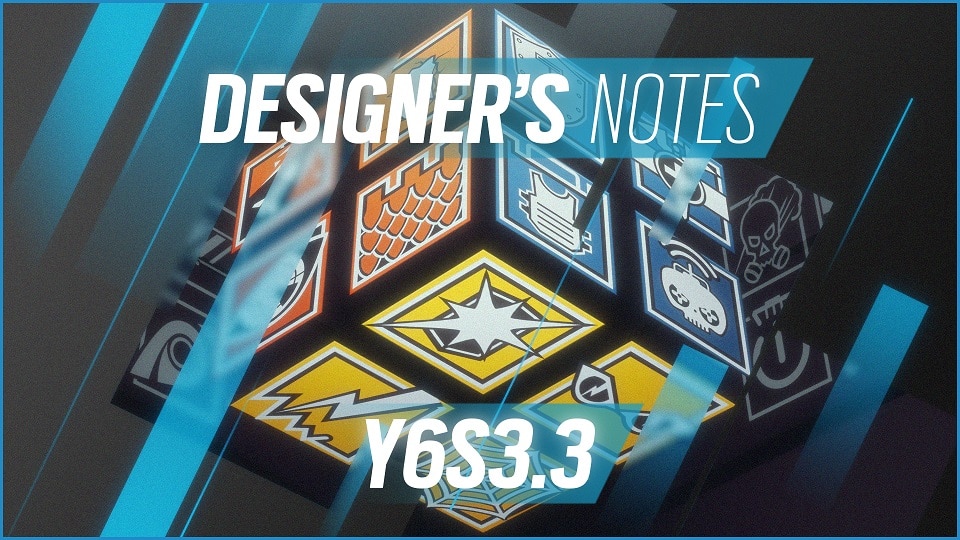 In this latest edition of Designer's Notes, we'll go into more detail about the balancing changes that'll come with the Y6S3.3 patch and give you an insight into the reasons behind these changes.

For more information on all the updates, changes and content that launched as part of Crystal Guard, check out the seasonal patch notes here. At their core, Castle's Armor Panels represent one of the most quintessentially "Siege" Operator abilities - reinforcement is in Siege's DNA. While they've served him well over the years, we felt his stock was a little limiting, especially with such a clear counter in Sledge.

Starting each round with one additional Armor Panel, this is expected to change how Castle approaches each map and encourage more creativity in their placement. Now, he'll be able to employ more complex defense setups and stand out as a more effective anchor pick, while feeling less of a sting if there's a Sledge on his case. Of course, this increased utility can't come without a small price - namely that it will take less melee hits to break each panel. Given the amount of time and effort required to destroy one of these with even the reduced value, we feel this is a more than fair tradeoff for the increased defense these barricades bring to the table.

Clash, say hello to the Super Shorty shotgun! With a pick rate of only 3%, the P-10C hasn't been seeing much use in Clash's loadout. Given that she already has a machine pistol at her disposal, we wanted to introduce a weapon to her kit that offers a different option from what she already has.

The Super Shorty will open up more gameplay options and utility for Clash, lending well to her up-close-and-personal style of play.

If one Entry Denial Device on a door is a fun surprise, what would you call five EDDs? In an effort to spice up Kapkan's gameplay, he can now place a greater number of traps on doors and window frames, both increasing their active coverage and possible damage output.

It should be noted that while he is no longer limited to one trap per door or window, the deployment space on each will still have a limit depending on their size. This means that while windows are capable of housing fewer EDDs than doors, they can still be stacked on either side of the frame, including on the inside and outside to maximize explosive impact. Triggered traps on a given frame will then explode in unison, dealing 60 damage each. For reference, depending on armor, you can expect three or more traps to be lethal (or just about).

This is expected to open up quite a few more options for creativity when locking down a site as Kapkan. Now, Attackers will have to contend with more unpredictability when facing him, as trapped doors can go from being a mild inconvenience to a full frag real quick. This should also make his ability function more logically, as given its size, it makes sense that attaching multiple traps to a single surface should be possible. While you'll never come across a round with this many EDDs, this should help illustrate just how stacked windows and doors can get with Kapkan's rework

Even after the recent rework to her Banshee, Melusi continues to be a strong Operator. In particular, her win rate continues to trend upward. In order to tone down her fragging potential and focus in on her intel side, we've replaced her Nitro Cell with the Bullet Proof Camera.

This, combined with the set-it-and-forget-it intel-gathering capabilities of her Banshee will help to better define Melusi's role in matches outside of seemingly being able to do it all. She's an intel gatherer at heart and this should help to increase the utility value she brings to matches at the expense of some of her frag power.

As some of you may remember, we tweaked Oryx's Remah Dash in Y5S2.3, which included an increase to the time it took to refill charges. While the other aspects of the tweak have worked well since then, we've decided to roll back the charge refill time.

Charging around as Oryx is one of the main things that sets him apart, so we want to make sure players are able to make the most of this mobility. After all, waiting around to smash through an unsuspecting wall is no fun, so get ready for less downtime and more wanton wall destruction.

You can expect some more tweaks to Oryx in the future as well. His ability to climb through hatches is key to his gameplay identity, but it's a little slow at the moment. We're working on a solution to speed this up slightly, but it will take more time, so stay tuned.

Similar to Oryx, we've decided to roll back a change to Wamai from Y5S4 and tweak him slightly to account for this. We've heard your feedback about wanting a more viable alternative to Jäger and his ADS, and hope that by increasing Wamai's total Mag-NETs, this will increase his map control.

To account for the 50% increase in total Mag-NETs, their catching area has been decreased, which is expected to make their placement more predictable and easier to spot for Attackers. While this will temper their effectiveness slightly in larger environments, when used in the tighter confines of many maps, players are unlikely to notice a huge difference. 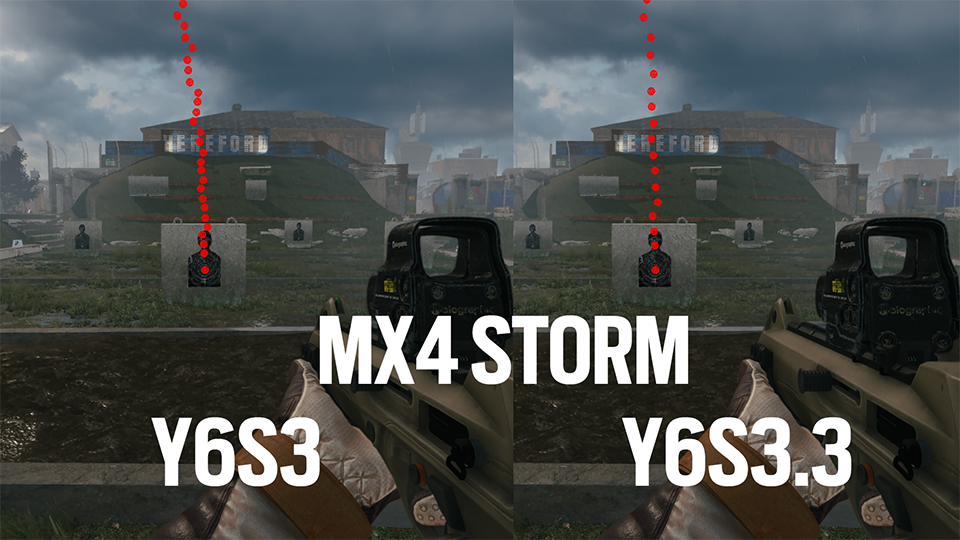 Approaching Y6S3.3, Alibi has one of the three highest K/D ratios (1.26) of all Operators when equipped with her Mx4. In an effort to give it a little more kick and require a little more finesse to effectively handle and secure frags with, we've increased its vertical recoil. As you can see from the above recoil comparison, the change will require some re-adjustment from players, but should still be manageable to handle. 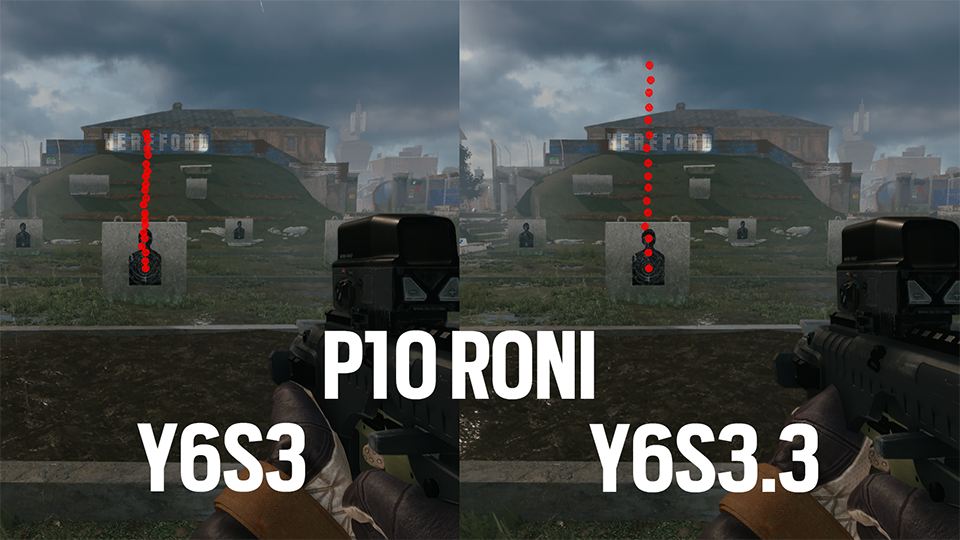 Please note that recoil simulations shown are representative of recoil on PC without attachments.

Similar to Alibi above with the Mx4, Mozzie also has one of the highest K/D ratios (1.26) with the P10. While Aruni's K/D isn't quite as high, the power and precision of the P10 has helped to make her already-stacked kit - from the strong utility of her Surya Gates to her passive which allows for the creation of infinite rotation holes - a force to be reckoned with. To help bring both Operators back in line with their fellow Defenders and encourage some more experimentation with their loadouts, the P10 is getting a nerf to its recoil and magazine.

In its pre-Y6S3.3 state, the P10 had an extremely tight pattern that made it extremely effective, as proven by Mozzie's impressive K/D. While its vertical recoil has increased, when compared to the updated Mx4 above, the updated P10's recoil should still be slightly easier to manage. It should still represent a strong pick for both Operators, but we also hope that it will open the door to more experimentation with Aruni's MK 14 and Mozzie's Commando. Plus, with the P10's magazine reduction, players will want to make sure they have a solid bead on their opponents before firing, as they'll have less bullets to fall back on.

When we introduced the Hard Breach Charge a year ago, the intention was to give Attackers more versatility and approach options - something we're happy to say it achieved, especially in lower ranks. One thing we've noticed, though, is that this flexibility is sometimes hindered by its single use. This can dissuade creative or risky plays in favor of choosing the safe option, so we've added another HBC to the applicable Operators' loadouts.

We expect this to encourage more creative uses of the gadget, whether it's for creating an additional rotation or tying in some more vertical play.