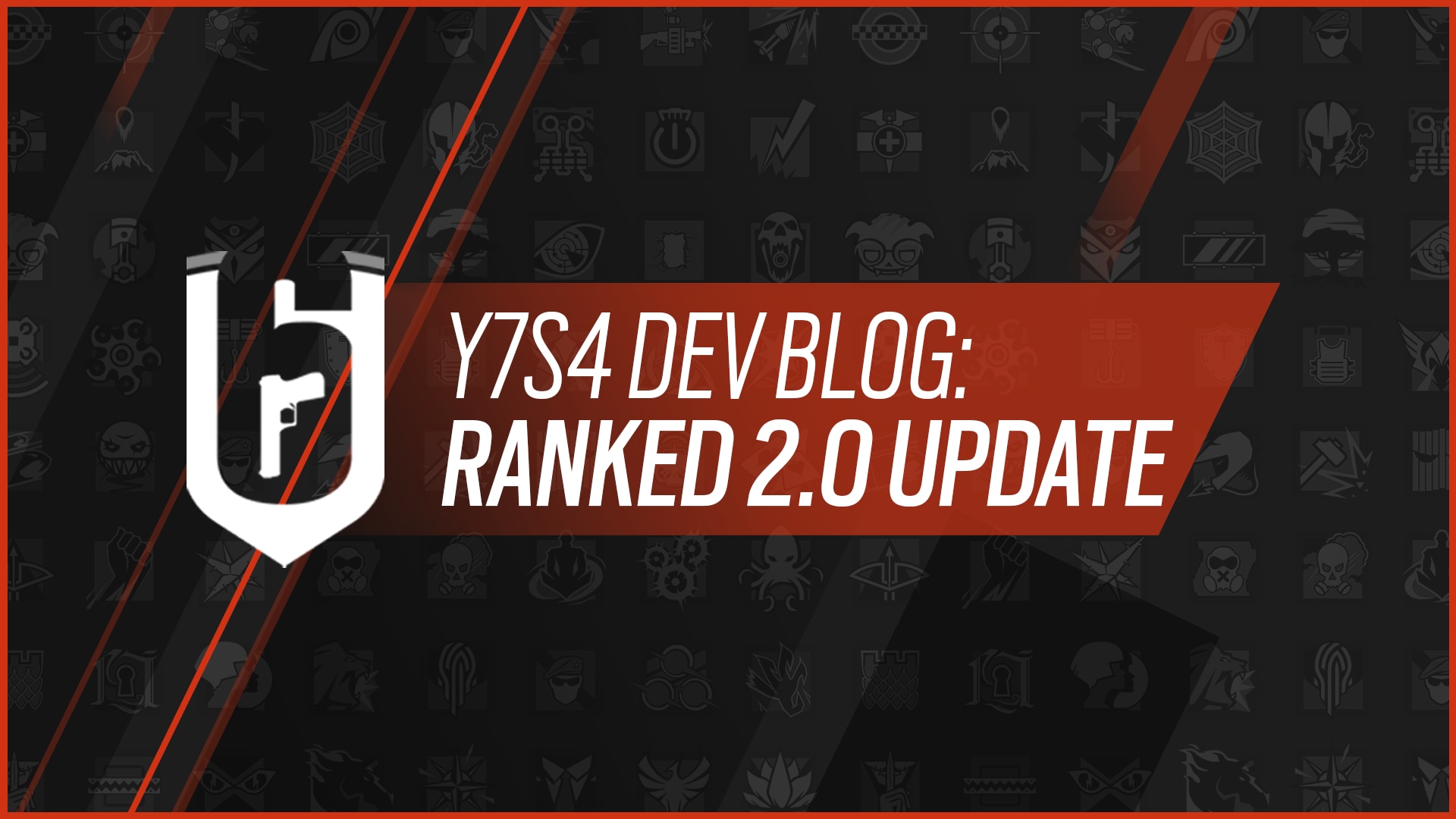 In the past, the Ranked System was a pure skill system in which there was only one value, the MMR, used for Skill and Rank. Any change that we needed to make on the Ranked system was affecting the skill and thus the matchmaking.

WHAT ARE WE CHANGING?

We are splitting what was previously known as MMR into Skill and Rank.

Your skill (what was previously known as MMR) will be a hidden value that will be used for matchmaking.

Your skill represents your ability to win a game. Comparing two teams' skill gives you the probability that one team will win against the other. The higher the difference, the more likely a given team is going to win. When two teams with the same skill levels are matched up with each other, they both have an equal shot at winning. The algorithm used in Rainbow Six Siege assigns two values to each player: an estimation of their skill (μ) and the uncertainty of this estimation (σ).

The update of your Skill as a player has not changed with this new system, meaning that the Skill is updated solely on the outcome of your match. If this outcome is unexpected (for example, you lost against players with a lower skill than your team), the skill updates will be more substantial, and vice-versa. In addition to that, the more confident we are about your skill (i.e., if your σ is low), the smaller the updates will be.

Let’s take a simple example with only two players: Hibana vs Pulse. The values in this example do not reflect the actual updates that would happen with our system, but it should give you an understanding of the situation. Hibana is a Gold player (μ ≈ 29), and has been playing at that level for quite some time. Hibana’s rank has a low uncertainty value attached to it, so σ ≈ 3. Hibana faces Pulse (a Copper ranked player, but he has a lot of heart), and loses. Due to the low uncertainty value, it is likely that Hibana just had a bad game, so her skill level would decrease, resulting in μ ≈ 28. This is due to the system taking into account the rank of the enemy you have lost to. If Hibana lost to someone that was Gold, the adjustment would be closer to μ ≈ 28.5. Losing to a Diamond would have resulted in a change to μ ≈ 28.9.

That being said, Pulse is still relatively new to the game, and our system is attempting to determine where he should be placed (μ ≈ 17 and σ ≈ 6). By Tachanka’s grace, Pulse won the match, so we would increase his skill level to 20. His victory against Hibana has helped us to determine that he may be a better player, so his uncertainly has dropped a small amount (σ ≈ 5.5). The large increase in skill level rating is a result of Pulse being a fairly unknown player, and our confidence in Hibana’s placement.

Rank, on the other hand, will be used for the progression through the competitive ladder. Rank will update after every match through RANK POINTS. The way it works is that the amount of RP that you win or lose after each match will be proportional to the difference between your Skill and your Rank.

Additionally, we are introducing a new Rank between Platinum and Diamond called “Emerald” to soften the steep progression between the upper part of the ladder.

Let’s see a couple of examples:

Player A is a Champion player (+5000 Skill) that just started playing this season ( Copper 5 Rank ). This player, since we don’t reset Skill anymore, will be matched from the start of the season against players of the same Skill but since their Rank is very far away from their Skill, each time this player wins a match, they will be rewarded with a lot of Rank Points (during Y7S4 this will be around 80 RP which is the maximum) in order to progress quickly towards their real Rank, similarly, each time this player loses a match, the Rank Points they lose will be minimal ( during Y7S4 this will be around -9 RP which is the minimum) as they are very far away from their real Rank. For this player, this gain/loss difference will continue like this for the large majority of their climb towards their real Rank and should see a decrease in their gains and an augment in their losses at around the Diamond Rank.

Player B is a Silver player ( 2200 Skill ) that has been playing this season for some time already and they managed to achieve their Rank at Silver II. This player now has a Rank that matches their Skill and thus, each time they win a match, they will be awarded a standard amount of RP ( around 40 RP) and each time they lose, they will lose a standard amount of RP ( around 30 RP). We introduced a difference between the standard win and the standard loss in order to allow players to always try to aim for a higher Rank and improve throughout the season. This does not mean that this player will be granted free Ranks since we assume that a player who has reached their real Rank will probably sit at a win rate of around 50%, but if this player keeps playing and trying to win, they will probably end the season at a higher Rank of their previous season and thus earning more rewards!

When you win enough RP at the end of the match, you will go up to the next division. Each division consists of 100RP.

RANKING DOWN AND THE DEMOTION SHIELD

When losing a match and the resulting RP is below 0, you should normally get ranked down to the previous division or Rank, but we have introduced a new system called Demotion Shield that will prevent that from happening and instead leave you with 0 RP. This will only happen if you have more than 0 RP by the start of the match. If you lose a match when you already have 0 RP, you will rank down normally.

With this new system in place, we are removing the placement matches as we will no longer reset your skill every season, and thus we no longer need them to know your skill at the start of the season.

Placement matches were not working as intended in the previous versions of Ranked, resetting the skill forced us to have a system in place to try to guess your real skill before starting your Ranked journey but they were too inaccurate for that purpose as the system didn’t have time to have a correct guess.
For example, a player who just started playing Ranked in Rainbow Six: Siege could have very good placement matches (whether by their own skill, by luck or by getting “carried”) and the system would have placed that player far above their real skill, making Ranked a very frustrating experience having to play against much more experienced players, or, on the other hand, a very skilled player who was very unlucky or had very bad matches during the placements could be placed too far below their real skill, destroying the competition until they got to their real skill bracket.

Removing the skill reset will ensure that the Matchmaking quality of your games will not deteriorate at the start of the season as we will already know your skill level and you will be matched against similar opponents.

What we will be resetting is your Rank every season, and at the start, everybody will be placed in Copper 5 and climb up from there.

From now on, we are removing the Squad MMR Restriction that was preventing you from playing with your friends.

Squad MMR Restriction was a necessary evil that we had to put in place to prevent some exploits in the system, but we know the importance of being able to play Rainbow Six: Siege with your friends. The separation between Skill and Rank now allows us to have different measures running on the backend to prevent those exploits without compromising your ability to play with your friends.

We do believe that this new system will make everyone’s experience much better, but we will be monitoring this very closely as we now have the tools to act if we see any abuse taking place.

WHAT DOES THIS MEAN?

Overall, your Ranked experience will now be a much steadier progression towards your goal, but you will notice that the closer your Rank gets to your real Skill, the updates that you get after each match will be smaller.

With how the seasons in Rainbow Six: Siege are structured, we believe that this new system will allow players to reach their goal more reliably without the feeling that they are bouncing from one Rank to the other without progressing.

WHAT IS TO COME?

With this first batch of changes coming to Ranked we have laid out the foundations to build a much more resilient Competitive structure that will help us improve without compromising the existing ecosystem. We will be monitoring the new Ranked during S4 since systems as massive as these ones are always tricky to land on the first shot without the real experience of exposing this to players, we did our simulations, but reality will always be different, and we are happy to listen to your feedback.

With how the system is built we can easily tweak the numbers behind Ranked without having to rebuild the system, so expect some tuning and changes in the coming seasons!