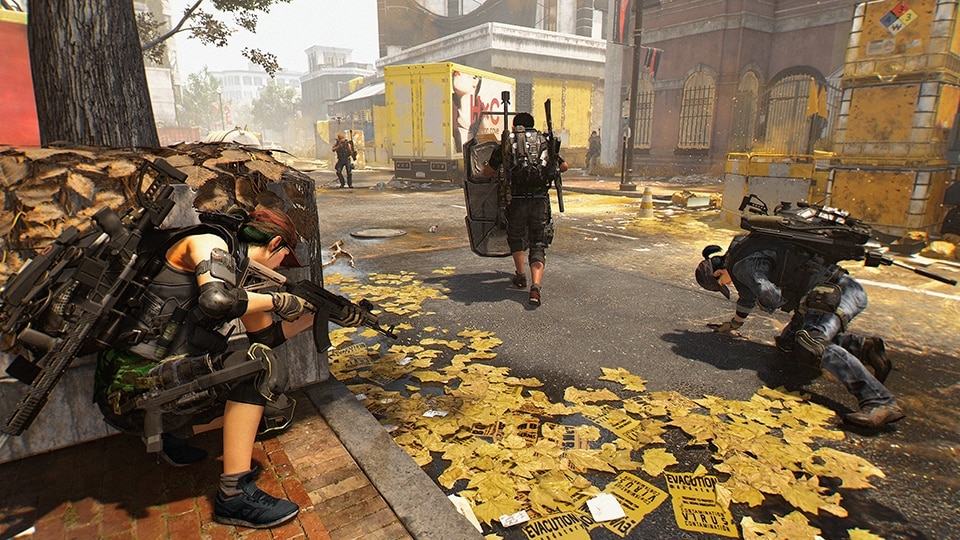 Intelligence Annex: PVP in The Division 2

Welcome back to Intelligence Annex—our series of development blogs detailing all things in The Division 2. We heard the community's call for PVP news, and we are here to discuss the two methods of PVP with you today—the Dark Zones and organized PVP.

We have implemented a three-tiered progression system for Rogues in The Division 2. There are two ways for players to engage with our new Rogue progression – world interaction and toggling:

For a complete list of new features in the Dark Zones, visit our blog.

Organized PVP is back in the Division 2! For players who crave dedicated, direct PVP action, they can find it in Conflict—our destination for organized PVP. At its core, this type of PVP creates an opportunity for players to face off in arenas without AI complicating their engagements. Here, players queue into two organized PVP modes: Skirmish and Domination.

Skirmish is returning in The Division 2, but the mode has been reworked to create a more tactical team based experience! In this 4v4 Team Deathmatch mode characterized by short time limits and fast-paced gameplay, each team has a limited numbers of reinforcements. Reinforcements serve as a team life pool that deplete with each respawn. Once a team's reinforcements deplete, they enter an elimination phase. Once a player is eliminated, they are out of the game.

At the launch of The Division 2, we are excited to introduce our unique take on the classic PVP game mode, Domination. First, the three objectives airdrop into the map shortly after the match begins in order to give teams a chance to fight for control of the objective area before it becomes active. In addition to passively capturing while in position around the objective, players have the ability to active-capture using an interactable on the objectives themselves. Completing this interact will instantly flip the objective to your team, but these actions take time. Players are severely exposed while performing these actions, so expect high-risk/high-reward situations in Domination.

Both modes do not stop there. We have additional gameplay features that will change the outcome of organized PVP matches if used efficiently. Boosts are available in both Skirmish and Domination. These are pre-placed supply crates that reward random team bonuses when activated. Examples include extra armor or extra damage for a limited time. Supply Drops are also being implemented into end-game organized PVP, and these provide Specialization Ammo. Players receive announcements that Supply Drops are inbound, and these land on the map. Proceed with caution, as Specialization Ammo drops if a player is killed while in possession of it.

For the first time in The Division, Conflict will feature bespoke maps designed specifically for great PVP focused gameplay. These arenas are grounded and inspired by Washington, D.C. but they are not a 1:1 visual representation, as we did not want to sacrifice PVP balance for authenticity. The following arenas were built specifically with PVP in mind:

Matchmaking for organized PVP also occurs in two separate brackets. In one bracket, all players who have not reached World Tier and began end-game are matched together and normalized to the same power level. In the other bracket, all players who have reached World Tier are matched together and normalized to the same World Tier. While normalization is active to reduce the peaks and valleys between players with high survivability and high damage output in organized PVP, minor stat advantages will still be available to players who put the hours into their builds. While balancing is a factor to take in account when crafting a build, remember that build choices are still unique and offer a variety of gameplay options.

Skill-based matchmaking, based on many factors such as wins and losses, also plays a role in organized PVP matchmaking. When completing matches, players increase a PVP level that exists separately from Dark Zone and overall character level as well.

To wrap things up, we are happy to announce that separate balancing is in effect for PVE and PVP modes. Skills and talents in organized PVP, for example, will have normalized versions that have different statistics than their PVE counterparts. In The Division 2, we want to keep PVP competitive and healthy without negatively impacting players who enjoy PVE.

Thanks for joining us in today's PVP discussion! Be sure to join us over on the Official Forums or on the community Reddit to discuss today's article; we would love to hear your thoughts!