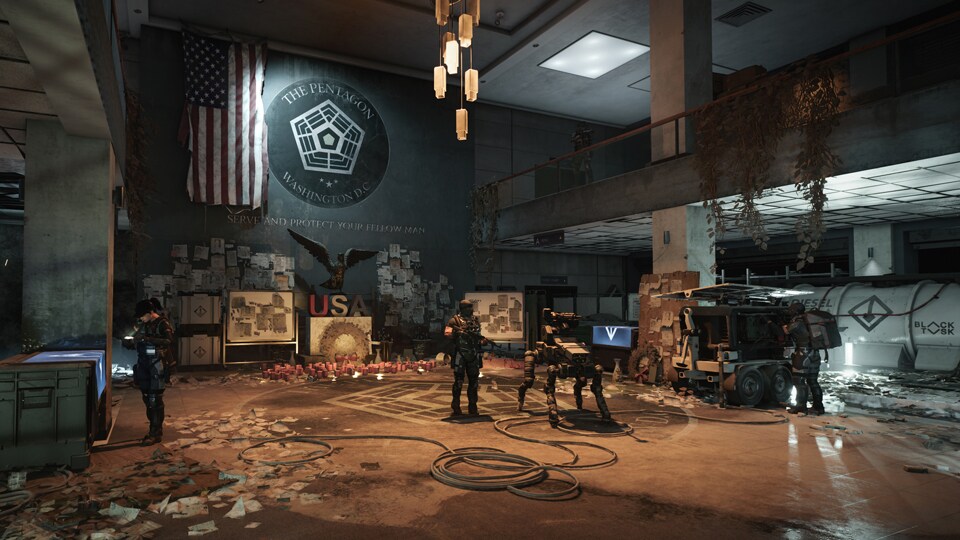 Following their invasion of Washington D.C., Black Tusk has expanded their operation and placed the Pentagon under siege. You must infiltrate the facility and secure it, as well as uncover whatever the Black Tusk are so adamant about finding.

With Episode 2, we have two main missions and an introductory mission available for everyone to play right now. We need you to confront the Black Tusk and shut down their operation before they can gain a tactical advantage over The Division.

Agent Sanders has tracked the Black Tusk activities since they began their attacks. You are to rendezvous with her and get briefed on the Black Tusk Intel that she has collected.

She will be your main point of contact, and provide radio support during your missions inside the Pentagon.

The Pentagon, HQ of the military forces of America and abandoned shortly after the Green Poison outbreak; has become ravaged by floods and storms. Following its lock-down, the Black Tusk are the first outside force to enter the complex.

These missions take you through the iconic locations of the secret military offices, rooms and hallways of one of the largest office buildings in America. Searching for the main objective of the Black Tusk within this vast military space is a daunting task. You will need to extract the information you need by confronting the entrenched Black Task Forces head on and utilize the Pentagon's computational power and resources.

Since the Pentagon has fallen into disarray following the outbreak, you will come across the remnants of the lives of the men and women who worked there following the evacuation. There is also substantial evidence scattered around the complex that could give you clues as to why the Black Tusk believe the Pentagon holds resources they can exploit, and who might have given their orders.

Deep in the underground of the complex, in the DARPA laboratories, countless assets of immense strategic value remain. The Black Tusk have accessed the complex via the flooded tunnels and are preparing to utilize an abandoned Cold War tunnel network to extract vital DARPA prototypes and assets. We do not want these assets to fall into enemy hands, and we need you to confront the Black Tusk to secure these assets for The Division.