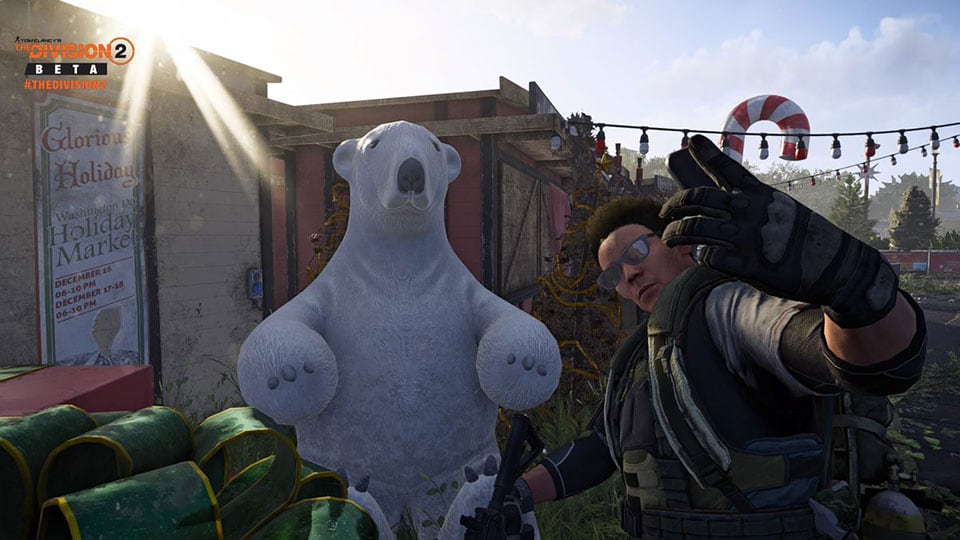 The Division 2 Through The Community's Lens

Last week, we announced that The Division 2 private beta will feature its brand new Photo Mode with its own custom Beta frame! We asked you to take as many photos as you could, and to share your creations with us on social media using the hashtag #TheDivision2Photos.

Now, we get to showcase some of these creations. Let us begin with the action-packed shots!

Foxxie, one of our active cosplayers and community members, managed to capture this while fighting off the flames coming his way.

We hope your Agent survived the heat!

The next shot was submitted by Beroxy. Taking cover is one of the base mechanics of The Division 2, and you will need to be comfortable with your surroundings, as this shot illustrates.

Moving on to the scenic shots of Washington D.C., we start with this amazing piece by Baundiesel.

That is one epic shot Baun!

Sunsets and sunrises have always felt special in The Division world, and The Division 2 is no different. A beautiful D.C. sunrise captured by NatalieAussie.

Let's not forget the night time, and the ambience it creates for taking photos. As Steve illustrates in his submission to #TheDivision2Photos.

Washington D.C. is well-known for its iconic landmarks, and you guys were sure to capture those landmarks in your shots from the Private Beta. We have the Capitol Building in the background of what's left of civilisation in The Division 2, by RAFF.

Empty streets and lonely alleys are what's left Agents, it's up to you to restore order and prevent the collapse of society. Agt. Morgan perfectly illustrates that in her shot below.

Next, we have an iconic shot of the SHD Agent, by Play Station Club. There isn't much to be said here, the photo says it all.

You arrive to D.C. after a long fight in New York, where you thought the crises was averted. But this is what you are greeted with.

A great shot by Quasymodo.

But no matter what the state of the world is, an Agent always follows the rules, and stands on the right!

Emojis have been popular among The Division community from the start. You guys even created your own challenge with the hashtag #EmojiAgent. Having said that, and as a tribute to the #EmojiAgent, we have a couple of emoji shots from the Private Beta!

First one is of course the squad selfie photo.

We will be waiting for more shots from the Open Beta and the full game, Agent Wendell.

Next from the emoji photos, is Steve. Merry Christmas to you too Agent!

Our photo mode article wouldn't be complete without the popular graffiti shots. This one was taken by Chloe, and we can't wait to see more of these during the Open Beta and after the full release!

No matter what, it always come back to this point, the reason why we are here, in the Capital. This board, this room, this building, it's mission briefing time!

What better way to conclude this other than the "Thumbs up" by Marcus. Right back at you Agent!

And with that, we conclude our #TheDivision2Photos for the Private Beta. Thank you all for participating in the Private Beta, and for sharing your creations with us from the photo mode!

Remember Agents, The Division 2 Open Beta will be live from March 1st through March 4th. See you all very soon in Washington D.C.!