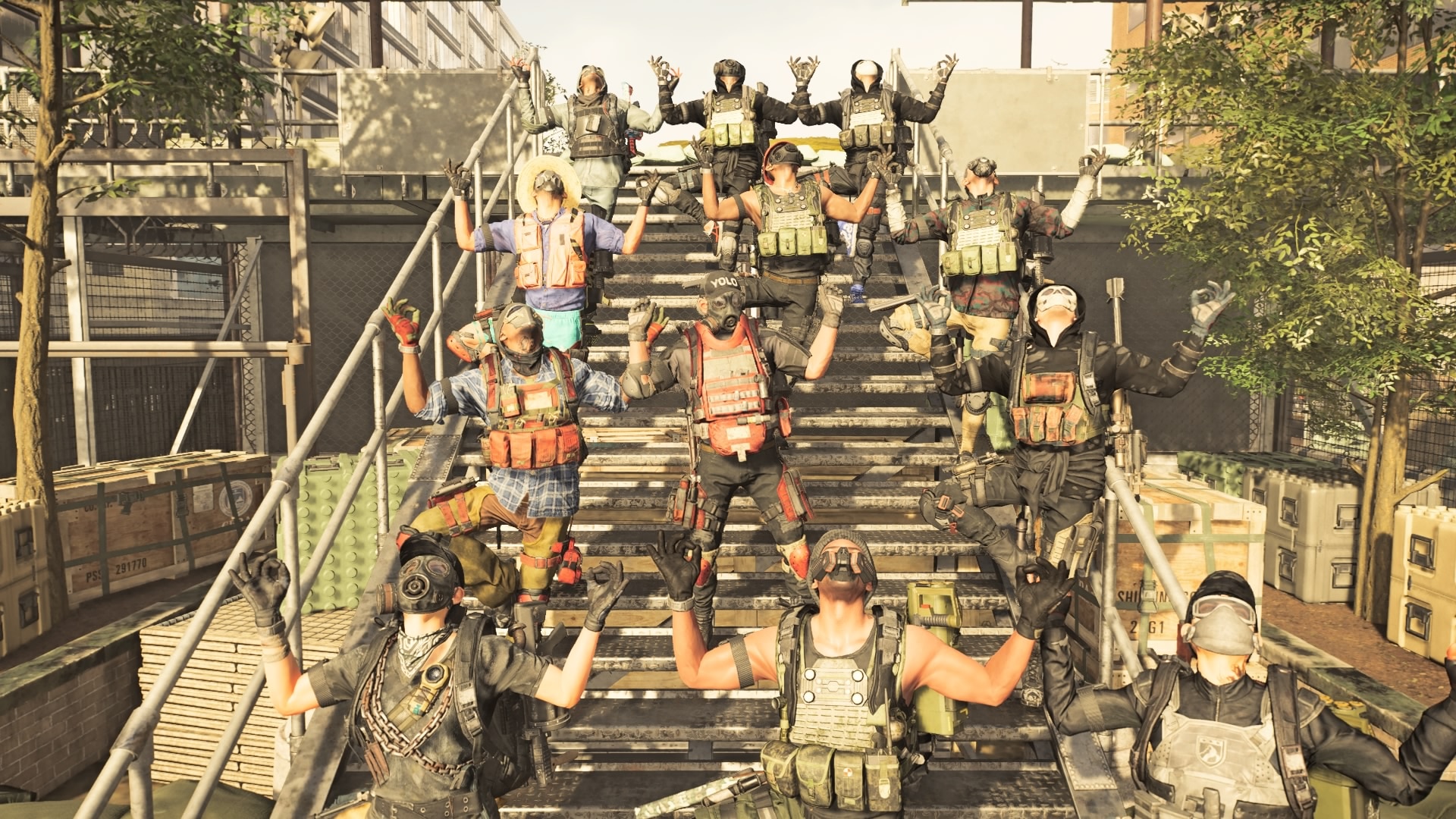 In our February Clan Spotlight, Elite Savage Gods have given us the rundown on their clan’s aspirations as well as an overview of focuses and activities that they enjoy in The Division 2.

Elite Savage Gods is dedicated to helping others and at the same time as aspiring to better themselves at any activity. They always welcome new players and members into their ranks, and offer everything from build to tactical advice; as well as assisting players through the raid and acquiring those long sought after exotics.

Read on for more information about their backgrounds and endeavours; such as tournaments, raids and Hardcore runs. 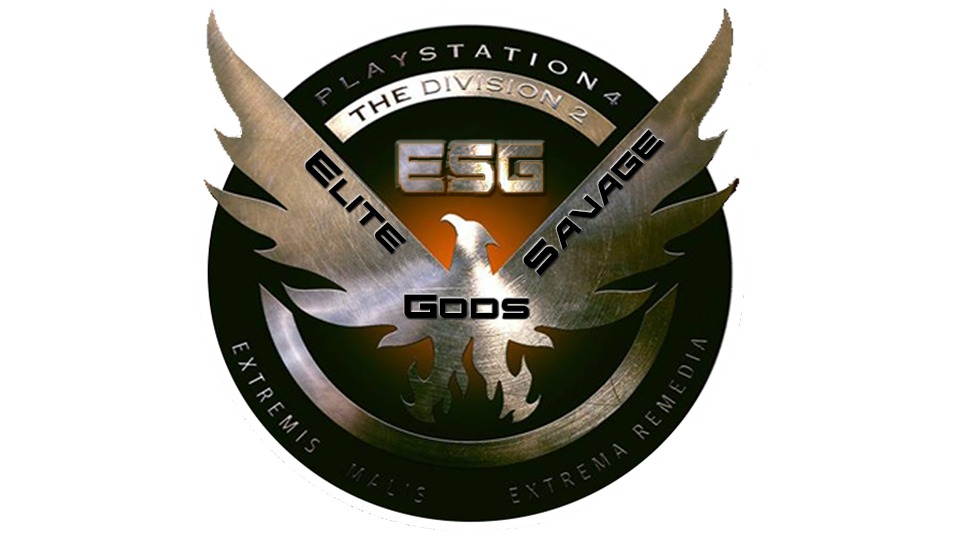 For anyone who do not know Elite Savage Gods, can you introduce yourself and your clan?

DarkSideFoos: I'm Darksidefoos, the Clan Leader of ESG. I’ve been a Division player since the very first beta. I was instantly hooked and mainly played with my core group of friends. Fast forward to Division 2, and the introduction of clans and the raid, I decided to jump in and play as I tend to be slightly competitive.

And now here we are, 9 clans later and multiple spots on the leader boards. I owe 100% of ESG’s success to the amazing LT's and members we have, that are willing to share their time and knowledge with everyone. 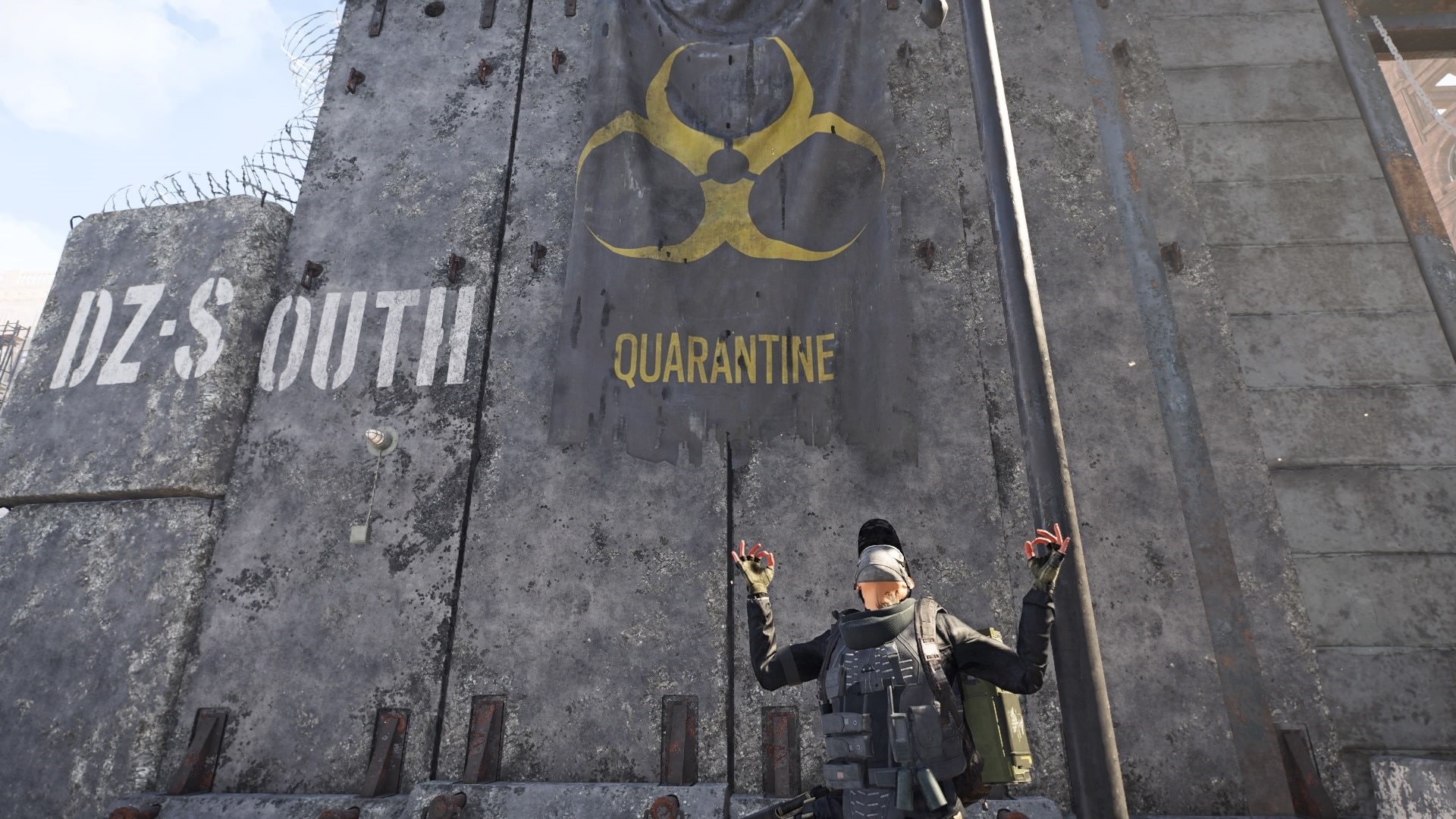 I’ve been gaming for about 20 years with a focus on shooters/looters/strategy games until Division 1 Alpha was released. I basically fell in love with this game. It’s pretty much the only game I play now, mainly because it combines shooting, looting, and strategy together.

I was part of the first PS4 Hardcore Raid completion in the world, and have helped numerous fellow agents to achieve their goals too. - badLuckTom 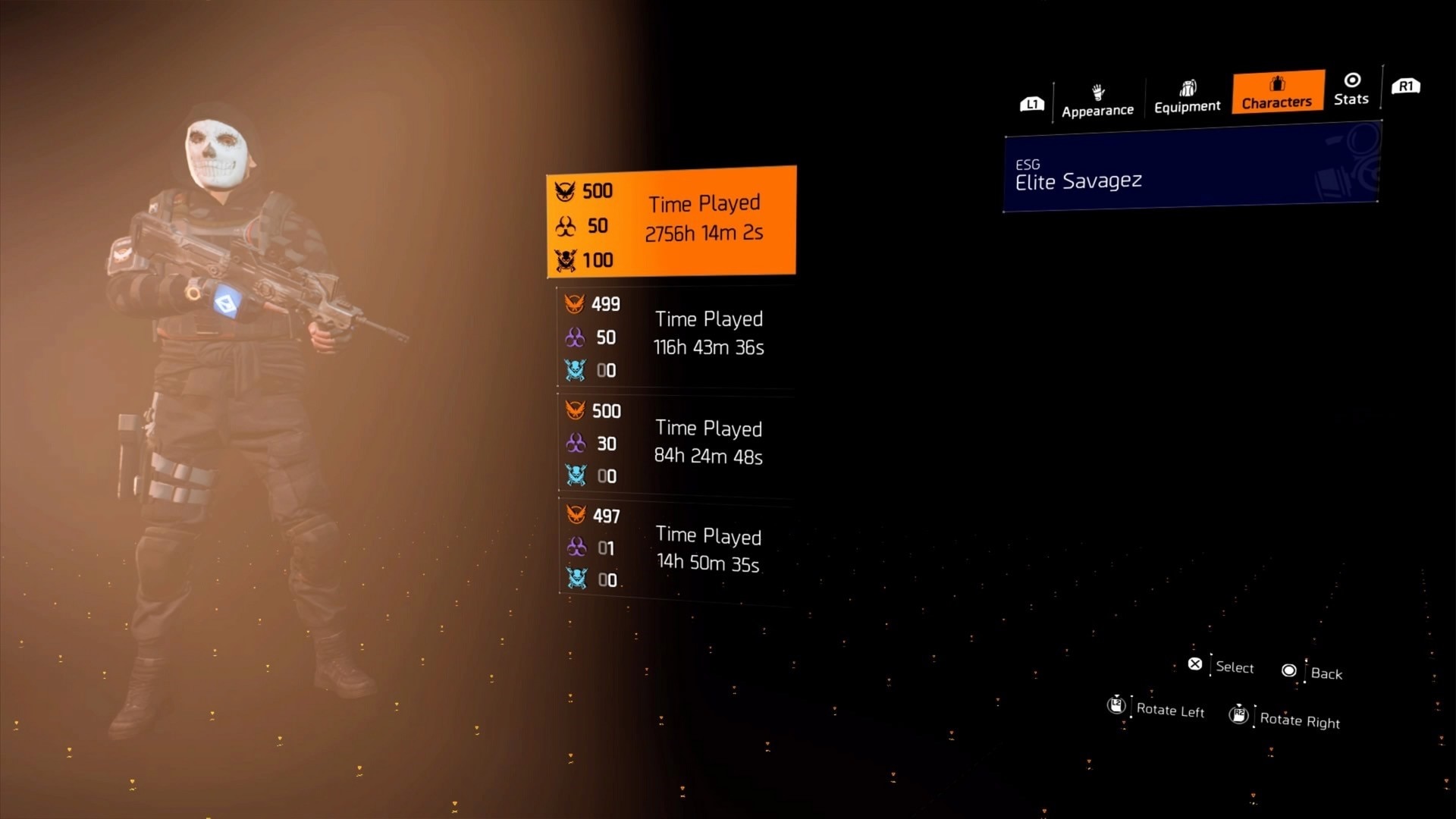 Dragon_6614: Hello, I’m Dragon. I’m from the east coast of the United States. I am a Moderator, Clan Commander and Build Master for ESG.

I came to ESG from a small clan of friends that played together on Division 1. I originally joined with the intention of improving my game play and completing the raid. From the moment I joined, I was welcomed by a Clan LT and began working with a Build Master who helped me improve greatly. Once my gear was in order, I was quickly able to get into a raid, where the members were remarkably knowledgeable and helpful in teaching me the ins and outs.

I am extremely proud of all the members of ESG, not only for their dedication and superior game play, but for their willingness to help and desire to see each other succeed.

ESG is the best clan I have ever been a part of, and I’m excited to see where the future takes us.

DuckysID: Hey I’m DuckysID, one of the moderators at ESG. I joined about a week and half after the raid came out when the clan was three clans big. Like many others, I struggled to find a solid group through LFG and finally decided to join a clan that was touted for running new people through their first clear. Indeed, they did give me my first clear as their recruitment post said within the hour of joining. The feeling of completing the raid and the advices they gave me pulled me deeper into Division, making me want to commit a lot of my time giving back to the clan.

It’s a satisfying experience being able to help those who were in my position and seeing them light up for both the clear and seeing the once elusive Eagle Bearer.

I don’t see myself ever playing Division again without this clan.- DuckysID 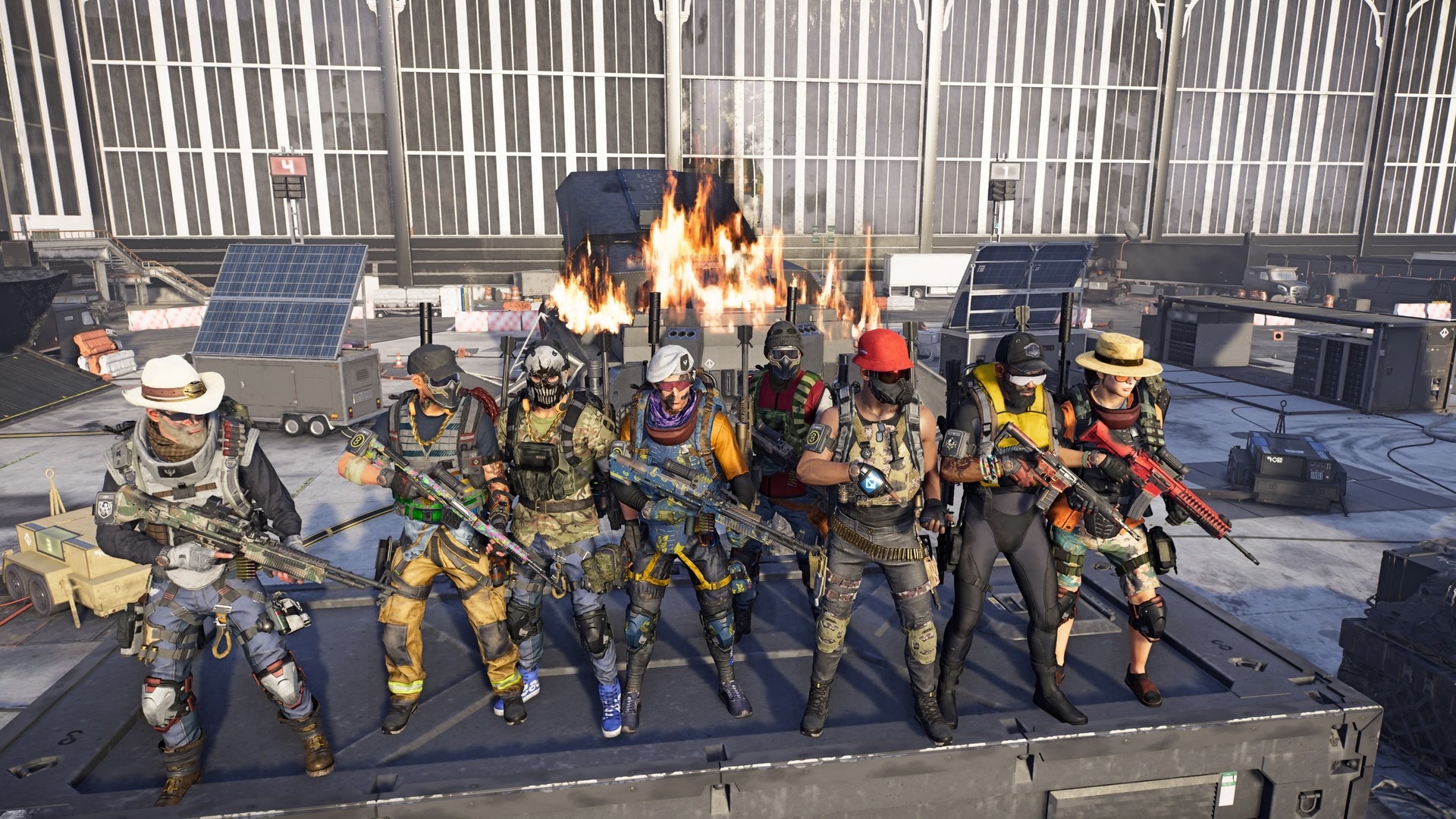 Tibs3: I joined ESG during the first week of the dark hours raid, as I (like many others) struggled to find a group to play with. After many hours, we finally beat it, and after that I knew this was the clan for me.

Now several months later, I’m a Clan Commander and Build Master and just hit 800 raid clears. I feel that ESG has a good mix of having fun playing the game but also organization and rules. This allows activities like the raid to be fun for everyone. Without these things, I probably would have quit the game months ago, and wouldn't be where I am today.

Aunik-619: Hey, what's up? I'm a 22-year-old Master’s Student from the UK. I joined ESG 7 months ago and have been a Clan LT for 5 months now. Since joining the clan, I have never looked back. ESG is an incredibly active clan that covers all aspects of the game, dominating in the raid. 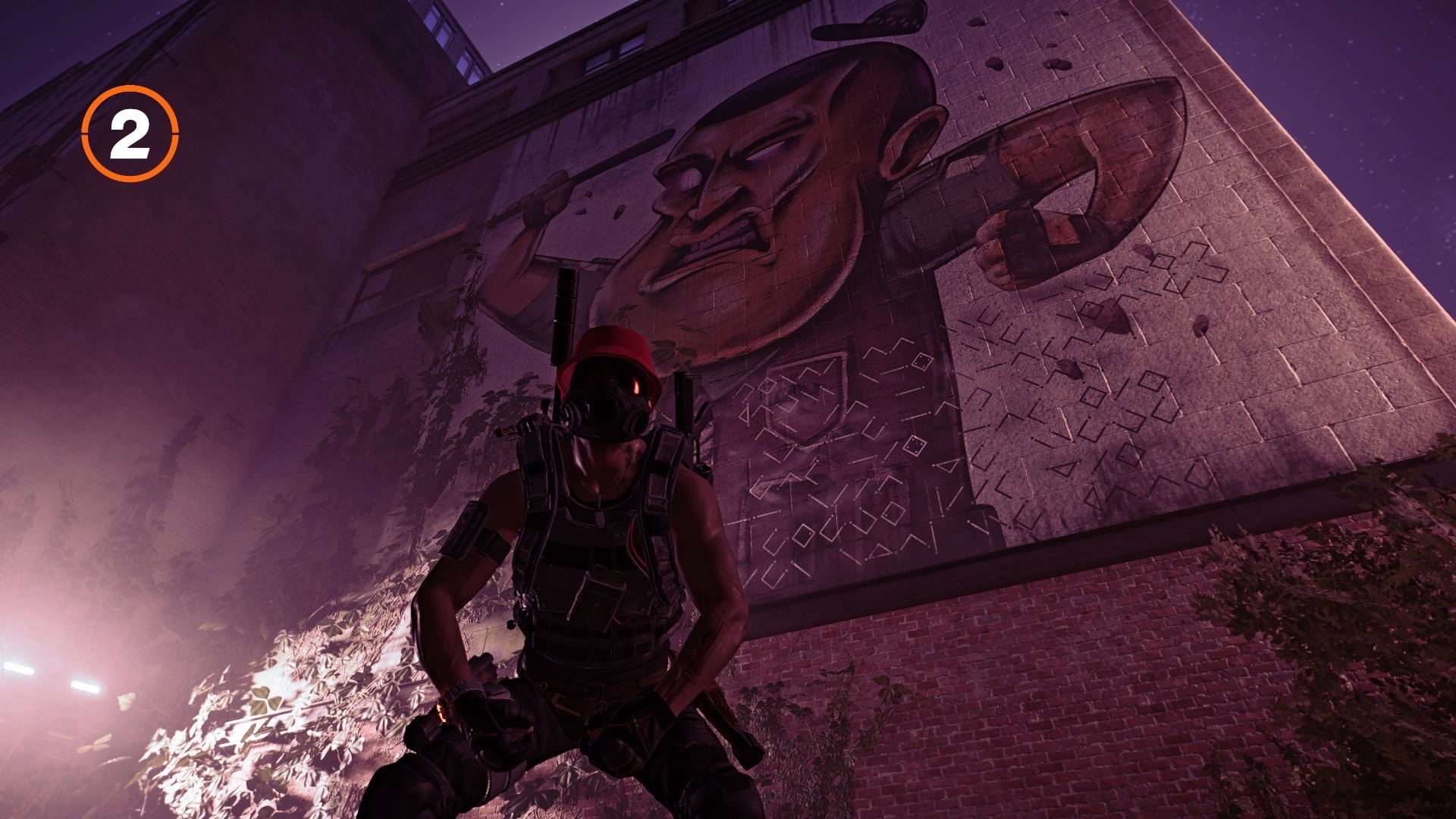 TenFoldCarnage: Salutations. I’m a Clan LT for ESG and coming into The Division 2, the search for a Clan where I’d fit in eluded me for the longest time. After searching, I told myself “Who needs a clan anyway? Not me” and continued to solo the game. Needless to say, the hardest content in the game was inaccessible/ impossible for me and solo-ing my way through the game became difficult, up until I came across ESG.

I was hesitant when I joined, as is expected of someone that’s new, but my fears and doubts were followed by a sigh of relief because I knew I found a great group of people. As an active clan that is a melting pot of cultures with players from all walks of life – we instantly clicked. Immediately, doors were opened to content that I knew I could never solo. I was able to find aficionados of both PvP and PvE content.

I would like to thank ESG for helping give The Division 2 a new dimension for players like me and hope to continue to be a part of ESG’s journey. -TenFoldCarnage 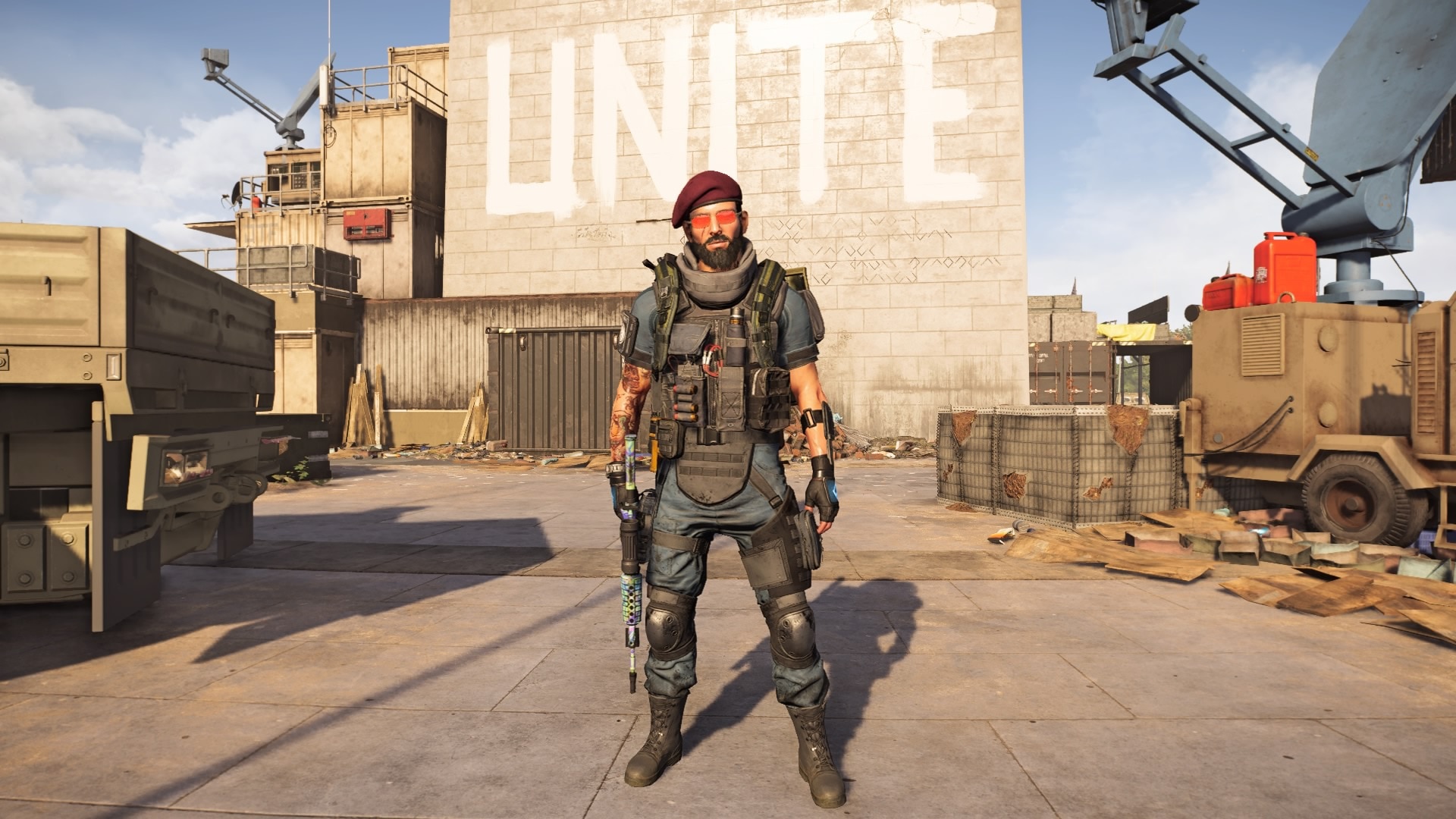 FreeEscape: Hi, my name is FreeEscape, better known as Free to those who know me. I’ve been a gamer for the better part of over 20 years, however, Division 2 holds a special place in my heart. The combination of my 2 favourite genres into a beautiful game that takes place in my hometown, the nation’s capital, was a must buy.

The beautifully accurate depiction, fluid gameplay and depth of builds is what kept me all this time. In the beginning of my Division 2 career it was a little rocky, but I eventually found myself in what I’ve seen as the largest, most inclusive clan in the PS4 network.

So, a little over 2000 hours in I’ve found myself becoming one of the clan’s build masters, raid leader, Clan LT and PvP Tournament organizers. I am enjoying all the challenges that come with the game and look forward to Ep 3 and TU 7. 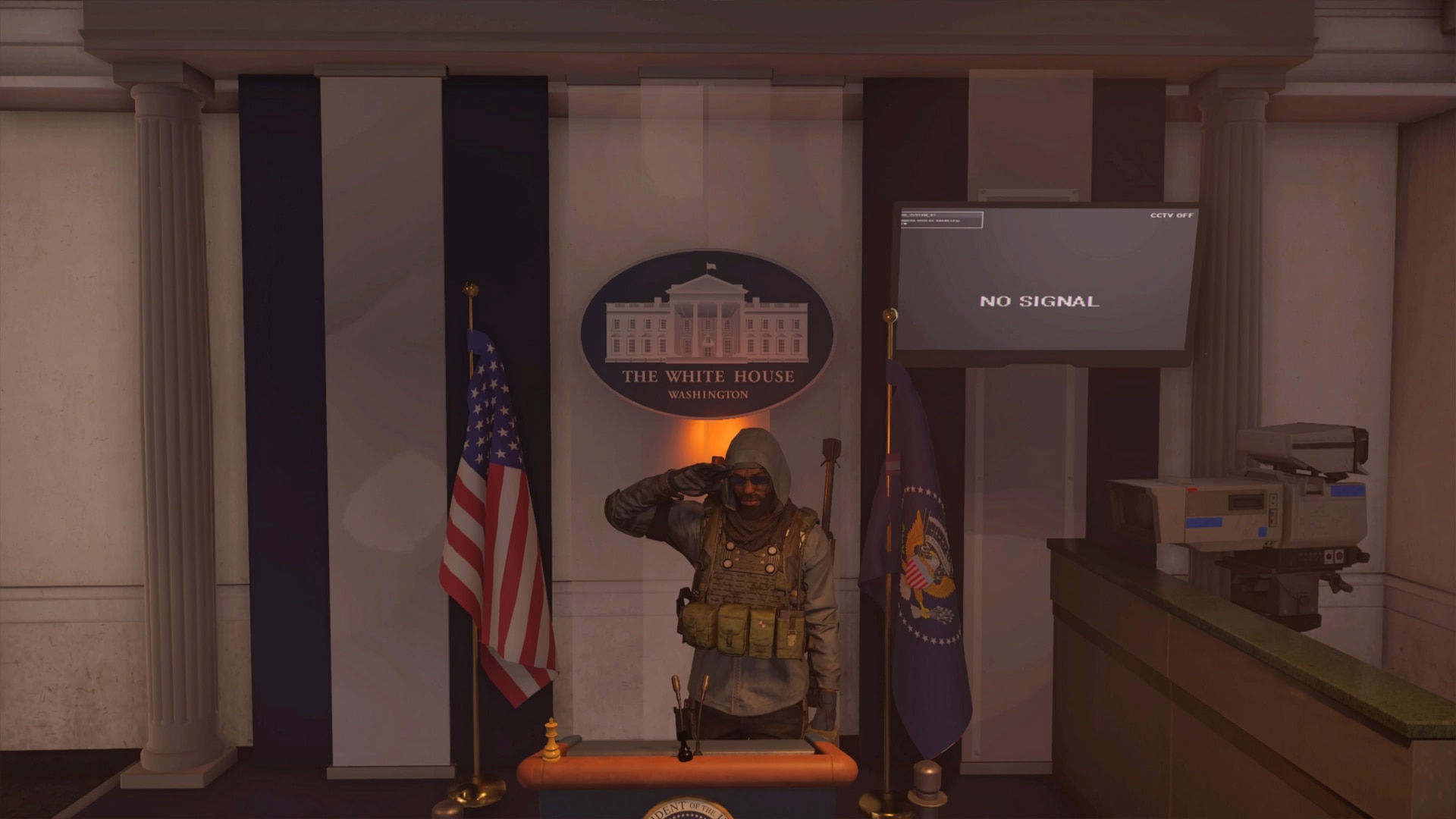 Can you share the story of how Elite Savage Gods began?

ESG was originally formed by a group of agents with a main emphasis on PvP. When the raid was released, our focus switched. As we played the raid, we developed minimum gear requirements and new strategies to complete it. We began to teach these strategies and help all our members.

Our membership quickly grew to 3 clans, then 5 clans, and we are now at 9 clans with over 400 active members - Darksidefoos

Elite Savage Gods is a pretty punchy name, why did you pick this particular name?

We chose our name because it embodies everything about us. We push our members to strive to be Elite and Savage in nature when pushing to accomplish their goals. 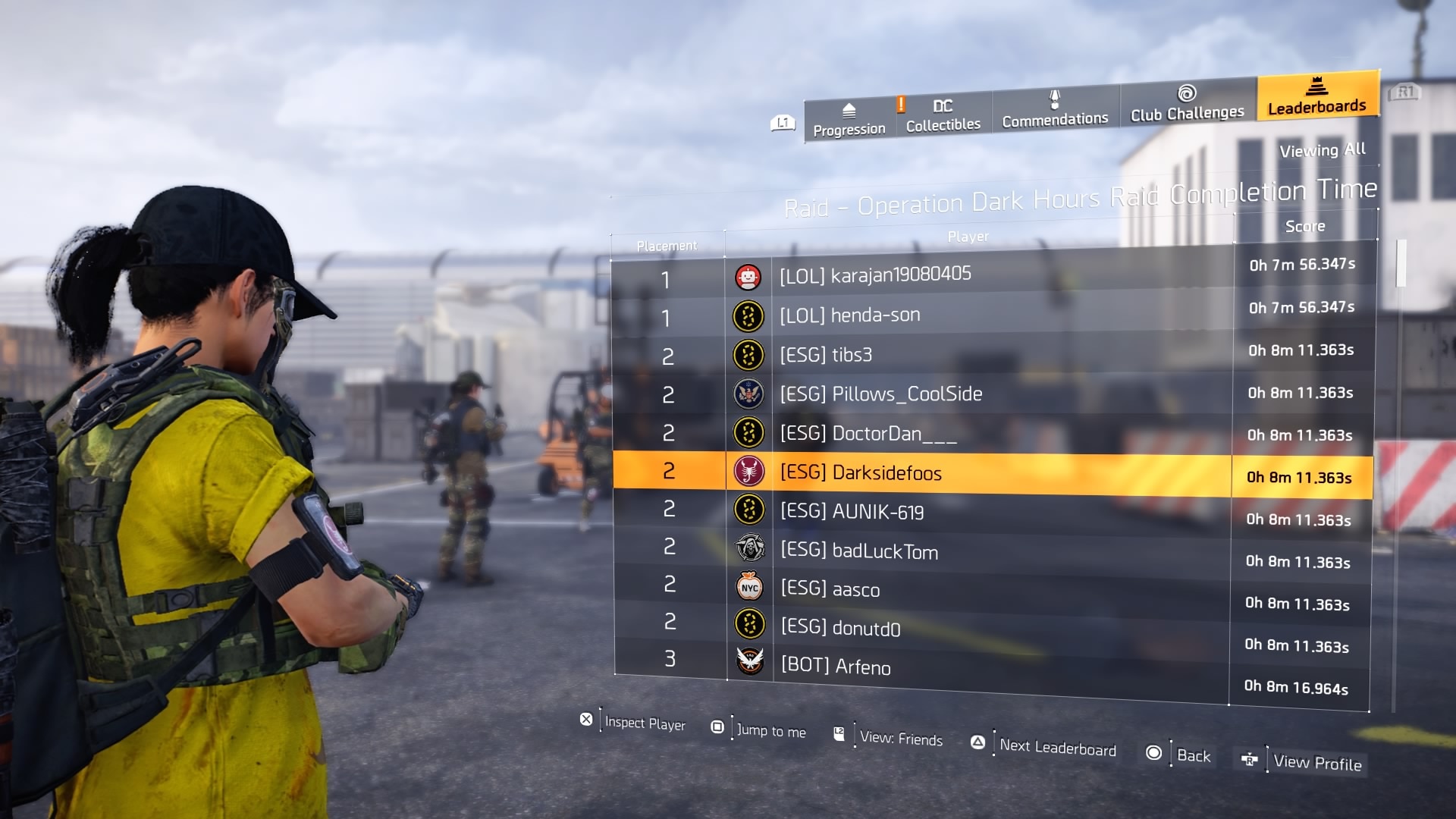 You run Monthly 1v1 PvP Tournaments in your Clan, why did you start this and what do participants gain at the end of each tournament?

We created the tournament to have a friendly competition amongst our members, to be the best of the best in PvP and the DZ. We have ranking systems for the raid and Conflict but, there was no easy way to do a ranking system for the DZ.

Our tournaments are being held monthly. We have two referees in each match to watch the players. They make sure it is a fair fight and stream the battle for our members to watch. The winner(s) of the tournament are named ESG Gladiator - at least until the next tournament when they will have to fight to keep their title!

What makes your Clan stand out?

Our list of accomplishments and the environment we provide for our members.

We hold top positions on other leader boards for Mission Completion Times, Control Points Captures, and other Open World Activities. A group of our members were also featured on SOTG for an all-female raid completion. 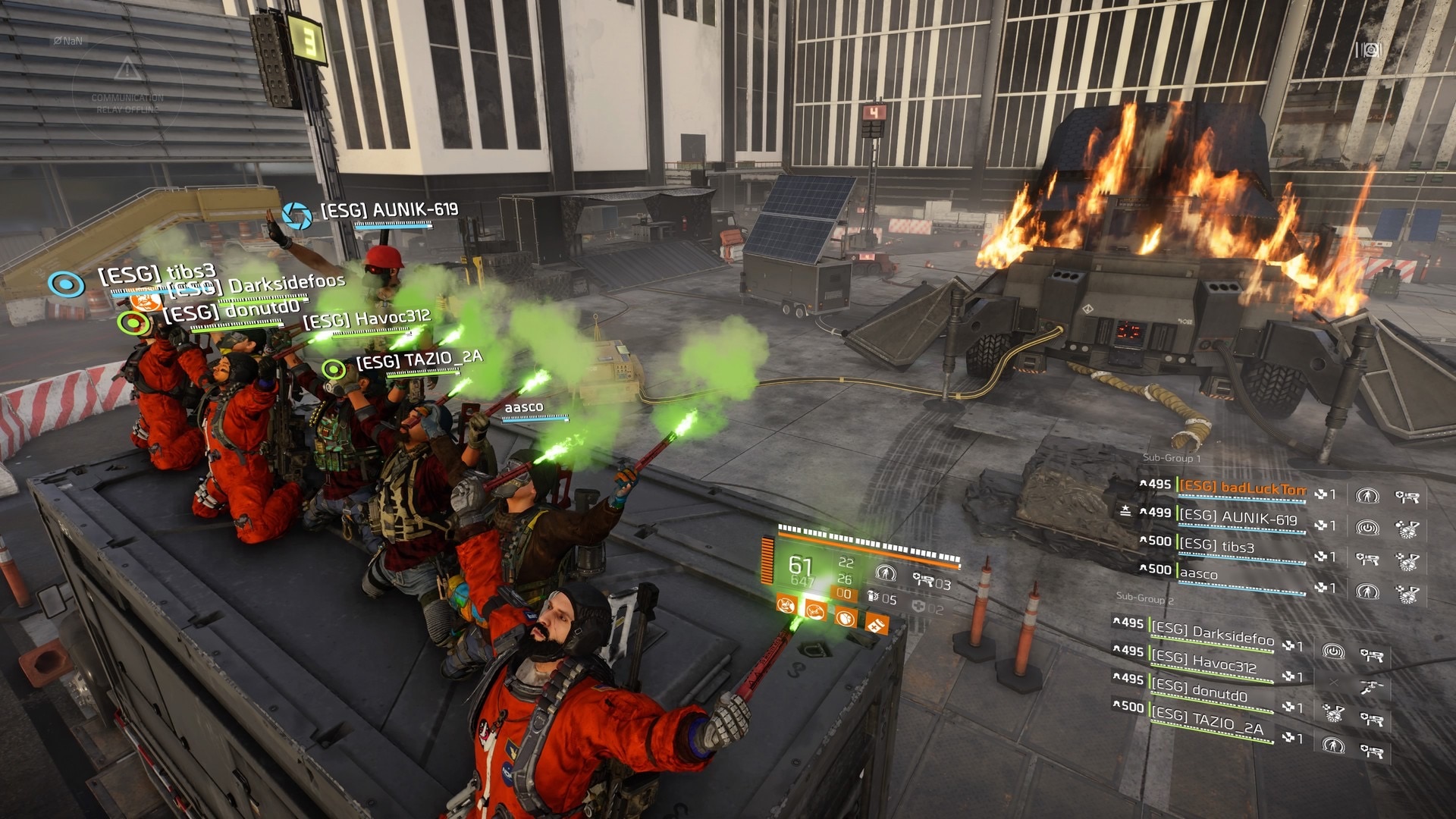 One of our current goals is to be one of the first, it not the first to complete the new raid once it’s released. - Darksidefoos

With 9 clans, everything in-game is a clan activity. Having 400+ active players that not only enjoy the game but also enjoy playing with each other makes anything you group up for a favourite so it’s hard to nail down just one activity, although our presence in the raid is very strong. 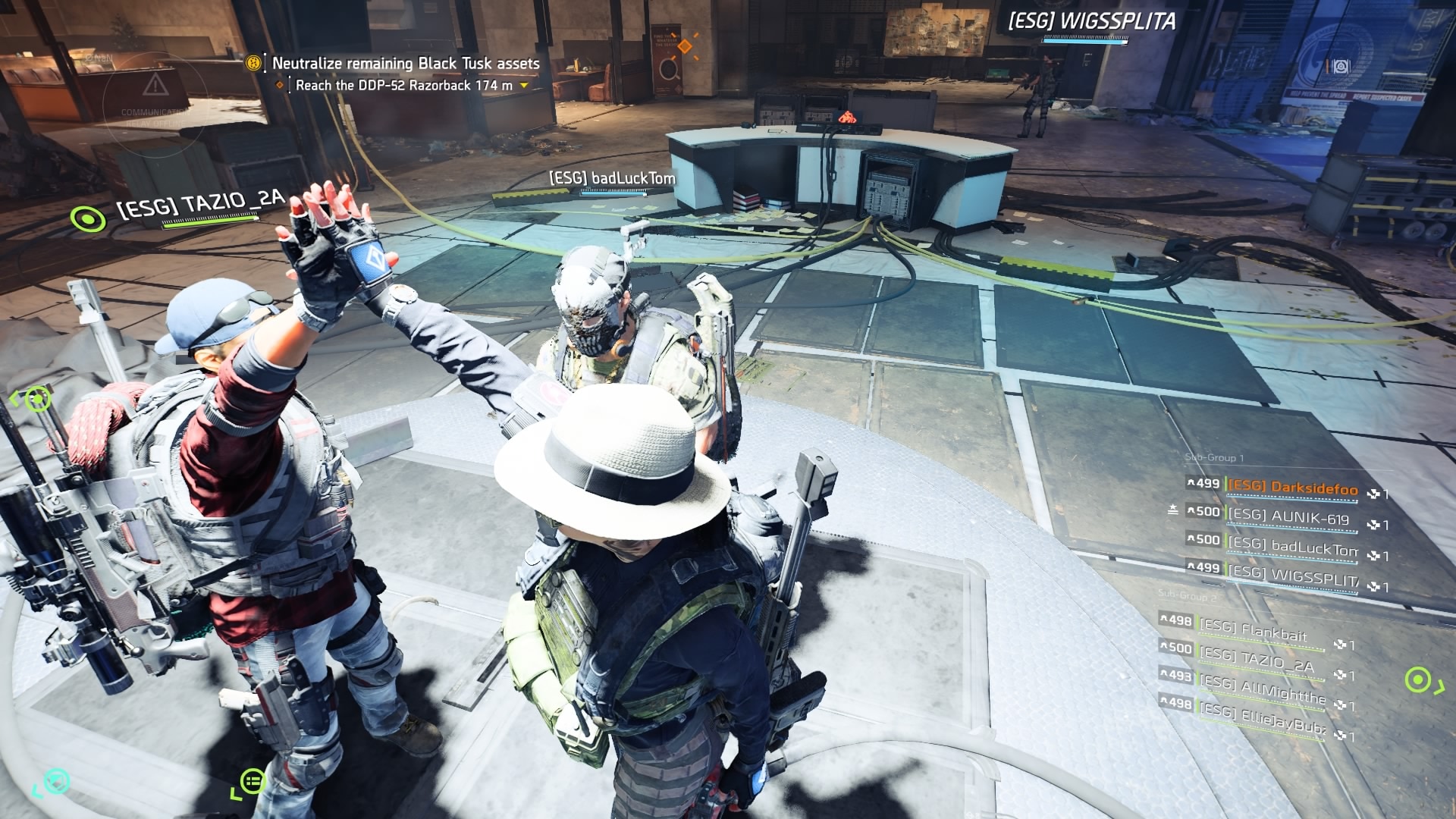 We can be found everywhere. We have such a diverse membership that you can literally find an ESG member in almost any activity. - Darksidefoos

Besides our LFG channels, I can’t tell you the number of times I have done some sort of random match making and got grouped up with a fellow member.

For agents that want to join ESG, our starting place is our Discord. From there, anyone that wants to join one of our clans can see the in-game clans’ availability and decide which clan to join. You’ll send an in-game request to join that clan. Once you’re accepted, you’ll get information on how to get your builds approved and join a raid group.

We also offer a Public LFG channel. Although it’s less active than our regular servers, you can still find a group to raid with or get some advice without committing to ESG.

We are looking forward to some of the new content that is coming, and the new Raid of course. We would love to see some of the game modes from Division 1 brought into Division 2 (maybe with some variations), specifically Survival and Underground.

Maybe a mode that combines the randomness of The Underground with the gameplay of Survival. Maybe an additional DZ, could be something offsite like DZ North, maybe in another city and much larger.

Some other things that would be useful would be a larger maximum clan size and notifications to Commanders and LTs when a member leaves the clan.

ESG is a large and diverse group of players. We have over 400 active members and 1,300 total members in our Discord server. No matter what part of the game you play, you will be able to find others here that share the same interest.

We pride ourselves on helping our members to improve themselves and succeed in their journey through the game. If you are interested we look forward to seeing you on our Discord to start your journey with ESG! 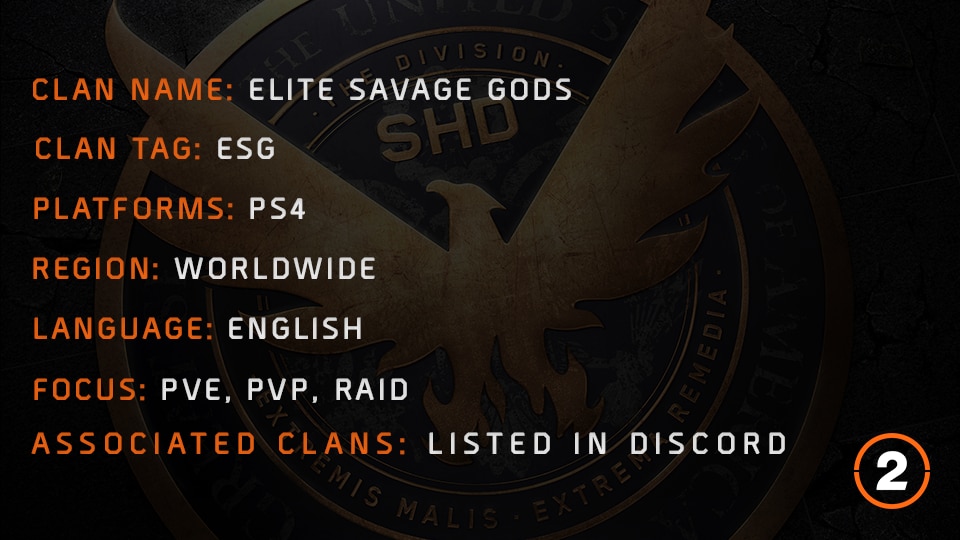 We would like to thank the founders and members of Elite Savage Gods for taking the time to share their story with us and the community. Check out their Discord if you want to get in touch, join them and explore D.C. together!

If you would like to share your Clan's story with us and with the community, let us know what your Clan has been up to using the hashtag #DivisionClanSpotlight.

You could be featured in our next Clan Spotlight!

Until next time, /The Division Community Team