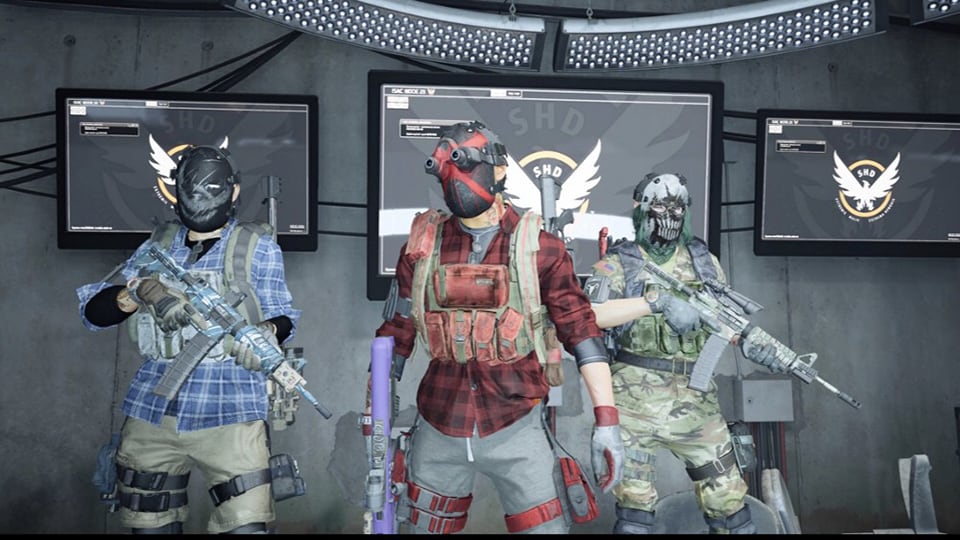 Welcome to our first Clan Spotlight article. The Division 2 brought with it many new features to the players, one of which is of course the Clans!

Through these series, we will be interviewing the founders of each featured Clan. We want to get to know our players who are behind these Clans, and to share that with the whole Division community.

In our first issue of Clan Spotlight, we interviewed the founders of Hardcore Girl Gamers [HGG] Clan. They have been active members of the community since The Division. With an interesting back story, and a long history with The Division brand, we wanted to dive deeper into the Clan with you all.

For those out there who don't know Hardcore Girl Gamers [HGG], could you introduce yourself and your Clan?

Maverick_CW: Me, personally? I'm Maverick CW, or Mav or Mavy to my friends; which I'm happy and honored to say is the vast majority of The Division community! At least I'd like to hope so. I've been a part of The Division community since I found an E3 trailer of the game on my Twitter timeline a long time ago in 2015. My Clan is the brilliant and amazing Division Hardcore Girl Gamers (or HGG for short) that consists of some of the most astounding women to be activated as proud SHD Agents!

Vikzen: My name is XxxVIKZENxxX and I am one of the four founding members of HGG.

Janey: I'm Jane, people call me Janey or Janeyo. I'm one of the four founders of HGG and I've been a Division player since launch.

Sharon: I'm Sharon, one of the four founders of HGG.

Maverick_CW: HGG started as just a couple of women that have a lot of love for a shared, favorite game, who came together in hopes of creating a "safe house", of sorts. Where they could come together without the pressures a lot of ladies in gaming have faced over the years in what has, for the most part and sadly sometimes still remains, the mainly male dominated "world" of video gaming.

Vikzen: HGG was created with the idea of putting our footprint in the Division community. It was built on the idea of bringing likeminded women together in a place where they feel comfortable having a voice, where their accomplishments in real life are celebrated as much as their in game accomplishments. HGG is a sisterhood where we empower one another, provide a space where each individual can be themselves without being concerned they will be dismissed simply because they are women. This community is a way to show everyone that women can game and play just as hard as them men in this community.

Janey: HGG was founded by four friends who got together through The Division and just thought hey, let's start a community for girl gamers who share the love of the game! While making it a special place for women to enjoy gaming and form friendships.

So, why The Division?

Sharon: The Division for some is a story about a virus that on one Black Friday almost wiped out our civilization. For others, the Division is a mathematical algorithm of talents and skills designed to be the most effective against the worst of enemies. Perhaps The Division is an escape from reality, a mental weekend getaway.

For me, The Division is a psychological mind game where my desire to survive is constantly contested by my need to loot for better gear or decipher who are friends or foes when attempting to secure my contaminated contents in the Dark Zone. The Division challenges me by both by my skill as a gamer and my intellect for problem solving and reasoning. It has been my best friend and my greatest enemy.

Vikzen: I started playing The Division and absolutely fell in love with it. I've been gaming for years, and this game stood out to me on its own; there was no other game that came close to this experience. I joined Twitter because I wanted to see what changes were being made and started to connect with other players and members of the community. The Division brought us together as a family. This game has given us a platform to give back to the community and continue to give back to charity.

It was through The Division community that many of us found and befriended others of like mind and heart. The Division, to most, if not all of us, isn't just a video game – It's a mind-set. A philosophy. The Division speaks to, and allows us to be, our inner "hero"; to that part of us that wants and needs to help, support and empower another. - Maverick_CW

Janey: I remember seeing the trailer of The Division. I don't think I've ever been so hyped or excited about a game. I've been gaming for years and for me no game comes close to The Division, it has a special place in my heart. So many positive things have happened to me because of it. I've made lots of friends, became part of a great community and recently became Star Player all thanks to The Division.

What makes your Clan different?

Maverick_CW: HGG isn't just a "Clan", it's a family. Being by, for and mainly women... It's a sisterhood. Like a female "Three Musketeers". Except that there's a LOT more than just three! lol.

Vikzen: The HGG Clan is a family built on members and supporters of our community. The Clan's membership consists of many community members who believe in our cause. We couldn't be happier to have them as part of our Clan.

Janey: HGG is not just a Clan or a community, it's a family, a sisterhood. Like Vikz says, it's built around our members and supporters. HGG Clan is active over all platforms and have its own members and ranks.

How do you envision the future of your Clan?

Vikzen: As we continue to grow, Clan wise, we will be inviting more supporters and new members to join. Our priority is to just have fun. We're not interested in having to be that number one spot, or pushing members to play more just to be on top. It's about quality and fun for us.

Janey: I would say our main goal is to grow. Of course it would be amazing if we could fill every slot over all platforms, but like Vikz said, it's not about having the top Clan spot or pushing members. It's about getting together and having fun.

Maverick_CW: Hopefully the future of HGG is a long and bright one! The base goal of HGG will most likely remain the same for as long as it continues – that being a safe and supportive environment for female gamers. As a whole, I feel confident that HGG has a positive relation to the various, many other Clans within The Division community. One such Clan, specifically and off the top of my head, being Sherpa Co. Gaming.

Are there any Clan moments in The Division 2 that you would like to share with us and with the community?

HGG: There are a couple of special moments for HGG, this picture (below) defines everything that HGG is about. It's not The Division 2 but it was a farewell to The Division, a thank you for helping create HGG. We thought we'd share this with you as it means a lot to us.

Maverick_CW: One of the proudest moments that comes first to mind is the extraordinary combined efforts that brought about the phenomenal Heart2Heart charity drive HGG conducted a few months back. Not just HGG, but the mass of The Division community stepped forward with incredible results to help benefit a truly worthy cause! Proving that no matter how many "divisions" there are within The Division... When it comes to helping others, The Division community can always be counted on to stand tall and as one, unified force.

If someone wants to join you and explore D.C. with you, where can they find you?

Maverick_CW: With the addition of Clans in The Division 2, finding HGG is as simple as searching for us in the in-game Clan menu as "Division HGG". Also, another, and perhaps easier way of contacting HGG is through Twitter @Division_HGG.

Janey: We enjoy nothing more than exploring D.C. with members and supporters. As Mav says, we are active on Twitter as a community and active on all platforms: PC, PS4 and Xbox One.

Janey: Just how much we appreciate everybody within The Division community. We've received nothing but positivity from everyone. It means a lot to us as women and as gamers. So thank you and we can't wait to see what the future holds for HGG.

Janey: I think you've incorporated Clans brilliantly into The Division 2, but I would like to see more rewards, achievements and maybe a shared stash space for Clan members to trade.

A final thank you to all the founders and members of Hardcore Girl Gamers [HGG] for being an awesome part of this amazing community. Check out their Twitter account if you want to join them and explore D.C. together!

If you'd like to share your Clan's story with us and with the community, let us know what your Clan has been up to using the hashtag #DivisionClanSpotlight. You might be featured in our next Clan Spotlight!