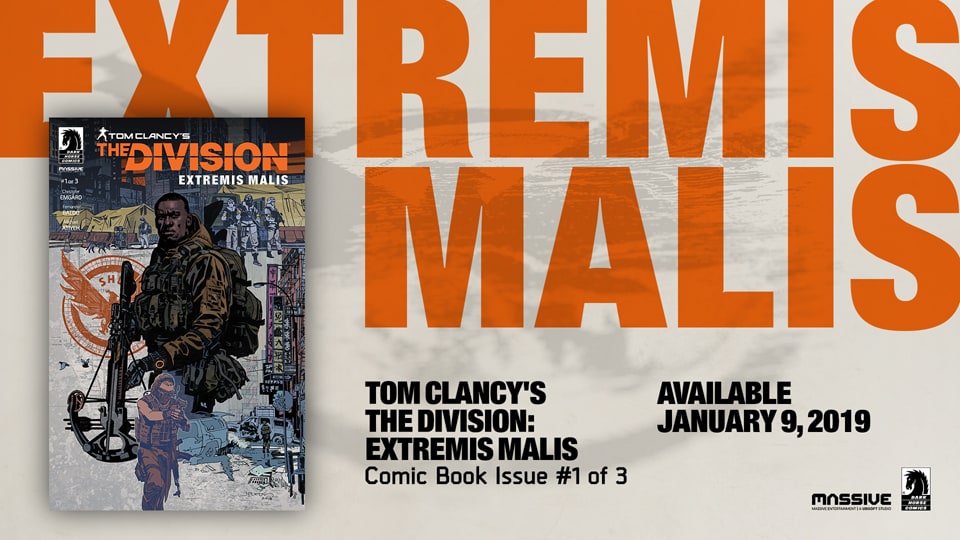 Months after a bioweapon attack devastated New York City, the Division agents are the last hope of a United States struggling to hold itself together. During a mission gone horribly wrong, Division Agent Caleb Dunne's partner is gruesomely killed and Dunne vows to track down the mysterious woman responsible. As he gathers clues to her whereabouts, he uncovers a grave threat to a nation already on the brink of total collapse.

The first issue of Tom Clancy's The Division: Extremis Malis goes on sale January 9, 2019, and is available for pre-order at your local comic shop.

Dark Horse and Ubisoft will also release The World of Tom Clancy's The Division on March 19, 2019. This hardcover book is the ultimate guide to understanding the crisis that struck the cities of New York and Washington DC after the green poison pandemic. Packed with incisive lore and detailed art, the book explores the Division's organization, its agents, their weapons and technology, and much more.

Led by Massive Entertainment in collaboration with seven other studios around the world*, Tom Clancy's The Division 2 is the next evolution in the open-world online shooter RPG genre that the first game helped establish. Set seven months after a deadly virus was released in New York City, Tom Clancy's The Division 2 will bring players into a fractured and collapsing Washington D.C. The game will be released on March 15th, 2019.

We sat down with the author Christofer Emgård and asked some questions about his relation to Tom Clancy's The Division.

What is your personal history with The Division, the game?

I worked with the original game concept team at Massive for several years as the Lead Writer. Our mandate was to create a "Tom Clancy RPG" and we explored different ideas about what that could be. When discussing the setting, I remember someone asking "How about a pandemic?", and then someone else saying "Yeah, but what if it's MID-pandemic, rather than POST-pandemic?", and then things sort of took off from there - the Directive 51 contingency plan, the Division as a unit, and everything else.

What was the most exciting thing about writing a story set within the world of The Division?

I'm fascinated with the setting in that it's still sort of mid-crisis and not post-apocalyptic. That allows for a lot of interesting "what if's" with regards to world building and character development. And there's also the Division Agents themselves – they are extremely skilled and well-trained, and given a carte blanche to do whatever is needed to protect and restore society. What does that kind of responsibility do to a person? That's interesting to explore.

Without spoiling specifics, what can fans of The Division look forward to seeing in Extremis Malis?

It'll be a first glimpse of how the Division world has moved on from the first game. After a long and devastating winter, what is left of US society? How is the Division itself faring? You'll also get to visit locations outside of NYC, while exploring the minds of a diverse group of Division Agents.

You have worked on video game comics before. What is different when writing a comic related to a video game compared to about other subjects?

When writing for an existing franchise you must take care to respect the style and tone of that franchise, and you also want to ensure that whatever you add to it fits with the already established world. What's been so enjoyable about writing "Extremis Malis" is that I've been allowed to explore things not shown in the games themselves. But where I would only have myself as the ultimate judge of what is OK and what isn't when I write a story of my own, I have to make sure that the game team is onboard with whatever I put into a game-connected story. And that is probably the biggest difference.

You worked with Massive Entertainment as narrative designer on the classic RTS game World in Conflict back in the day! How does it feel to be working with your alma mater again?

I still have several close friends working at the studio, some of whom started on the very same day I did more than a decade ago, and getting to work with them again has been a true joy. I left Massive in the early days of the Division and so it has also been a great pleasure to come back and help further develop and evolve the world I once had a part in creating.