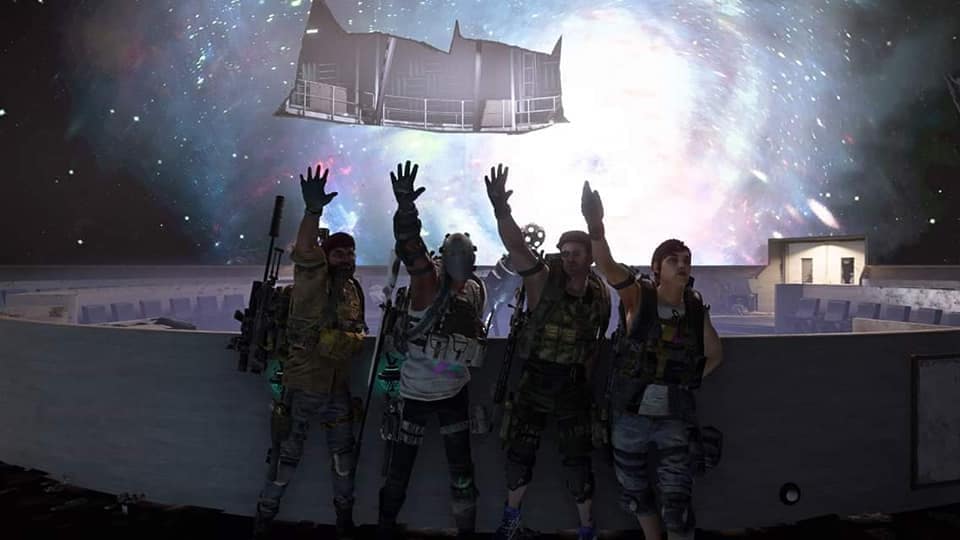 Welcome to our third Clan Spotlight feature, we have a great clan to introduce to you: The Second Wave [TSW], founded by GCRock.

This clan is big, and consists of a multitude of branches that span across all three platforms. They all work together as a family to help their community achieve their goals.

Be it to collect masks, complete the Raid, or simply take a stroll down the road to take over some control points.

So, without further ado, let us delve deeper into this family of Agents to see how they make it work.

For people out there who do not know The Second Wave [TSW], can you introduce yourselves and your clan?

[TSW] is a large gaming community created by founder GCRock and is run together with LadyM, Paul264, Penny and Fifteens.

GCRock: I am GCROCK, a video games content creator on YouTube. I am also the founder of the clan The Second Wave.

LadyM: Head Admin of our Discord community and former Clan Admin. Her work with the clan has been amazing.

Paul264: Discord admin; he was around before I started all of this.

Penny: Works a lot with me and helps me with the channel & raids. Also a Discord Admin.

Fifteens: Our Clan admin, he has supported LadyM immensely with the growth of the clan.

Can you share the story of how The Second Wave [TSW], began?

GCRock: We created [TSW] in anticipation of The Division 2. We heard that clans were going to be a thing, so we knew we had to make a plan. At first, I did not feel much for it; my experience with clans in the past has been competing and pushing to earn the most XP and rewards. My channel is about helping the community. When we started to plan how we could create a clan that did that, I got very excited by it.

I was having a chat with Paul264 and a few others to decide the name of the clan. Paul said "The Second Wave" and I loved it. - GCRock

Paul264 When we started out on The Division, we were PS4 only. We were a group of less than 10 players that just loved the game. It was around the time when global events and commendations released that we became determined to get the happy and piggy mask from the Global Assault Event. We spent most of the week trying various methods and refining our approach until we were close to completing it.

However, time was against us due to work commitments, and only one group got the happy mask. Next time we would make sure everyone got it. When the event started the second time, we had just started streaming for fun on the GCrock YouTube channel, and we all got the masks on the first day. We were wearing the masks in the terminal and people saw it on stream, and people asked how we got it and could we help them. We started helping people get the happy & piggy masks.

From there on, we started to offer survival runs, flawless legendary missions and anything else we knew people might struggle with due to the lack of ability; poor build quality or the lack of a regular group to play with.

People asked quite frequently in the streams, what platform we were on; and many stated that they wished someone on their platform (XB1/PC) were doing the same. Therefore, we set up a Discord server as a place to get everyone together, and enable players to group up with each other. This also removed our limitation to PS4 only.

The Second Wave [TSW] clan has numerous members across all three platforms, how did it evolve into such a big community?

GCRock: When The Division 2 dropped, I think we had about 60 members. Knowing that the game would only allow for a clan size of 50, we made plans to ensure our clan would not be limited. We decided to make clans on other platforms because we had people in our streams who played on Xbox and PC. Soon after launch, we had a structure in place to manage two clans on the PS4 and one clan each on Xbox and PC.

The numbers on Xbox and PC started as little as four players, which was in a community of about 150 people at that time. Today our community sits at over 1500 with nearly 600 members in our clan. That is 7 clans on PS4, 4 Clans on Xbox, and 2 Clans on PC.

We treat the clan as one giant clan, and players can play with whom they like. A big part of the clan's development is down to how well the structure has been adapted through growth and lessons learned. We also have multiple options for clan mergers with clans who want to be a part of our community. LadyM, Fifteens and the whole clan team have worked miracles.

Social Media I think played a lot in how successful we have been across all platforms. It is amazing to see how the normal "platform wars" among other groups don't exist here because we're all here for the love of the game. - LadyM

Fifteens: Members seem to like the relaxed and non-toxic attitude.

Can you tell us a bit, about what inspired The Division 2 24h Charity Stream?

GCRock: We started doing charity streams early and I decided that I would always do two a year. Every charity stream so far has been 24 hours long. Our last one was earlier this year when we did to celebrate that Penny was number one in the world for completed control points.

LadyM: Acceptance makes us different. We do not care where you are from, what language you speak, or if you have a physical limitation. We do not accept people being intolerant of others. This is so important when you have as many people as we do.

Paul264: We try to keep everything we do as family friendly as possible. We have a comprehensive set of guidelines that we use to present our values, and will accept anyone no matter what their abilities or background is.

Penny: We do not judge on what a person can or cannot do. Inclusion is our priority. Everyone has a right to enjoy gaming and feel treated as equal.

GCRock: We are currently pushing out ideas to help more people get involved with what we do. Teams are forming across all three platforms to help members with the raid, new stream team members join our clan channel to stream more content, and our clan and community is growing every day. We want to keep growing, and we want to keep learning in order to make the community/clan an even better place to be.

Fifteens: Planning to take over the world.

GCRock: There have been a few! I will not forget the excitement for the launch of The Division 2.

We created the first clan for [TSW] in the 24h stream, and I went on to complete the story and enter World Tier 1 in , the longest I have ever streamed.

Another moment was the for charity where we raised over £1000 for Autism Together, I spoke about this a bit earlier.

There have been plenty of moments on our clan channel too, one recently was when the sound glitched out, so the stream team had fun and

LadyM: A favourite moment in Division 2 is hard to pick. For me, it was less of a Division 2 moment as it was the moment I was playing and realized that many of my friends in this game are actually family. I have never personally met one of these people, but they are family to me.

Our first completion on the raid. It was incredible. The raid was such solid content, some days it felt almost impossible to complete. However, with the group and the friendships we had all built - we got through it. - Penny

GCRock: My favourite clan activities are helping members through the raid and raid speed runs. I love difficult content and it has been a great experience learning Dark Hours and getting to where we are today. I get to do it with friends too and it is just fun. One of the benefits of having many clans with a one-clan mentality is that there are groups of players doing all sorts, so you will always have someone to link up with.

LadyM: Challenging each other! It is all in good fun but logging in with someone and running a mission to compare stats at the end is hilarious. We often poke little jokes at each other and just have a general good laugh.

GCRock: Survival was my favourite part of The Division; I would love to see Survival on The Division 2. I know it must be different, but it can work, even if you go more towards Battle Royale.

LadyM: One thing I would love to do with my clan is meet them. This community has been by my side through some tough times. To be able to meet the ones who helped, and continue to help me, and tell them just how much I appreciate them; that would be a life goal.

Paul264: I ranked PvP conflict/domination modes where you can match make against other teams in your own clan, or search for a clan name to play against.

Penny: As a whole 50? Some kind of Battle Royale or TDM would be sick. Wouldn't mind 50 manning a control point.

Fifteens Clan BBQ. We can shoot our own deer if needed.

LadyM: Either the Discord, or Facebook. As I consider it a personal goal to make people feel welcome as soon as I can.

Paul264: If people want to join us in D.C., find us on Discord and YouTube.

Penny: Hit any of us up on the Discord. If we are around and available, we are happy to run whatever.

GCRock: If anyone from the clan or our community is reading this, I just want to say thank you for the support shown for what we are building. If this is the first time, you have heard of us, please do check us out. We truly love The Division 2 and cannot wait for what lies ahead in future content.

LadyM: If I could share one thing to the entire Division community, it would simply be to enjoy the game. So often people take things too seriously, it is important to be able to unwind.

Penny: Did you know I am number 1 in the world for control points on PS4?

Fifteens: Be kind to each other and enjoy the game.

Thank you to the founder and members of The Second Wave [TSW]. Check out their Discord if you want to join them and explore D.C. together! You can also catch many of the members streaming on their YouTube channel.

If you would like to share your Clan's story with us and with the community, let us know what your Clan has been up to using the hashtag #DivisionClanSpotlight. You might be featured in our next Clan Spotlight!