This Week in The Division 2 – September 25

The Division 2: Warlords of New York’s Season 3 – Concealed Agenda has begun, agents! The next 12 weeks are filled with new targets and events, as well as some returning events that might look a bit different this time around.

The first target in the hunt for Bardon Schaeffer has been revealed. Marley “Shade” Yarrow is a double defector, first going rogue to join forces with James Dragov, then joining the Black Tusk shortly after his death.

A former parole officer, Shade is deeply sympathetic to the Rikers and well established within their ranks, two factors that make her highly dangerous.

The Shade League has also begun, with Hard difficulty time trials in The Tombs, Liberty Island, and Wall Street, with a Challenging time trial on the Stranded Tanker. There are also challenges for enemies bled and Riker Elite eliminations.

League challenges will reset on September 29, giving you a new chance to earn all the available rewards.

You can earn the Shade patch at Tier 1, an Exotic Cache at Tier 9, and the Stake backpack trophy at Tier 10, along with other gear and material caches.

Season 3 also brings a new Global Event: SHD Exposed, a fast-paced, CQC-heavy event that will have you running around the battlefield, eliminating every enemy in sight. As well as a new 100 season levels to earn with Exotic, gear, and cache rewards throughout – plus a new Season Pass for even more rewards along the way! 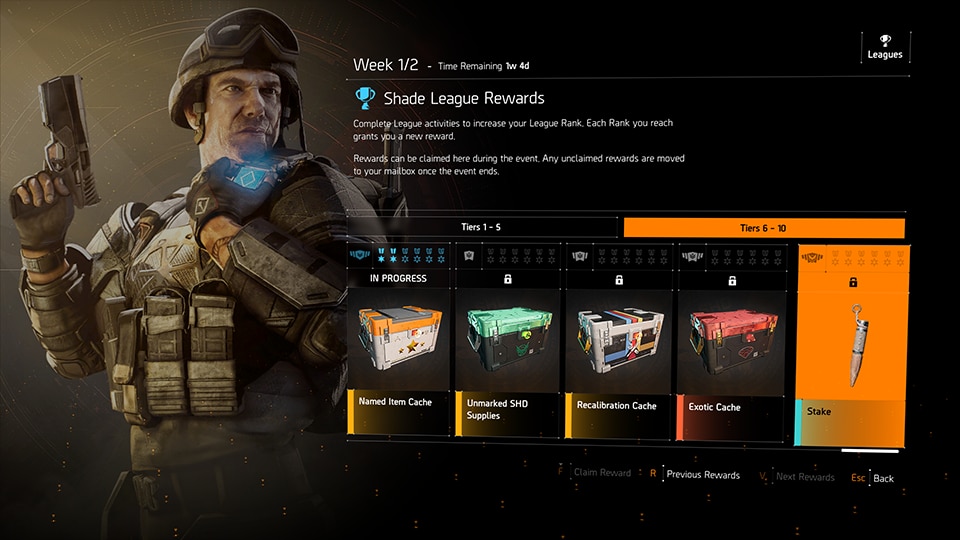 The Division 2 will be free to play from September 24 to September 27. You can play as much of the base game as you want which includes levels 1-30, World Tiers 1-5, both Raids, 3 installments of Episodic content, and more.

Any progress you make during the free weekend will be carried over, should you decide to purchase the full game. To all the new agents out there, welcome to The Division!

Grab some friends and hang out in D.C. for the weekend, or make some new ones when you join our official Discord server, where we have text and voice channels specifically for group-finding at all levels.

Title Update 11 was released on September 22 and brought with it a plethora of improvements which can be read in detail in our TU11 Patch Notes.

The Summit will put you or your squad against 100 floors of varying enemy factions, objectives, and threats. The difficulty will increase as you ascend, climbing from Normal at the bottom to Legendary at the top!

Changes have also come to Rainbow Loot. Now in TU11, the first attribute of a piece of gear is heavily weighted to match the same color as the item’s Core attribute. Though getting all 3 different colored attributes is still possible – it should happen significantly less often after the update.

Additionally, all mod slots on gear have been converted to generic mod slots. These new slots allow for any type of gear mod, with the color of the slot no longer mattering. Gear that had recalibrated its mod slot has now been refunded that recalibration point.

Some exciting changes are also coming to Global Events throughout Season 3. Familiar GE’s like Reanimated, Polarity Switch, and Guardians have been revamped to reduce the negative gameplay modifiers, making your agent even more powerful.

Such changes include un-matched polarities no longer shocking you, now only removing the damage buff – but the damage buff is now even stronger (Polarity Switch). Or Guardian kills allowing you to penetrate Guardian protection as well as the ability to rob enemies of their protection (Guardians).

Coming soon, Title Update 11.1 will deliver further improvements to The Division 2, especially to The Summit, where we plan on implementing additional changes and tweaks based on your feedback.

We conducted a maintenance on September 24 to address an issue that prevented players from acquiring the exotic chest, Ridgeway’s Pride. As well as fixing a mission progression blocker on the Stranded Tanker mission.

The Year 1 Pass was mistakenly granted to some players on PC. As this was a mistake on our end, we will not be revoking ownership of the Year 1 Pass to those affected. The issue has since been resolved.

The Apparel and Legacy caches changed their respective loot pools on September 22. A different set of items will now be available from these caches, so don’t hesitate to fill out your collection!

We recently released a schedule for Kenly College’s opening and closing dates for Season 3. Check it out and make sure you snag that exotic Diamondback rifle! 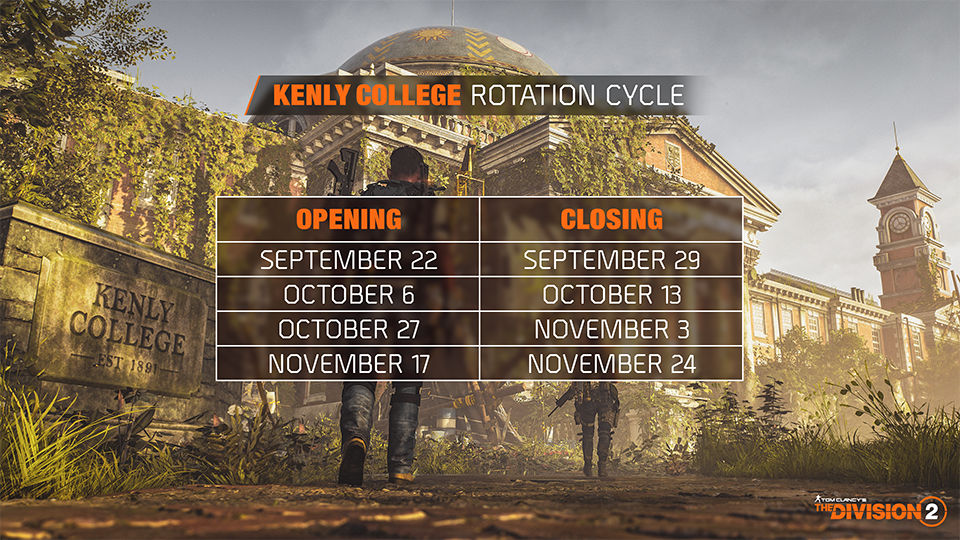