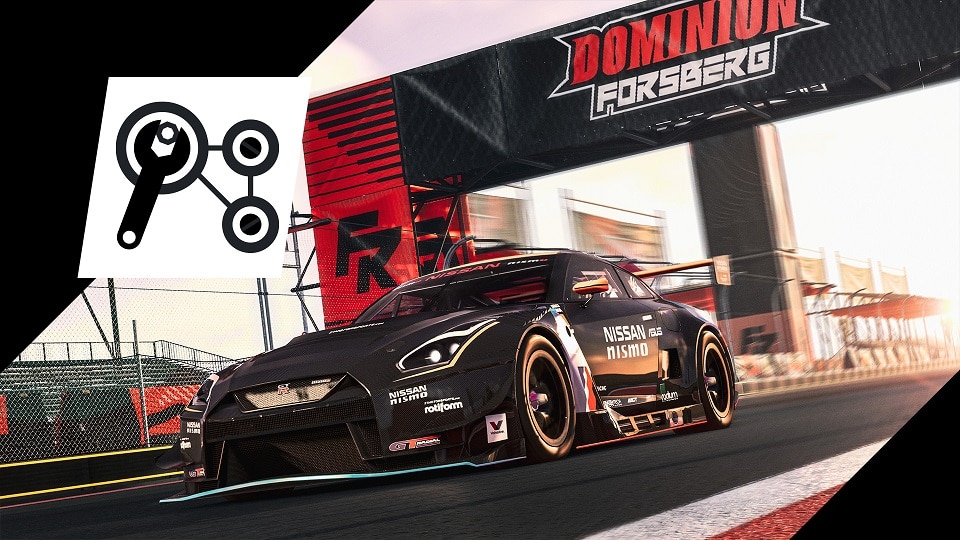 On top of the new mode and cars, Season 6 Episode 1 comes with a truckload of Quality of Life improvements. In addition to the visual improvements detailed in this article, gameplay changes are coming to the game.

Let's have a look at what our teams have been busy working on to make your experience on The Crew® 2 even better! 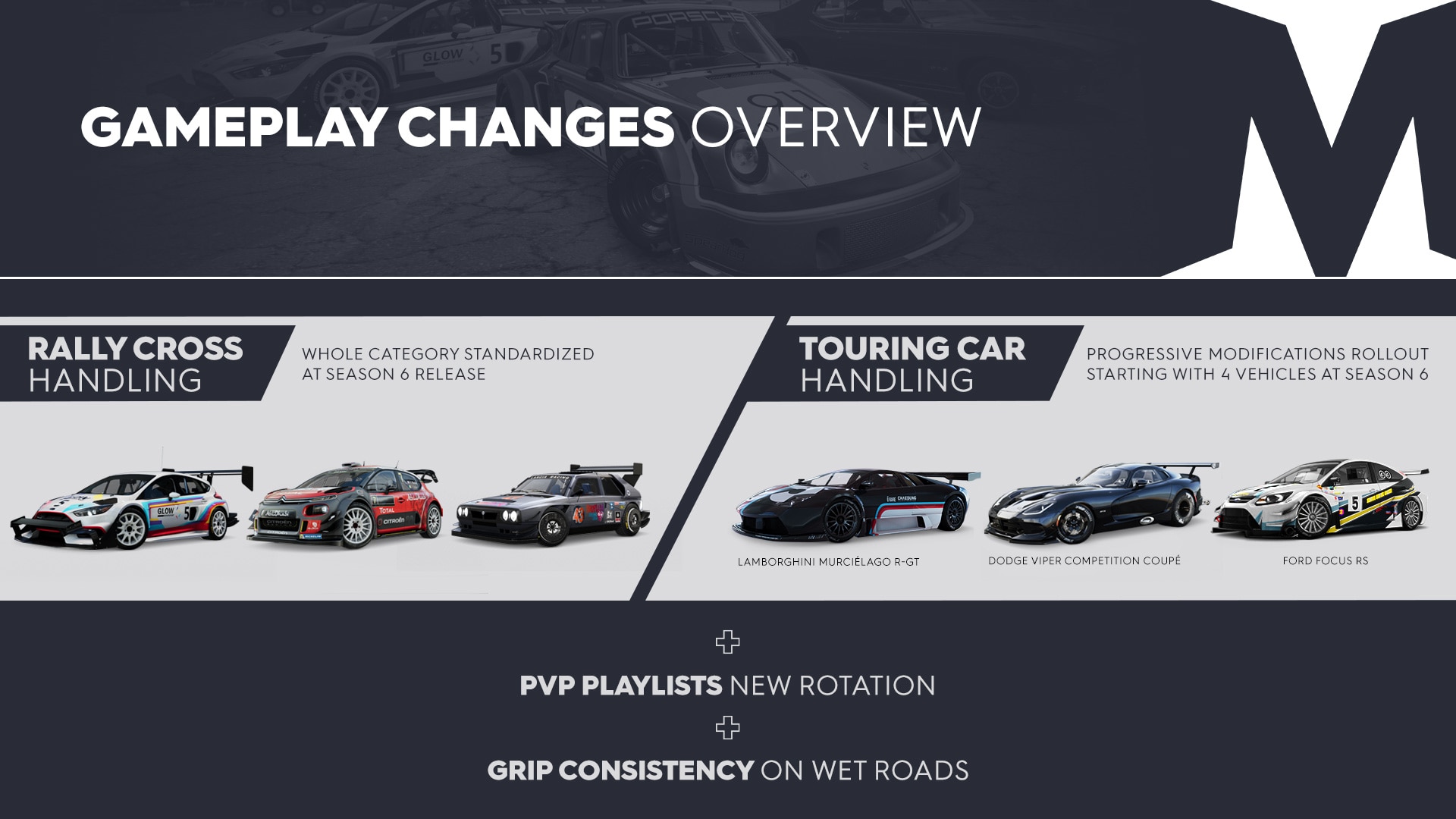 Thanks to your feedback and internal investigations, we were able to further examine the handling discrepancy between cars released before and after the Inner Drive update, both in terms of sensation and performance.

It is important for our teams to prioritize the work on this topic in order to move forward step by step according to your feedback, ensuring the best possible outcome. As the Rallycross and Touring Car categories are quite popular and particularly impacted by this discrepancy, we have chosen to focus on them first.

The Rallycross category was the first to undergo changes, already initiated at the release of Season 5 in March.

First off, our teams tweaked the existing inertia on the responsiveness of the old vehicles to match the new ones. The idea here is to offer a more responsive driving experience with a better sense of control. Those changes are also aimed at having a better consistency across the vehicle category when it comes to the reaction in slippery and bumpy situations on the road.

Other features that were changed included adding slightly more grip and stiffening the suspension/anti-roll bars. All Rallycross vehicles should still slide, but you should be able to keep control more easily.

The Aero attribute that determines the behavior of the vehicle at high speed has also been updated. As a result, at max level, your old Rallycross vehicles should compete better with the new ones in terms of pure performance.

You could experience the handling update of these 3 Rallycross vehicles throughout Season 5:

Following your positive feedback, we will now deploy the new handling to the rest of the Rallycross vehicles that were not updated:

Thanks to your feedback, we are aware that this handling discrepancy between old and new vehicles is also present in Touring Cars.

That is why we would like to follow up on what has been achieved in updating the vehicles in this category.

During Season 5, you were able to experience it behind the wheel of the Koenigsegg CCGT.

With Season 6, 4 vehicles are benefitting from this updated handling so that you can share your feedback with us:

Just like we did for the Rallycross category, if these changes meet your expectations, we will roll out this handling to all Touring Car vehicles. Your feedback matters, so let us know what you think!

In order to bring more consistency to the gameplay, Season 6 will also bring changes regarding grip in wet conditions. 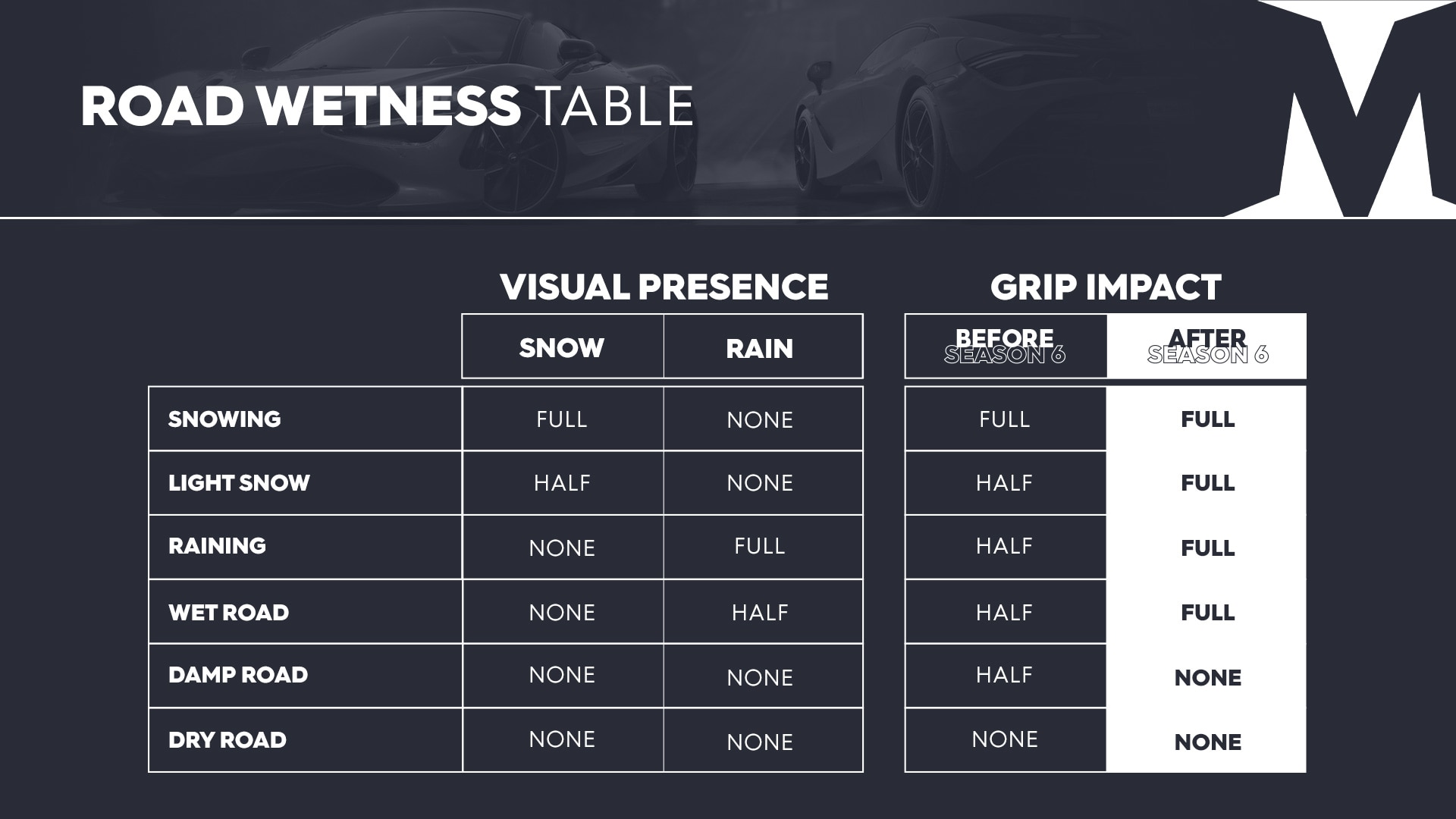 The grip modifiers have been streamlined and changed to reflect the visual feedback. The grip loss is actually quite minimal in the game, but it wasn't consistent across all weather conditions. This has now been reviewed. We do not expect any drastic impact in terms of car behavior following this change. 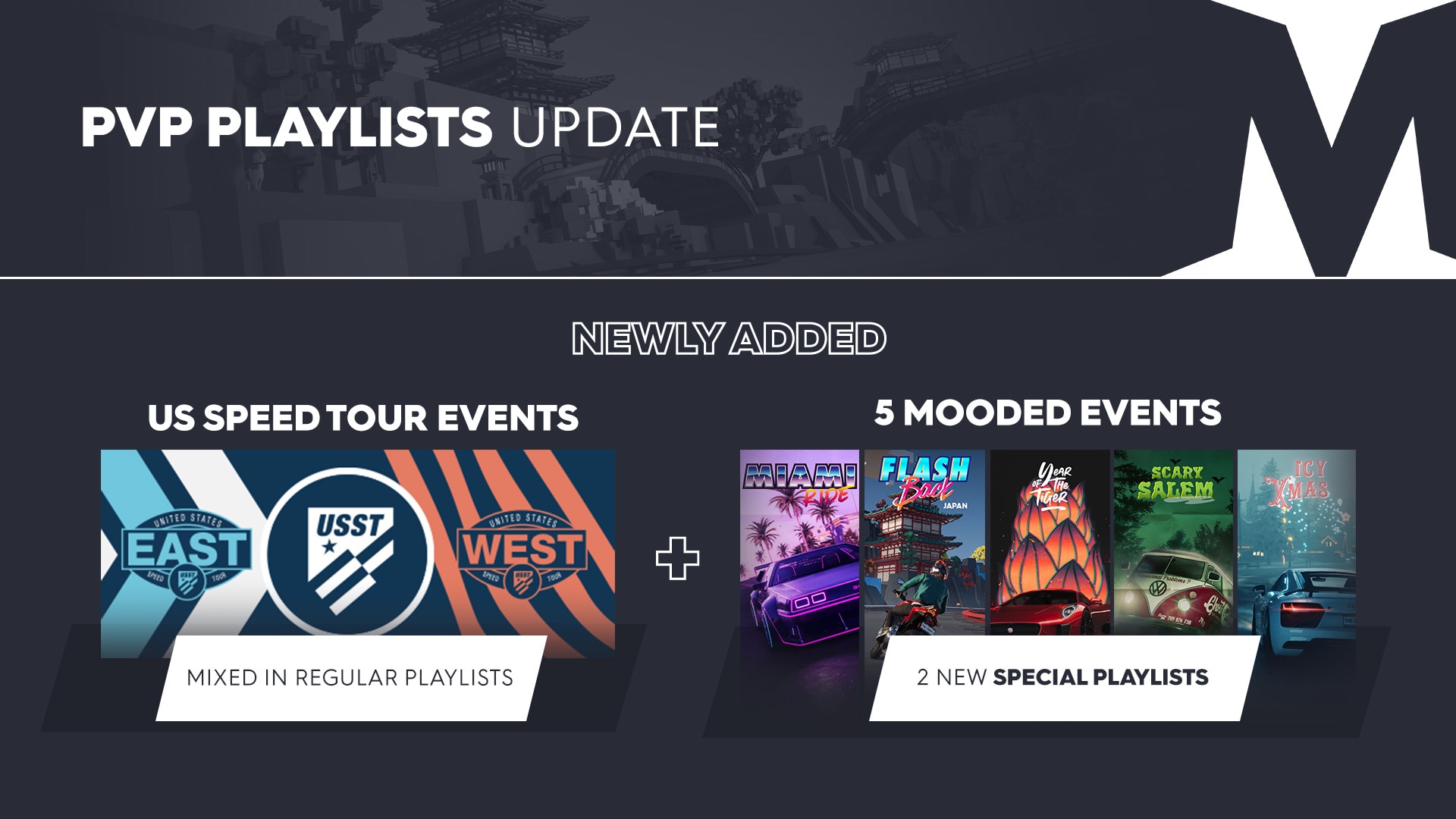 With this update, we are also including USST events to the regular playlists and we included mooded / themed events to two new special playlists for you to enjoy. We know that many of you like to race with your friends and we felt it was high time we updated this mode with what we have added to the game during the last few seasons!

With S6E1: Dominion Forsberg, many drift races have been added to the game. Our level design team, in charge of creating the Playgrounds, made sure to create tracks enjoyable to all levels of competition. The tracks are very wide and try to offer as much visibility and room for anticipation. We know that the Drift mode is often considered challenging by many of our players, which is why we changed some rules specific to this type of event: