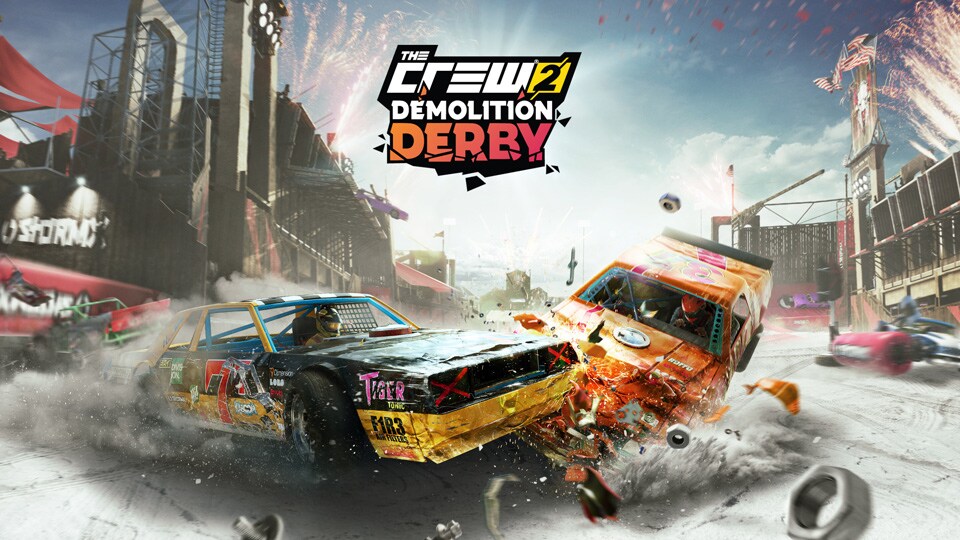 Demolition Derby crashes into The Crew® 2 on December 5!

The Crew® 2 Demolition Derby is the second free update brought to Ubisoft’s open world motorsports game, and will be available to all The Crew® 2 players on December 5.

You can check out the trailer below:

In a cloud of smoke and a cacophony of grinding gears, Demolition Derby is crashing into the Freestyle Family to bring brand new, unique gameplay to Motornation. Get behind the wheel (and roll bars) of 100% destructible vehicles, in two exclusive spots that are home to the discipline’s 8 whacky events.

In the heart of the Bonneville Salt Flats, a brand new arena has been specifically designed to host this chaos. Once unleashed in this obstacle-laced circus, players have but one goal: destroying their opponents’ vehicles while keeping their own in (almost) one piece. No holds are barred, and to spice the challenge up even further bonuses will occasionally appear across the arena, rewarding the fastest to reach them.

Other Demolition Derby events will take players racing at breakneck speed around a new circuit, built in the heart of the Tucson aircraft cemetery. Battle for first place and take care not to be shoved off the track!

A total of fourteen new vehicles will be coming to The Crew® 2 with the Demolition Derby update. We’d like to unveil the first six for you here, starting with four Fender Demolition Derby cars available to earn or purchase with in-game credits from December 5:

The update is also the opportunity for us to roll out the December Vehicle Drop, which includes additions to the Demolition Derby and Air Race disciplines. The following two vehicles will be added for free for Season Pass holders on December 5, and for all other players on December 12:

The eight remaining vehicles will be revealed closer to the update’s launch, and include new Icon Level rewards.

EVENTS & SKILLS – Like our first update in September, The Crew® 2 Demolition Derby will also be adding brand new events to existing disciplines, namely Drift, Alpha Grand Prix and Rally Cross. You can also get ready to experience the latest episode of the LIVE Xtrem Series: Holiday Special, as well as 10 new skills in free drive.

LIVE CONTRACTS – The LIVE Bus is now up and running in every HQ, offering players Daily Contracts with Crew Credit rewards. These contracts are random and different for each player, and can be based in any in-game activity: events, skills, photo ops, treasure hunts, freestyle, roaming…

Players receive one contract per day, as well as one reroll. There is no time-limit and uncompleted contracts will appear the following day, along with the new daily contract, up to a maximum of three stacked contracts.

PVP – Last but certainly not least, The Crew® 2 Demolition Derby is bringing PvP to Motornation! You can find out all about it HERE in our dedicated article.

We can’t wait for you to get hands-on with everything this update has to offer, gearheads! Get ready for The Crew® 2 Demolition Derby on December 5, and tune in for a first look at all new content a day early in our livestream on December 4.