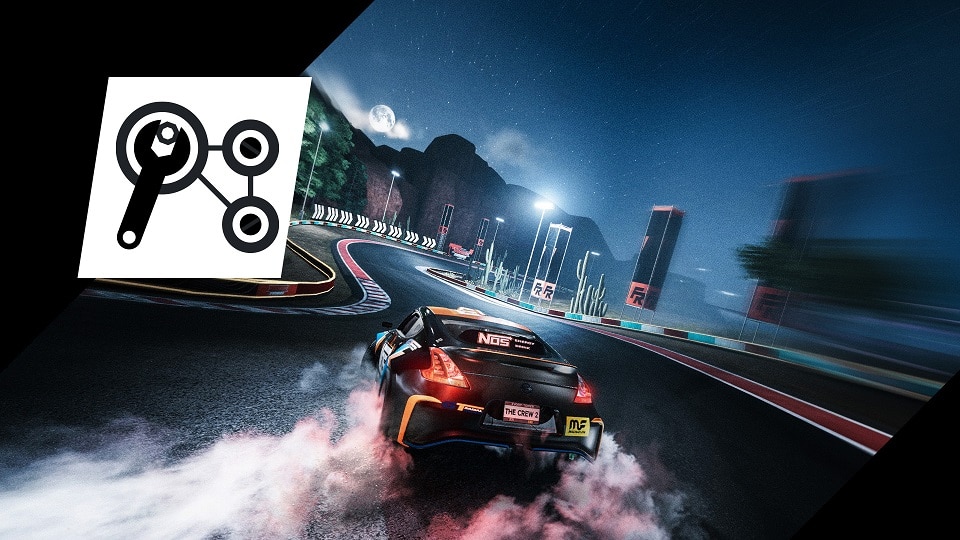 With the release of Season 6 Episode 1: Dominion Forsberg, The Crew® 2 will feature many changes and improvements and we wanted to take a moment to break-down what is coming to the game.

Giving full visibility and sharing as much information as possible to the community is really important to us. By doing so, we also hope that you will be able to grasp and appreciate the hard work of our teams. 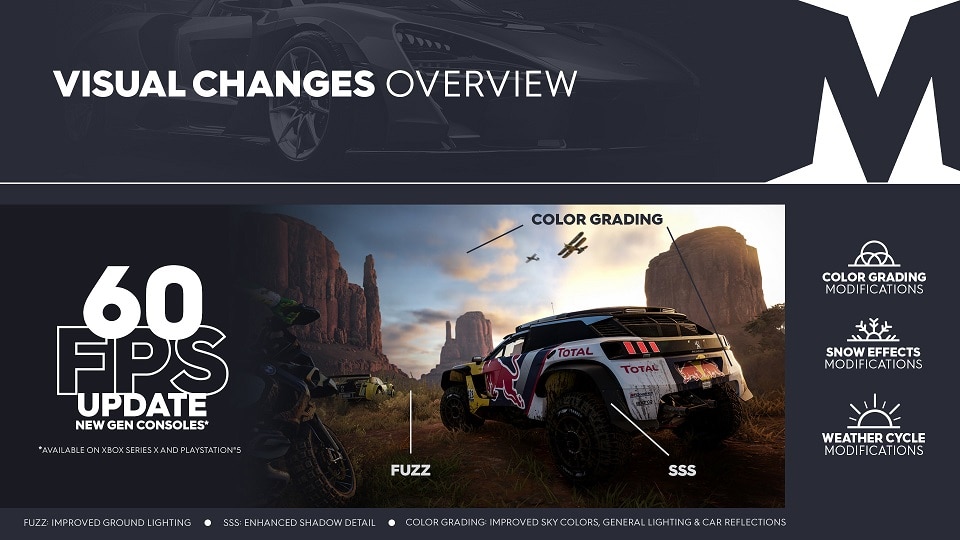 In March and during the Year 5 presentation video, we expressed our commitment to continue bringing new content to The Crew® 2. We are also determined to improve what can be and the community has been very clear in 2021: having a 60 FPS mode appeared as one of the top requests.

We are extremely happy to confirm that the 60 FPS mode will be available on PlayStation®5 and Xbox Series X upon Season launch on July 6.

Two new modes will be available in the in-game options menu:

These new features will not be available on Xbox Series S upon Season launch, our teams are still investigating the possibility at this time. We will provide an update later this year to share the results of our investigations.

We are also investigating potential dynamic resolution improvements; we will update you once we can communicate additional details.

In addition to the 60 FPS support, the team also took the opportunity to activate a couple of extra technical features which should lead to a more pleasant visual experience. It is important to mention that those features may not have the same impact depending on your platform.

Here is the availability of those new features: 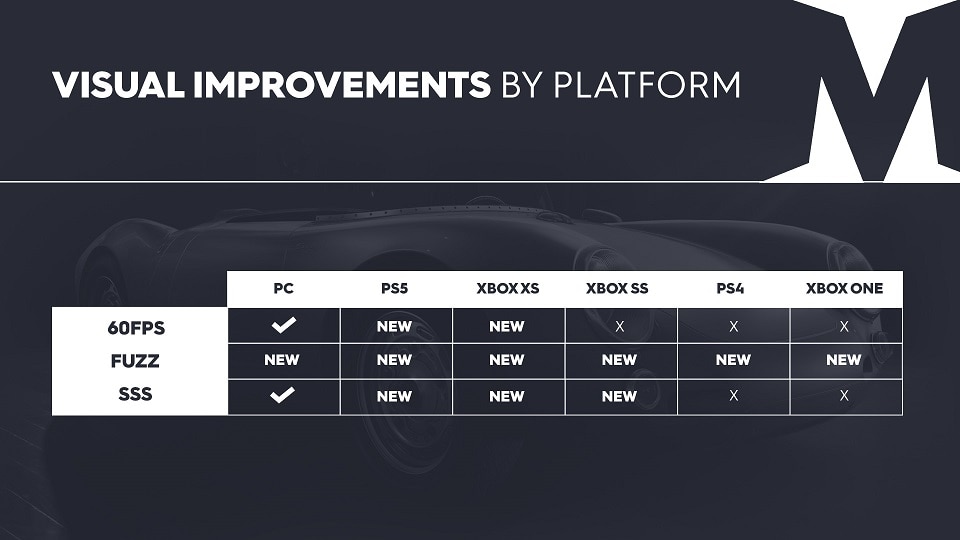 Fuzz: What does it do?

The new Fuzz feature aims at improving the lighting simulation of “fluffy” material such as grass, branches, or small bushes in the distance. In The Crew® 2, this technology is mainly going to have an impact on the lighting of the terrain.

As you may have guessed, this technique helps improving the in-game shadows by using the information available on your screen (the player camera).

Techs such as SSAO or Screen Space Reflections (SSR) work in a similar way: they calculate the light emitted by a pixel.

SSS uses the same principle but for shadows and identifies if there is there something in-between the light source and any given pixel.

In The Crew® 2, the shadows are already simulated by the cascaded shadow map tech (shadow calculated from the sunlight). Thanks to the SSS, you should have more detailed shadows as any object can now project a shadow at any distance (or close to).

These two new technical features should improve the visual quality of the game in some areas. We do hope that they will contribute to making your driving experience even more enjoyable!

The community has been vocal about the impact of the weather and the frustration it generates. Alongside the technical improvements described above, the team has decided to take a good look at the matter and to implement some drastic changes.

In The Crew® 2, the weather is working differently in the open-world compared to the so-called “Fixed-Weather” that you can enjoy in events. The changes we are implementing with Season 6 are only affecting the open-world cycle.

The original intention behind the weather cycle was to expose our players to a variety of situations to enjoy every option available under two hours of game time in the open-world.

This design choice led to a strong exposition of rainy and snowy weathers.
Many players have voiced their frustration about being unable to enjoy a sunny weather. Thus, we decided to revise the whole cycle.

The split of good, transitional, and bad weathers has been rebalanced to offer a sunnier experience overall. We also changed the duration of the whole cycle, to avoid transitioning from one weather to the next within too short a time frame. 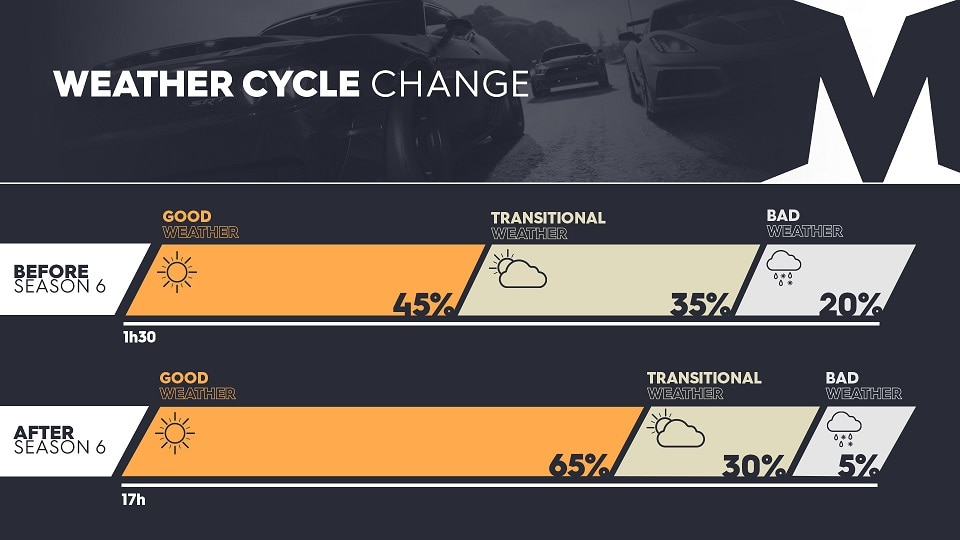 Besides the weather cycle, we also wanted to address another pain point for the community. The overabundance of snowy weather, coupled with reduced road visibility led some of our most dedicated drivers to ask to remove the snow altogether. As we consider that it would be detrimental to the overall experience to remove a feature from the game, we decided to explore the option of reducing the maximum amount of snow present on the roads and trails. By doing so, we want to continue offering a diversity of landscapes while addressing a very legitimate visibility issue.

On top of all that, we also redesigned the snow effect on cars. Again, we have heard your feedback on that specific detail and decided to look into it. Our art team did some investigation on the topic and put together a visual effect that is much more in-line with what can be observed in real-life.

As some of you have noticed, we started introducing some color changes with Season 5. As part of the visual update, the team also started implementing some tweaks to the color grading. For a more accurate description of what has been achieved and to help you appreciate the changes, we have broken them down into several sub-categories.

The main change that has been applied is linked to the sunlight. The intention of our designers was to lean towards a less yellowish light to get a little more blue - something a bit closer to what we can observe in real-life.

In addition to that, sunrises are now a bit more yellow, while sunsets feature a more orange / red tone.

As for night-time, we are leaning into more blue tones. We are moving away from the yellowish nights which can be observed under artificial (yellow) lighting in big cities.

More than the contrast itself, the team has tweaked the tone mapping. In The Crew® 2, this will result in having slightly less “flat” colors and a bit more dazzling effect.

We have not made any changes to the reflections from a technical standpoint. However, due to the changes in color grading and tone mapping, the reflections on cars should be a bit more noticeable and enjoyable overall. As it is a very subjective topic, let us know what you think about it!

To improve the scene in The Crew® 2, the team has decided to tone down the shadows on clouds. We are moving away from greyish clouds to whiter ones, which we think should improve the scenery.

As for the fog, the game inherited some technology from The Crew 1. One of them was not corresponding to what we wanted to achieve, and we decided to disable it. We replaced this fog by another technology which was already in use in The Crew® 2. Our main goal was to remove any hinderance to the gameplay while offering something always more pleasing to the eye.