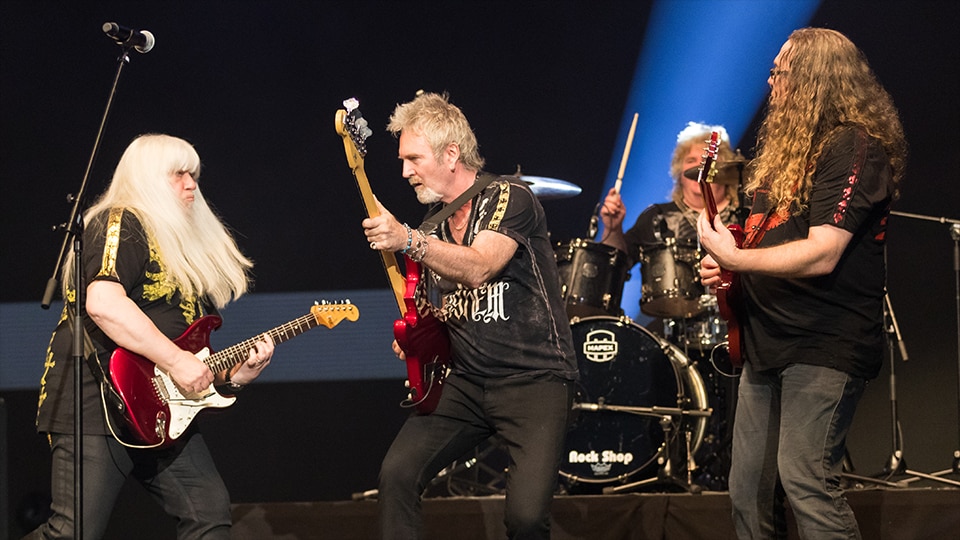 The Sweet Chaos of "Ballroom Blitz"

January 27, 1973 was a night to remember for British glam rockers The Sweet (sometimes just "Sweet") when a gig at the Grand Hall in Kilmarnock, Scotland went completely south. It was bad enough that the audience spat and screamed, drowning out the music, but when they started throwing bottles, the band had no choice but to stop halfway through their set and flee back home to London. For a band that had already made numerous TV appearances and whose smash hit single "Block Buster!" had just topped the charts, this wasn't exactly the kind of response they were expecting. So what went wrong?

Guitarist Andy Scott, Sweet's sole surviving core member, speculates, "Either they were jealous, or our eye-shadow, glitter, and wild costumes were too much for the hot-blooded men of Killie." Maybe it was the band's look, or it might have been that songwriters Mike Chapman and Nicky Chinn wrote songs in their earlier days that prematurely (and arguably unfairly) pegged Sweet as a sugar-coated pop band.

If the riot at Grand Hall wasn't terrifying enough, a second Scottish gig devolved into chaos when The Sweet played at the Apollo in Glasgow that same year. Scott recalls, "A bunch of girls grabbed [lead singer] Brian [Connolly] and me by the ankles and dragged us off stage. They started lobbing off our hair with scissors they had been hiding in their handbags." Mike Chapman had attended the gig, and left inspired to start writing the lyrics for what would become "Ballroom Blitz," cementing a whole new harder-edged sound for the band, and a far cry from their lighter, poppier "Funny, Funny" days. According to Scott, the song "tells the story of that mad night at the old Apollo, the flashing lights and jumping atmosphere. If it wasn’t for that raucous gig in Glasgow, it might never have been written." But he also admits, “'Ballroom Blitz' could have been inspired by all of our Scots gigs.”

Peaking at number 5 on the US Billboard Hot 100, "Ballroom Blitz" left a long-lasting legacy over the decades. It got a punk makeover when The Damned covered it in 1979, and has appeared on several film soundtracks, most notably Wayne's World and the 2016 DC superhero film Suicide Squad (not to mention the Ubisoft game Shaun White Snowboarding).

Next time one of your local gigs turns into a disaster, remember – even the worst live shows can have unexpectedly positive outcomes…like a top-ten hit!