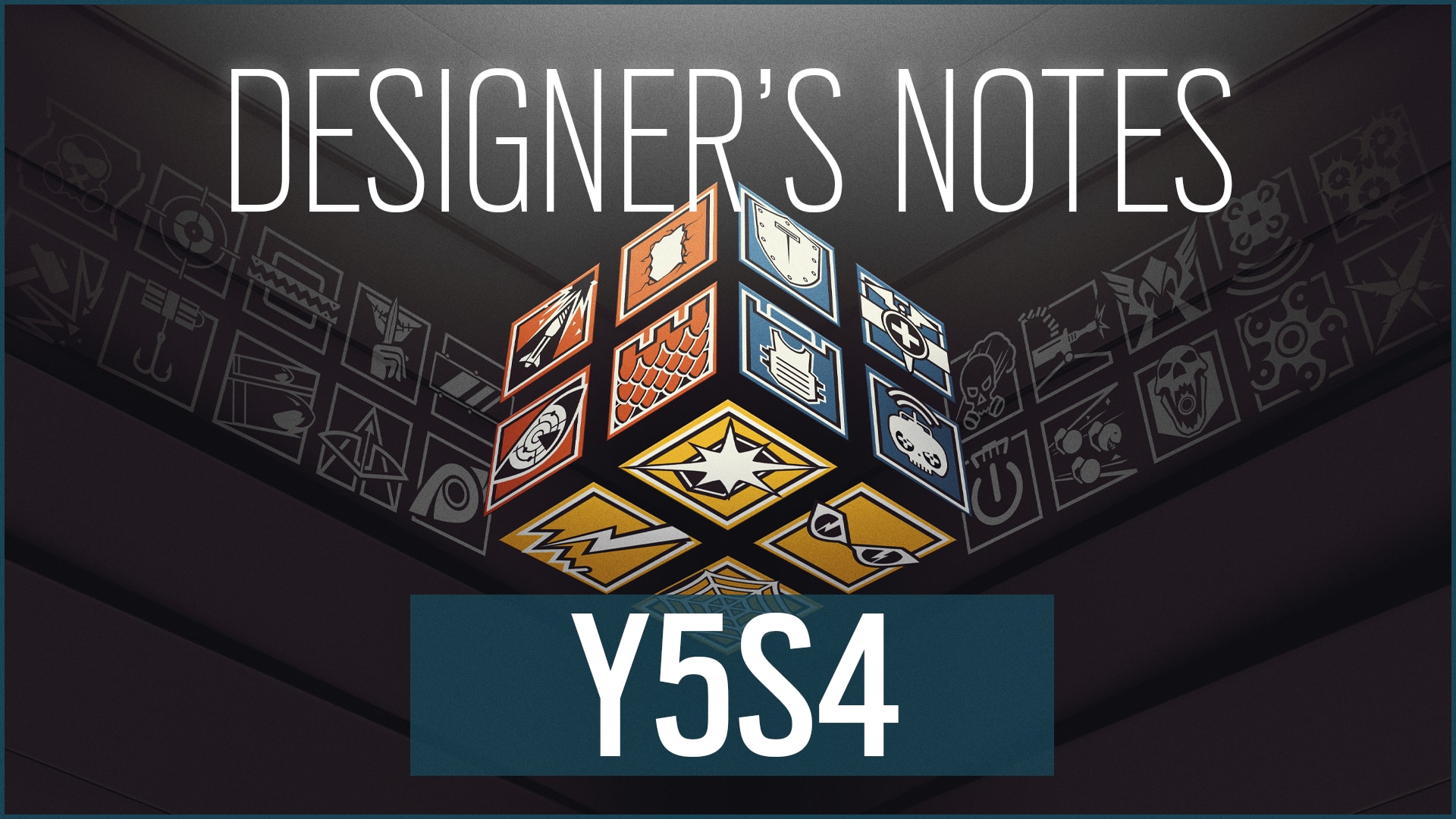 We have taken good note of the Pro and Community feedback. We recognize that the current meta revolving around heavy utility in defense is causing issues to the health of the game.

This is a global issue, tied to multiple Operators that will require several changes. As a result, we are taking a few important steps to try to address it.

Catcher Operators are able to deny Attackers utility (projectiles). The combination of several Defenders of this type within a same line-up is putting a heavy strain on the Attacking side.

We are trying to lower the amount of projectiles denied by these Operators within a single round.

Currently, those catcher Operators can deny five to six projectile per round. We are aiming for something closer to three to four per Operator.

Changes to catchers should mechanically affect bulletproof gadgets. That being said, we will continue to keep a close eye on those operators.

We will react accordingly and tweak some of them if we deem it necessary. (Melusi and Goyo in particular).

We reshuffled the distribution of quite some secondary gadgets, including Deployable Shields. (See the Operator break-down below).

Dependency on Ash and Zofia

The Utility Meta forced Attackers to heavily rely on projectiles (mostly explosive ones) in order to deal with the bulletproof utility.

In that regard, both Zofia and Ash (to a lesser extent) turned out to be mandatory picks. This lead to making these two Operators with an already solid loadout even more appealing.

Our goal is to have as much diversity as possible in terms of Operator presence, even in a competitive environnement. We are not ignoring this aspect of the issue.

We have also been working on another solution to let Attackers deal with Defenders' utility. That solution is not completely ready for now, but we are looking forward to tell you more soon™.

The newly added configurable shot will allow more flexibility, as Hibana will choose the number of X-Kairos to shoot.

She will be able to select between, two, four, or six X-Kairos per shot. We have made several changes to the gadget to make sure that the user experience stays smooth and self-explanatory.

We felt that we needed to provide attackers with more hard breaching options to even out the odds and reduce the pressure on the Attacking side. Our first step was to introduce the Secondary Hard Breach charge. The next step was to look at the ressource management of hard breachers. Until today Hibana had to waste quite some X-Kairos whenever a hatch or a Castle barricade had to be destroyed.

Following the Y5S4 update Hibana will be able to manage her ressource as follows:

She will now have the possibility to open one extra hatch, if her ressources are managed properly.

As we explained it in the introduction, the status of the utility meta is at the source of a number of issues. We believe that one way to tackle the subject is to look at how Defenders counter the attack.

Currently, Attackers suffer from being unable to effectively destroy a number of gadgets. We believe that Jäger, as well as Wamai are a part of the issue.

With this change, we expect the attacking side to be more effective when spending projectiles on the defending setup. This should reduce the number of projectiles needed by Attackers and open opportunities for other secondary gadgets and Operators.

We also expect Jäger to be a bit closer to Wamai in terms of presence, as the former is incredibly popular.

Echo has been targeted by Operator bans since those were introduced. The feedback we gathered from the Community indicated that the Yokai drone was a constant source of frustration.

We consider that its cloaking ability played an important role in that perception.

We also noticed that Echo turned out to be one of the most problematic Operator in pro play for many teams.

By removing the Yokai drone invisibility, we hope to reduce the Operator ban rate in Ranked as well as in pro plays. Additionally, the skill ceiling required to use the drone effectively should be increased.

Echo mains will have to think twice before placing their drones. Using the ultrasonic burst should also be riskier, more difficult but also more rewarding.

We also expect attacking teams to be a little less reliant on IQ, as she is not a mandatory pick to deal with Yokai drones.

As for the secondary gadget, the Japanese Defender will have to spend more time using his drone.

We felt that giving him a deployable shield to protect himself is useful and makes sense. His Impact Grenades may also be an interesting alternative for players versed in Impact Tricking.

Ash boasts a very strong presence and currently is one of the best Operator to counter Jäger and Wamai. She has a central role in the current utility meta and we needed to have a closer look at her.

We would like players to focus on her Primary Gadget and incentivize the team play. The utility she brings is very important, and we also need to provide attackers with more explosive projectiles to deal with the defending setup.

By removing the Stun Grenades, Ash won't be able to deal with the projectile catchers as easily, she goes down to three throwables (from 5). The extra Breaching Round should increase the number of utility she can destroy.

While we understand that it can be perceived as strong reduction of her capabilities, we are mainly trying to redistribute the utility she brings and to tone down her entry-fragging aspect.

Dokkaebi suffers a bit from a low presence, she is an Operator that brings intel already. By giving her (back) frag grenades, we want her to be able to destroy bulletproof utility.

She brings a lot of intel by taking control of cameras and by tracking down enemy roamers with her Logic bomb. Now, thanks to her newly added destruction ability should help speeding up the execution on the attacker side even more.

Again this change is part of our overall reflection on the current utility meta, that we will keep an eye on it during the next Season onwards.

Twitch has seen her presence reduced over the last few seasons, as the F2 is not performing as well as it used to.

By adding Stun Grenades to Twitch, we are aiming at making the French Attacker a better utility denial than she is now and to boost her presence.

The arrival of the Surya Gate may be problematic for Twitch, as she may not rely on as many projectiles as other Operator specialized in utility destruction.

Stun grenades may be a better option than Breach Charges to make sure that she can effectively use her primary ability.

This change is entirely focused on Pro Play, as Ranked and Casual players always prefer using the C4 as a secondary gadget.

However, the impact of her Deployable Shield in competitive play has been the source of many feedback and discussion.

Once again, this change is part of our intent to reduce the overall amount of bulletproof utility.

We opted for Impact Grenades as a replacement, as it brings the possibility to remodel bombsites or to impact-trick.

Very much like Valkyrie, Wamai was identified as a source of discussion for Pro Players and analysts.

His ability to rely on both a Deployable Shield, as well as his ability to deny throwables made him an extremely strong Defender that caused multiple issues to the Attacking side.

The replacement of his shield by Impact Grenades should partially address the concern.

We consider that impact grenades may give him a mobility boost. Given how flexible MAG-NETs deployments are, he could potentially roam slightly more than prior to this change.

Zero was released with a strong kit and we realized that he was able to be very autonomous and did not need to rely on his teammates as much as we would like to.

The combination of a primary gadget having projectiles with Frag Grenades appeared too effective. We are aiming at making him more support-focus, we want him to deny Defenders' gadgets, flank watch and help breaching reinforcement.

Zero relies on a strong primary weapon and we are confident he will continue to perform well.