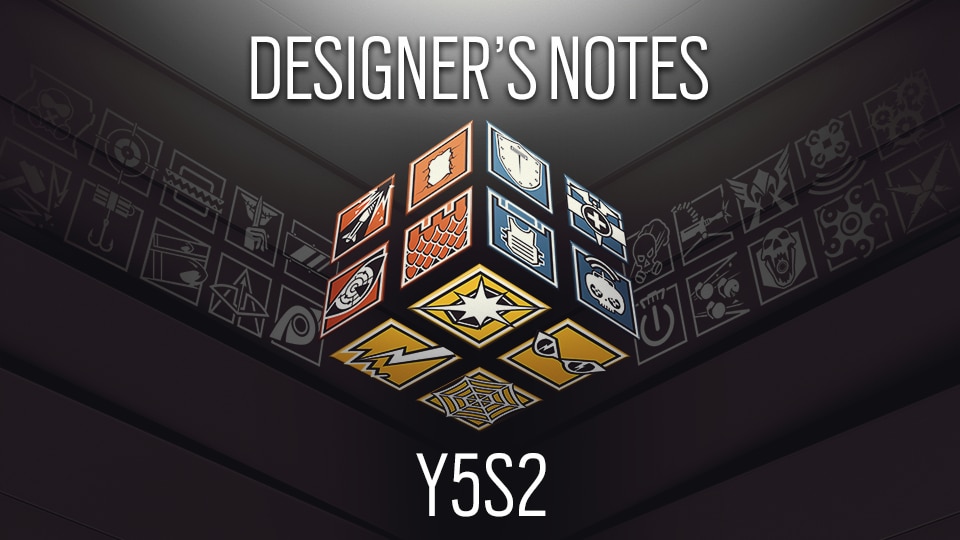 Balancing changes are data and feedback informed. Several teams in contact with various segments of our community, gather and compile both data and feedback to provide guidance to our designers. We are about to give you an insight about future changes and the reasoning behind them.

The new thrown sticky gadget is an essential intel-gathering tool, and it works just as well for anchors as it does for roamers. It will be triggered by any attacker entering its detection field.

One of the key factors behind the creation of this gadget is that we felt that we needed to have a "hands off" gadget able to provide audio intel. We consider this new addition as a variation of the Barbed Wire which tends to be used for intel-gathering more than for his crowd control aspect.

Having a gadget not requiring active interaction to trigger its effect was the main goal, it will therefore work differently than Bullet Proof Cameras for instance.

We believe that we have found a good balance between the range of detection and the volume of the sound emitted by this gadget, we are curious to hear your feedback from the Test Server.

Many operators will see their secondary gadgets reshuffled:

Motivation behind the change: Low popularity of the weapon and technical issues.

According to our data, the ACS12, the other primary option for G.I.S operators was barely picked (+/-1%). The community preferred the versatility and the outstanding performance offered by the Alda and the Mx4.

The ACS12 was also known for creating performance issues on our end, and it appeared necessary to come up with a solution.

The switch to slugs should affect the auto-shotgun ability to remodel bombsites and make this weapon a bit closer to Kaid's and Goyo's TCSG12.

We do not expect this weapon to become overly popular. We expect people to notice the relatively low recoil at first, but we consider it to be needed to find the right balance. In any case, we'll keep a very close eye on its performance, and we will be ready to reduce its damage if necessary.

Population targeted by the change: Top ranked and esports.

Motivation behind the change: Reduce frustration.

We have experimented various crowd control effects and the sensitivity modification continued to be a constant factor of frustration. Given their relative popularity, this feature turns out to be a regular source of frustration. We have decided to remove the sensitivity modification to partially address the issue in top level plays. Ela's performance and popularity might be impacted more strongly than Zofia's. We will keep a very close eye on them to reevaluate the change if needed.

Motivation behind the change: The concussion effect is not consistent across all abilities and the camera roll is not intuitive enough for newcomers.

Echo remains one of the top banned defenders in ranked across the last seasons. He is both frustrating to play against and very powerful. Pro players seem to consider that what matters most is the Yokai's invisibility as well as his capacity to perform plant denials. However, they recognize as well that the camera roll effect being tied to the movement of the Operator does not seem logical and ends up being frustrating. These changes should lead to less frustration and should help newcomers to understand how the Sonic Burst concussion effect works. We will keep an eye open on the feedback from this change, we want players to be able to differentiate a Sonic Burst from other concussion effects.

Removing the deployable shield from Echo's load-out is a way for us to continue reducing the amount of utility in esports matches. We continue our efforts to reduce the presence of these shields to an acceptable level. We consider that impact grenades should be a decent alternative for the Japanese defender.

Population targeted by the change: Casual and top ranked players.

We would like to make Finka’s ability a bit more meaningful and remove the player's hesitation whenever an ally is in a DBNO state. After this change, teammates will be revived with 50 hp (30 base HP + 20 Temporary HP from the boost). We hope this will slightly increase her presence and win delta to make her a viable support in attack.

Finka has been discussed as well during Pro Workshops. We have noticed that the recoil cancellation when under Finka’s buff is perceived negatively, as it interferes with muscle memory. It is too early to say if we are ready to act on that specific aspect, but we always keep an open mind and will reconsider for future updates. The addition of Melusi's gadget might open a spot for Finka in esports play.

Motivation behind the change: Low presence, and low win delta.

Kali was designed to offer an alternative to Thatcher, we are exploring what levers could be used to try to make her a more viable option.

We intend to address Kali on two different levels, her load out and her ability. We initially wanted to replace the CZ75, but feedback has been heard and we decided to add another option by offering the SPSMG9 as an alternative. We hope that this new sidearm will offer more flexibility to the Nighthaven CEO, in terms of gunplay. We also would like to try and make the CRSX300 a bit more easy to use. We are very much aware that this gun is also a strong source of frustration for defenders. We are going to proceed carefully in that aspect and reduce the screen climbing after a shot.

We are also looking at improving her gadget. We want to adjust the fuse time to make it a bit more challenging for Bandit mains to pick up their batteries. Pro players also suggested that the Lance is somewhat not efficient enough against Kaid's Electroclaws and that she often requires the assistance of IQ. Again, we are keeping options open and would like to monitor the impact of the validated changes first, before exploring more options.

Motivation behind the change: Lack of options for Nomad and Kaid in terms of secondary weapons.

Kaid & Nomad could only rely on the .44 Mag Semi-Auto as a sidearm. This is a very particular gun, due to its built-in sight, that's why we wanted to offer more options. We are also trying to see if more people would opt for the AUG instead of the TCSG12 with Kaid, if they could rely on the revolver which brings a (limited) destruction aspect.

Motivation behind the change: Low presence and win delta.

As much as Oryx seems to be great at creating wide rotation holes, his ability was somewhat limited by the quite high subsequent damage taken. We would like Oryx players to have more opportunities to use the ability as they see fit, whether during preparation phase or against other players while roaming. Pro players' feedback indicates that 5 hp sounds like better amount. We will still keep an eye on his efficiency when preparing bombsites as he could have become a bit too efficient in that regard.

The Proximity Alarm seems also to be a better fit for a roamer and should improve team play, as it is a good gadget for intel-gathering and covering flanks.

Our discussions led us to choose to replace the Bulletproof Camera instead of the Barbed Wire as those have a higher pick rate. It made more sense to keep a popular secondary gadget when our goal is to increase the overall presence of the Operator.

Oryx's MP5 will now have an angled grip. Our data indicates that the weapon does not perform as well when deprived of an ACOG. It is a way for us to increase Oryx's swiftness and mobility. We also considered adding the attachment to Rook, but that was deemed as too powerful and quite scary.

Motivation behind the change: Ying feels too oppressive, frustration generated by a feeling of powerlessness against Ying. 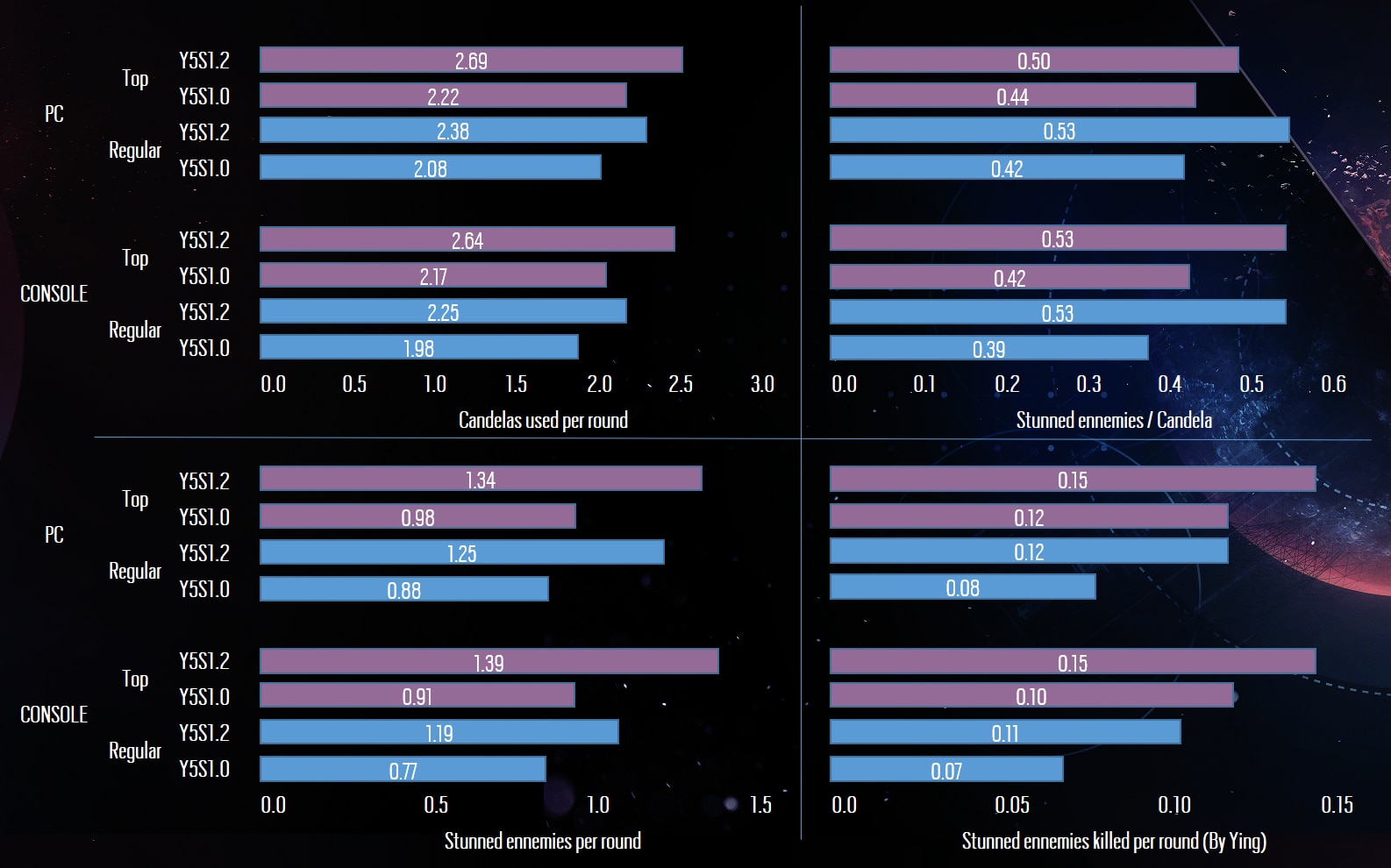 Ying was buffed several times during the last few months. During Y4S4.3 we added an extra pellet to her Candela, and changed their dispersion to increase the gadget reliability. According to our data, this change had little to no effect on Ying performance and popularity.

The latest balancing patch included controversial updates, including a significant buff for Ying. We believe that the combination of these two buffs have led to create an over-performing attacker. Our data analysis team was able to confirm a steep increase in the number of Candelas used across the casual and the top ranked populations. After gathering feedback and additional data, we decided to reduce her number of Candelas by one. We are aware that Ying has become better in terms of gunplay and that she is still able to burn ADS quite effectively thanks to her smoke grenades. As always we will continue to keep a very close eye on her performance to see if further tweaking is needed.

Population targeted by the change: Casual.

Motivation behind the change: Low presence, increase the surprise effect on defenders.

Amaru is mostly used in Quick Match. Despite offering unique tactical opportunities, her ability is not comfortable to use. We consider now that the she is too predictable, and that she cannot really use the hook to her own advantage. We would like to reduce the time needed for her to recover after using her ability. Breaching barricades upon direct contact should also provide some audio and visual cover. She will now be less exposed and could surprise opponents a bit more.

We don't expect Amaru's performance to improve too drastically, our goal is to improve her overall presence.

Try out the latest Rainbow Six updates on the Test Server and earn an exclusive charm through the BugHunter program.