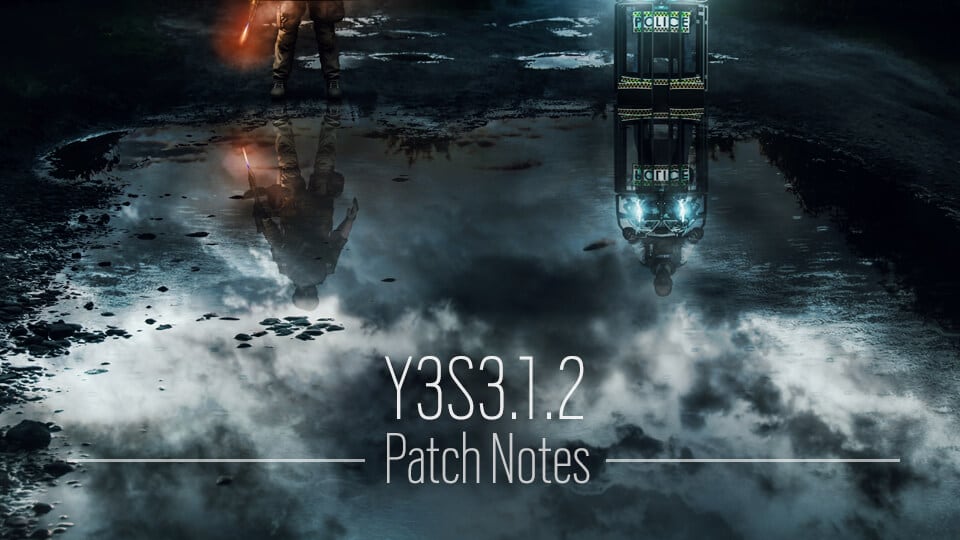 This patch will address a number of major exploits such as the deployable shield vaulting issues, the invisibility glitch, and the washing machine glitch. The Y3S3.1.2 patch will be deployed this week for PC. Console deployment of these bug fixes will come later in the month with the balancing changes, and will be a part of the Y3S3.2 patch.

It is now impossible to install deployable shields in front of windows in a way that would block vault or rappel in. Trying to do so will result in deploying the shield forward or backward depending on the player position, in a way that will always leave enough room for vaulting or rappelling in.

Fixed – The operator is invisible when players load into game.

Fixed – Pistols have their reticle misaligned with the center of the screen while shooting.

Fixed – No toggle for Montagne and Pulse special abilities (now comes with toggle).

Fixed – While prone, using melee and standing up will switch the knife animation to shield.

Fixed – The Stun Grenade VFX can be cancelled under certain conditions.

Fixed – The squad leader remains alone in a match after one squad member leaves when the leader starts the match.

Fixed – End of round timer does not stop when initiating the defuser plant at the last moment.

Fixed – Red Dot scopes have thickened texture on the lens while ADS.

Fixed – Valkyrie Black Eye can see through the ceiling when placed on in a spot on 2F Bank.

Fixed – Attacker drones can see through the ceiling underneath 1F Lobby and Bar.

Fixed – Drone has no collision with the terrace edge from West Front Yard.

Fixed – Equipping a shield drops the fps by 10–20 on Hereford Base.

Fixed – Unstable FPS in Hereford Base.

Fixed – Players can hide under a desk in 1F Prep Area.

Fixed – Defuser cannot be picked up after being dropped between the wall and the ammo box in 1F Garage.

Fixed – Defuser cannot be picked up after being dropped between the wooden planks located in EXT Barnyard.

Fixed – Thatcher's EMP grenade does not turn off the faux volumetric glow from the ceiling lights in EXT Barn.

Fixed – Players can clip inside a wall using a deployable shield at 2F Workshop.

Fixed – Players cannot pick up armor plates if the armor bag is deployed on a kettle in 3F Cigar Lounge.

Fixed – Operators can get stuck inside a pile of boxes in 1F Office.

Fixed – Player can vault inside the washing machine on Oregon.

Fixed – If Buck mounts Tachanka's LMG Turret with the Skeleton Key on and leaves it, no interaction can be made with the turret afterwards.

Fixed – Clash can instantly go into ADS with her secondary after un–equipping her shield.

Fixed – Clash is not able to use Observation Tools while her CCE shield is extended.

Fixed – Instead of disappearing when Echo’s Yokai hover drone is disabled, the "Jump" button appears greyed out.

Fixed – If a disabled Yokai hover drone is picked up and re–deployed, it will still be in the disabled state when redeployed.

Fixed – Finka’s Spear308's damage falloff over distance is too high.

Fixed – Maverick’s blowtorch makes no sound on the first use on a wall.

Fixed – Blowtorch SFX persists after Maverick is killed while using it.

Fixed – Black Mirror can be destroyed from the other side of a reinforced wall.

Fixed – Mira can place her Mirror under another destroyed Black Mirror.

Fixed – Hibana's face appears washed off when equipped with the Yurei headgear.

Fixed – Holding down both gadget buttons and releasing them in a certain order switches away from Pulse’s Cardiac Sensor.

Fixed – The Chalkboard uniform for Hibana does not appear properly while in First Person.

Fixed – The observation tool icon is missing from the select spawn location screen for attackers in preparation phase in Ranked.

Fixed – A second "Gold Lion Chibi" will float next to the weapon it is attached to.

Fixed – Equipping a country flag charm on the SPSMG9 will also apply on Clash’s CCE shield.

Fixed – Chibi charms are not properly placed on Clash's CCE Shield in load out.

Fixed – Multiple charms are clipping through Blitz's and Clash's shields.

Fixed – Charms equipped on Clash's shield are not visible in 3rd person view.

Fixed – When Joining in Progress during a ban reveal, players will always see the blue smoke.

Fixed – During the ready screen, the sizes of the operator's cards are not consistent.

Fixed – The "Change floor" button is missing in the tactical map.