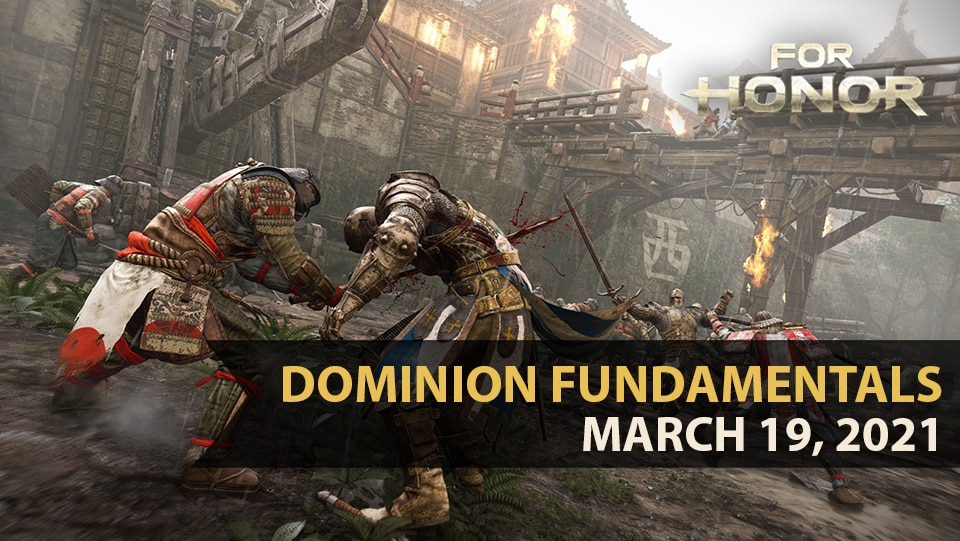 Hello new and returning Warriors! Welcome and welcome back. If you’re playing For Honor, you’ll likely try your hand at its most popular game mode: Dominion. As you learn, or relearn, For Honor, it may help to orientate yourself with the fundamentals of this game mode. You’ll likely be familiar with some of these terms, but if you want more details on what’s going on “under the hood”, this article should have you covered!

When your team is in Breaking, you can Rally your team by flipping Zones around the map, and maybe even put the other team into Breaking. Soft points are a crucial part of this back-and-forth that occurs at the end of Dominion matches.

Renown is earned in the same way as Game Score: killing enemy heroes, killing minions, and capturing Zones around the map. Revives are also a worthwhile source of Renown.

Feats are unlocked with Renown, so quickly gaining Renown (preferably before your enemy does) is crucial to winning fights. Sustaining Renown gain into the late game will enable you to use those deadly Tier 4 Feats in the game’s final team-fights.

Vanguards typically perform best in the minion lane.
Heavies gain the most for boosting a point.
Assassins tend to be feast or famine. They gain Renown most efficiently when they kill enemy heroes, especially in 1v1.
Hybrids don’t have any particular advantage relative to the other hero types.

Competitive For Honor tends to distinguish between in-game classes and the heroes’ roles. Game Score is earned most efficiently from the middle lane and its minions, so competitive teams usually feature a dedicated mid-laner. Aside from this player, the roles tend to be more flexible. Some choose good all-around roaming heroes; others choose heroes with powerful ganks.

As an example, take Shaman. She has an extremely good ganking tool and is often selected in this role at the competitive level. As an Assassin, her renown gain would be more efficient if she only fought 1v1. Classes and renown gain do not define your playstyle. Winning fights and gaining map control is more important than playing as your character class is theoretically supposed to. Assassins don’t need to hunt 1v1s for the entire match, heavies probably shouldn’t boost a Zone for minutes at a time if their team is losing the rest of the map, and Vanguards do need to rotate out of mid to heal.

Thank you for reading Warriors! We hope you can use this information to make good decisions on the battlefield and push your play to the next level.