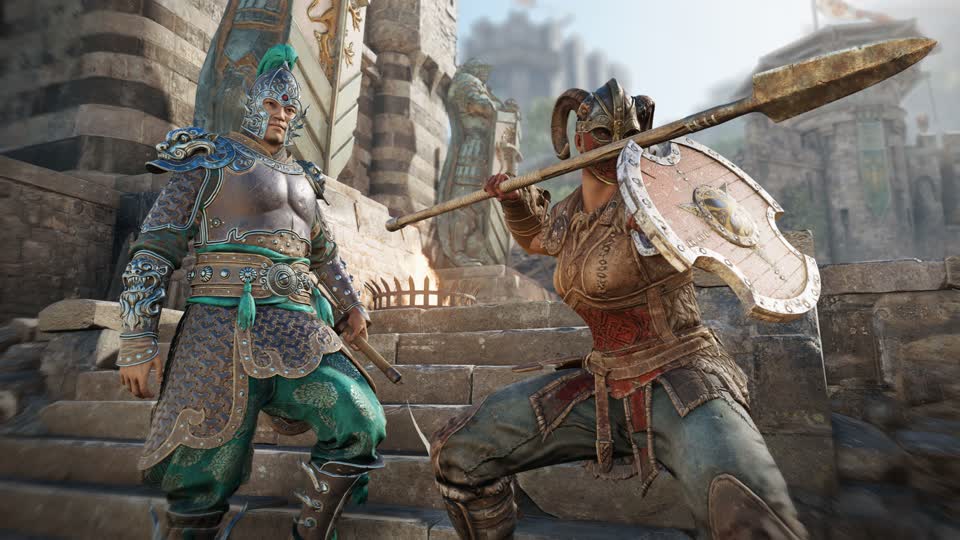 Starting September 15, a new Testing Grounds starts so all players can test incoming changes to Valkyrie and Tiandi. We will also be looking at a general change made to Counter Guardbreak which will be live at the start of Y6S3!

Let's start with the Valkyrie!

Valkyrie is one of our older heroes, and some aspects of her kit did not align well with how people are playing the game today.

We're addressing two issues here: Shield Crush was lackluster because it could be dodged at the same timing as the Heavy attacks that it was cancelling, and Shield Tackle was lacking in that it was too difficult to use as a defensive option, while being too predictable in its outcome.

By replacing Shield Crush with Shield Tackle, we're looking to give Valkyrie more ways to go into Shield Tackle, while giving her options to both defend while attacking and attack while defending.

Spear Sweep has a few issues: at 600ms, it was reactable, and since it could unbalance allies it make it difficult to use effectively for ganking.

We're adjusting these two values so it no longer is reactable, as well, as fixing the move unbalancing opponents who were in Revenge and had their Revenge Armor active. Finally, the follow-up to Spear Sweep did not respect the rules for heavy finishers in that it was not frame advantaged; with this change, Valkyrie can now use the move in 1v1 and keep the pressure going.

Those changes should help the Valkyrie position herself better in group fights and helps her chase enemies that would try to escape a fight.

The attacks being enhanced should also help the Valkyrie initiate her chains better.

Valkyrie's Heavy attacks had various issues; they were not moving forward enough, making Feint to Guardbreak miss under certain circumstances, and her Side Heavy attack trajectories were too small and made it too difficult to hit external opponents. We've adjusted these attacks to be more in line with how they should be performing.

We've also slowed down the chained Top Light and finisher Top Lights to be 500ms instead of 400ms - having a single direction be 400ms was not sufficient to work at high level, since players could just block top and react to sides, while at lower levels 400ms lights are too difficult to deal with, so we've normalized all of them to be 500ms.

Zone Attack did not perform as expected and with those changes and the new Shield Tackle it should be usable in more fight scenarios.

This should help Valkyrie initiate her chains from out of lock in a more natural way.

Tiandi is a strong character defensively, but was lacking strength offensively. With this revamp, we are looking to increase Tiandi's offense, while retaining the hero's strong defensive capabilities.

Palm Strike as a neutral attack did not work as an opener as intended - it is fully reactable at high level while being too strong at low level. With the new input, it should be consistent with other openers. As an added bonus, since it is now accessible on front dodge, players can use Tiandi's dodge cancels to go into Palm Strike at any point in their chains.

Palm Strike also had a unique Heavy follow up that was armored; at the timing it was set at, it was also impossible to parry when Palm Strike landed, which was not only confusing as there was no indication of it having that property, but also had a niche use in beating opponents who dodge attacked. As Tiandi is not meant to be a trading hero but more a dodging hero, we've removed this unique follow up and instead go straight to normal finishers, but Tiandi can still cancel the recovery of Palm Strike with a Dodge to beat dodge attack attempts.

Dragon Kick is one of Tiandi's most iconic moves, but wasn't performing as it was not dealing any guaranteed damage and was reactable. Since it is now feintable, Tiandi should be able to mix up opponents more effectively, and we've also added a new move that guarantees damage when it lands to make the move more useful.

Side Dragon Dodges are interesting moves with their extended Dodge properties, but due to their speed it was difficult to use them as counterattacks. At their new speed they should be able to be used to counterattack more effectively, but with extended dodge properties they became too strong, so we normalized these values.

It is important to note that the attacks can still be soft feinted into further dodges and can also still be feinted as usual.

Finally, we're doing some Quality of Life changes for Tiandi - having Side Finishers out of lock should give the hero a better ability to clear minions, Side Heavy Finishers should have proper trajectories to hit external opponents, and we've also removed the Stamina Damage and Pause from Tiandi's bashes to fit with our new direction for these moves.

In the current Live game, Guardbreaking is a great way to shut down offense as a Counter Guardbreak leaves both opponents at neutral frame advantage. When this occurs, the only safe way to attack is to perform a Light attack, as most other options will get beaten out by any player performing another Guardbreak. This caused any attack coming after a Guardbreak to become predictable and left the only viable option to be another Guardbreak.

With this change, the player who performed the Counter Guardbreak can now use more options, including Heavy Attacks, to beat further Guardbreak attempts from the opponent.

That's it for now! We look forward to your feedback, as usual, through multiple channels; we'll monitor social media and will send a survey to formally gather your feedback.

Be sure to leave feedback if you want to be heard