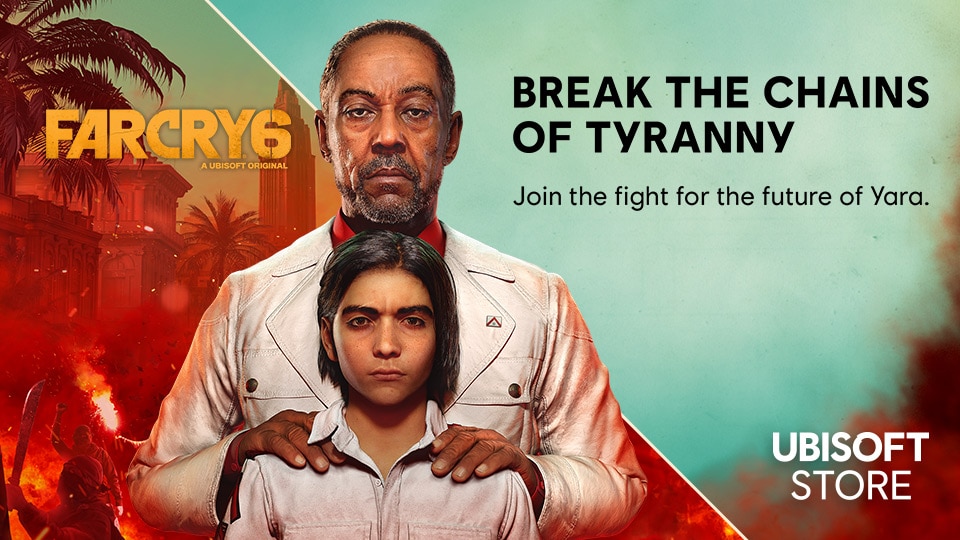 Your journey to bring revolution to the beautiful Caribbean island of Yara begins today with the launch of Far Cry 6. Available now on Xbox One, Xbox Series X|S, PS4, PS5, Stadia, Amazon Luna, and PC, the newest adventure in the explosive franchise pits you and the rebel guerrillas of Yara against the better-armed, better-equipped, and far more numerous forces of the dictator Antón Castillo (played by Giancarlo Esposito). Wield powerful improvised weapons and vehicles, enlist adorable and deadly Amigos to your cause, and explore the beautiful open world of Yara as you fight to end Castillo’s tyrannical rule.

The Ubisoft Store is your one-stop shop for all things Far Cry 6, including the Gold Edition of the game, which comes bundled with the Season Pass. The Season Pass will grant players access to the remastered Far Cry 3 Blood Dragon: Classic Edition, as well as three upcoming DLC episodes that cast them in the roles of legendary Far Cry villains Vaas Montenegro, Pagan Min, and Joseph “The Father” Seed. Upgrade to the Ultimate Edition to get Far Cry 6, the Season Pass, and the Ultimate Pack, which includes three bundles of in-game items: the Croc Hunter Pack, the Vice Pack, and the Jungle Expedition Pack.

You can also check out the Far Cry 6 merch section of the Ubisoft Store to find clothing and accessories to show your Yaran revolutionary spirit by, among other things, sporting the likeness of your favorite Amigo. Will you choose to rep Chorizo, the cute wiener dog who lures unsuspecting soldiers into deadly situations? Guapo, the crocodile with one gold tooth and a whole lot of attitude? Or Chicharrón, the murderous rooster whose bloodthirst cannot be slaked? Choose wisely, because just as you can only have one Amigo with you at a time in-game, you can only wear one of these shirts at a time in real life. (Don’t worry, there are also shirts with multiple Amigos if you simply cannot choose.)

Far Cry 6 is out now for Xbox One, Xbox Series X|S, PS4, PS5, Stadia, Amazon Luna, and PC (and is available as part of a Ubisoft+ subscription).