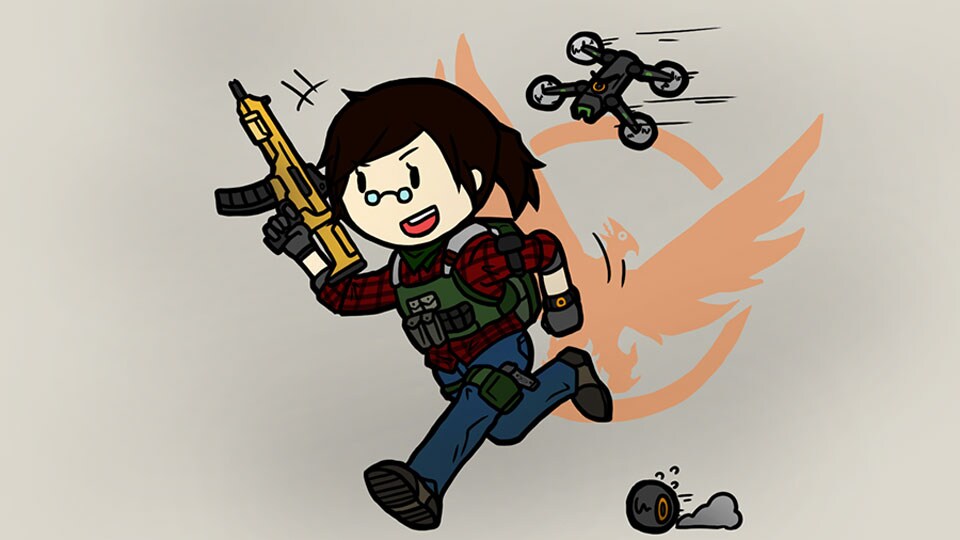 Today, we are kicking off another series of articles highlighting fantastic members of The Division community—SHD Spotlight. Similar to our Clan Spotlight content, SHD Spotlights feature community members on an individual level. We want to provide opportunities for players to share their creations, stories and connection to The Division brand. If this speaks to you and you want to be part of a future SHD Spotlight, reach out using the hashtag #SHDSpotlight!

For the first interview, we sat down with community member and artist, GrandarexAWD or Gran, and asked a few questions!

Grandarex is both a talented artist and active community member within The Division. Creating fantastic artwork and memes as a hobby, he picks up a pen with the sole goal of making people laugh. If we may say, you succeeded! Also engaging in discussions and asking questions about the game, Gran's passion for The Division is always bleeding through.

Gran began his journey at the very start of it all with The Division. As a fan of both modern third-person shooters and looting games, he was hooked after watching the first reveal trailer. Despite some ups and downs, he fondly looks back on Manhattan's adventures.

As a side note, he's also very proud of earning the Perfect Reign patch in The Division for completing all the Incursions flawlessly. It's definitely an achievement worth celebrating!

Gran's first piece of Division-inspired artwork was actually of his own Agent! In response to a period in between content updates, Gran drew a light-hearted cartoon to both brighten up his peers and showcase his Agent apparel on Reddit. It's safe to say it was incredibly well received, with players sharing how refreshing his content was and actually requesting artwork of their own. This piece of art inspired his comic series "Throwing SHD" that continues to this day.

It never even occurred to me that I should draw Division Comics. This first fanart was just a one-off thing in my mind. But I really have to thank the Division community and the subreddit for helping me kick off this series and supporting me all the way through! - GrandarexAWD

Gran's inspiration is derived from all sanctions of the community. First up are those who share in-game screenshots using photo mode. The casual and hardcore players also are inspiring through their questions, epic moments, and achievements. The cosplay community is a huge contributing factor as well, with their incredible crafts and creative minds. Even those who shed light on community issues through toxicity and memes are a source for Gran's inspiration.

These are the people that make up the community and they're all important in this online ecosystem. Despite being very different in terms of the content that they produce, these groups of players all have one thing in common – we all care about the game that we play. We would not be here if we didn't! - GrandarexAWD

Last but not least, inspiration for Gran's artwork can be derived from the game itself. With the choice to play The Division in whatever way you decide, the team is always surprised by the experiences the community shares while venturing through Manhattan or D.C. For Gran, it's the antics experienced as an Agent that also inspire fanart and memes.

We asked Gran if he had any favorite pieces of fanart to date, and he couldn't choose just one! The first, "The LMG Experience", is actually the first episode of "Throwing SHD". While the comic was an introductory concept, it remains Gran's most popular to date and he aims to create new concepts that bring the humor and popularity to the next level.

To view the full comic, click the image above.

Next up is an entirely new concept that definitely caught our eyes as well—"Project Viper". Gran wanted to experiment with combining the Division universe with other cultures, and he landed on Japan's samurai culture. As his most ambitious project to date, countless hours over the course of several weeks were spent producing the final product. We absolutely love the integration of Japanese culture into the SHD masks, and this piece is definitely one of our favorites too.

Project Viper was no easy task, and so we wanted to know what exactly goes into crafting these pieces of artwork for The Division. For Gran, it can be divided evenly into two sections—project planning and the actual drawing process itself. Crafting a unique and interesting idea is half the battle and visualizing how to present an in-game antic or experience can be challenging. Luckily for Gran, he plans every comic panel while going about everyday life—whether that's working, cooking, cleaning, etc. As far as the drawing is concerned, it can be both mentally and physically exhausting to perfect. It's very uncommon to produce these fanarts at a frequent pace as it boils down to: sketching, clean lining, color, additional effects, and finally the word dialogue.

To view the full sketch, click the image above.

If you're interested in any of Gran's work, you can find more at grandarex.myportfolio.com as well as on Twitter @GrandarexAWD. Drop him a follow as new artwork is debuted on Twitter for the rest of the community to see!

Gran absolutely accepts requests from the community! Consider having a clear vision of what you're requesting alongside an openness to communicate and collaborate before submitting a request. If you're interested, contact Gran on Twitter or drop him an email @ gdrx.true@gmail.com.

We would like to thank Gran for answering our questions about his work, and he'd like to give a shout-out to all his supporters for the love and positive comments. Stay tuned to Gran's social channels as another episode of "Throwing SHD" is coming soon!